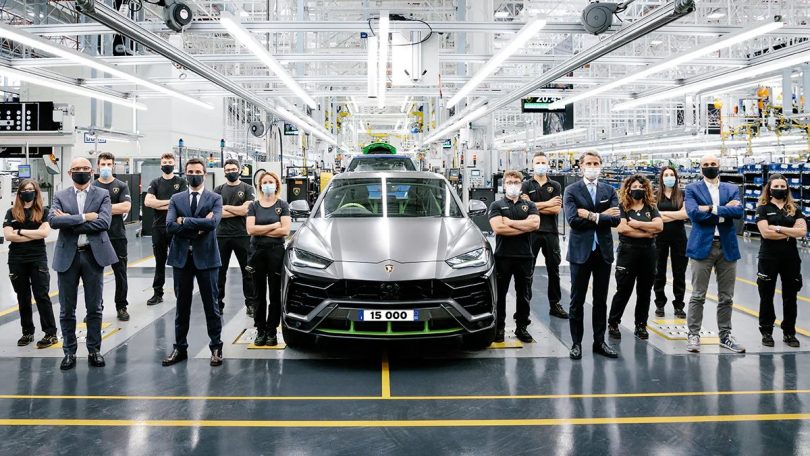 Lamborghini Urus makes history, becomes the highest-produced model in the company’s history. The SUV’s 15,000th unit rolled out of the manufacturing plant within just three years since it made its debut in the market. This proves how popular this supercar has been throughout the world. Urus is the epitome of practicality with sportiness, which is also one of its main USPs.

The 15,000th unit, which rolled out from the manufacturing facility, had some special touches to celebrate the achievement. On the exterior, the car was finished with the ‘Graphite Capsule’ set of colours. The shade of the vehicle is Grigio Keres Matt with subtle touches of Verde Scandal. The interior of this 15,000th unit came with a dual-tone Nero Ade/Verde Scandal scheme.

Why Is Urus So Much In Demand?

To answer this question, we have to look into the current trend in the automotive industry. Across the globe, it has been noticed that the demand for SUVs is at an all-time high. Be it an entry-level car or a luxury car, and customers want that in the SUV body type. And what happens when a luxury car manufacturer like Lamborghini makes one? The sales hit the roof. Along with this, Urus is so much more practical without any compromise on the performance whatsoever. This car can seat four people at utmost comfort and also has a 616L of cargo space which is more than enough for weekend trips.

Urus Selling In Good Numbers In India As Well

One of the reasons people are reluctant to buy luxury sports cars is the roads in our country. Traditionally, all the luxury and sports cars stood quite low to the ground. Thus, making it quite challenging to tackle the potholes and high-speed breakers. But, SUVs do not face this problem, and hence we see a lot of Urus is getting an overwhelming response in India. Back in March this year, Lamborghini had reported that they had sold over 100 units of Urus in the Indian market, with 50 per cent of the sales coming from the 2nd-tier cities.