Suzuki recently launched the 2020 model of the popular Hayabusa but the bike failed to get a BS6 emission update. The new update was cosmetic and the bike only came with new colours and graphics but its power plant remained unchanged and is still BS4. The new colours for 2020 are Candy Daring Red and Metallic Thunder Grey.

Now, according to a report, the brand has completely sold out its inventory and may not be upgrading the motorcycle to BS6 standards. The company has already stopped production on the Hayabusa and this could be the last of it. The Suzuki Hayabusa was brought to India in the form of Completely Knocked Down kits and assembled locally.

The Suzuki Hayabusa features an aerodynamic body to minimize wind resistance and the bodywork protects the rider from winds at high speed. The Hayabusa also features a wide rider’s instrument cluster that consists of a digital multi-information display in the centre, large analogue speedometer and tachometer and analogue fuel gauge and temperature monitor flanking its sides along with a number of telltale lights. The Hayabusa comes with a projector lamp on the front and an LED tail lamp unit on the rear. The motorcycle gets wide ergonomic semi step-up seats and large dual exhausts.

It is powered by a 1340cc 4-stroke four-cylinder liquid-cooled DOHC engine with Suzuki Dual Throttle Valve (SDTV) throttle bodies and 32bit computer-controlled twin injectors per cylinder. The 4-cylinder engine employs a ram-air downdraft air intake system and hollow double over-head cams that operate four valves per cylinder made out of Titanium. The engine produces 197 hp of power and 155 Nm of torque matched to a 6-speed constant mesh gearbox.

In terms of its mechanical hardware, the Hayabusa features an aluminium frame that rides on fully adjustable upside-down KYB 43mm diameter front forks with DLC (Diamond-Like Carbon) coating and a monoshock suspension with adjustable coil-spring on the rear swingarm. The braking power comes from Brembo radially mounted monoblock hydraulically operated callipers on the front with dual discs and a single disc with a hydraulically operated calliper on the rear armed with a lightweight ABS unit that ensures that the wheel does not lock-up during emergency braking situations.

Suzuki has not yet confirmed that it will be discontinuing the Hayabusa but if the reports are true it will leave a big gap in the hyper sports section where it competes with the Kawasaki ZX14R. Suzuki still continues to sell the V-Strom 650 XT and the GSX-S750 in their Big Bikes portfolio which are expected to be upgraded to BS6 before the norms roll out on 1st of April. 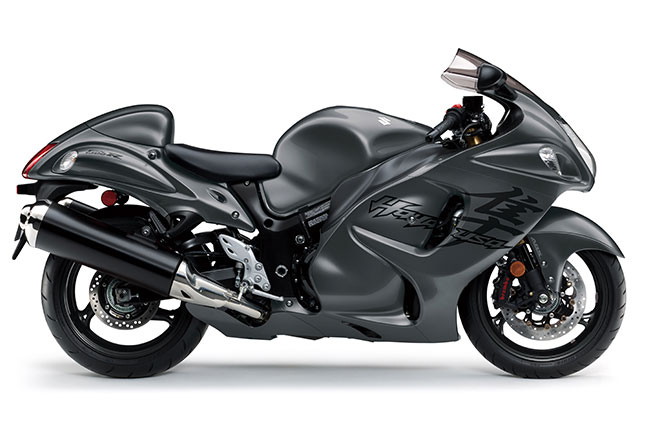