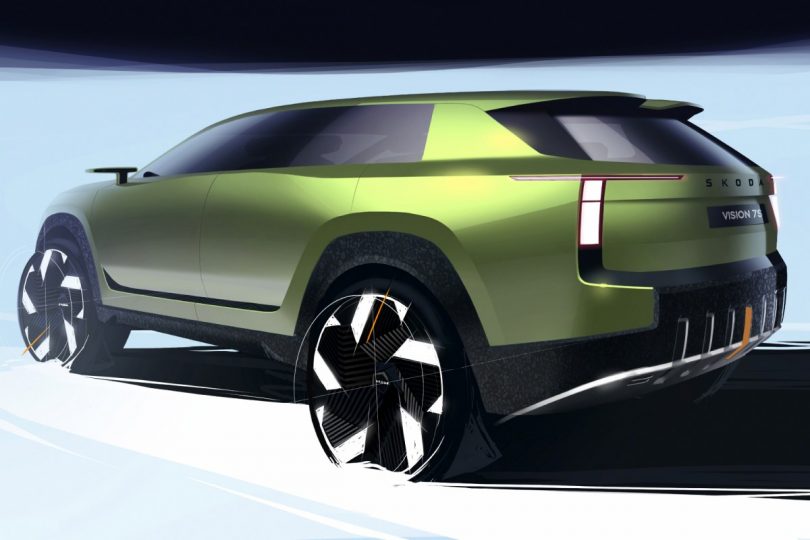 After releasing two teaser images of the VISION 7S concept’s interior, Skoda has now released exterior design sketches of the 7-seater electric vehicle. Skoda had earlier announced that the VISION 7S would preview its new design language. The Czech carmaker also says it draws inspiration from its traditional values of robustness, authenticity and functionality. We won’t have to wait long to see the VISION 7S. According to Skoda, the world premiere of the concept car will take place on 30th August 2022.

Skoda VISION 7S Exterior Design Teaser – What Do We See?

The exterior design sketches Skoda released show an upright and butch-looking SUV. On the front, it gets a design unlike any of the current Skodas. Firstly, the grille, which is much wider and flatter. Instead of chrome like on some Skodas, the grille is dark and closed. As for the headlights, Skoda positioned the headlights at the edges and has two vertical rows, one above another. On top of the headlights sits the LED DRL strip, which extends beyond the headlight cluster and forms a ‘T’.

The VISION 7S continues to sport the known sharp bonnet lines. The front bumper has no air inlets on the sides. Instead, it gets 7 vertically arranged air inlets in the centre. The centre air inlet gets a cover in a contrasting orange colour. There’s also an aluminium skid plate.

On the sides, it gets large aerodynamically-optimised wheels. Skoda says these further emphasise its visual appearance. The sides of the VISION 7S have clean lines with only one prominent shoulder line. Though it is an SUV, the roof gently slopes towards the back.

Skoda VISION 7S Concept Car – What Do We Know?

The brand first announced at its Annual Press Conference back in 2022 that it would introduce a new design language for its upcoming models. The preview for this design language is the VISION 7S concept. Since then, Skoda has released two teasers of the VISION 7S. Both of the previous teasers showed us the interior of the electric SUV.

The first teaser showed the generous space it will offer and the minimalistic design. Being a Skoda, it will come with ‘Simply Clever’ features such as different interior configurations and an integrated child seat.

The second interior teaser showed the steering wheel design, free-standing touchscreen display and the dashboard. The Skoda VISION 7S is also the first model from the brand to feature a vertical infotainment display. The brand will also provide storage compartments below the air-conditioning controls for smartphones.