Skoda Auto reveals the design sketch for the brand’s upcoming Kushaq SUV that will make its world debut on the 18th of March 2021. The Skoda Kushaq was showcased at the 15th edition of the Auto Expo 2020 in Delhi, India and the interiors of the Skoda Kushaq are based on the concept study and features a new-generation multilayered design with clean lines. The interiors of the Kushaq also claim to be roomy with a large amount of light passing through and comes with a bunch of smart storage points.

The design renders show a multilayered dashboard with clean lines along with a wing-like centre fascia that reverberates with the new-generation butterfly grille. The brand has incorporated the exterior paint colour with interior trim that appears on the dashboard fascia, centre console and door trims. The dashboard uses a minimalist approach and comes with a 10-inch free-standing infotainment display acting as a central element. The driver’s display appears to be fully digital and is recessed into the dashboard and the Kushaq will get a new-generation two-point. steering wheel along with mounted controls and ergonomic thumb contours. The centre console features feather touch controls a few hotkeys for various functions. Multiple upholstery layers can also be seen in the official design sketch.

‘The Skoda Vision IN

At the 15th edition of the Auto Expo 2020 in Delhi, Skoda showcased the Vision-IN and the car SUV got an overwhelming response. On the concept car, Skoda used Kalamkari, a hand-print design traditionally used to dye cloth with natural colours. While the production-series car is based on a similar exteriors design the interiors are also not too far from what was showcased at the biennial event. A central character line that runs across the dashboard starting from the hexagonal air conditioning vents is just thinner than the concept study. The overall design is also similar to the one on the concept car along with Skoda’s ‘Simply Clever’ details.

The Skoda Kushaq is underpinned by the India-specific version of the MQB (Modular Transverse Matrix) architecture called the MQB-A0-IN. As a result, the Kushaq comes with a generous 2,651 mm long wheelbase. Powering the Skoda Kushaq will be a 1.0-litre Turbocharged Stratified Injection (TSI) turbo-petrol engine and another 1.5-litre TSI petrol engine that come with multiple transmission options. 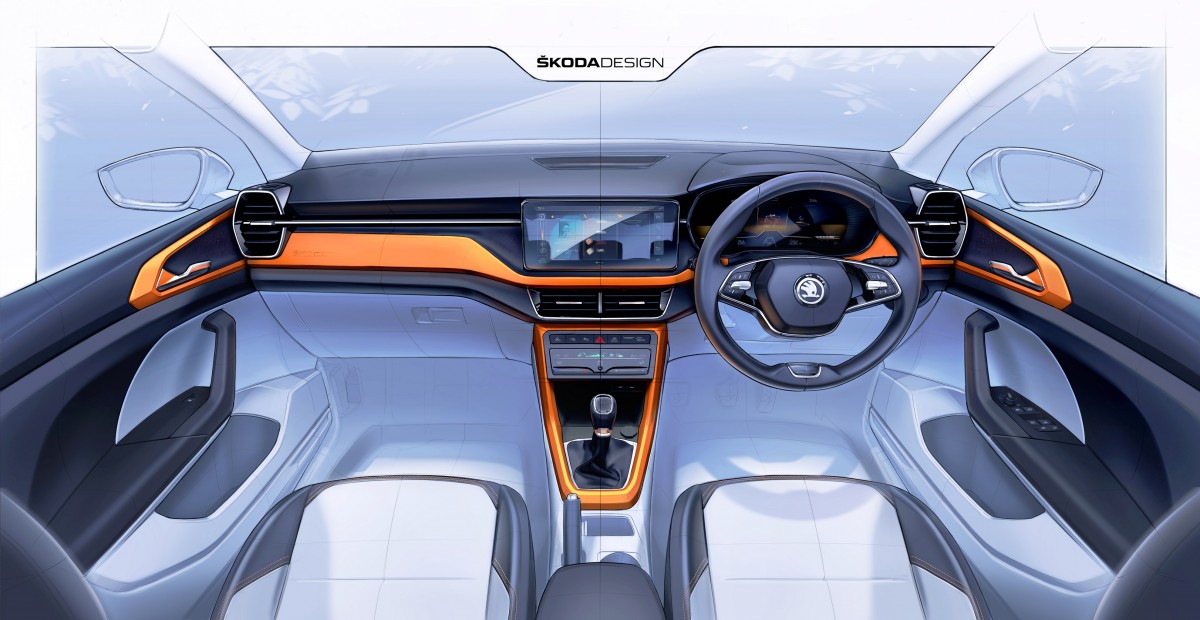