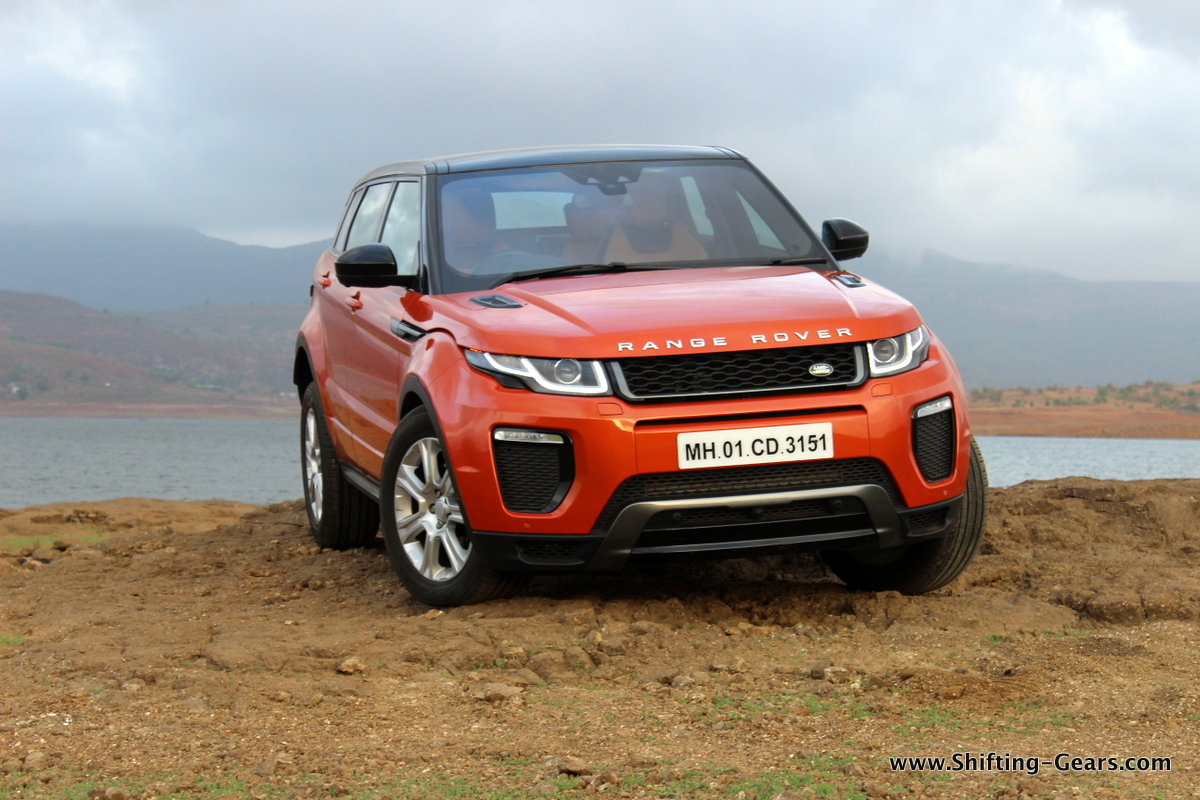 Every ten years or so, there comes a vehicle which is a total comeback from the cumbersome design of the company into an all new level of a breakthrough. The Range Rover Evoque is the one such SUV from the iconic British manufacturer who in the recent times has taken this boxy large SUV into an entire new design genesis.

Ever since its launch the model has remained immensely popular around the world. In India too this car has been the choice for the affluent masses who prefer to drive in something stylish as well as practically possible on our roads This car is surely a design breakthrough for Land Rover. With its aggressive front stance and its sharp angles along the trims, this is one hell of a good looking car and sure we had a great time test driving his summer in Bombay.

Exterior:
I personally believe that this is the most ultra-modern looking SUV in the world. It may have compact dimension and doesn’t have the road presence of a steed, but it sure is an eye catcher no matter whichever angle you look at it from. The new angry frowned LED headlights with the Range Rover typical signature grills along-with those large profile wheels make this Evoque a design icon. The new model has a reduced height line which makes the look like one of the sleekest smartphones there is out there. 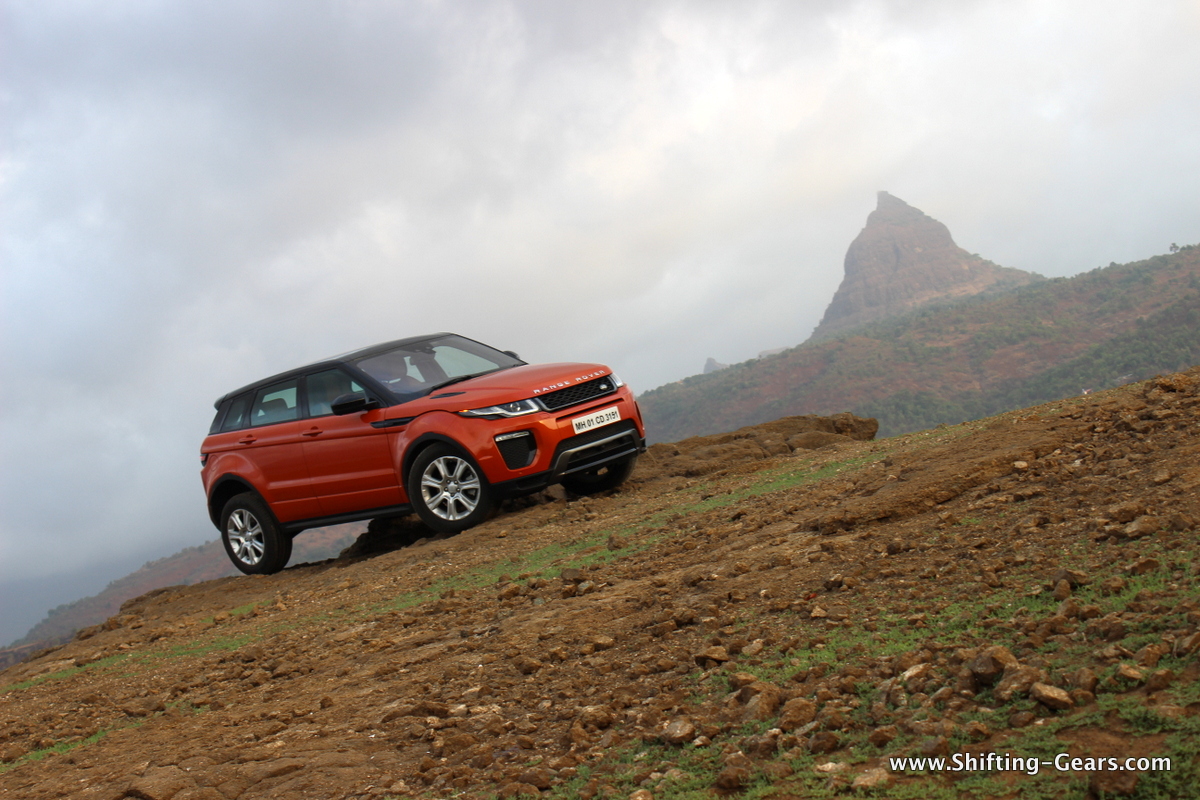 Range Rover have given this model a floating roof which enables the car to look strikingly different in two tone combination. The wheel arches are flared and the black combination side skirts come with a chrome accent. The rear tail lamps are the trademarked ones used by Range Rover and they have an incredible level of detail if you look at them closely.

The front and rear fenders are raised and have a bold profile. A kind of body member which urges you to drive confidently in Bombay. The one and only one thing which they could have improvised on is the exhaust tips. They have given a typical plain black exhaust but they could instead stuck to something like a twin chrome tip.

The best feature of this car is however the fact that is how Range Rover has given their customers the chance to customize and personalize the car in several ways just like the Mini Cooper.

Interiors:
One look inside the cabin and you know you are in a Range Rover. High end materials, smooth polished metal and fine trimmed soft leather are in abundance and the combination of ambient mood lighting makes you invoke that youthful spirit in you as compared to the earlier models. 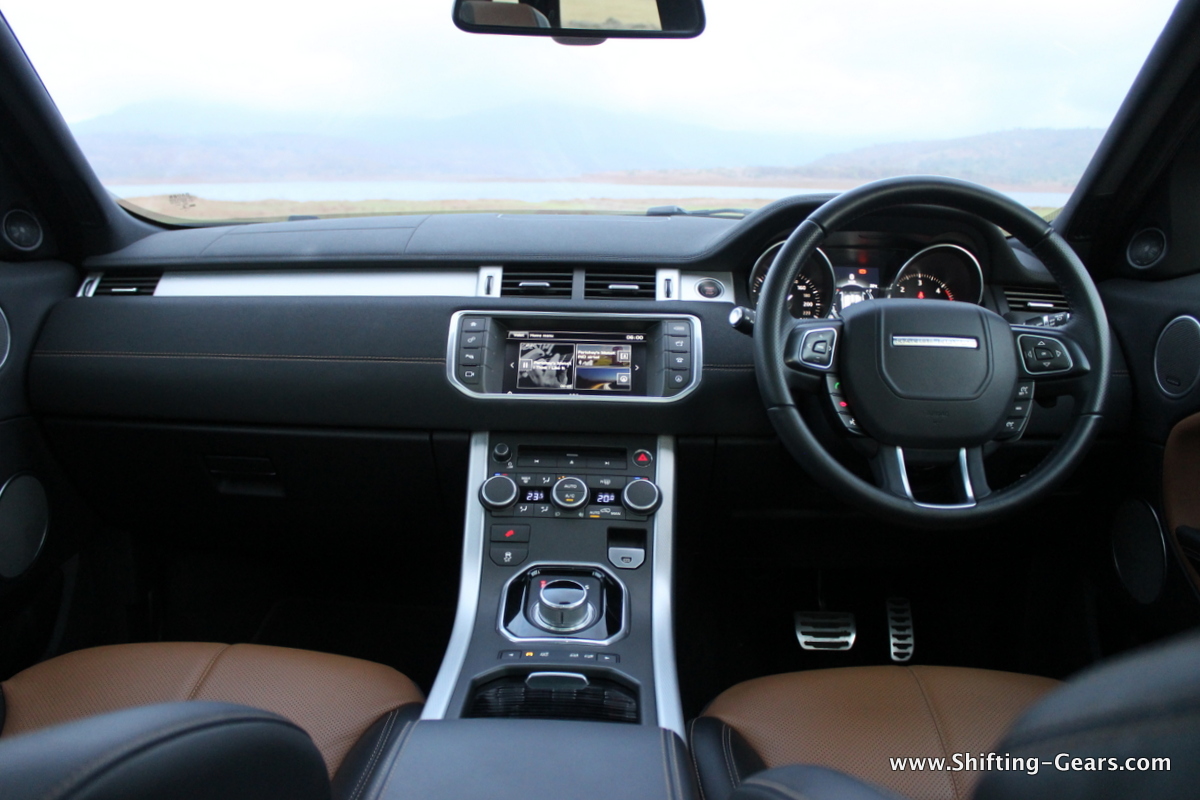 The center console has an eight-inch touch screen which controls most of the cars electronics and is a easy to use and understand system. The only problem this has is that it’s a touchscreen and you need to take your eyes off the road to operate it. I think the iDrive by BMW with its rotary knob is the best among these.

To make this car strikingly different from its rivals, you can now purchase this model with 2 options. A conventional 5 door car or a stylish 3 door coupe. The car retains its sporty attitude but with a few drawbacks. The rear headroom is severely limited owing to the roof line. We tested the 5 door model and the space in the car is average if not too uptight.

The front and elevated position of the driving seat gives this car a very good line of sight and great all round visibility. The rear windows are really small and highly perched and hence the visibility is hughly restricted. If you are to opt for the panoramic sunroof in these models, you’d get a cabin which is flooded with enough light but then again, the rear headroom suffers. 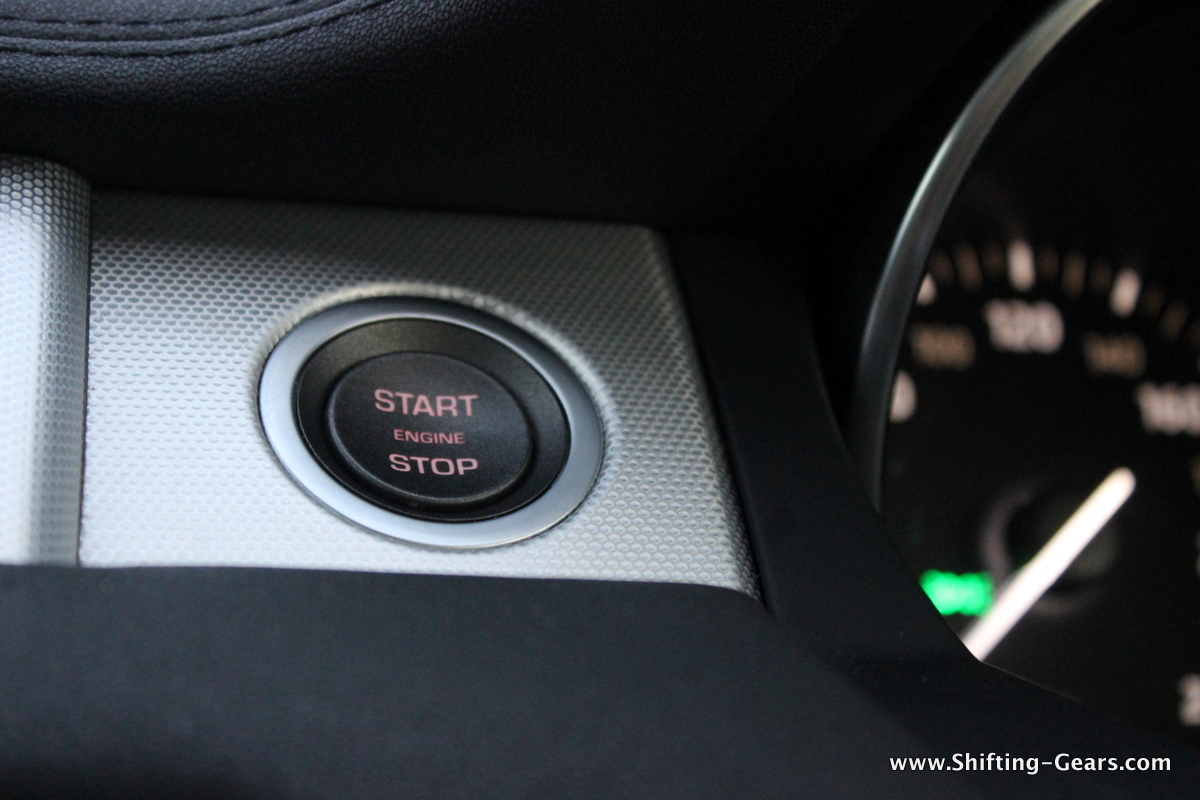 The 5 model has 575 litres of boot space, which is impressive for a crossover with little practical aspirations. Put the rear seats down flat on the floor and you get a maximum capacity of 1,445 litres and a flat floor.

As expected from a car which is so premiumly  priced, this car is loaded with a host of features and creature comforts. There is a reverse parking camera along with a park assist system that is quite handy considering you cannot see out of the miniscule rear window.

You also get a large single piece panoramic roof that adds a ton of drama to the car and seven shades of ambient lighting that add to the Evoque’s interior appeal. The car is provided with a speaker package from Meridian which are really powerful and something which I truly loved in this car. 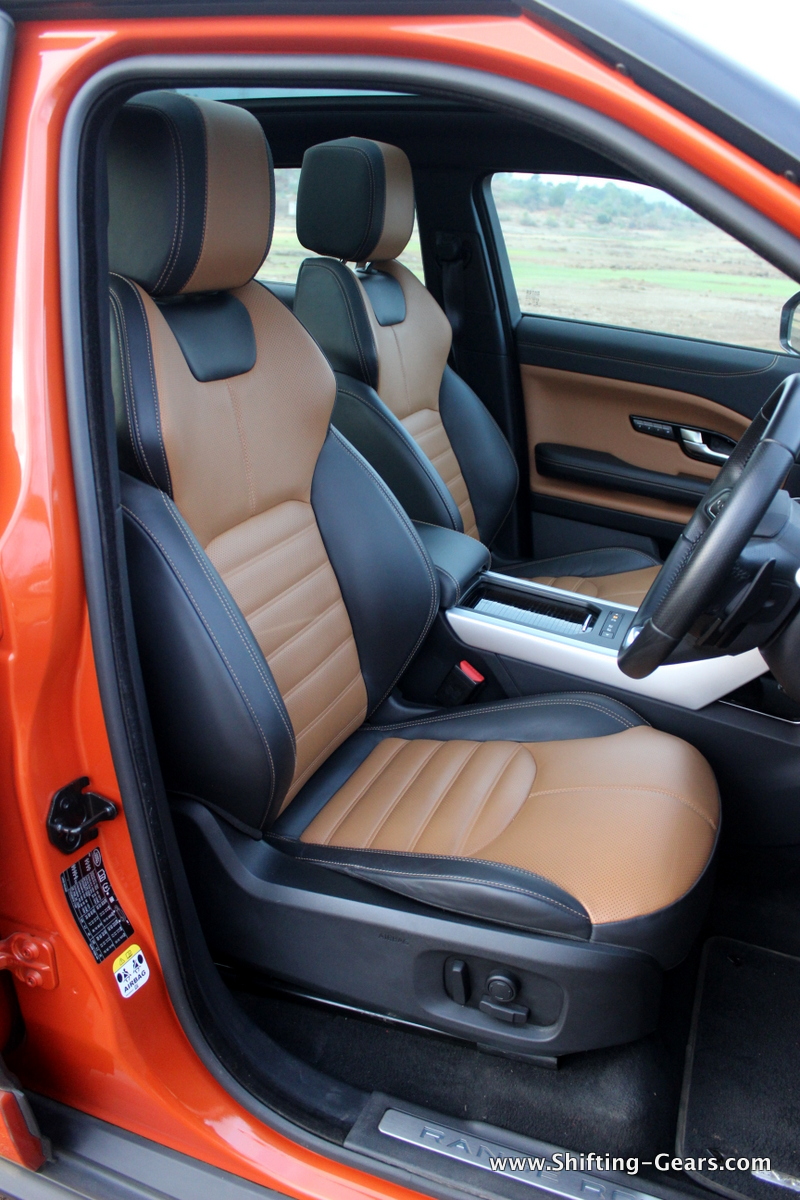 The door pockets are also quite narrow, so won’t swallow anything bigger than a standard 500ml bottle, while the glovebox is shallow and, with the owners manual in there, you’ll have little room for more than a bag of sweets.

Engine, performance & handling:
Ample amount of power and complete satisfaction. This is what you can expect from the Evoque. Range Rover is only launching the Diesel version in India which I believe makes sense. The engine is a 2.2 litre which works synchromatically with a 9-speed gearbox which produces 255 PS of peak power and a staggering 420 Nm of peak torque. This is the first time ever since their 2015 model that they have launched the 9-speed ZF automatic gearbox. This has made the car more responsive but it has its own drawbacks. In its D mode the gears take time to run through the shifts should they be asked to downshift with a sudden level of urgency. But once you switch her into the S mode, things get different. The gearshifts get liquid and the car has a whole new response system all together. And yes, fancy driving like a racer in your SUV ? You can always use the flappy paddle shifters. To sum it up, it wouldn’t disappoint you at all. 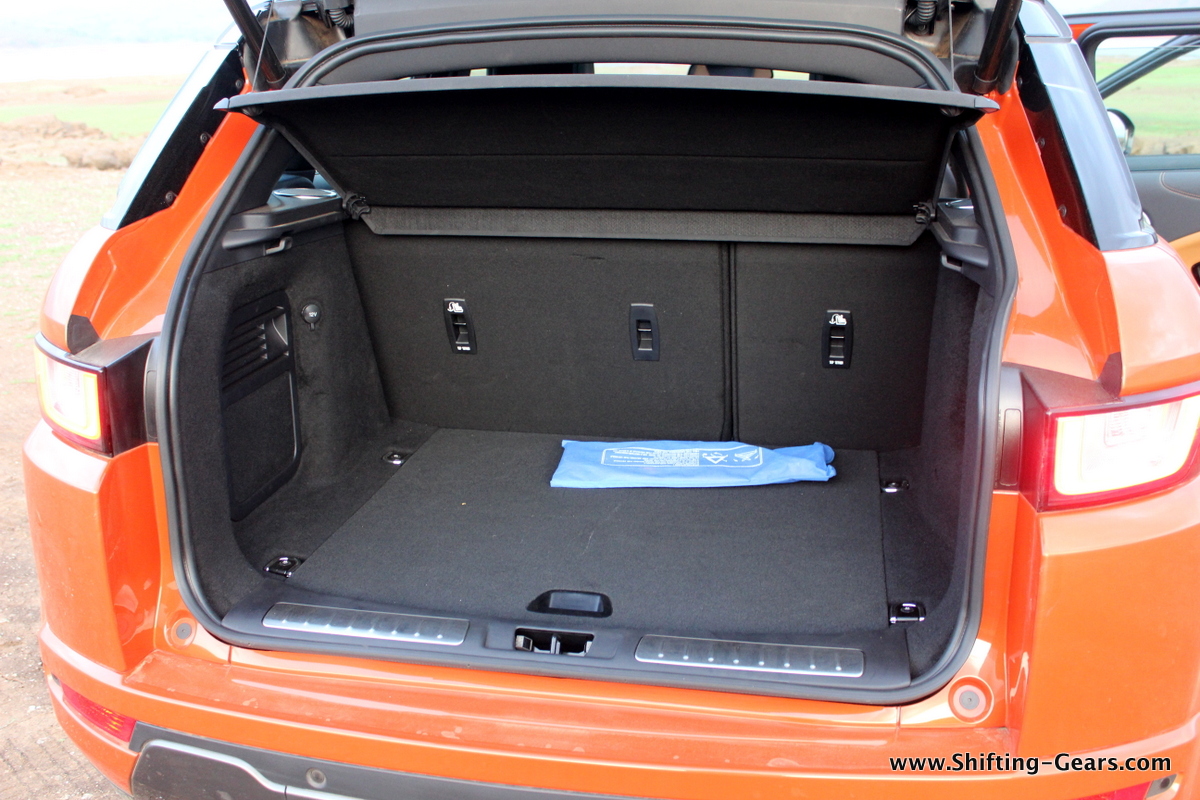 The Evoque is one brilliant car to drive. The damping in the car with its minimal body roll and a direct steering makes the drive feel really confident especially at high speed maneuvering and impressively comfortable when you feel like relaxing. With its 20” wheels, the Evoque soaks up the worst of the worst road conditions and the road balance of this car could be compared with its elder brother, the full sized Range Rover. The interior audio damping is well done but the stub mirrors could create a lot of wind drag and noise when driven at high speeds.

Although it is no sports car, the Evoque does handle pretty well and is well sprung too. There is just a sense of overall solidarity between components that is not found in the likes of other Land Rover products like the Freelander for instance. The only one thing in this car which could really be improvised is the braking. Considering the amount of torque and kerb weight, this car is difficult to stop at the sudden infraction. The brakes feel very sudden and you really have to regulate the pressure on your feet to enable smooth braking if you wish to avoid jerks.

The Range Rover is known to be a capable off-roader and no matter how cosmetically polished this Evoque is, it is still capable of getting its hands dirty if the situation calls for it. All the models are equipped with the automatic gearbox and you could also opt for the All-Terrain Progress Control system which works by combining the TCS and Stability control along with the ABS to get the maximum possible road grip. 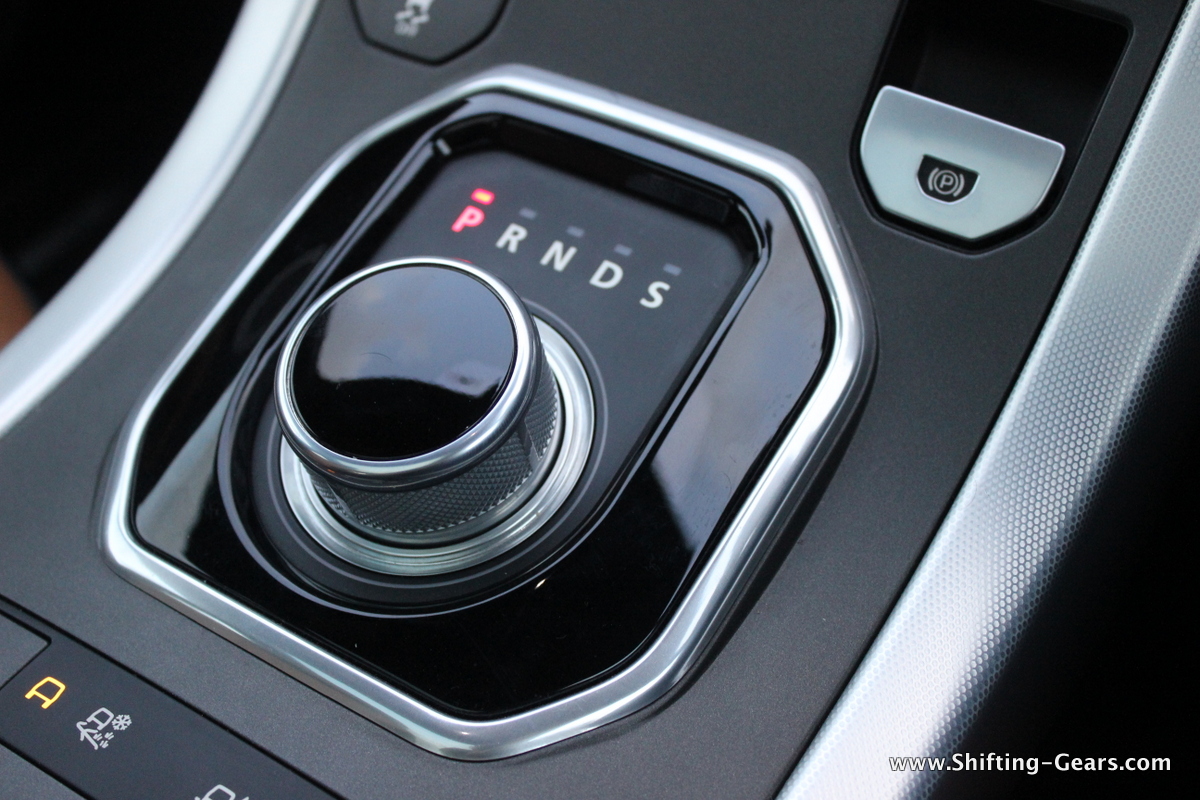 This car was really impressive when we pushed her limits off the road. What I loved the most was high-speed stability and good amounts of grip in wet weather conditions. The electronic parking brake is great for hill-starts and the maximum towing weight of 1,800kg is about class average.

It also comes with a host of off-road pre-settings on its suspension. You can choose between the standard setting, snow, rocks and of course, sand. Although one cannot really expect most Evoque drivers to test out any of these settings, having driven the Evoque over some demanding terrain in the past, we can safely say that this iconic SUV can pretty much handle almost everything that you can throw at it. 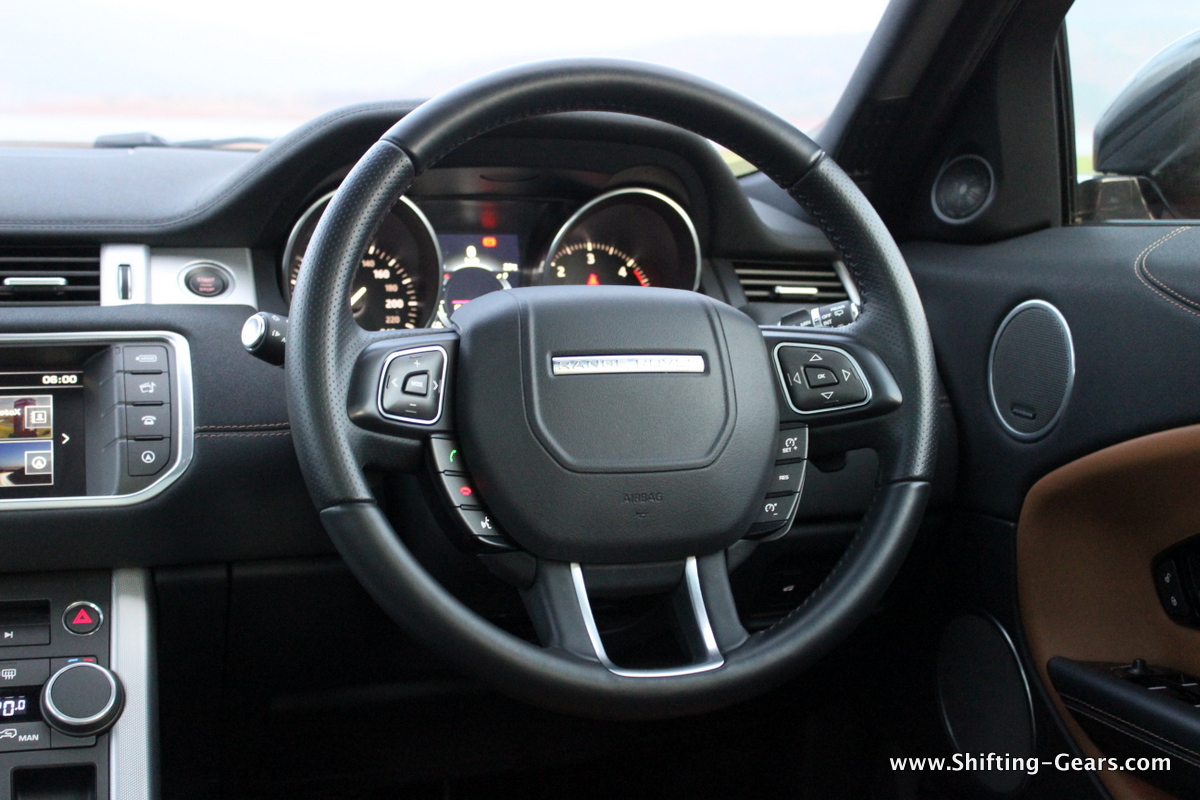 The Evoque is loaded with 7 airbags. It also includes a knee airbag for the driver. Other standard safety features include stability control, hill hold and a tire pressure monitoring system. The hill hold system brakes the car automatically for a few moments to prevent you rolling backwards when pulling away on a hill. The stability system is pretty sophisticated and controls the vehicle automatically should the driver start weaving uncontrollably.

All Evoque models come with lane-keep assist and automatic emergency braking that works at motorway speeds as well as around town. A Blind-spot warning is standard on the range-topping trims, and optional on all others. Traffic sign recognition – which displays the speed limit on the driver’s display – is also available as an option on all but Dyanmic Lux and Autobiography trims, which get it as standard.

An alarm and immobilizer are included across the range that rates the Evoque highly for resistance to break-ins and theft. 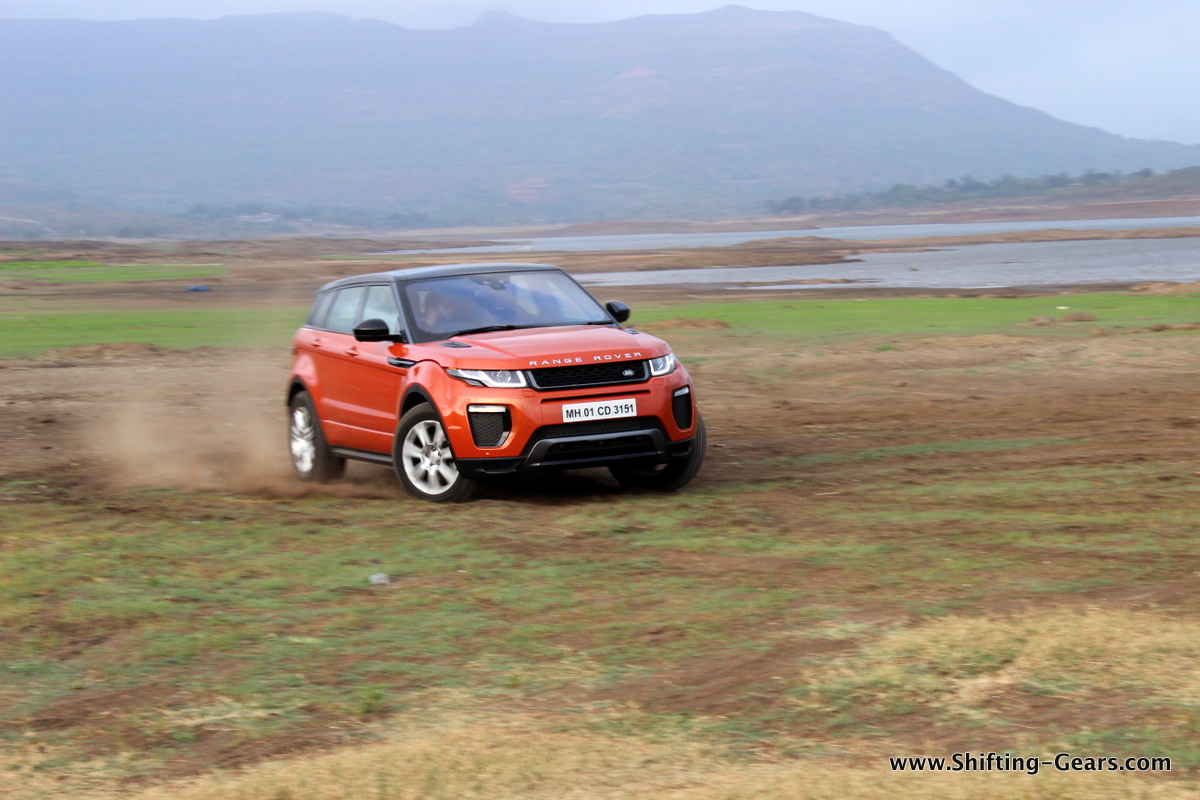 The Evoque has been Range Rovers fastest selling model since its inception. Even though they haven’t really changed the whole design on the car, the smallest improvements have at yet kept it on the top of its pack.

With a quitter engine and new age technology updates its upkept with the rest of Range Rover’s line-up. It may not be as good in the darrows like the bigger Range Rover but if your looking for a crossover in this segment, this one takes the dibs. 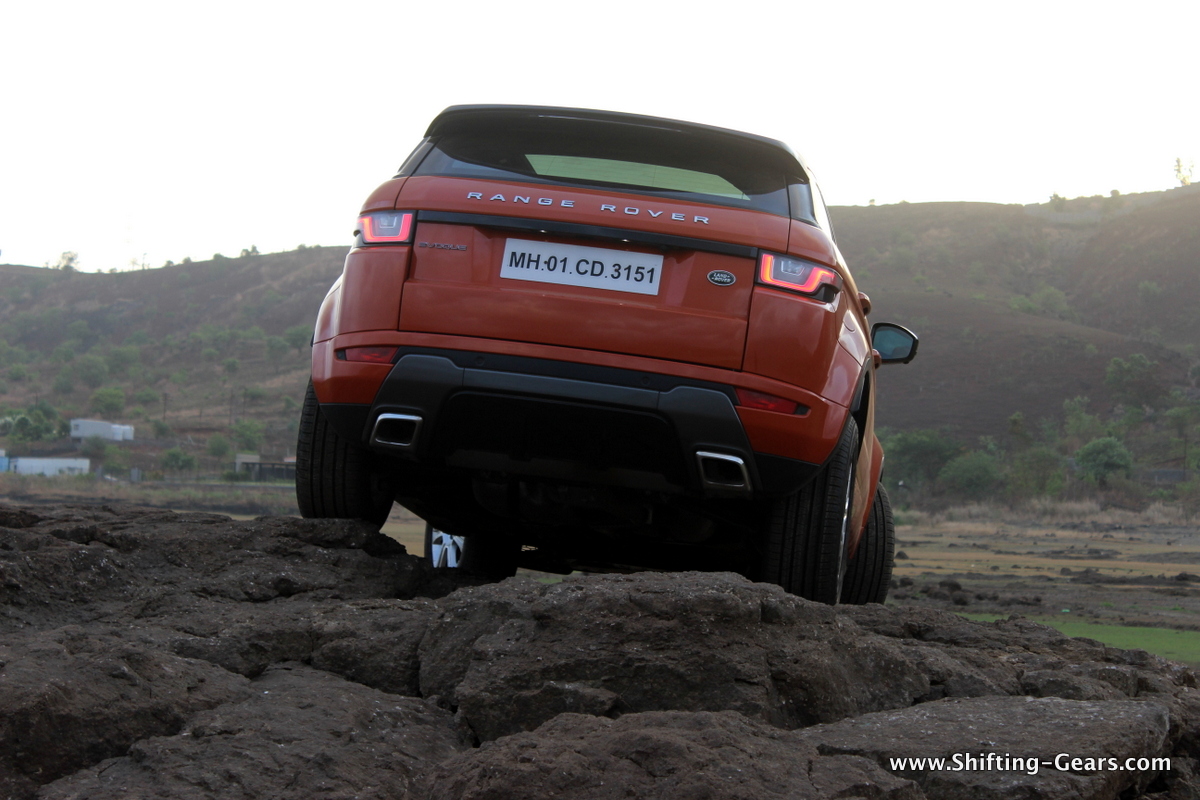 Finding faults on this model is difficult. It may not make the perfect sense to buy one considering the minuscule rear window and crammed up rear seats, but take one look at the exterior, and oh boy, you’d be in awe. Not to mention she drives like a butter knife and you could have the best of both. On road and off road (should you wish to push this damsel off the tar). In all I would sum up saying that if you have 60-70 lakhs to spare on a new car, this is your best bet.