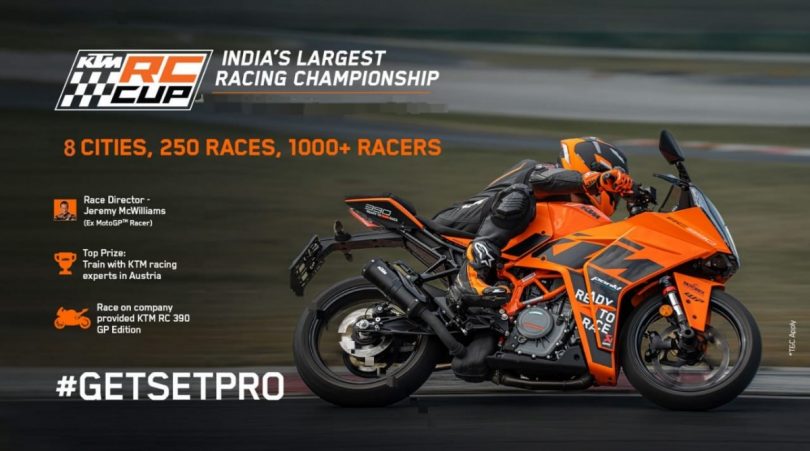 There’s a lot happening at the eighth edition of India Bike Week (IBW). KTM, often dubbed as the world’s No. 1 premium motorcycle brand, announced India’s largest racing championship, KTM RC CUP. This will be a multi-city event that will give a platform for amateur racers to learn from and compete with the best.

Key Highlights Of The Program

The KTM RC Cup will act as the crown jewel of KTM Pro-XP. This unified program offers a range of exciting riding experiences to KTM owners across trails, tarmac & track. As of now, 25,000+ KTM owners have participated in events across India with the aim of becoming better at riding. The KTM RC Cup too, promises to turbo-charge the track experience and take it all over the country. This time it will also include riders outside the KTM fold.

KTM mentioned that the KTM RC Cup will be held between January and March 2023. Initially, it will take place in eight cities. This includes Mumbai, Ahmedabad, Delhi, Chennai, Coimbatore, Bangalore, Hyderabad and Kolkata. KTM further confirmed that the registrations would open soon. With this event, the best racers in the country will not only get a chance to compete. But at the same time, also get trained by some of the biggest names in motorcycle racing. Over 1000 racers will take part in the regional qualifiers. From there, a select group of city winners will race at MMRT, Chennai, to win the national title.

The top 3 winners of the KTM RC Cup will also win a visit to the global HQ of KTM in Austria. Other prize includes a visit to Motohall at Mattighofen in Austria, where the riders will learn the craft of racing from KTM experts. They will also get the opportunity to interact with KTM Racing Factory athletes. Riders also have the opportunity to watch a MotoGP race live.