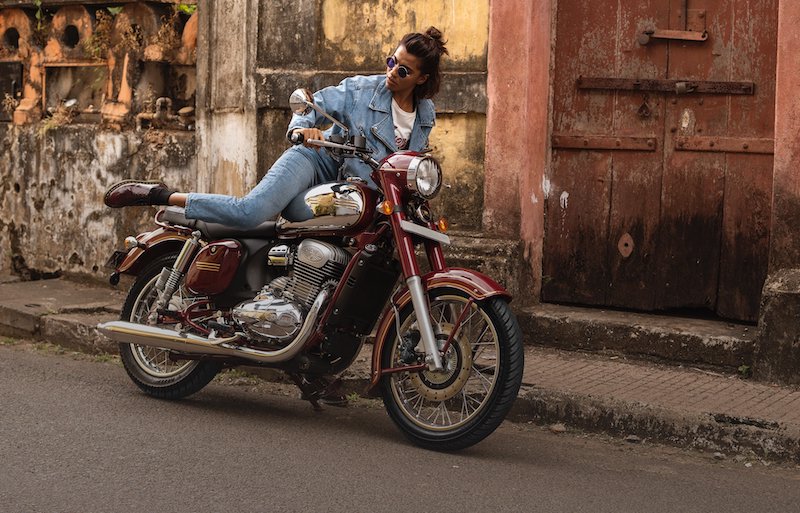 Heritage motorcycle brand ‘Jawa’ which is the condensed form of ‘Janeček and Wanderer’, reincarnated in India by Classic Legends, a subsidiary of Mahindra & Mahindra has updated its official website with new BS6 technical specifications of the Jawa ‘Classic’ also called the Jawa ‘Jawa’ and the Jawa ‘Forty-Two’. Both the motorcycles share the single-cylinder powertrain which has been upgraded to BS6 conformity and now produces slightly lower power and torque figures as compared to the BS4 model.

The engines on the Jawa Classic and Forty-Two were BS6 ready from the day they were launched and now the new changes and a new engine feature which the brand claims to be India’s first ‘cross-port technology’ on a motorcycle, helps Jawa retain the twin exhausts and was believed to produce similar performance outputs as the BS4 model.
But according to the brand’s official website the BS6-compliant 293cc, single-cylinder, 4-stroke, liquid-cooled, DOHC engine with cross-port technology and electronic fuel injection produces 26.51 PS of power and 27.05 Nm of torque. The BS4 engine was rated to produce 27.37 PS of power and 28 Nm of torque matched to a constant-mesh 6-speed gearbox. The BS6 compliant motorcycle also weighs 2 kgs more at the kerb than the BS4 and tips the scale at 172 kgs which could be due to the larger exhaust treatment system used to for the new stringent emission norms.

Other than the engine the Jawa ‘Jawa’ and the Jawa Forty-Two remain unchanged and feature modern-classic design and styling details such as chrome teardrop tank, chrome mirrors, chrome low-slung dual exhaust pipes. The Forty-Two comes with subtle modernity and features black and silver treatment on the engine, an offset black speedometer, black handlebars, bar-end mirrors in black etc.

During its transition from BS4 to BS6, the brand also hiked the price in the range of INR 5,000 to INR 9,928 across the Jawa Jawa and Jawa Forty-Two models, justified by the increase in the cost of precious metals that are used in the catalytic converter systems.

Classic Legends have currently temporarily suspended production and deliveries on the new BS6 models and are expected to commence deliveries soon.