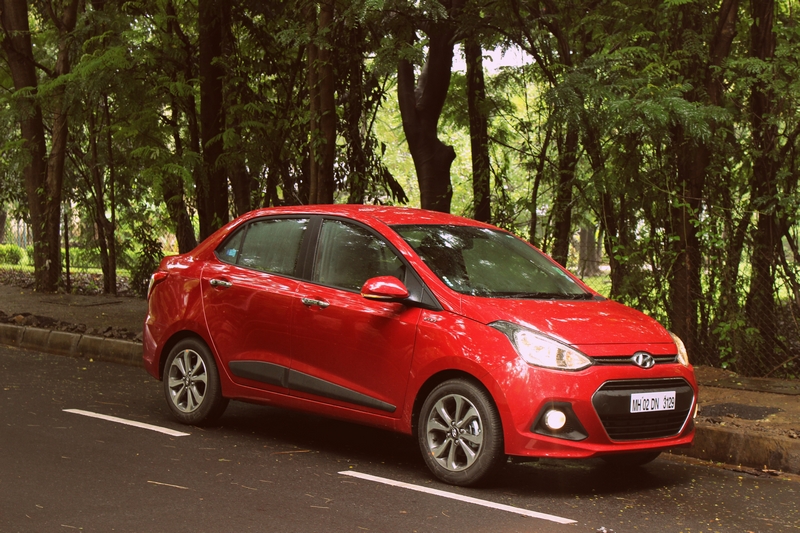 The Accent was Hyundai’s 2nd offering in India and was launched on 14th October, 1999. That makes for a product life cycle of 14 years before it was discontinued! The new Xcent takes over from its predecessor as Hyundai’s new entry-level sedan. Hyundai is playing safe with customer perceptions by going forward with the Xcent name rather than coming out with an all-new badge. The Xcent is a sub-4 meter sedan enjoying the lowest excise duty slab of 8% and hence has been priced lower than the chief competitors – the Maruti Dzire & Honda Amaze. 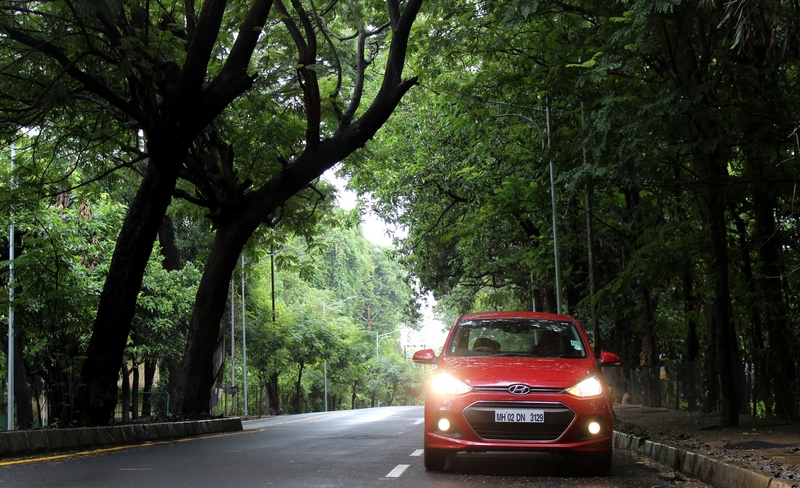 At 3995 mm, the Xcent is a visibly small sedan. It’s nothing but a Grand i10 with a boot, just like the Swift and Dzire and the Brio and Amaze. Hyundai has managed to integrate the boot on the Grand i10 hatchback without making it look quirky or as an afterthought. The car does look small in scale, but has neutral styling which will offend none. The front of the car is identical to the Grand i10 except for the chrome surround on the hexagonal front grille and smoked out headlamps. On the sides, the Xcent is a copy paste job of the Grand i10, save for the slightly different rear doors. The longer wheelbase which the Grand i10 had as compared to the European i10 is a giveaway that Hyundai had this compact sedan in mind right from the hatchbacks development stage. Fit and finish and quality of materials used are very good both on the exteriors as well as interiors. 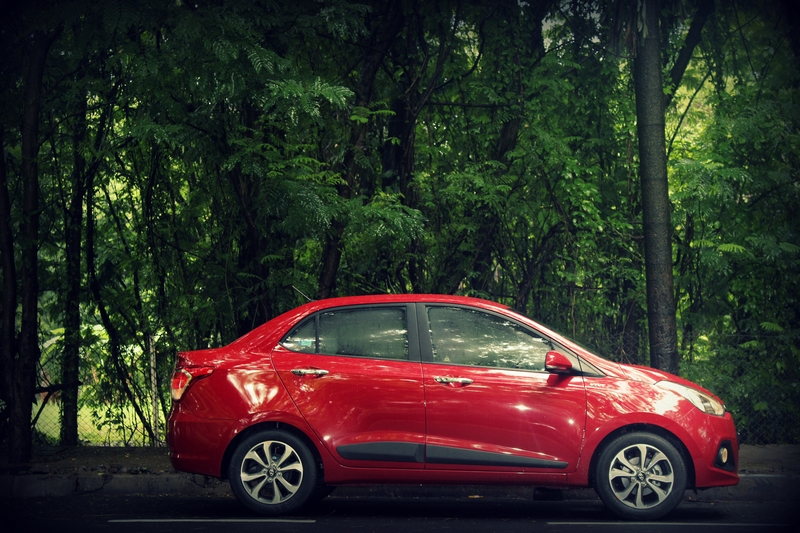 Side profle, Grand i10 in India had 40mm longer wheelbase compared to the European i10, probably for this

The the top SX (O) trim is equipped with dual airbags, ABS, keyless entry & go, reverse parking sensors, reversing camera, electrically folding mirrors, gearshift indicator, rear AC vent, cooled glove box and 1 GB of on-board memory for your MP3s. However, none of the models get a distance to empty feature, adjustable neck restraints and a deal pedal. ABS though is available even on the middle variant as an option pack. The Xcent is also available in an automatic version with a petrol engine. 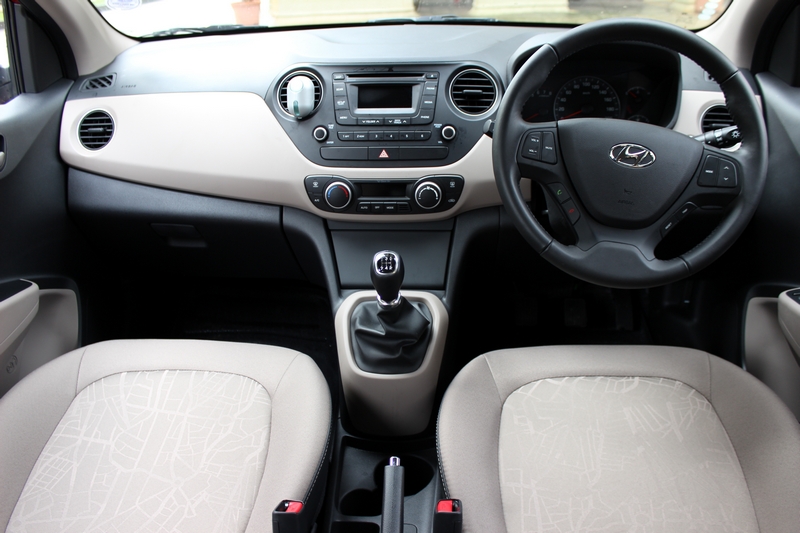 Dual tone beige and black dashboard similar to the Grand i10

If you own a Grand i10, or have been inside one, this is going to be familiar territory. The dashboard is identical to the hatchback sibling. The quality and fit and finish are undoubtedly the best in the segment. Interiors are in a dual tone colour scheme – black and beige. The difference between the colour scheme in the hatchback and the compact sedan is that the Xcent has the seats in all-beige as compared to the Grand i10’s black and beige seats. Front seats are comfortable with decent lateral and under-thigh support. The integrated neck restraints look rather small, but fall in the right place when put to use. The seat adjustment including front and back, and the height adjustment will suit the taller as well as the shorter drivers. Very good ergonomics for the control buttons all around the car and the big buttons help in ease of access too. Cabin width is surely smaller than the C2 segment sedans, but is satisfactory and you will not find yourself elbowing the front passenger when on the driver seat. Medium compound seats will work in the favour of long drives. Beige seats however are going to get dirty in a couple of months’ time. Visibility for the driver is sufficient and the reversing camera with the display on the rear view mirror coupled with parking sensors (with audible feedback) makes it easy to park in tight spots.

Steering wheel is premium to look at, with integrated controls for the audio, phone and MID. Large buttons are easy to use. Horn pad however is pushed inside because of the other controls on the steering and hence, you have to stretch your thumb to use it. Centre console mounted gear lever falls in your hand without any fuss and is light to use. This has resulted in carving out some extra space next to the handbrake. Missing dead pedal and the missing driver armrest however will take away the joy from those long drives. Instrument cluster is simple and easy to read even under direct sunlight. OEM stereo sound quality is acceptable and very few will find the need to upgrade to a better – expensive ICE. The head unit also provides 1GB storage capacity so that you can have your favourite track with you all the time. Rear speakers feel weak, probably because they are mounted on the rear doors and not on the parcel tray behind. Glove box is average sized, but has cooling functionality. 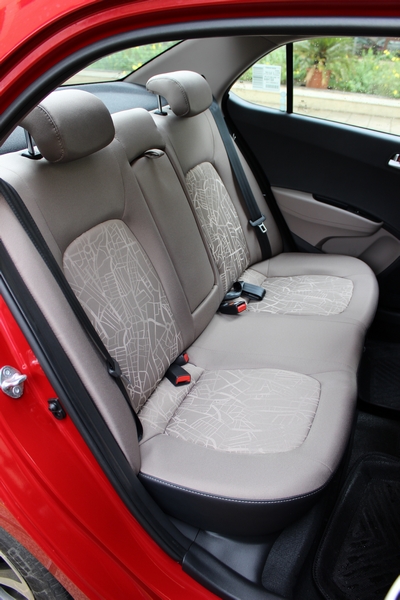 The rear seat can accommodate a tall passenger seated behind a tall front passenger / driver comfortably. At 5’8”, I was comfortable being seated behind my own driving position with almost an inch of clearance between my knee and the front seat. Backrest is long enough to support taller passengers and is also at a relaxed angle. Rear passengers get adjustable neck restraints and they fall right in place to provide good support. Two adults can seat comfortably in the rear seat, but three is a bit of a stretch. Floor hump is minimum, hence not interfering too much with the fifth occupant’s feet. This is when the compact dimensions show up and it will be a squeeze to commute longer distances with three at the back. The window sills on the rear are on the higher side and do limit the amount of light coming in. Rear AC vent adds to the cool factor and also helps maintaining a cooler temperature at the back. Don’t expect the AC blast to be as effective as from the dashboards AC vents though.

407 litres of boot space is bigger than the Honda Amaze by just 7 litres. One can easily fit 4 large size bags in here. Long press the boot button on the smart key, and the boot lid pops open.

Once you hit the engine start button, there is noticeable movement inside the cabin. There is a small amount of that typical 3-cylinder vibration felt, but the refinement levels are acceptable and an average Joe won’t even know the difference. With a flat torque curve, power delivery is very linear and the turbo-lag is minimum. This reduces the number of downshifts when driving through city traffic. Light controls such as the steering, gearbox, clutch etc. make the Xcent an effortless car to drive in and around the city. However, if you like the 2,000 RPM turbo spool, you’re going to be disappointed. Power deliver is linear and the engine performance is average at best. The Xcent is not very comfortable being revved hard, almost pointless revving beyond 3,500-3,700 RPM. It loses breath on higher RPMs. Driving around at 80 kmph; the engine is relaxed at under 2,000 RPM. Engine noise at high speeds is negligible and the wind noise is also well controlled. Hyundai has managed brilliant NVH levels with this 3-cylinder diesel motor, unlike the Volkswagen Polo. 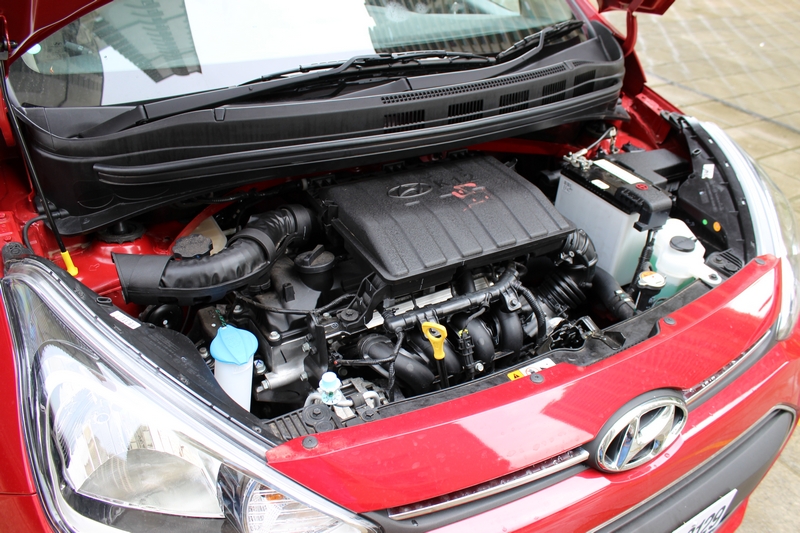 The petrol Xcent is powered by a 1.2L 4-cylinder engine producing 82 BHP of power @ 6,000 RPM and 114 Nm of torque @ 4,000 RPM. Start the engine and you will notice how refined the engine is. There is absolutely no noise or vibration felt at idle. Unlike the diesel, this petrol engine is very revv-happy and power is delivered throughout the RPM range. The petrol engine is a lot more fun on the highways compared to the Xcent diesel, which requires a sedate driving style. With decent mid-range punch, overtaking fast traffic is not too much of a trouble here. The petrol delivers an ARAI approved fuel efficiency rating of 19.1 kmpl. This engine gets fairly vocal when you revv it hard, and well, a few will actually enjoy this. A light clutch, smooth gearbox with well-defined gear gates and the light steering makes the Xcent a brilliant commuter.

Ride and handling of the Xcent is not the typical bumpy Hyundai story. With all 4 gas charged dampers, the Xcent is sufficiently planted. Uneven roads are soaked with a muted thud and high speed ride is well balanced too. Body roll is on the minimum side. Compact sedan buyers will be happy with the predictable ride quality.

You can easily steer the Xcent at parking speeds with one hand, the steering is that light. Also, the turning radius is compact and making U-turns is a breeze. The steering is direct, but on high speeds, one needs to have a firm hand on this light steering even though it weighs up sufficiently. For those who are looking for steering feedback, the Xcent’s steering is not for you. The single tone OEM horn is too weak and an upgrade is probably a good thing.

With a 165mm ground clearance, the Xcent cleared almost all city speed breakers without scraping, even with 3 on board. Brakes however are quite sharp, just like the Grand i10. Newbie drivers will take some time getting used to the sharp bite.

Click here to check out the Hyundai Xcent photo gallery.