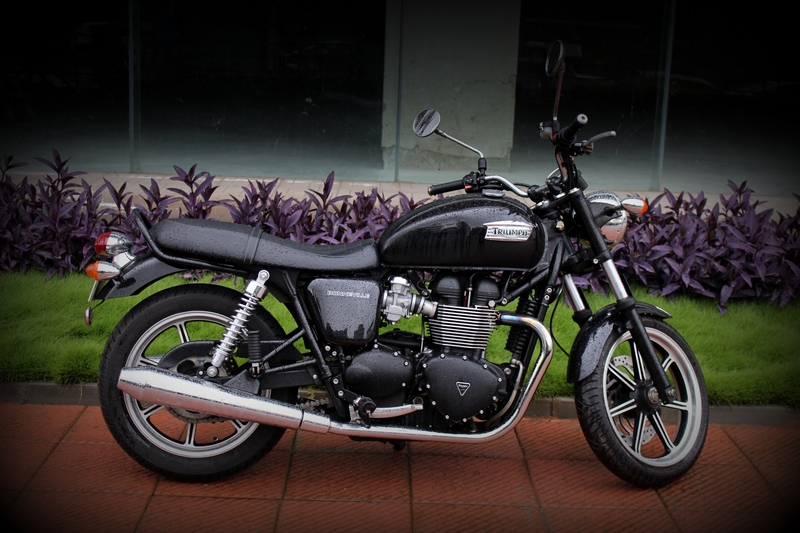 The Triumph Bonneville has been launched in India at a price of Rs. 5.68 lakh (Ex-Showroom Delhi). 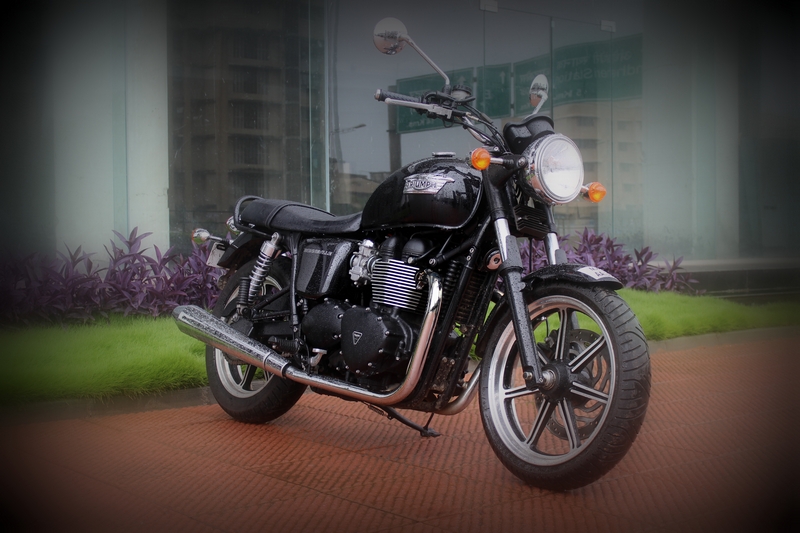 Triumph first revealed their motorcycle line-up for the Indian market during the 2012 Auto Expo in New Delhi. But, the time taken from revealing the bikes to actually getting to the streets was rather long. What’s the entry level bike from the British marque then? It’s the Bonneville. While the Bonneville is a pretty straight forward no nonsense standard bike without any bells and whistles, the vintage flair that it carries more than compensates for everything that one might find missing on this modern classic.

And when we say vintage flair, it doesn’t mean that the bike still carries some old school motor which might be painful to ride. In fact, the Bonneville, as the company claims, is a modern classic backed with modern technology. The first Triumph Bonneville T120 was launched in 1959 which was a 650cc parallel-twin, and this bike was based on the Triumph Tiger T110. Eventually, after quite some ups and downs in the Bonneville’s plate, the displacement was increased to 865cc and carburettors were replaced with fuel injection in 2008. There are currently three versions of the Bonneville – The classic Bonneville, the Bonneville T100 and the café racer inspired Thruxton. 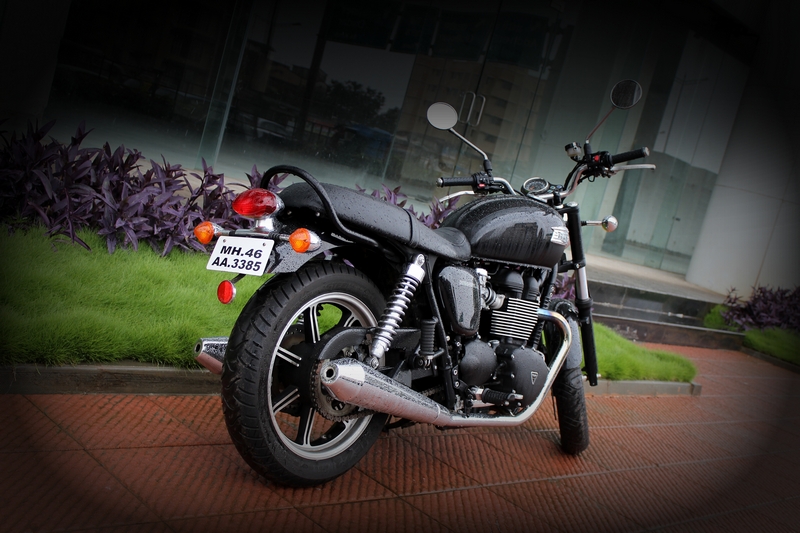 When you look at the bike, age of the design is evident at first glance. And we mean that in a good way. Retro looking bikes have a huge fan base which manufacturers cannot ignore. The bike looks pretty much, well, bare bones. An old school stainless steel handlebar, long flat seats, conventionally mounted round rear view mirrors and all that. I personally love the round headlamp which the company has carried forward without any projector addition, like Royal Enfield did with the Thunderbird. It’s not just that, but even the tubular steel cradle frame and a twin sided tubular steel swingarm is a giveaway that this is an old school, built for fan boy’s motorcycle. The standard Bonneville lacks a tachometer, but gets a small digital screen inside the speedometer to read out the odometer & trip meter. A couple of warning lights are placed to the right hand side of the speedometer to complete what might be a very minimalistic instrument cluster. It might not sound like a big deal, but the turn indicators with orange lens caps also add that little bit more to the retro look, where all the current generation motorcycles wear a clear lens cap. Just to add more to the bikes character, Triumph have also given a fake carburettor body that covers the fuel injection hardware – talk about attention to detail. All chrome twin exhausts, a minimalistic tail lamp cluster wrap up the looks department. Also, as has been the case with all Triumph Bonneville’s till date, even the current generation has the ignition key placed to the left hand side of the headlamp, and is reasonably accessible. 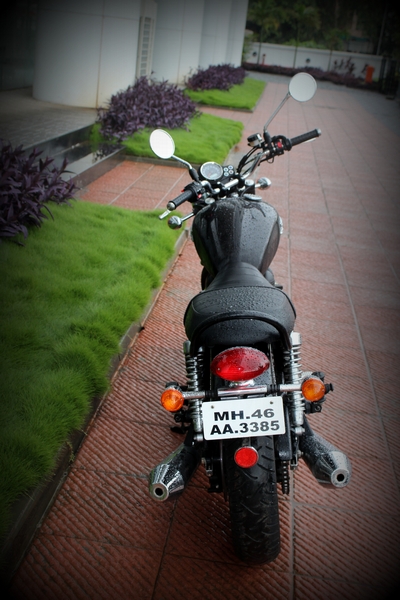 Ergonomics are pretty much comfortable for an average Indian height of 5’8” or so. But taller riders might find the legroom to lack a little. That aside, riders will immediately feel at ease with the riding position given that the seat is positioned just right at 740mm. Also, the seat offers decent space for the pillion to scoot along. The seat however is on the firmer side. Although the riding position will encourage you to go for those long rides, the seats are going to be a bit of a problem here. Triumph does offer aftermarket seats for the Bonneville which they call as the ‘king and queen seats’. Riding posture is relaxed and upright, will suit all and offend none. Reaching out to the handlebar and using all the controls is easy too. The clutch and brake levers are adjustable to suit ones taste. It might be a retro looking motorcycle, but it does duty with a toe gear-shifter and not the conventional toe and heel gear-shifter. Rubberized foot pegs for the rider and pillion provide decent grip even during the monsoon season. 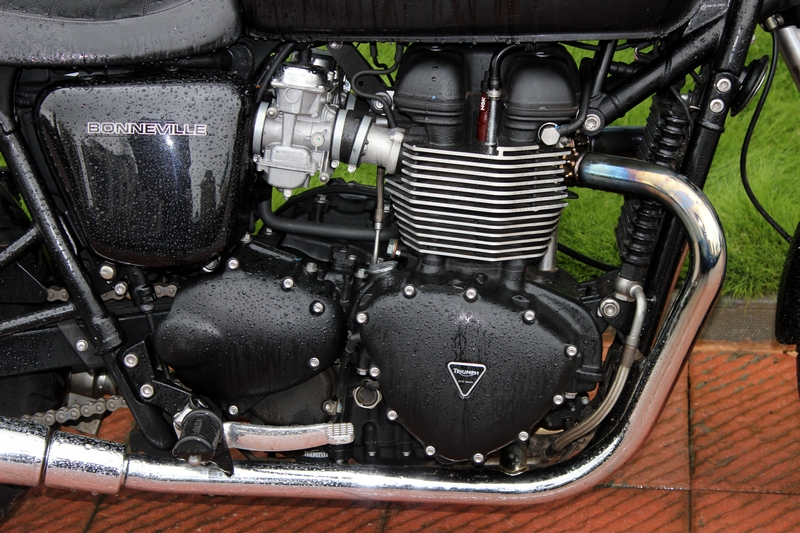 The Bonneville is powered by an 865cc air-cooled, DOHC, parallel-twin engine with a 360 degree firing interval with multipoint sequential electronic fuel injection. The bike produces 68 PS of power at 7500 RPM and 68 Nm of torque at 5800 RPM. Figures might look small, but the performance is more than acceptable for Indian road conditions. Gearbox is a 5-speed unit; don’t be surprised if you find an uninformed rider complain that the bike just wouldn’t shift to sixth gear. The almost universal one down, four up gearshift pattern has been selected. Wring the throttle and the bike pulls without any hesitation and the dual exhaust pipes give out a refined humming note. The Bonneville has a healthy flat torque curve which makes it very easy to ride in the city and delivers enough low end torque to avoid those constant gear shifts. In top gear, we were riding comfortably at around 60-70 kmph. The bike feels at home even at low speeds and does not show signs of knocking either. However, we do not preach lugging the engine and timely downshifts are essential for a longer engine life. But as the name might suggest, don’t expect the performance of this bike to match those who break land speed records. The Bonneville is a comfortable touring motorcycle with decent punch only not to disappoint you. Vibrations are well controlled considering a parallel twin configuration. With a wet weight of 225 kgs, low seat, light clutch and reasonably compact in scale, the Bonneville is easy to live with and one can scoot around traffic without any fuss. Although the dealership sales guy advised me that this bike can throw some surprises, I was actually much more comfortable than he would have imagined and found myself making my way through the traffic easily. 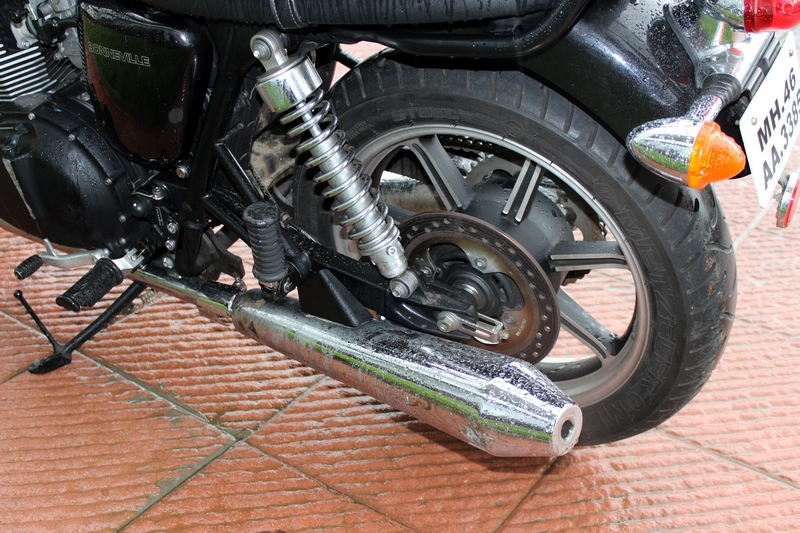 A single disc setup at the front and rear without ABS is a downer though. The bike can easily manage speeds of up to 150 kmph, and for any bike that can do such high speed runs, ABS is a must in our books. No matter how pro a rider you are, under panic braking, locking up the tyres is a sure shot possibility. The suspension set up is on the firmer side and will make sure that you take timely halts during those long bike rides. However, this firmer suspension helps avoid nose dive and hence, both the rider and the pillion stay comfortable during heavy braking. Tyres are 130/80 R17 at the rear and 110/70 R17 at the front which are considerably narrow adding to the nimble riding feel when on the go. These Metzeler tyres also provide decent grips while attacking the corners. The Bonneville comes equipped with 17″ cast alloys in dual tone – black and chrome.

At Rs 5.68 lakh (Ex-Showroom Delhi), with all the heritage it comes with, we think it is a very good modern classic offering with refinement levels at par with the current crop.

Click here to check out the Triumph Bonneville photo gallery.