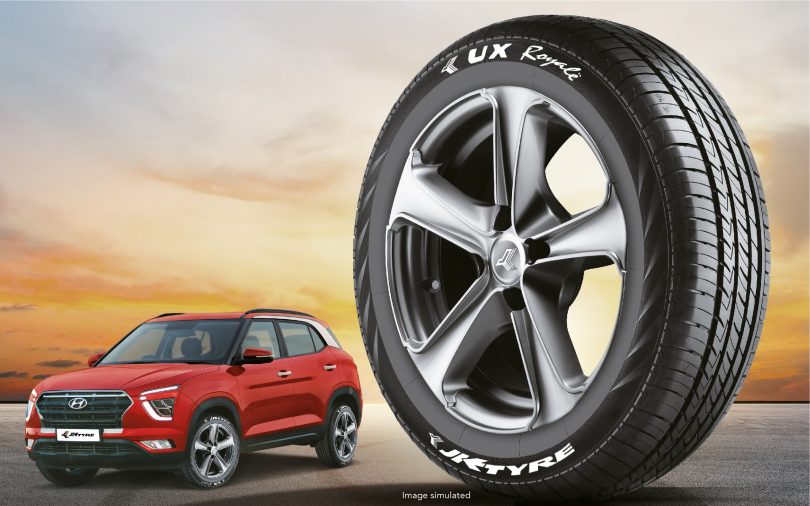 JK Tyres and Industries today announced via an official press release that it will be the OEM tyre supplier for the top-variants of the Hyundai Creta. Hyundai Creta is the highest selling SUV in the India market and now the top variants will come with the JK Tyre’s UX Royale. These rubbers will be slapped on the 17 inches alloy wheels having an aspect ratio of 60 per cent and tyre’s width will be 215 mm and thus the tyre dimension is 215/60 R17. JK Tyres claims that the 5-rib asymmetric design, variable draft groove technology, aero wing design along with the stable shoulder tread will provide the best in class stability at higher speeds and reduce road noise to a great extend.

The Hyundai Creta has been consistently making into the list of the top-10 selling cars in India since its launch in February 2020. The SUV is offered with multiple engines and gearbox options. The engine options are; a 1.5-litre naturally aspirated petrol engine making 115 PS of power and 144 Nm of torque, 1.5-litre turbocharged CRDi diesel engine which cranks out 115 PS of power and 250 Nm of torque and finally the much-awaited 1.4 litre-turbo petrol oil burner making 140 PS of power and 242 Nm of torque is also being offered. As far the transmission options are concerned Hyundai is offering the turbo-petrol with the Dual Clutch Transmission whereas the other two engine options are available with both 6-speed manual and automatic of which both torque converter and CVT are on the offer.

In the features list, it is no surprise that Hyundai has loaded the SUV with a lot of equipments of which some are first-in-segment as well. The key highlighting features are; large panoramic sunroof, powered driver seat,  ventilated seats, Bose audio system and more. The latest generation Creta is priced at INR 9.82 lakhs for the base trim and the price rises as high as INR 17.33 lakhs (ex-showroom) for the top-spec variant. There are rumours that Hyundai will soon launch a 7-seater variant of the Creta sometime this year.