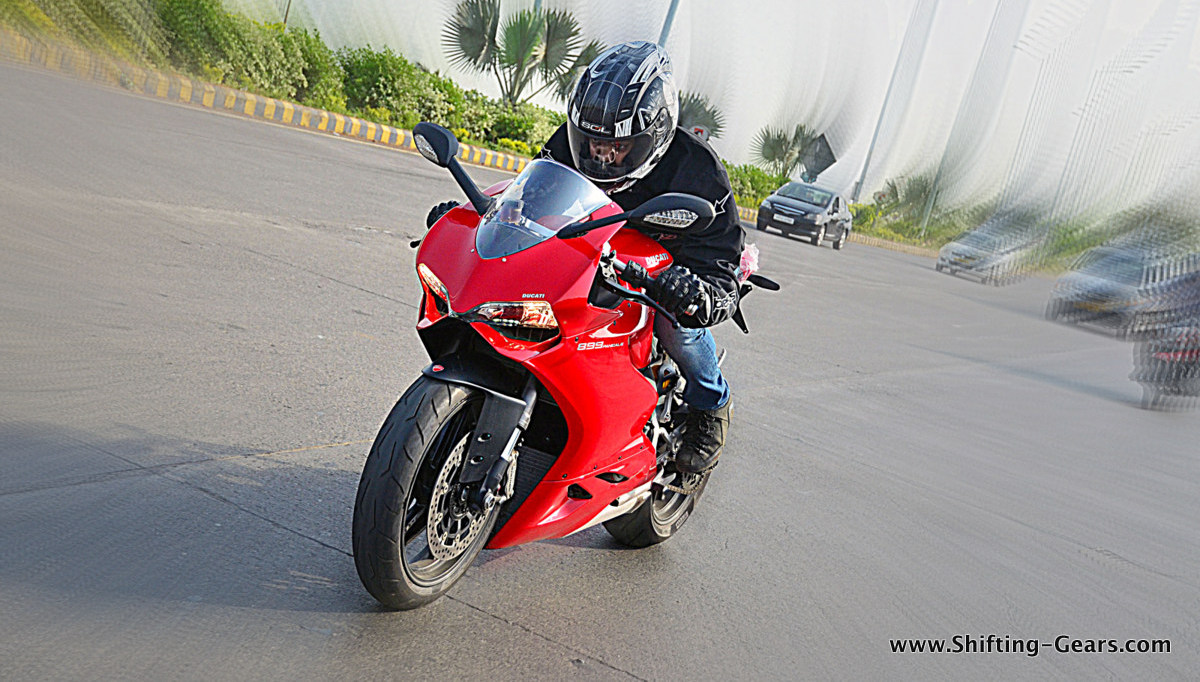 The love for supersport motorcycles in India is growing, and growing fast. While litre-class machines are getting more & more expensive thanks to modern technology coupled with our Indian taxes, middle-weight supersport motorcycles are fitting the bill for most riders. While the Triumph Daytona was the only track tool available in the fully-faired middle-weight category, we now have a new entrant in the segment – the Ducati Panigale 899. Ducati Motor Holding S.p.A. is an Italian company that designs and manufactures motorcycles. Headquartered in Bologna, Italy, Ducati is owned by German automotive manufacturer Audi through its Italian subsidiary Lamborghini, which is all owned by the Volkswagen Group. Ducati has set up showrooms Delhi, Gurgaon & Mumbai at the moment and is working on more locations across the country. What has earned brownie points for the brand is that Ducati will offer service support to existing customers in India. Ducati has brought almost the entire range to the Indian showrooms, in CBU guise. Prices range from Rs. 6.38 lakh all the way up to Rs. 46.75 lakh. 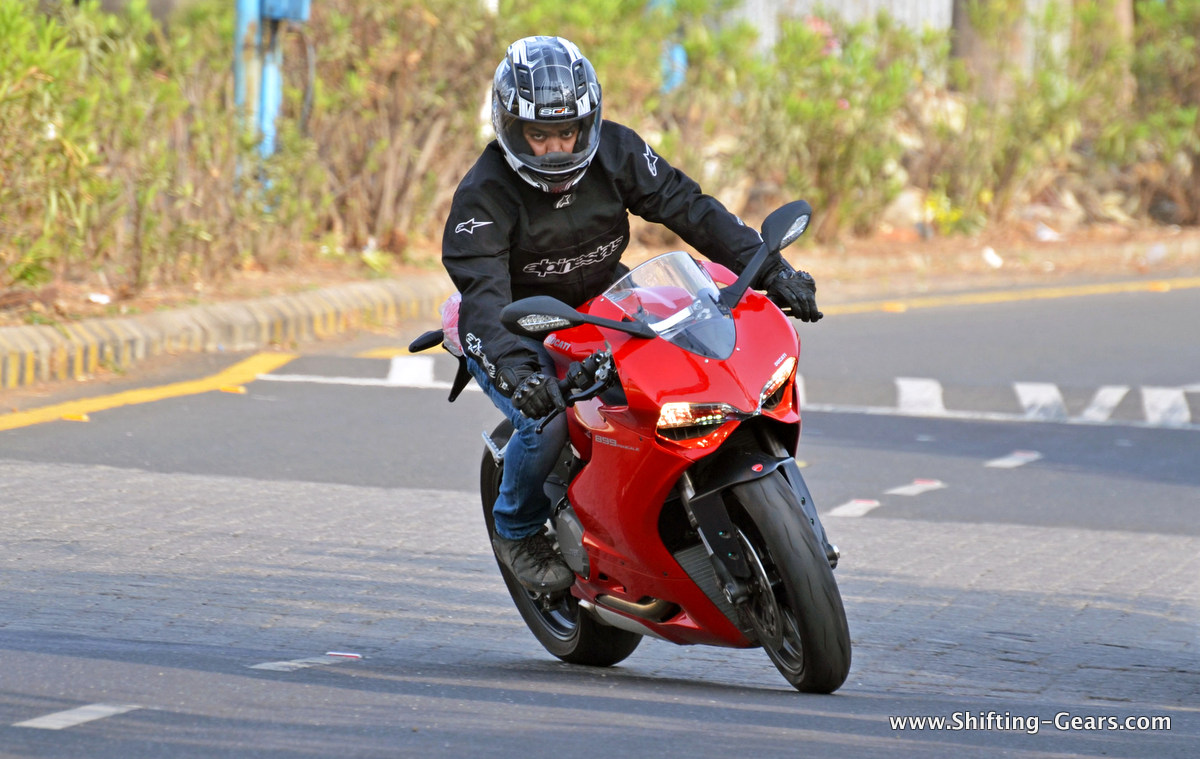 The Ducati Panigale comes to India in two engine options & a total of 5 variants.

The Ducati Panigale 899 replaces the 848 Evo in Ducati’s global line-up. The bike looks very similar to the flagship Panigale 1299, and hence, a very desirable product at less than half the price of the flagship model. So what looks absolutely smashing in flesh, does it deliver when you wring the throttle wide open? We took the Panigale 899 for a spin to check out how it fares on the Indian streets.

Design:
As soon as you walk closer to this scarlet red machine, you can’t help but grin. The Panigale 899 is a fantastic looking motorcycle, and clearly one of the best looking supersport bikes one can own. Built as a monocoque, the Panigale 899 is tightly packaged and although a bit long, the width is really easy to manage in Indian riding conditions. 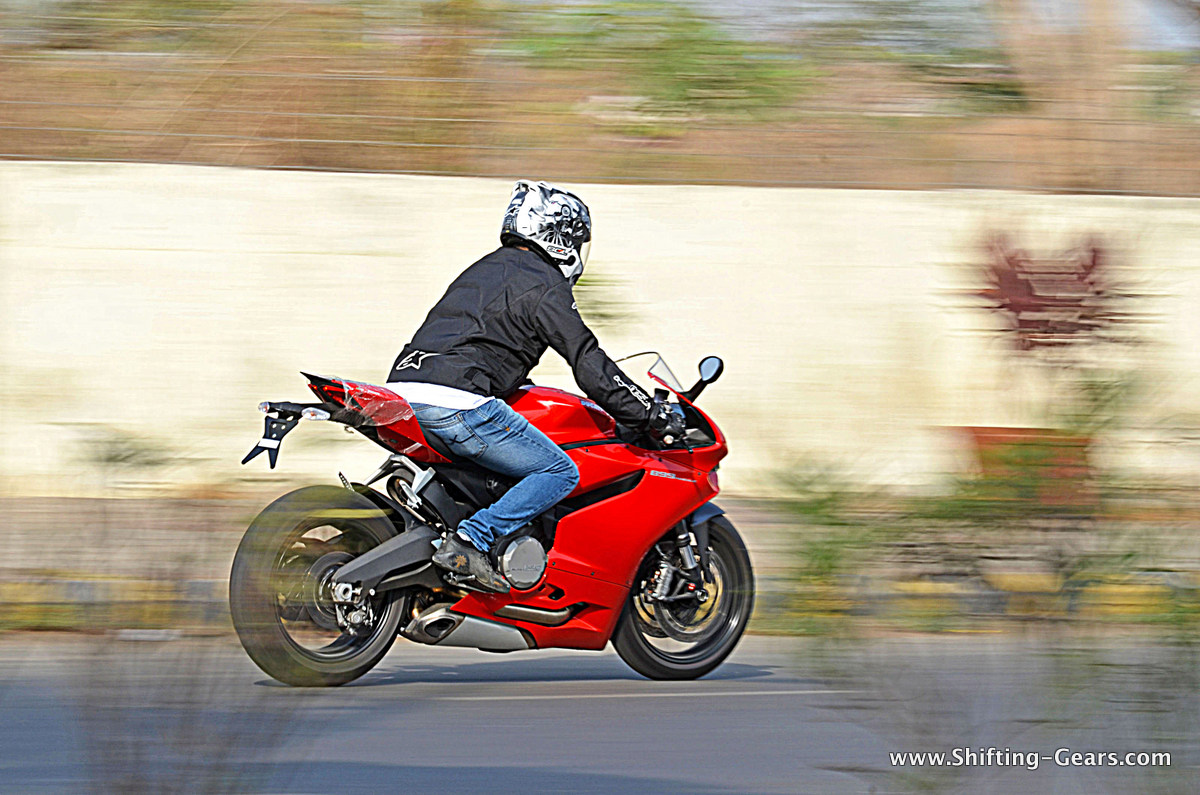 At the front, the highlight are the twin headlamps. These units which sport a combination of LED & regular lens headlamps look sharp & edgy. Also, the headlamps have integrated frontal intake ducts which channel cold air to the engine. What we didn’t like though were the cheesy LED DRLs. They look like trying a bit too hard to look cool. The overall headlamp section clearly indicates that aerodynamics have been a key element considered while on the design board. Above, you have a bubble shaped windscreen which works well to deflect wind over your helmet when in a crouched position. The screen is of clear plastic, hence, helpful even during some fast night riders. Rear view mirrors mounted from either side of this windscreen house the LED turn indicators. Upside-down front fork holds on to 2 x 320 mm semi-floating discs, radially mounted Brembo Monobloc M4.32 4-piston callipers with ABS as standard. Front mudguard is seen in matte black plastic and gets a small Ducati logo on top.

Walk to the side, and the clean design is the right mix of elegant & sporty. There are not too many cuts & crease likes on the bodywork and this looks very pleasing. What looks badass though are the exposed bolts which hold on the fairing. The side fairing neatly mounts under the headlamp fairing. On the side, you only have one aero duct to allow heat out from the engine bay. The sculpted tank has a Ducati sticker neatly placed on the most protruding section. Seen in full gloss paint, one will have to go the aftermarket way to add tank pads & the likes to get more grip from the tank while riding hard. Some framework is exposed under the rider seat and the engine case is also to be seen in a silver / beige colour. Footpegs are rear set & high, visibly. Seats are of the split & step-up type. The Panigale 899 gets an underbelly exhaust. It is a 2-1-2 system with catalytic converter and 2 lambda probes. Twin stainless steel mufflers with alumimum outer sleeves. 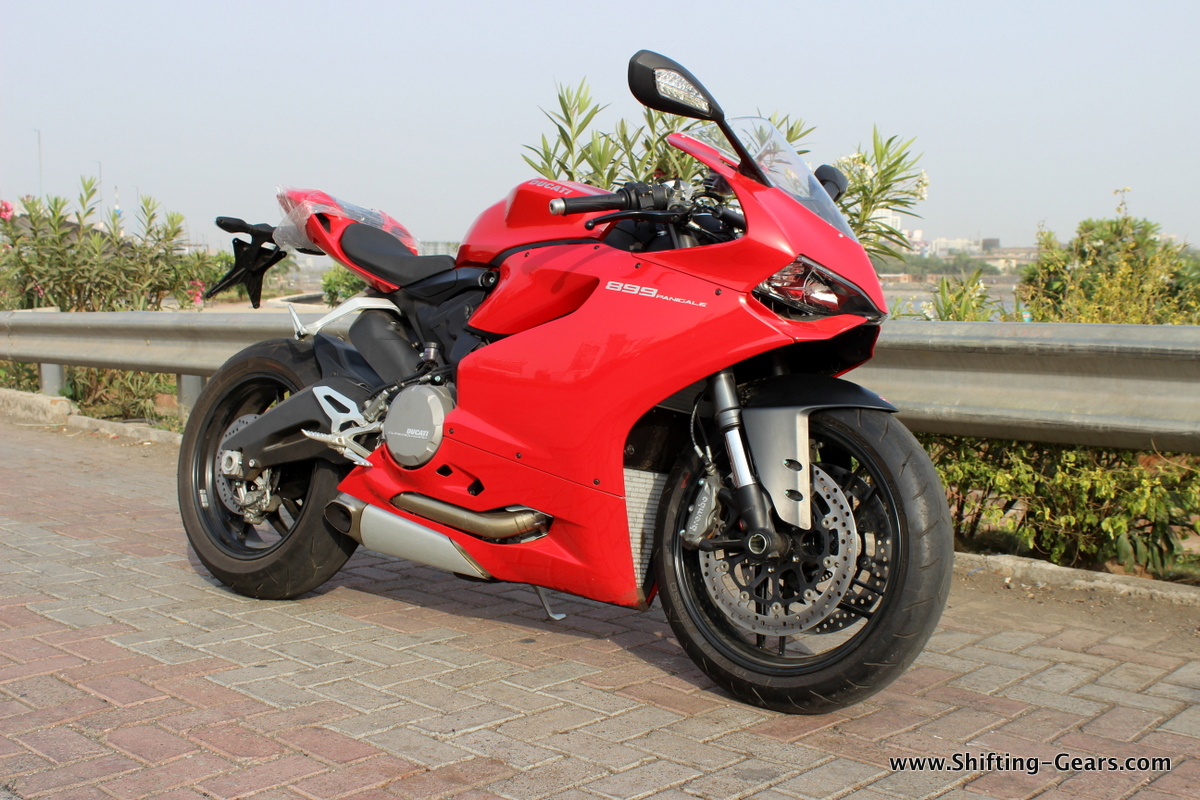 Rear monoshock is actually mounted more towards the centre, and placed horizontally. It is a fully adjustable Sachs unit holding on to an aluminum double-sided swingarm. At the back, you get dual LED tail lamps. The rear design is aircraft like and the Panigaly 899 looks very sharp from the rear angle. The way the rear panel bolts on wrapping around the tail lamps looks like a work of art. You get a protruding tail kit to mount your number plate and it gets clear lens turn indicators. Rear tyre is fully exposed and there is no ugly tyre hugger seen here. Rear brake is a 245 mm disc, 2-piston calliper with ABS as standard. Rear footpegs are easily detachable for shredding some weight during track days. A small Ducati logo accompanied by an Italian flag is seen next to the pillion seat, on either side of the rear panel.

Overall, there is no doubt that the Panigale 899 is an eyeball magnet. Be it on the move, or parked in a garage, the bike is bound to attract people to have a closer look. So if you love your bikes in the most beautiful of form, this one here excels in that department.

Instrumentation & ergonomics:
The instrument panel on the 899 Panigale is an advanced multifunctional LCD unit, with layout derived from Ducati Corse’s experience in World Superbike and MotoGP. Showing a vast array of information in a format highly visible even when tucked behind the windscreen at maximum velocity, the dash also changes its display according to the riding mode selected – ensuring that the rider always has the most important information for each use, available at a glance. Instrument panel is a single screen unit with the tachometer in digital running horizontally on top, and information such as speed, gear, DTC, fuel, temperature, average fuel economy, etc, shown below. A couple of tell tale lamps are placed on top on this TFT screen. 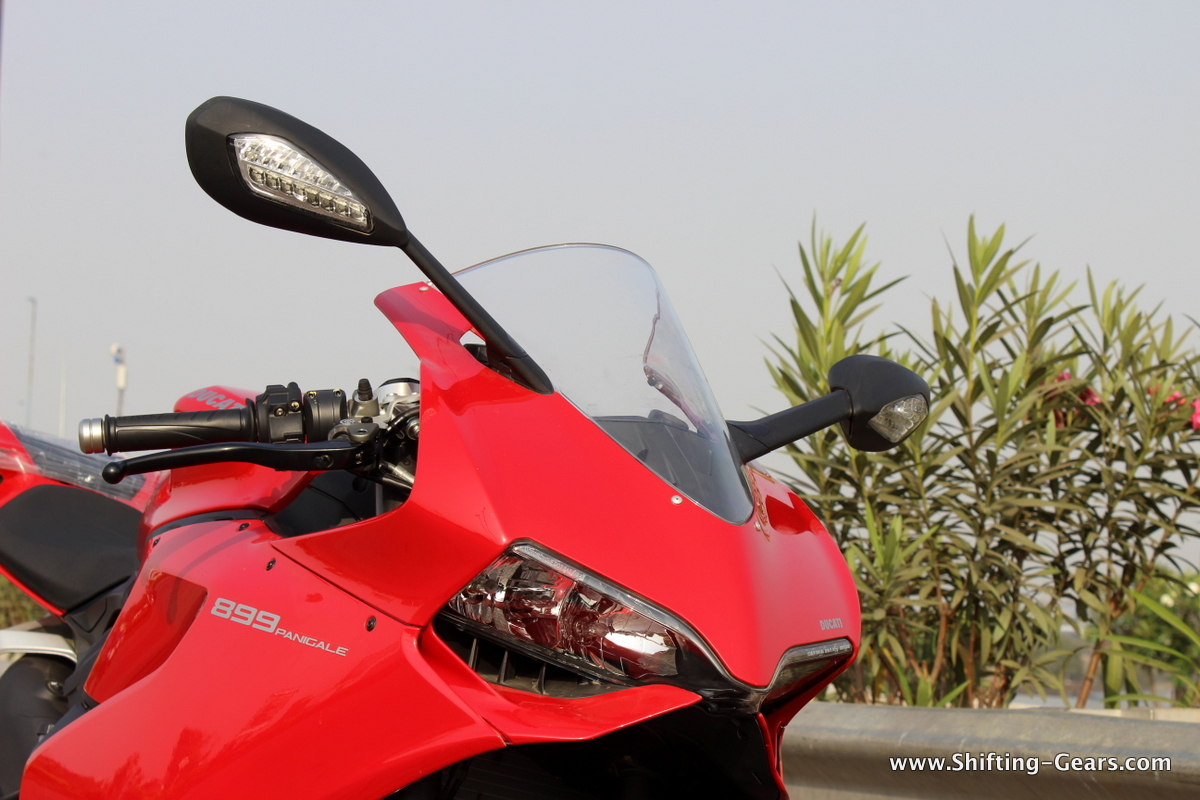 Almost 15 lakh OTR, the Panigale 899 doesn’t get some basic equipment such as adjustable clutch & front brake levers. Rear view mirrors offer a decent viewing range. Plastic quality of the control switches is good, and nobody would complaint about it. LHS switchgear hosts the usual buttons along with the switch to toggle between riding modes & DTC. The RHS switchgear only hosts the pull-down engine ignition switch. Keyhole is mounted conventionally, ahead of the fuel tank.

Clip-on handlebars from Showa get a damper as well. Seen finished in silver, they are placed low and offer the best supersport position. Hop on the Panigale 899, and the seat height of 830mm is similar to the Triumph Daytona 675R. However, we did find the riding position on the Italian a tad bit easier. The bike is a supersport machine, hence, it is a given that the riding position is committed. You lean forward a fair amount, and if you’re new to this segment, be prepared for some wrist pain in the first couple of weeks. Footpegs are rear set, and placed higher, this will allow for a lot of fun when riding around your favourite corners. Seat compound however is a bit hard, and gets your bottom sore in sometime.  Rider seat is upswept towards the end, to offer a better seating stance when riding hard. 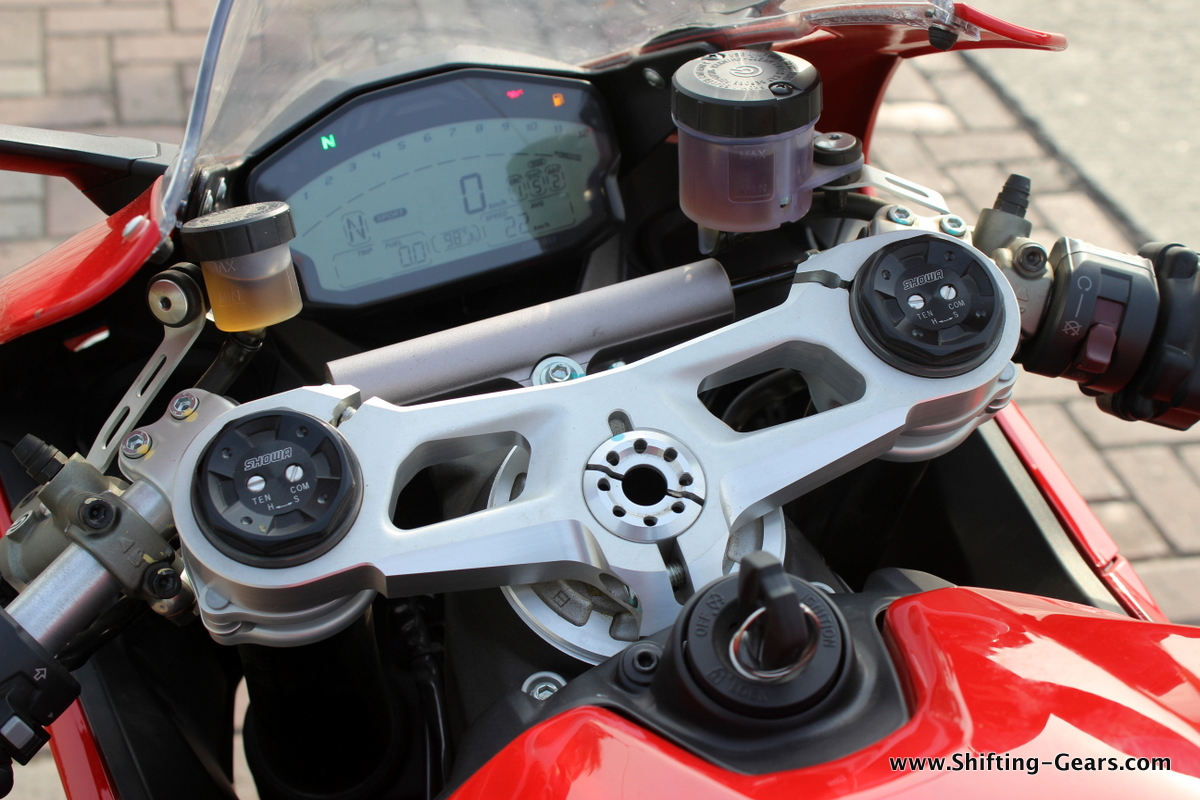 Fire up the Panigale 899, and this is where it might let down those who love aural bliss from their superbikes. As is the case with all twin-cylinder motorcycles, the exhaust note is not really what you would love from a bike costing over 1.5 million rupees. It actually sounds very bad if you compare it to the Triumph Daytona 675R, which is a sweet sounding machine. That aside, even after the choppy sounding exhaust, the NVH levels on the Panigale are top notch, and there is no vibration felt on the handlebar or on the footpegs.

Slot it in first, and there’s a lot of torque available low down to crawl without any throttle input in first gear. Low-end & mid-range performance is acceptable by supersport standards within the city. The bike manages to hold ground well on the streets of Mumbai and the heat dissipation is good too. Ride-by-wire makes way for a very crisp throttle response and within the city, one has to be a bit cautious with the throttle input. Over broken patches, and over speed breakers, the Panigale did a decent job. We had to move it in a cross direction though not to scrape the exhaust. Traction control is rider friendly. Although a bit intrusive for the enthusiasts, it will help newbie riders play around with the motorcycle. The short final drive gearing on the Panigale 899 ensures good mid-rage rideability. This will make it a very good daily ride. 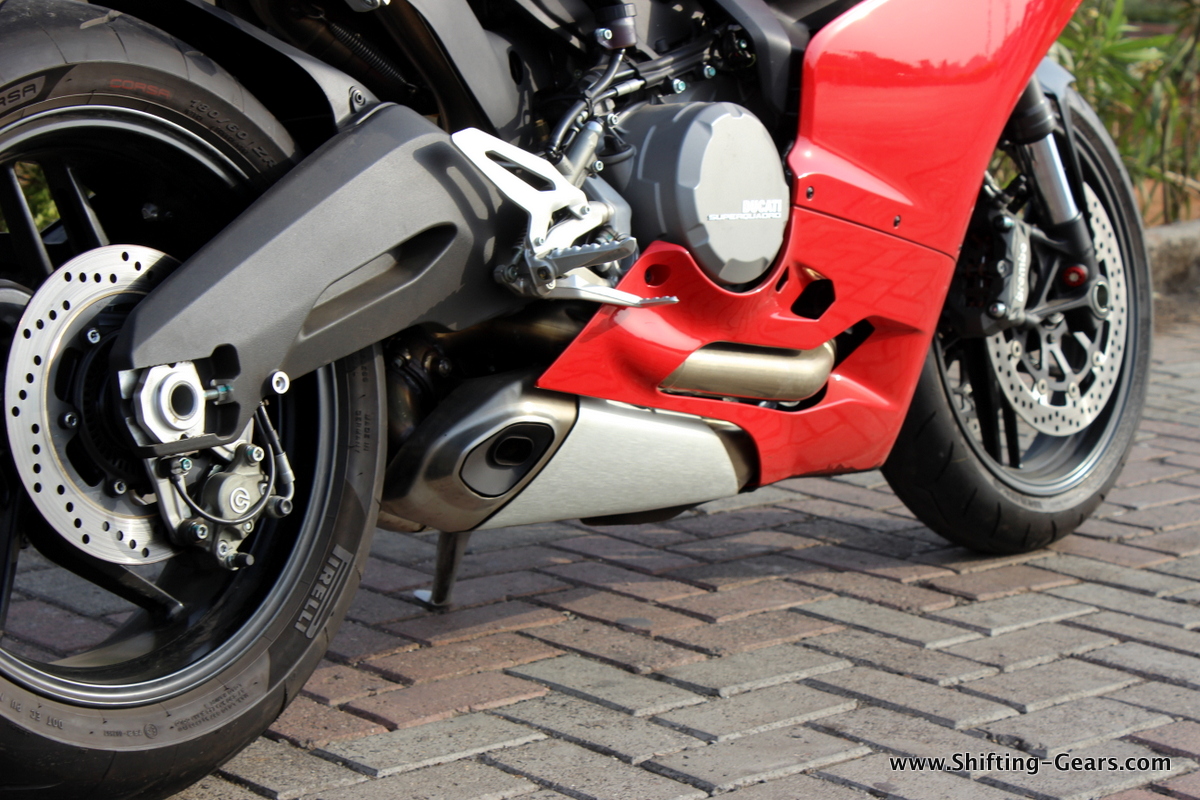 The Panigale 899 offers 3 riding modes – wet, sport & race. In wet mode, the DTC (Ducati Traction Control) comes into play at the maximum level ensuring a smooth ride. EBC & ABS are also 100% in action. Engine in this mode however delivers 100 BHP only. In sport mode, you get the full 148 horses to play with, but DTC, ABS & EBC are still in full play. Race mode is where one can have uninterrupted fun. Race mode unlocks all the 148 horses with minimum DTC intervention and only front ABS with no anti-rear lift.

Hit the highways and the bike accelerates to the redline very quickly. Although the gruff exhaust note is directly proportional to the throttle input and audibly reminds you of what’s happening, the Panigale 899 holds on the the streets nice & clean. Riding close to a double ton is super easy and super quick too with the speedo lighting it up under 10 seconds. In higher gears, don’t expect a blast if you wring the throttle. A downshift is necessary to feel that acceleration surge. Gear shifting is flawless thanks to the quick shifter. Be it your local drag or on the twisty tracks, swapping gears is very quick. We wish Ducati had offered a slipper clutch to round it off well.

At 193 kg, the 899 is not really a light motorcycle. The 899 Panigale’s chassis uses the Monoscocca concept. Different components have been integrated to give shape to a single compact and lightweight element that also enhances the rider’s posture to perfect the riding position. The monocoque structure in cast aluminium for increased strength uses the Superquadro engine as a structural element and allows Ducati Superbikes to be lightest-in-class. The monocoque frame is fixed directly to the cylinder head. In addition to performing the traditional function of a frame, the monocoque also acts as an airbox. The Panigale 899 has a weight distribution ratio of 52% at the front & 48% at the back. But with the rider on, Ducati claims this ratio becomes 50:50. 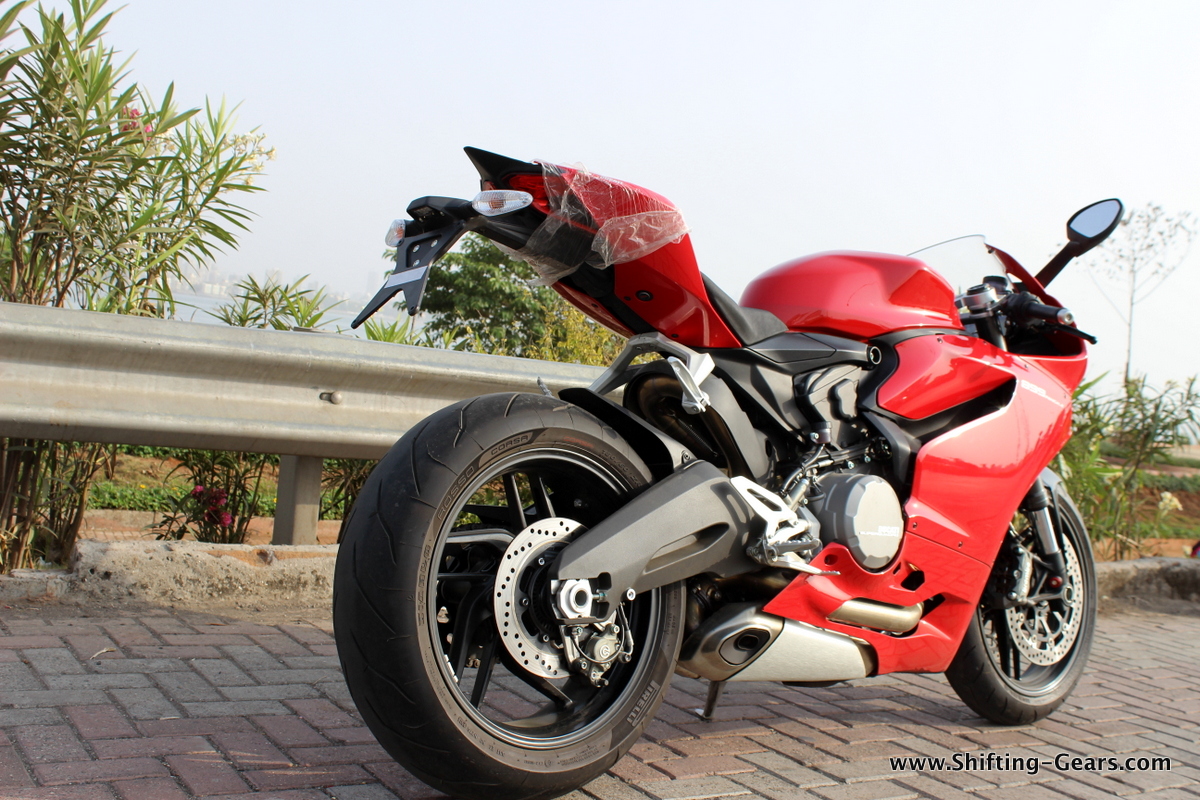 Supersports are not really plush in the ride quality department, and same is the case with the Panigale 899. Suspension setup is stiff, and more suited to enthusiastic riding rather than city commuting. Turn-ins are quick though. Shod with Pirelli Diablo Rosso Corsa tyres, the ride is grippy in wet & dry conditions. Braking performance is also acceptable, and thanks to all the electronic aids, the bike stops in a straight line.

Pitched as a ‘Supermid’, the Panigali 899 is surely going to be a hit in the Indian market. At that price, it comes a bit close to the litre-class Japanese motorcycles, but the equipment & electronic package offered is surely best-in-class. Also, the design language of a flagship is bound to add a couple of stars to your garage. The L-Twin motor offers a perfect package between practicality & supersport exclusivity. So if you were in the market for a middle-weight supersport motorcycle, we suggest you take this one out for a spin. Ignore the not so pleasing exhaust note though.