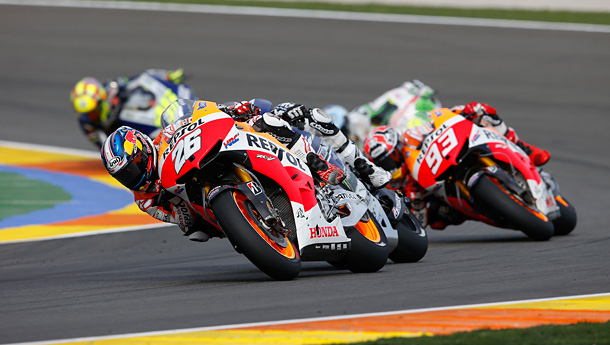 The day 1 at the final MotoGP held at Valencia, Spain was very exciting.

With two free practices on hand, the controversial rider Valentino Rossi finished 5th and 4th respectively. While both the practices were lead off by the other Yamaha star rider Jorge Lorenzo, finishing, well clear ahead of the rest of the pack and being followed by the Spaniard racer Marc Marquez from Honda Racing just by a tenth of a second.

Starting the weekend fifth fastest was a solid start for Rossi and afterwards it was his pace on the used tyre that left him feeling positive about the day.

Rossi told to media, “I’m quite happy, quite satisfied about this Friday because we start well from the morning and especially we work well during the practice and I was able to improve my lap time every exit and also with the used tyre, that here is very important considering the long race and the tyre slides a lot. Also we continue in a good direction in the afternoon and I was also more competitive than the morning – I was able to improve my lap time.We decide to work also with the hard tyres and I was strong, I felt good with the bike and I make some good lap times So can be an option for the race, especially because starting from last I have to go fast for 30 lap to try to recover. At the end we did a comparison with the soft, which is for sure a bit faster and easier, especially in the first laps.The difference is not so big, but you can go a bit faster, so we need to decide which way forward. But in general I’m happy because I ride well, I feel good with the bike and for the first day it is a good performance already with some good lap times. We’ll try to continue like this tomorrow.”

While finishing off first Jorge Lorenzo saw the same negative reactions from the crowd as he had to bear at Sepang Circuit. Audience booing to Lorenzo was not a very good sign and this negativity told a story in itself that’s totally understood. While Lorenzo told media that, “Today was a good day from the morning to the afternoon and we were competitive with the bike,” said Lorenzo. “We started with a good setting made some modifications with the bike and we found that it was better. I also tried the harder tyre and it was worse than the other tyre so it was good work today for the race. We did a 33.1 and knowing that the bike isn’t perfect this is a good beginning.”

Finishing second, the another 21 year old Spainiard  Marc Marquez from HRC thad to face the similar humiliation from the audience, while he told that “This morning I go out, I feel good. For this afternoon we changed some things and the rhythm was good. We tried the hard tyre and then we came back to the soft, but the other people put a new soft at the end and I kept he tyre from the morning with a race distance and still the lap time was 31.4. So I’m happy because the pace was good. I don’t know how is my level with the new tyres, but at the moment looks like again Lorenzo is the strongest one on Friday. Our race pace is very similar. The thing is that I don’t know how is my pace with the new tyre, but I think will be not faster than Jorge. But with the used tyre looks like I feel good like more-or-less in Malaysia. We are using the same style of bike for try to use more the second part of the race and looks like with the used tyre the pace is good.”While the two consecutive race wining HRC rider Dani Pedrosa finished second overall by just a margin of 0.266 seconds on the sheets.

Qualifying would take place today while the final race is all set for tomorrow. Things can get very surprising and the excitement factor is on it’s high, people are dropping off from work just to witness the history as the most fan followed rider Valentino Rossi will be starting from back of the grid at the final race while he is still ahead on the points and closest to win MotoGP championship.