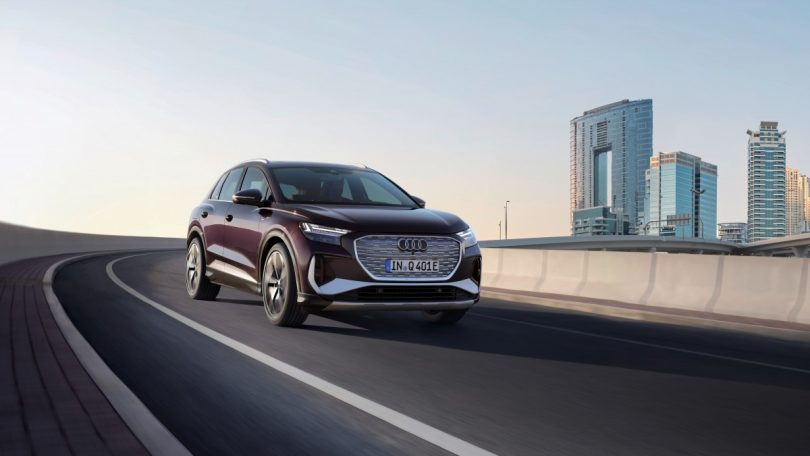 Japanese tire manufacturer Bridgestone has been chosen as the official tire supplier for Audi’s full-electric compact SUV, the Q4 e-tron. The tire manufacturer has ensured to develop custom-engineered, ultra-low rolling resistance summer tires with ENLITEN Technology to fulfill Audi’s requirements. According to Bridgestone, the sustainable and lightweight, ENLITEN Technology tires reduce rolling resistance by 30% and weight by 20%.

The tires also help in extending the driving range of the EV and reducing environmental impact due to improved resource productivity. According to Bridgestone, the bespoke summer tires offer better rolling resistance than the European A label grade threshold. Bridgestone has also ensured to focus on the tires’ on-road stability due to the heavy load implemented by RWD.

The tire manufacturer states that it views this as a massive opportunity to reduce CO2 emissions and enhance sustainable mobility. With these reasons and this opportunity, Bridgestone states that it’s proud to collaborate with Audi to accelerate the electric future. Bridgestone has developed the Turanza ECO summer and Blizzak LM005 winter tires, exclusively for the Audi Q4 e-tron. Currently available for sale in Europe, Bridgestone announced that it has developed and produced the tires in Europe.

At the back, The SUV features LED tailights complemented by a running LED light bar across the tailgate. Powering the top-spec Q4 50 e-tron Quattro is a 77.6 kWh battery that produces 220 PS and 460 Nm. The electric SUV sports a 180 kph top speed figure with a 0-100 kph time of 6.2 seconds. Overall, the top-spec Audi Q4 e-tron offers 520 Km of driving range according to the WLTP test cycle.