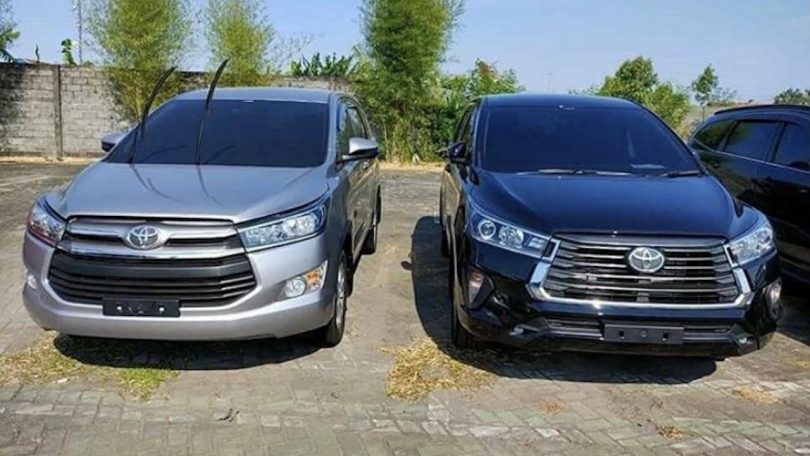 Toyota is planning to bring the mid-cycle facelift of the popular Innova Crysta marketed as the Kijang Innova in the Indonesian market. The new Innova Crysta has been spotted in the South-East Asian market undisguised, inside-out. The facelift model comes with a mildly updated exterior and a few changes to its interior, in terms of the equipment. Here are some notable changes in the new Innova Crysta compared to the outgoing model.

On the outside, the 2021 Innova Crysta features a new grille styling, the basic trapezoidal design is retained but comes with new horizontal slats on the radiator air intakes. The chrome bars on the grille have been replaced by gloss black ones but gets a new chrome bezel. The headlamp units remain the same but the inner ends seem to mingle better with the updated grille styling. The front bumpers also receive a mild update in the fog lamp department, with slimmer fog lights and the new design air dam. While the body design remains unchanged a new design on the alloy wheels can be observed. The complete rear fascia of the MPV also remains unchanged.

According to new the new spy pictures leaked over the internet, on the inside, the new Innova Crysta features the same multilayered dashboard design but comes with updates such as a new larger touchscreen infotainment system which slightly juts out of the dash fascia instead of sitting flush with it. Sources also indicate that the Multi-information Display (MID) been updated with a colour TFT display. The climate controls and ambient lights have also been updated on the facelift model. The new Innova Crysta is also likely to come with a new smart key on the top-spec model along with a new LED stop lamp.