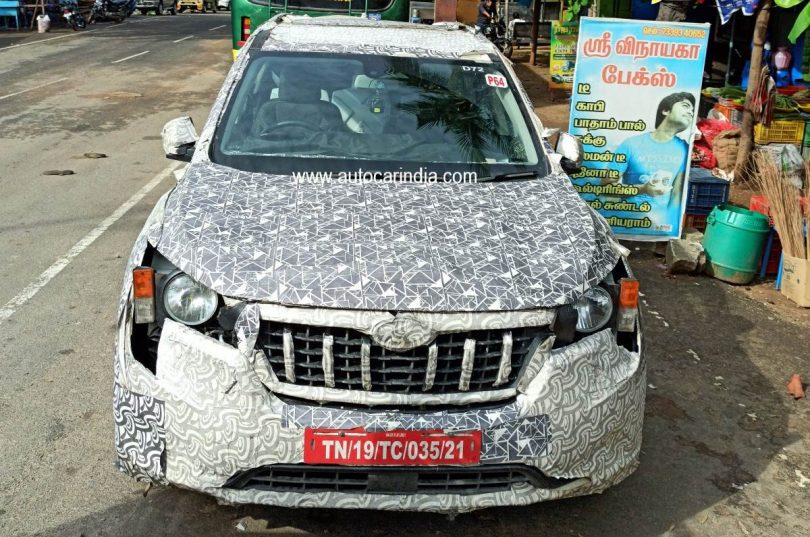 A steady stream of spy shots has been surprising us showing the possible features on the upcoming next-generation Mahindra XUV500. Regular readers will know that spied test mule of the XUV500 has been spotted with features such as LED tail lamps, twin displays on the dashboard similar to the Mercedes-Benz integrated with the fully digital infotainment and flush-mounted door handles, features that are only seen on luxury SUVs.

But another notable feature that a recent spy shot of the front end of the SUV leads us to believe that the next-generation XUV500 is also likely to get Advanced Driver Assistance System (ADAS) making it Level 1 Autonomous compatible. The latest picture of the SUV reveals a forward-looking camera mounted on the windshield integrated into the IRVM housing and a sensory unit mounted on the lower part of the bumper. The lower sensor could be a radar used for ADAS, but it remains unclear what all features will the SUV get.

The next-generation XUV500 is likely to get Adaptive Cruise Control, Forward Collision Alert, Forward Collision mitigation, Lane Departure Warning and Emergency Braking, features that were recently seen on the MG Gloster SUV. If the next-generation XUV500 is introduced with these features it will be able to compete with SUV higher than its segment in the Indian market.

Earlier spy shots on the interior revealed that the Mahindra XUV500 is likely to come with a fully digital instruments cluster and a touchscreen infotainment system behind a single pane of glass, the SUV is also likely to get automatic climate control with rotary knobs and a multifunction steering wheel. It is also speculated that the new infotainment system could have connected features as well as Android Auto and Apple Carplay integration along with premium features such as wireless smartphone charging.

The Mahindra XUV500 is expected to debut in the first half of 2021 and with features such as ADAS, flush-mounted door handles and Mercedes-like twin displays the brand is likely to attract customers from its competitors like the MG Hector and the Tata Harrier.