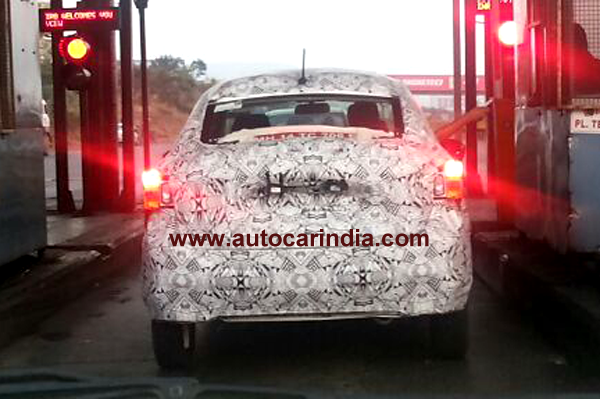 Tata has tasted a good amount of success with the Zest compact sedan, and expects the same with the Bolt hatchback which will be launched in a couple of months. Now, the company is looking lower down the segment to refresh their product portfolio and provide fresher looking cars in their respective segments.

Tata Motors will replace the ageing Indica ev2 and Indigo eCS in 2015. The hatchback replacement, codenamed as the Kite has already been spotted testing multiple times. This time however, spyshots have emerged of the Kite compact sedan which is expected to replace the Indigo eCS.

Heavily camouflaged, the car doesn’t reveal too many details about itself.

Powering the Kite compact sedan could be a new 1.2L petrol motor as well as an in-house developed, new 1.05L, 3-cylinder diesel motor. Chances are Tata might also plonk the AMT gearbox considering how popular it has become in the market.

The exterior profile reveals a steeply raked rear windscreen, a roof mounted short antenna, number plate housing on the boot and crease lines on the rear bumper. Tail lamps seen are not production-spec and meant for testing purpose only. Interiors are also expected to be a step-up considering how things changed with the Zest.