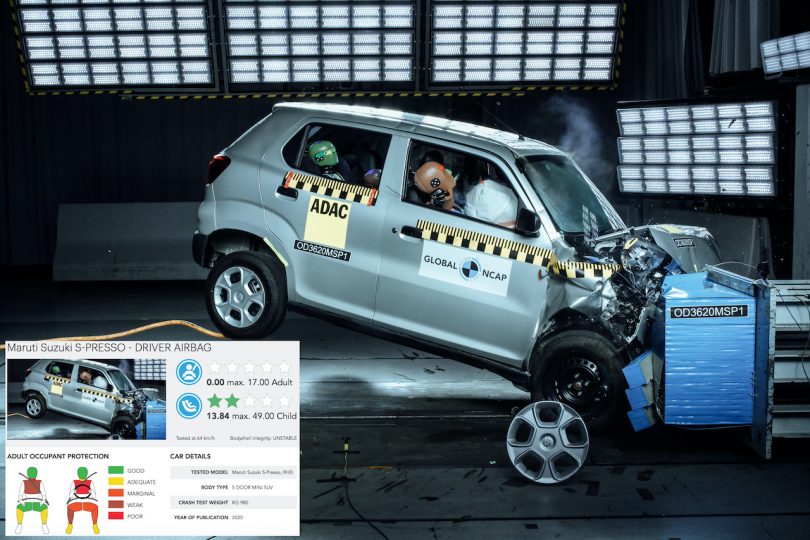 The Maruti Suzuki S-Presso’s Zero-Star rating has grabbed everyone’s attention not just in the Indian market but also in the global market where the car is sold. A Tweet from a customer from the South African market expressed concerns over the S-Presso, to which Suzuki South Africa replied that the “the vehicle tested is the lower grade variant in India”, and further goes on to explain that the Maruti Suzuki S-Presso in the Indian market features only one airbag and no seatbelt pre-tensioners and load limiters.

The Suzuki S-Presso in the South African market is sold with dual front airbags for both driver and passenger, front seatbelt pre-tensioners and ABS as standard. The official Tweet also explains that due to the difference in the safety equipment, both vehicles are not directly comparable in terms of safety. The Global NCAP which also crash tests and reports motor vehicles in the South African market under their SaferCarsForAfrica initiative has not yet crash-tested and assessed the Suzuki S-Presso.

The Maruti Suzuki S-Presso tested by the Global NCAP was equipped with driver’s airbag, three-point seatbelts, seat belt reminder for both driver and passenger as well as ABS. The car was not equipped with passenger frontal airbag, side body airbags, side head airbags, driver knee airbag or front seatbelt pre-tensioners or load limiters. However, the STD (O) model which is one step above the base variant, features front seatbelt pre-tensioners and load limiters as well as a passenger-side airbag. It also features sun visors on both driver and passenger to cut the sun glare. The STD (O) is INR 6,000 more expensive than STD.

The SUV inspired car measures 3565mm in length, 1520mm in width, 1549mm in height, 2380mm of the wheelbase and weighs in at 726 kg and boasts to accommodate 5 passengers.  It is powered by a K10B series BS6 emissions-compliant 998cc petrol engine with a recently-launched Bi-fuel (Petrol/CNG) option that produces 60 Hp of power and 90 Nm of torque matched to a 5-speed manual transmission.

The Maruti Suzuki S-Presso is priced starting from INR 370,500 ex-showroom, Delhi which roughly converts to ZAR 77,200 plus taxes. 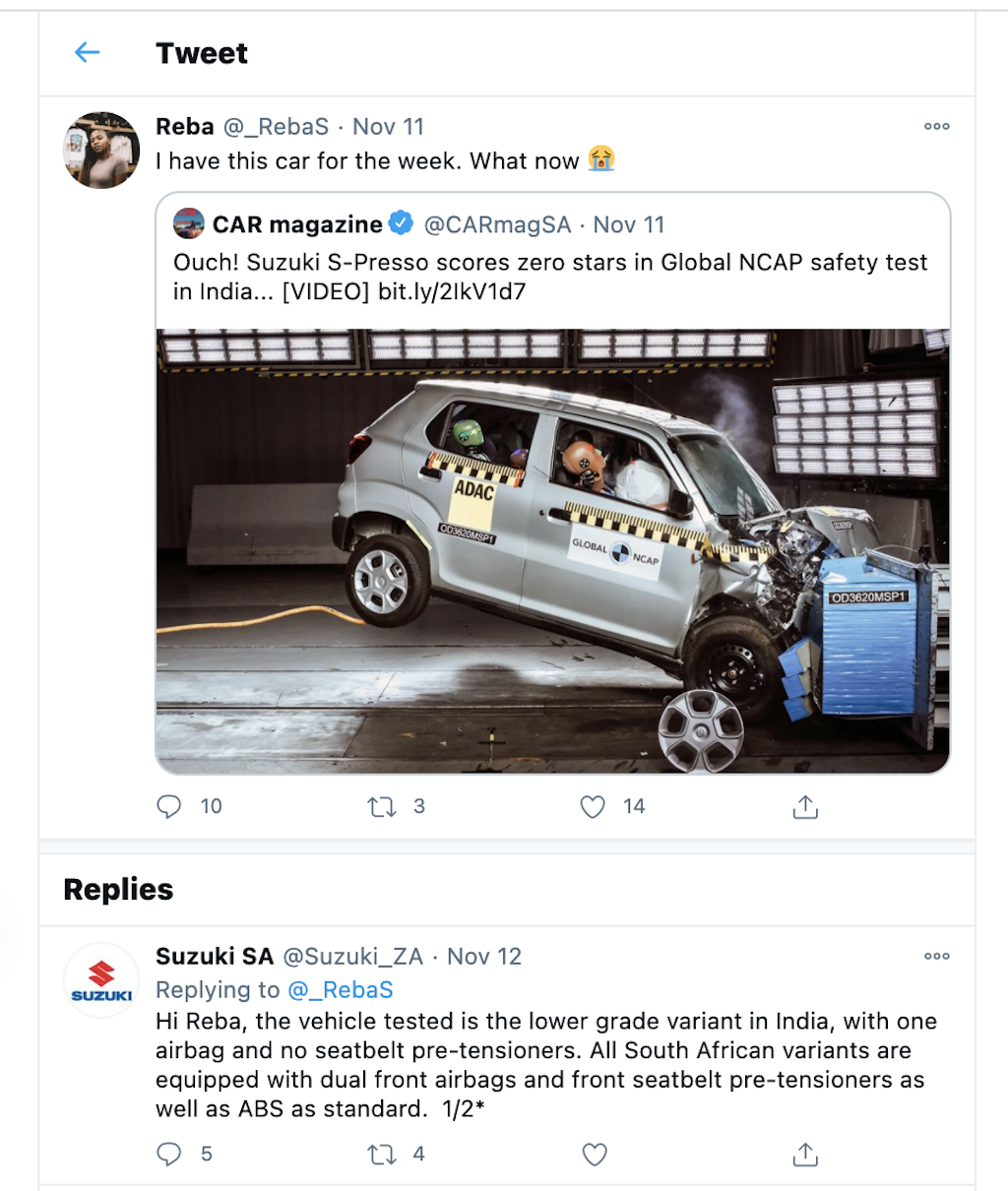 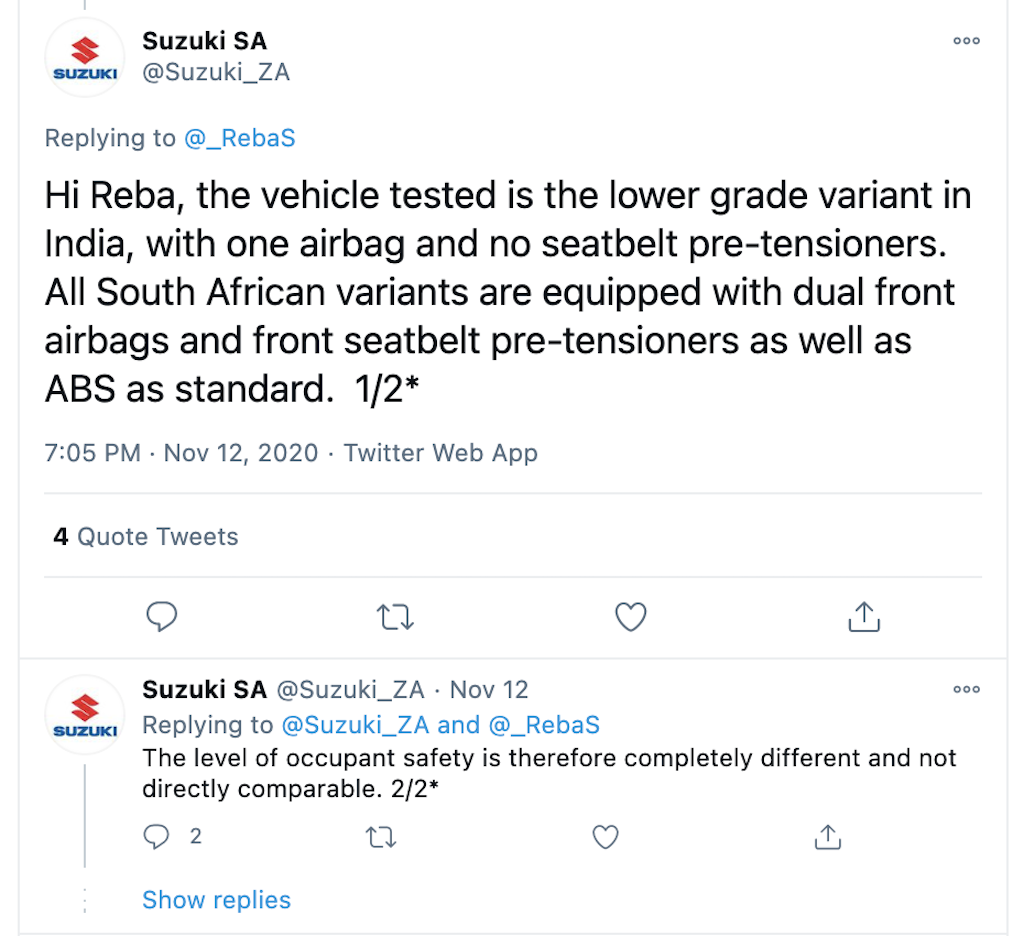