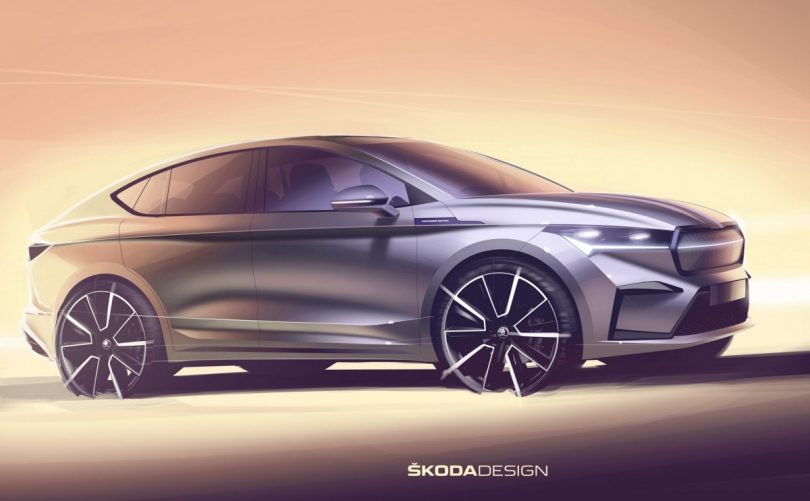 The Skoda Enyaq Coupe iV claims to come with not only an elegant design but is one of the most aerodynamic cars. The Enyaq Coupe iV features a drag coefficient of cd 0.234, setting new benchmarks and improving the already excellent value of the Skoda Enyaq iV. According to Skoda, the new and efficient aerodynamics are thanks to the new body shape. The roofline of the Enyaq Coupe iV slopes gently towards the rear, starting from the B-pillar of the vehicle. The roofline also merges into the tailgate and features a sharp breakaway edge.

On the rear, the Enyaq Coupe iV features SKODA lettering in block capitals below a sharp tear-off edge. The Enyaq Coupe iV also comes with Skoda’s signature C-shaped rear lights. The front of the vehicle is characterised by a prominent Skoda grille flanked by flat, sharply cut headlights that emphasise the vehicle’s width.

The Skoda Enyaq Coupe iV also comes with a panoramic glass roof as standard. The imposing Skoda grille also comes with Crystal Face, consisting of 131 LEDs that illuminate the distinctive SKODA grille. The brand also revealed that Full-LED Matrix lights would also be offered as an option. On the inside, the Enyaq Coupe iV will come with a personalised 13-inch central touchscreen, an optional head-up display, seating space for five and a 570-litre boot.

Powering the Skoda Enyaq Coupe iV will be a choice of two battery sizes and three power variants. The brand has not indulged any details of the power unit but revealed that the electric coupe would come with rear- or all-wheel drive. Skoda also reveals that the Enyaq Coupe iV will be capable of returning more than 535 km in the WLTP cycle when fitted with the larger battery. Also, the EV will come with a fast-charging feature as standard.