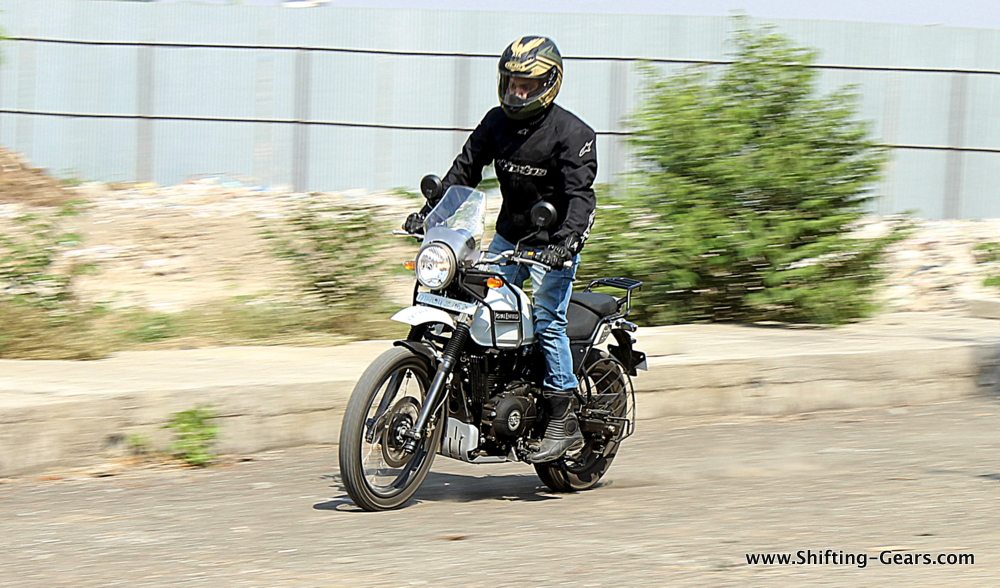 When you talk about a Royal Enfield motorcycle in India, the one thing that comes in your mind is ‘Touring’. It’s not uncommon to see a pack of RE’s riding along the highway in all parts of India into some or the other destination. The bike has been a cult following in this country and it will forever continue to be so. So when they announced that they are coming up with a sport touring adventure motorcycle last year, boy did they get everyone up on their heels. And here it is, the all new Himalayan. We were invited to test this bike in Bombay towards the end of the summer. 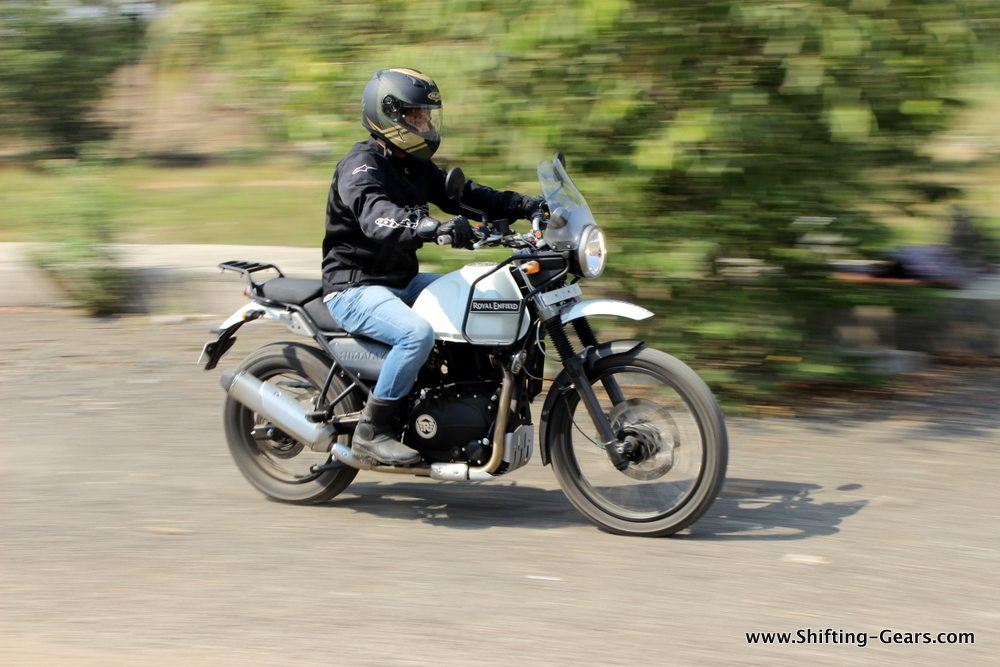 I’ve been riding a Royal Enfield for the last 8 years and honestly I am a fan considering the long persevering journeys I’ve had on my bullet. I may be considered as a do-it-yourself person and I have always been impressed with its durability no matter how hard or wherever I pushed my bike. When I first heard about the Himalayan I was really happy considering the fact that an adventure setup is what is required from RE since a while and the whole purpose of the bike would be justified to what it actually is meant to be.

Design:
The bike wins and looks like a pure bred endurathon capable set of wheels at its very glimpse. They have come with a base variant in this model which would just be the skeleton and no extra touring fittings as you must have seen in the teaser photographs. The Himalayan completes the package the moment you add on the extra jerry-cans, exhaust canisters, panniers and the silver heat shields. You could also add-on the crash guards and the matte black finish handlebar. The panniers would add on to 35 kgs of weight and the fuel cans are capable of filling upto 5 litres each. All these additional accessories come in with extra costs. 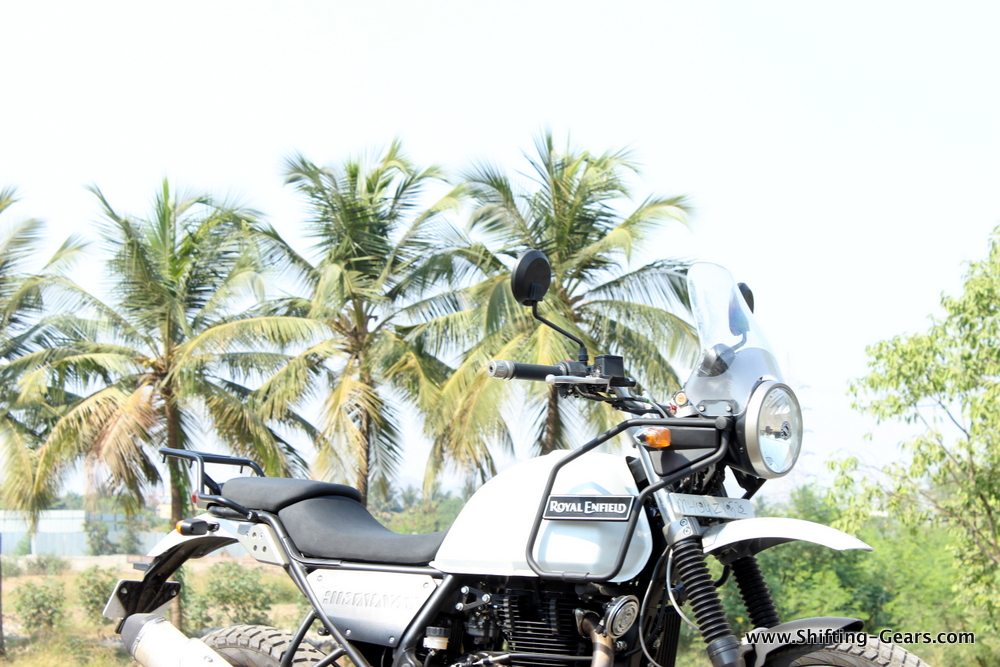 The bike is truly purposefully built and you would know it the moment you see it. The tall stance is heighted at 220mm of clearance which is the highest in its class. The front wheel is 21” and the rear chunky wheel is 17”. This allows the bike a 180mm movement. Then there’re parts like the wind screen, the bash plate that protects the engine, the arrangement for panniers to be mounted by the 15-litre tank or out back, all which add up to one robust looking motorcycle.

Detail and thinking has gone into the construction of this bike. The front fender is built in such a way that the headlight is protected from debris due to the beak like shape and the lower part prevents any kind of dirt from entering the engine bay. The chassis designed by RE is termed as a half-duplex cradle frame which is designed for particularly mounting luggage. This is a great feature as one does not have to carry out any kind of extra modification on this bike. 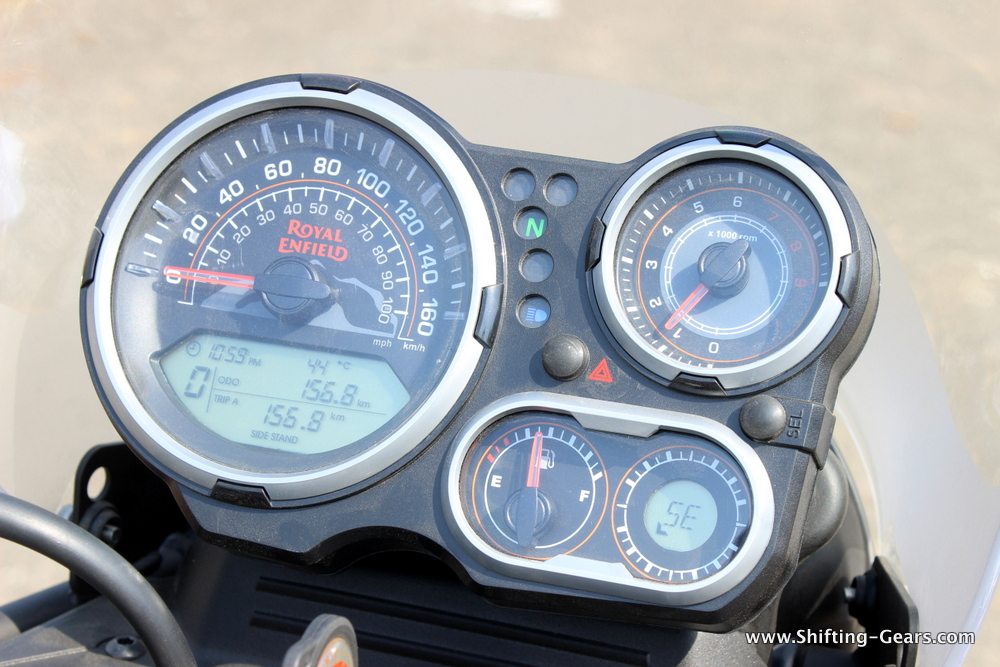 Besides the really commendable fit with finishing on this bike, what I really liked is the layout of the instruments on this bike. Its multi colored with a readout that comprises of an analogue speedo, tacho and fuel level indicators. The digital bit consists of the gear indicator, twin trip gauges, average speed and ambient external temperature.

To inculcate the impedance of a tourer, RE has even gone ahead and given a magnetic compass on the console. Another thing they have introduced here is a fuel trip. When you’re riding real low on fuel, the regular trip switches into a low fuel trip which tells you the remainin distance to empty and how many KMS you have covered in the last 1.5 litres. Essential details considering you are riding in the middle of no-where but still know your bike well enough to take you back to civilization.

Ergonomics:
The front suspension is a 41-mm telescopic fork with 200-mm travel. It hoists  a 21″ wheel wrapped in 90/90 rubber with a 300-mm disc brake. At the rear is a 17″ in 120/70 rubber and a 240-mm disc brake that is placed with the company’s first ever mono-shock suspension. The link-type unit allows for 180-mm travel and is tuned for an excellent ride be it on or off road application.

Even with those specs, the 800-mm seat height makes it a comfortable bike for people not so tall, and doesn’t seem as intimidating as bigger adventure bikes already on sale. This is where the Himalayan wins in being an excellent touring bike for a first timer to begin with.

Royal Enfield has kept in mind to make the Himalayan not just accessible but truly approachable. The handling on this bike is superb and unlike any other RE I have ridden. Step up on the foot pegs and wham the throttle. And she can do rain, mud, slush, ruts, snow, ice and, of course, tarmac, with ease.

What RE have done here is, inspire even the smaller commuter to jump from 10-15 BHP to the sturdier 25 BHP range with ease and ability to use the power of this motorcycle without a sense of fear. Truly for those who want to get going with confidence into the long way of touring. 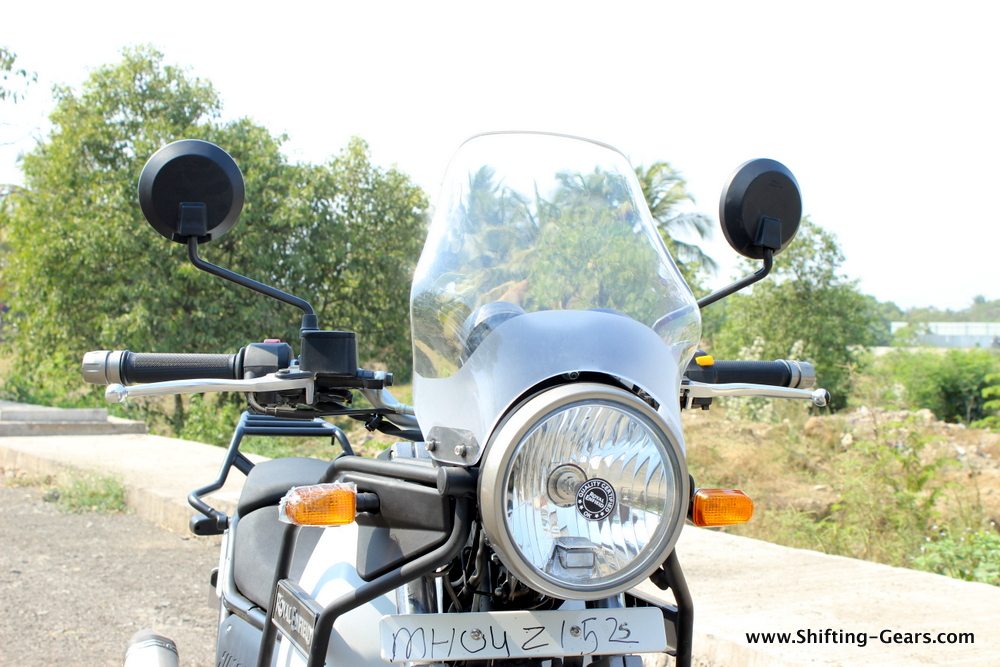 Engine, performance and handling:
The Himalayan get an all new refined UCE engine from Royal Enfield. This particularly has really less vibrations and on the first pull itself I could get to speeds exceeding 125kmph effortlessly. The introduction of an Over Head Camshaft could be the reason for such a smooth engine. The torque is now more linear and distributed evenly to all rev range, when compared to the 500cc UCE engine of RE Thunderbird or Classic 500, the low capacity engine of Himalayan feels more refined and powerful. The gears are also smooth and you can feel the work done by the Royal Enfield engineers on this forefront as well.

This new motor is called an LS410 and displaces 411cc. It’s an air cooled single cylinder engine which is carbureted producing 24.5 BHP and 32 NM of torque. The Himalayan like every other Royal Enfield is not built to rip apart at high revs. The maximum torque is produced between 4000-4500 RPM while she maxes out at about 5200 RPM. Surprisingly this is the fastest revving RE till date. The engineers have introduced a balancer shaft which tames down this power delivery and doesn’t make her engine vives go off the roof. I think this has worked very well for the Himalayan. 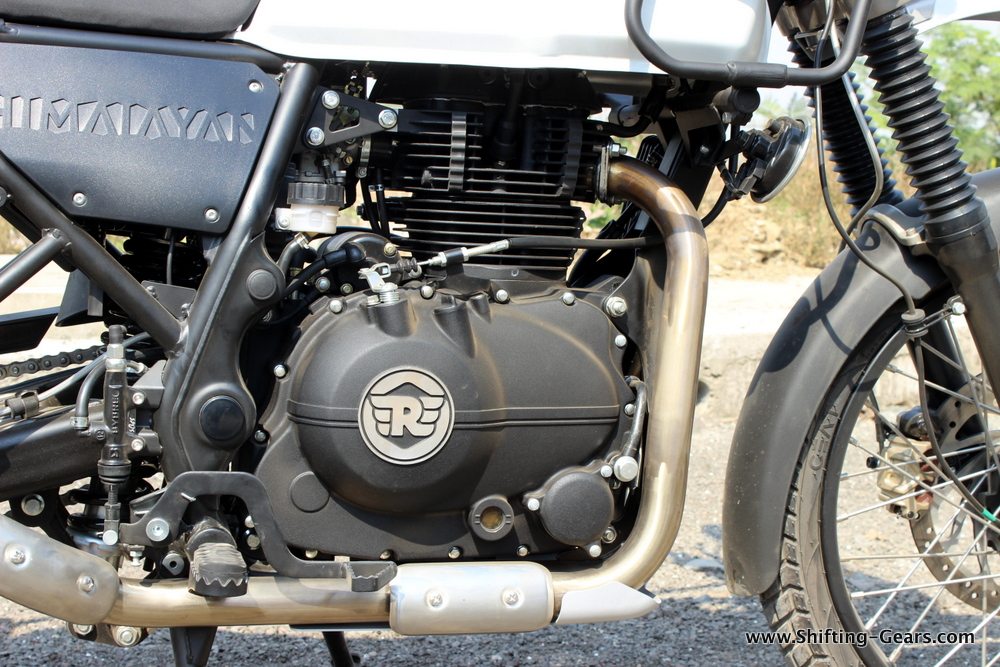 The sad part, the bad part and the most disappointing part if you ask me is the lack of more BHP. As a first time newbie this should just work fine but as a rider, I wish the engine was a tad 10 BHP more powerful. I wonder when the engineers at RE will decide to move out of the 20-25 BHP bracket. Apart its mated to a 5 speed gearbox with a clutch that does feel a little notchy. There is no ABS offered and I don’t think it’s even required as the knobby Ceat treads work just fine be it on any terrain.

To sum it all, the new engine is certainly a breakthrough for RE but they could definitely plan to launch an upgrade based on their sales with a much more powerful engine sometime next year or whenever it is they design to up step themselves and get into the more competitive Indian market. 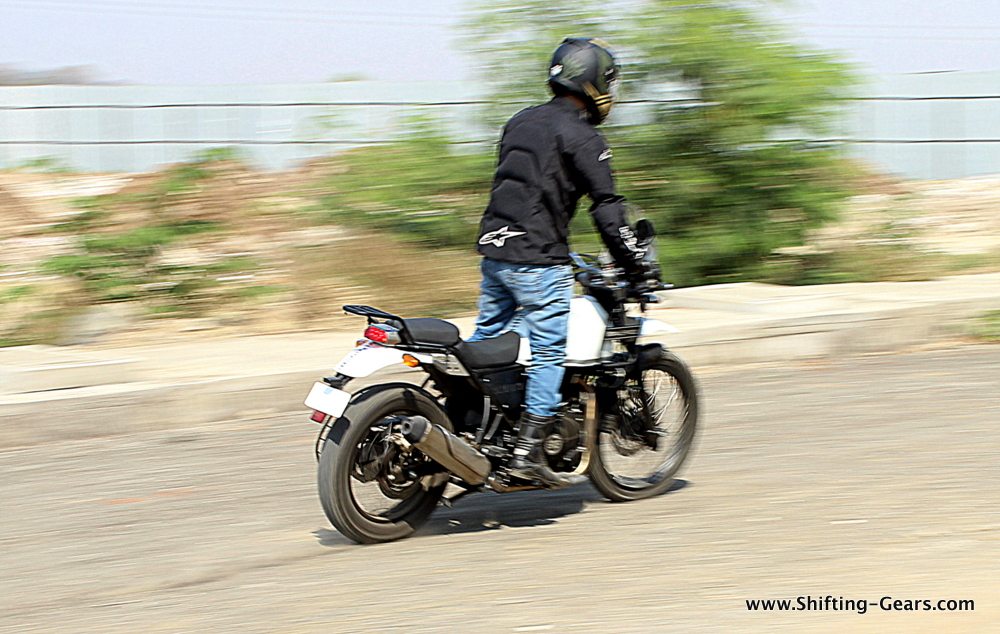 This is an all new bike from Royal Enfield. I mean it. It is not your typical RE bike with the typical exhaust note and feel of having that iron fist on the road. Those who are fans of the old school bullet will not relate to the Himalayan. This bike is a whole new genesis for Royal Enfield and definitely an introduction in India for the open touring segment.

Just as Hero nurtured the segment and gave us a brilliant bike called the Impulse 150 in the baby touring segment, I think this is what RE have done here. Even KTM has failed to cash in on its rich off-road legacy, shying from being adventurous in India. This motorcycle is adventure from the word go and finally after decades of being in India, Royal Enfield have made their mark with this bike. Load it up with saddle bags, panniers, fuel cans, luggage, spares, GPS, supplies and every other little goody you can imagine and she is ready to be taken all over the country with absolute ease and surety as to make your own road and tread ahead. They are pricing her at 1.70 lacs which is a welcoming for this bracket. We would only know how she performs and endures in the long run as the sands of time keep falling…