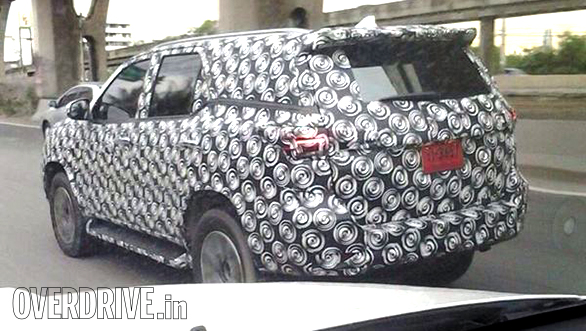 The new SUV will be based on the Toyota New Global Architecture or TNGA platform. The new Fortuner seems to have slightly less bulk on the front end compared to the previous generation. It is more curved or rather round than the boxy design it had with the current facelift. Headlamps also seem to have gone through a diet and look much slimmer than before. Redesigned front bumper and front grille is expected to carry forward Toyota’s new design language, which the Innova was recently spotted with.

Going with the current trend, the new Fortuner as seen in the pictures will probably get 17″ diamond cut alloy wheels. The rear end is noticeably different too; with wrap around, horizontally placed tail lamps and a new better looking rear wiper. The tail gate is also redesigned and the cut out for the number plate housing is different too. The car also has a shark-fin antenna to add a little more to the style quotient. The side profile differences are not too visible because of the camouflage, but we can notice that the ORVMs get integrated blinkers and the door handles are in chrome. Also, the second row window appears to be a little different.

Launched in 2009, the Toyota Fortuner has been the segment leader ever since. It is currently available with a 3.0L diesel engine pumping 168 BHP coupled with a 5-speed gearbox. 4WD and 2WD options have been available too. It is going to be a long wait to have full details about the engine specifications of the next generation Fortuner with us. The SUV is expected to be launched either in 2015 or 2016.