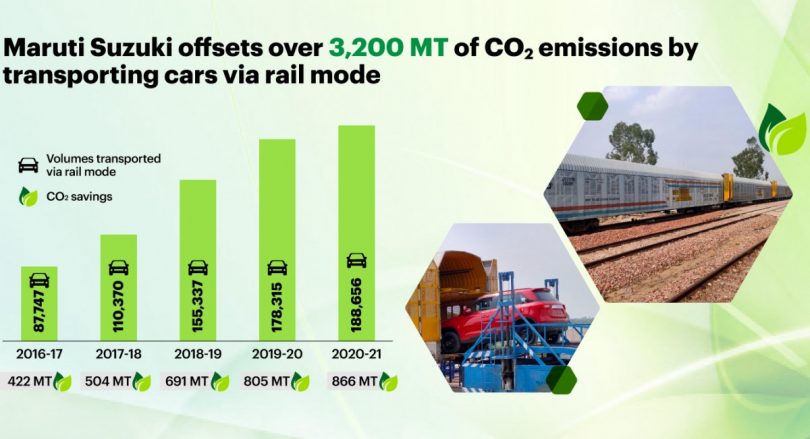 Maruti Suzuki has announced that over the past five years, 7.2 lakh vehicles have been transported using Indian railways. Furthermore, more than 1.8 lakh vehicles have taken the rail route in 2020-21. This is the highest-ever railway despatch by Maruti Suzuki, compared to the 88,000 units dispatched in 2016-17. The brand also announces that the railway route has helped the company offset over 3,200 Metric Tonnes of cumulative CO2 emissions.

Benefits of the Rail Route

Maruti Suzuki has been using the Indian Railways since 2014 and slowly increasing its use in vehicle transportation. In 2020-21, the brand transported the equivalent of 13% of its total sales via the route. The rail route is not only safer than road transport it is also timely. But the most important factor is that it is greener than road transport. The environmentally friendly mode of transport also reduces congestion on highways. This makes more space available for other road users. The transport time is also shorter and the brand can save couple of days lost in transit, via the rail network.

Further enhancing the twin-deck rakes brings the carrying capacity to 318 cars and the speeds up to 95 kmph.  This is the highest speed for any goods train in India. The larger capacity and higher speed brings in operational efficiency. Maruti Suzuki is using 36 high-speed and high-capacity rakes to despatch its finished vehicles. The brand is also the first car manufacturer to obtain the Automobile Freight Train Operator (AFTO) license.