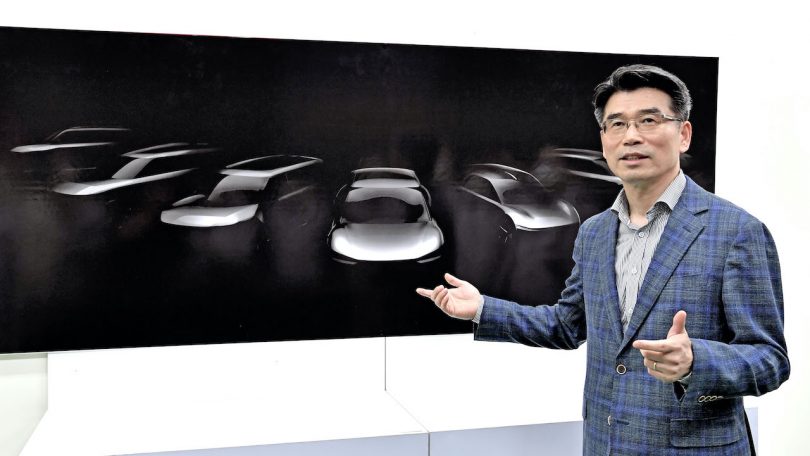 Kia Motors Corporation has revealed the brand’s future product plans and shared a glimpse of the South Korean manufacturer’s global electric vehicle (EV) business strategy, revealing an early sketch of the company’s future dedicated Battery Electric Vehicles (BEVs) that will make their world debut by 2027, across several vehicle segments. The Future EV Product Strategy was shared by the Company’s President and CEO Ho Sung Song during an event at Kia’s Hwasung manufacturing facility in Korea.

Kia has also revealed that the brand’s first dedicated battery electric vehicle, codenamed CV has been confirmed for its debut in 2021 and will push the brand into a new design direction. Kia aims to establish a leadership position in the global EV market and the brand plans to partner with EV charging companies worldwide along with the introduction of a diverse range of BEVs to strengthen the brand’s goal and timeline. The brand with the accelerated efforts will be able to meet the fast-growing global consumer demand for EVs.

Since Kia launched the Ray EV, the brand has sold more than 100,000 BEVs worldwide, and by refocussing the business strategy to electric vehicles Kia aims to cover the BEVs that will account for nearly 25% of the brand’s total worldwide sales by the year 2029. The brand under its ‘Plan S’ strategy, that was announced earlier this year revealed that Kia plans to expand the battery-electric vehicle line-up to up to 11 models by 2025, aiming for 20% sales in advanced markets such as Korea, North America and Europe.

Kia revealed the sketch of seven dedicated BEVs that will be launched by 2027, first of which will be the CV, slated for its reveal in 2021. The brand also announced that the company is going through a transformation to realise the above-mentioned Plan S. Kia also plans to develop diversified models for urban, long-range and performance driving. The brand will be adapting the new Electric-Global Modular Platform (E-GMP), to offer customers best-in-class interior space as well.

The brand also plans to expand the EV infrastructure by increasing the number of dedicated EV work bays in Korea to 1,200 by 2030, to 600 worldwide by the end of this year and more than 2,000 by 2023. Furthermore, Hyundai Motor Group will install 120 Ultra-Fast Chargers by 2021 in urban centres and 12 highways in Korea.

Kia will also be employing more than 2,400 EV chargers in Europe and more than 500 in North America, in partnership with the brand’s dealership network.