Not everyone who goes to the gym is a big time weightlifter. Some go there just to bulk, so that they can pose better. Same is the case with cars in this segment. The sub 10 lakh rupee hatchback-cross segment is full of pseudo off-roaders. These cars look bulky, but are based on their hatchback siblings which makes them more of a regular tarmac scorcher & not an SUV which can tackle broken roads with aplomb. Also, not that this segment is very fast moving either. Cars such as the Volkswagen Cross Polo, Toyota Etios Cross & Fiat Avventura have been in the market for quite some time, but rarely do you see one on the streets. Rare is the word for this breed of cars. But that didn’t stop Hyundai from getting to their drawing board.

Hyundai has been riding high on the success of the Elite i20 hatchback. Currently one of the most pricey hatchbacks, it managed to sell well over 10,000 units in February 2015; which is a very respectable number. Considering how popular the Elite i20 is, Hyundai is confident that they can convert a few potential customers towards the i20 Active. Will this cannibalize the Elite i20 sales? Only time will tell. We’re not sure if the market is ready and willing to buy a hatchback to have some mild off-road fun, but the i20 Active surely looks good. If we may, it is actually one of the best designs in this segment; may be second to the Avventura. Segment benchmark is what Hyundai strives for, and the i20 Active is no different, top-notch build quality inside-out will surely help it stand out amongst competition.

Every manufacturer recently comes with a new name for this category. Hyundai calls the i20 Active a ‘SSV’. SSV stands for Sports Styled Vehicle.

The i20 Active will be available in 5 variants; 2 petrol and three diesel: (Prices are introductory & ex-showroom Delhi)

Hyundai Elite i20 Vs. i20 Active, here’s what’s changed

Exteriors:
The Hyundai Elite i20 is quite a looker by itself. So while building another version around the Elite i20, Hyundai already knew that the outcome wouldn’t be too bad. Yes, looks are subjective, but one must agree, that the i20 Active is much better looking than the Toyota Etios Cross & Volkswagen Cross Polo. A lot of work has gone into the development, and it shows on the exteriors. 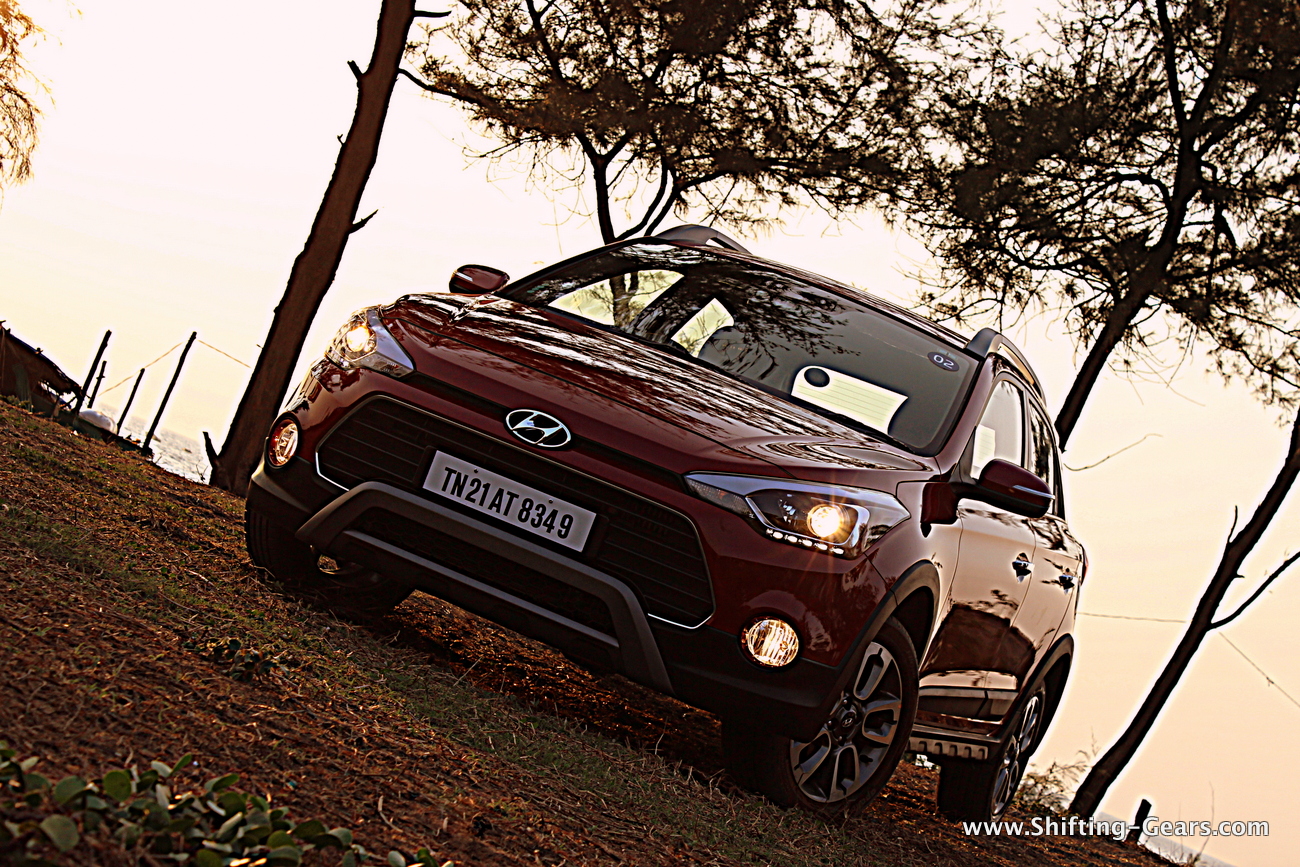 At the front, the most noticeable change compared to the Elite i20 is the bolder bumper. It is seen in dual done, black & body colour with a silver skid plate as well. The blackened section on the lower bumper will avoid basic scratches when driving over roads less known. Above, the hexagonal air dam is now inverted, compared to the regular hatchback. The i20 Active gets a new headlamp setup with projectors and LED DRLs. It also features cornering lamps. The front fog lamp design is now changed to larger, round units. The split between the bumper & the bonnet also gets a chrome accent, unlike the honeycomb mesh on the regular version. Bonnet does not get any sheet metal changes. 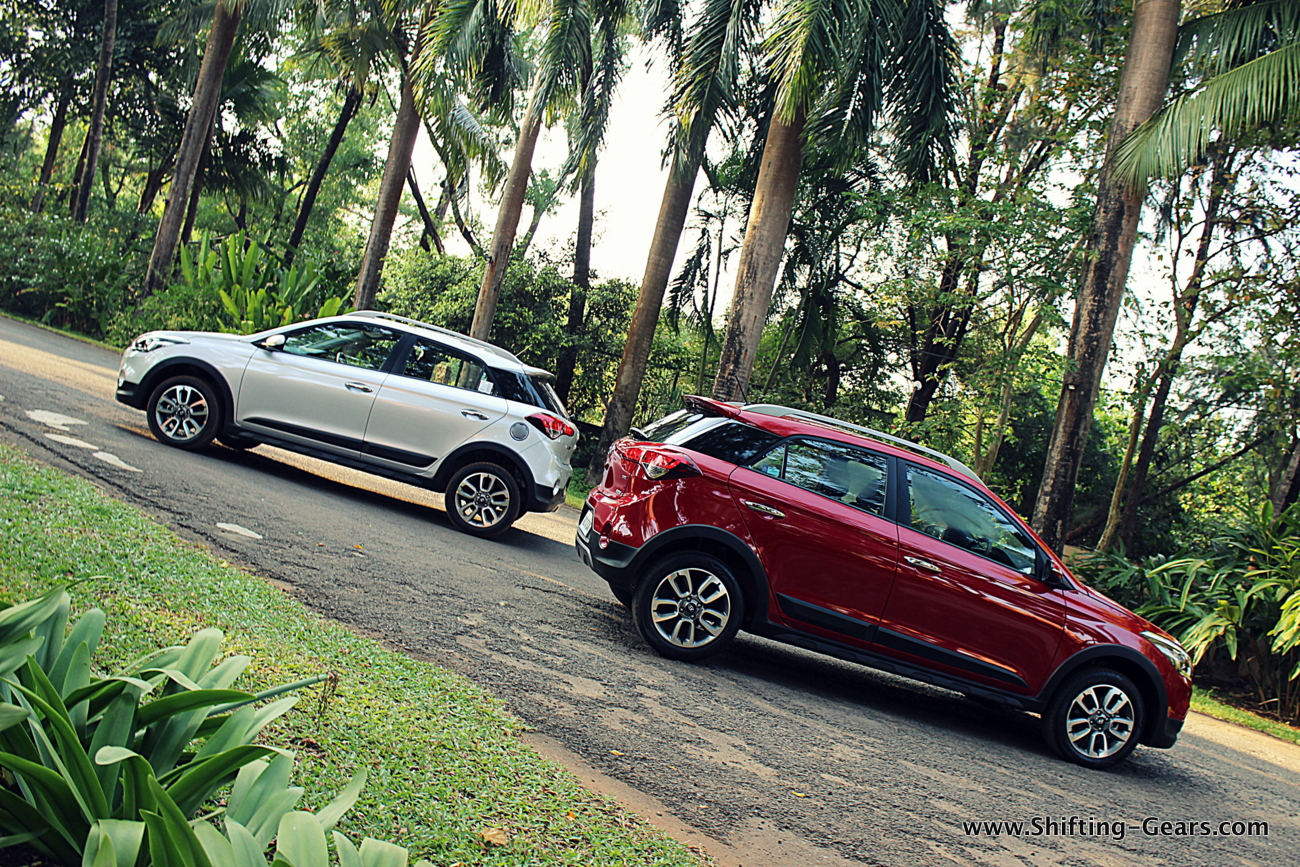 Come to the side and the i20 Active looks visibly taller than the Elite i20. All this thanks to the enhanced ground clearance and the addition of chunky roof rails, painted in silver. The thick body cladding all around the car does lend it a rugged look. Both wheel arches are neatly covered with this black cladding, in equal thickness. Cladding on the side skirt area has a knobby effect and stands out well. The side body moulding on the i20 Active is more matte / dull compared to the unit on the Elite i20. May be the plastic used is different. Doors & door handles, crease lines, ORVMs everything remains identical. Fuel filler cap is a silver coloured  unit, and looks a bit cheesy. C-pillar on the i20 Active is finished in gloss black, while the Elite i20 has a matte black effect. The i20 Active also gets 16″, 10-spoke, diamond cut alloy wheels. 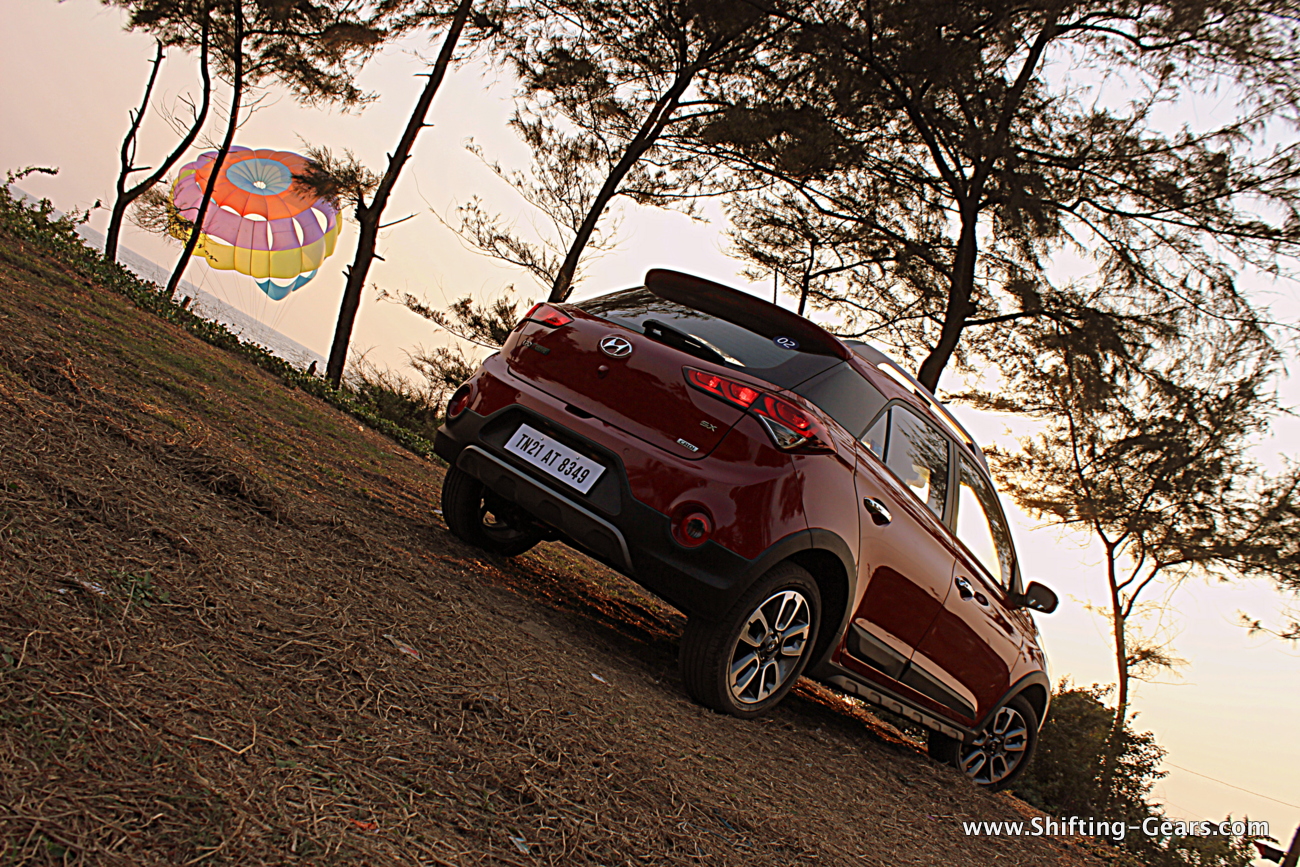 Come to the rear and we’re glad Hyundai did not touch the tail lamps. They’re outstanding the way they are, and remain the same on both the i20 versions. The rear bumper also is a dual-tone, black + body colour combo with a silver skid plate in the centre. The rear bumper now houses two large, round shaped bumper reflectors. The reversing lamp is mounted within this reflector, on the RHS. The roof spoiler on the i20 Active is also slightly larger, and more prominent. Roof mounted antenna has been changed to a shorter unit, probably swapped from the Grand i10.

Overall, the exteriors have been redesigned well, and the car surely stands out when parked side-by-side to a regular i20. We drove the car for over 100 km in Goa, and almost every Elite i20 owner gave the i20 Active a second look. Seems like it is a job well done, eh?

Interiors:
Interiors of the Hyundai i20 were always a premium story, right from the first generation model. Things simply got better with the Elite i20, and all that class is carried forward in the i20 Active. But yes, there is some refreshing change. 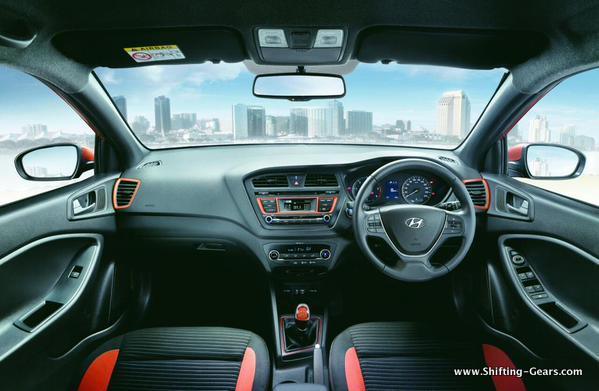 Overall dashboard layout remains the same, but the i20 Active doesn’t get the usual dual-tone beige & black colour combination like the Elite i20. The i20 Active on tries to add some more funk and offers two interior colour options. One is black & orange where you get orange inserts on the dashboard & seats. The other is a combination of blue with this light blue shade on the dashboard top, blue inserts on the doorpads and the seats also get a lot of this blue. All this although similar in design & panels to the Elite i20, the new colours are a refreshing change and will attract those who love something different. We must mention though that the variants with the blue interiors feel a lot more bright and airy, compared to the orange + black, which feel a bit claustrophobic comparatively. 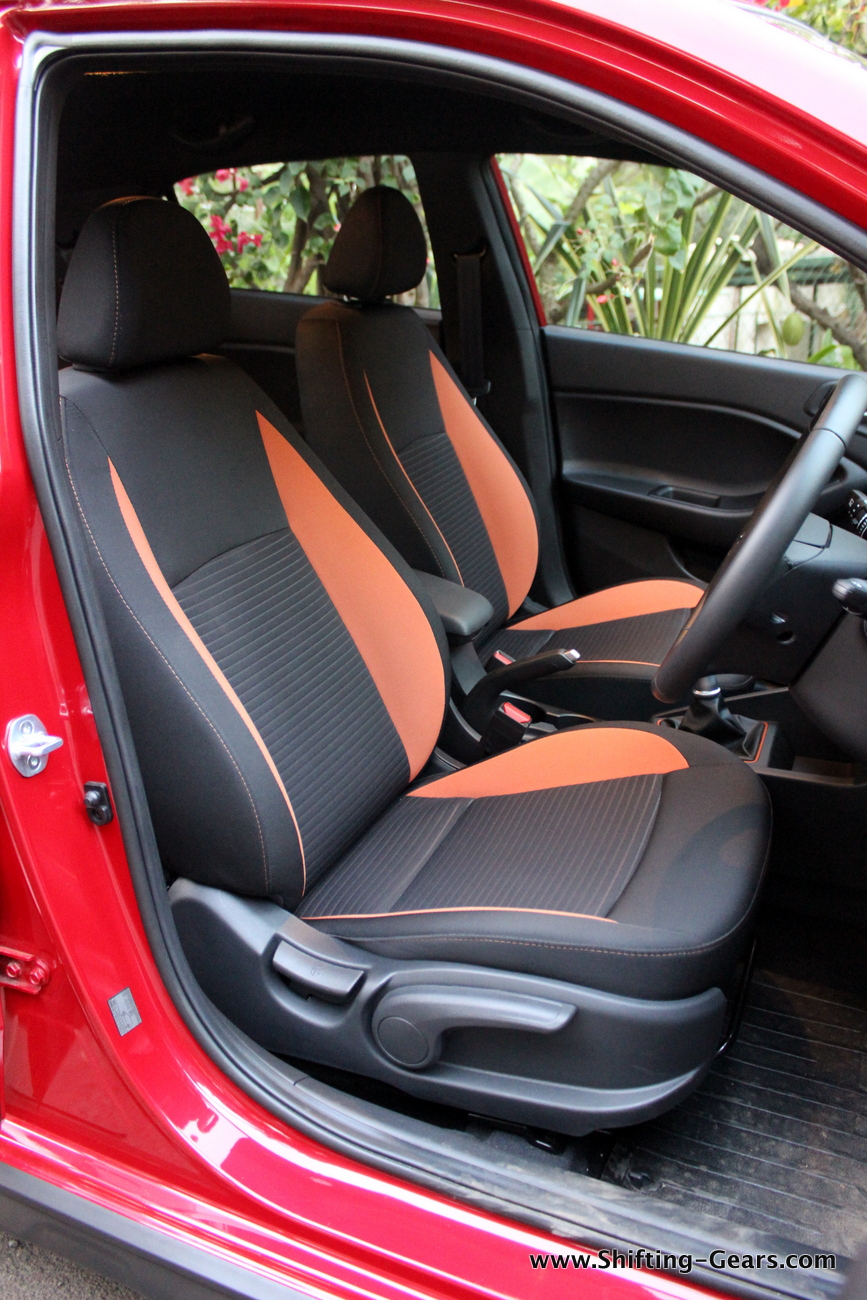 Seat compound is similar to the Elite i20, both at the front and back. Seat upholstery however has been changed. On the orange trim, the seats get orange strips on the lateral support section while on the blue trim, the centre area of the seat upholstery is seen in blue. Seats are comfortable and offer decent support. Seat compound is also decent and will keep occupants happy when on long drives. Legroom availability is good by hatchback standards, as was the case with the Elite i20.

Rear AC vents are carried over and help keeping the ambient temperature cool at the back. AC performance is good, and on a hot sunny day in Goa, we were very comfortable inside the cabin. Stereo performance is also good, and seldom would anyone need to upgrade to a better ICE setup.

So without changing much on the inside, the i20 Active with some fresher colours is sure to wow customers who are bored of the typical beige & black. Those looking for a sporty interior will surely like the orange + black combo. 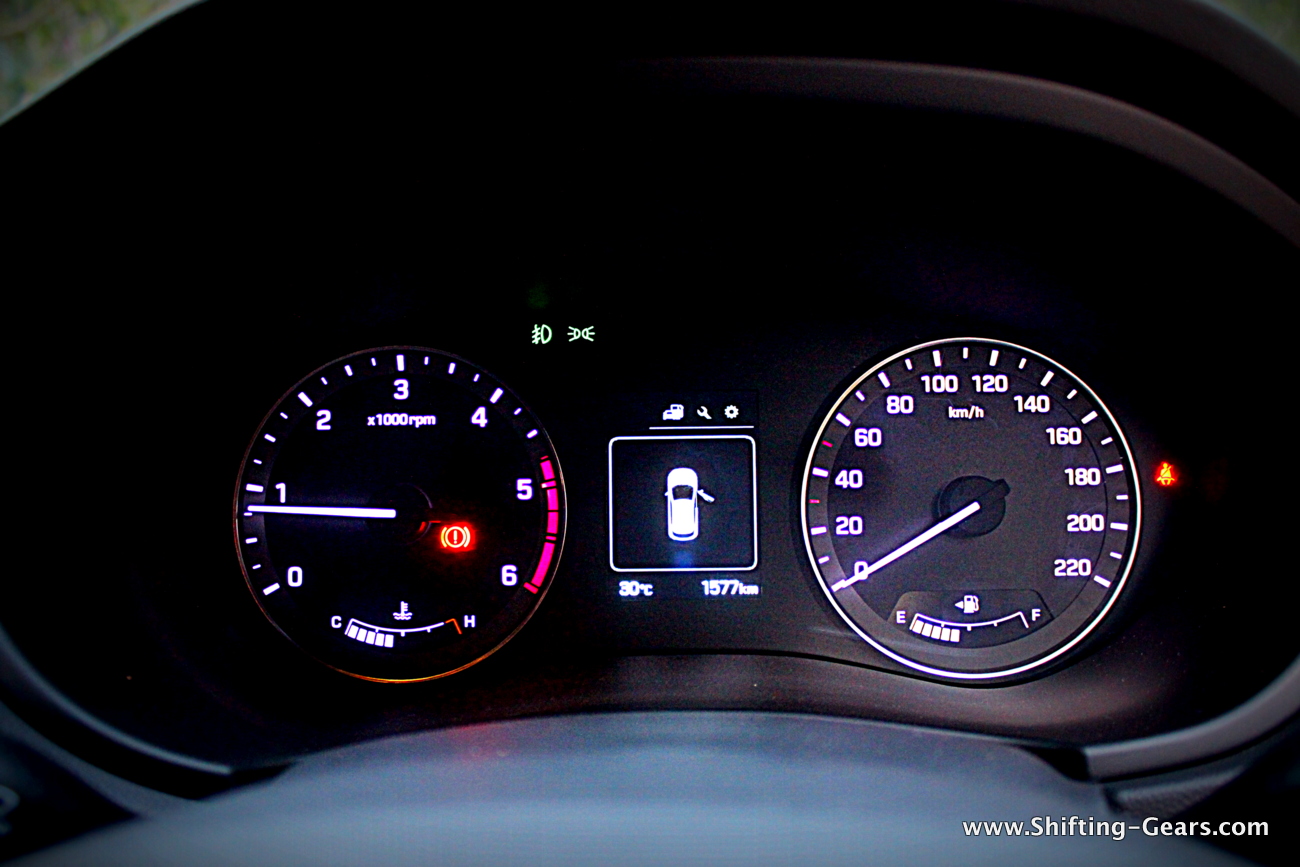 Both engines of the i20 Active are revv happy. The diesel however will be the more popular one with better pep to lug around within the city. In-gear acceleration and the enhancement which Hyundai claims is noticeable on the diesel model, while the petrol feels almost the same. The diesel crawls from 0 kmph in second gear with minimum slipping of the clutch. The final drive ratio on the i20 Active is shorter. Not that too many would notice, but one can feel the difference while cruising on the highways.

Gearbox on both the models is slick, and slots in perfectly in every gear. Gear gates a well defined, and short throw. Clutch lever is light, both on the petrol & diesel and will make things easy during stop & go traffic situations. This coupled with a light steering wheel will make the i20 Active an easy city car, while posing like an off-roader. 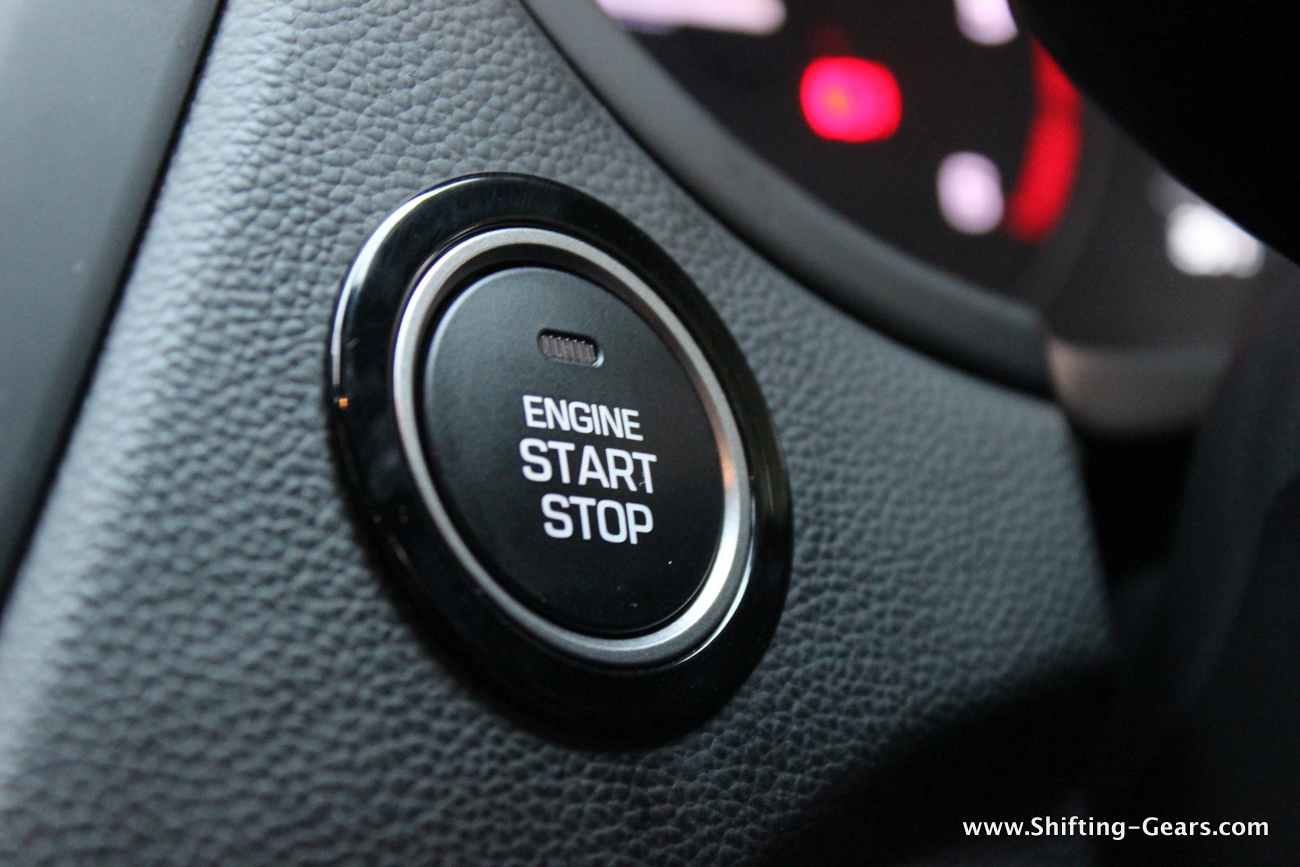 The i20 Active riders 20mm higher than the Elite i20, with a ground clearance rated at 190mm. One might expect a noticeable amount of body roll with this, but Hyundai has tweaked the suspension well. Body roll is well contained. The increased ground clearance has made the i20 more capable of tackling rough roads without compromising much on the driving dynamics. Not that it was the best handler in the segment, but is at par with the regular hatchback sibling. Suspension feels stable even at high speeds and the vertical movement is limited. We sat in a pre-facelift Hyundai Verna for a while and were comparatively more at ease when in the i20 Active. Ride quality also feels a bit plush compared to the Elite i20, but the difference is bare minimum.

If only the steering wheel weighed up a bit more, the fun factor on the i20 Active would have been on the higher side. Braking performance is good, and the car stops in a straight line. Even with the increased ride height, there is no noticeable nose dive during panic braking, it is almost the same like the Elite i20.

Should you dump the Elite i20 and buy the i20 Active instead? Well, if you want something less common on the streets, the crossover makeover is a welcome change. Yes, it is not meant to glide over broken roads, but it can pose better in your parking lot. Not to forget, the i20 Active is an eyeball magnet and if you love the attention at a red light, this might be the one for you. The car continues with all the positives from the Elite i20 and offers more ruggedness. Interiors are also sporty and the ones who want something new will surely appreciate it. How we wish Hyundai pulled off something like the Fiat’s off-road gauges in the i20 Active. Also, we are glad that there is no spare wheel on the tailgate, it would have been a bit too much, and attracted more taxes. So if you want a hatchback which can pose well, and look a bit tough, the Hyundai i20 Active can tick most of your boxes.

Click here to check out the Hyundai i20 Active photo gallery.