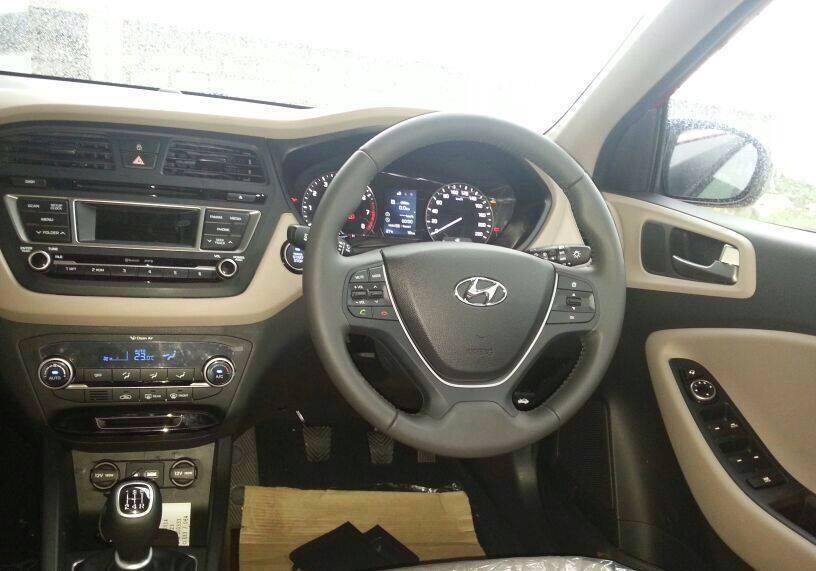 With the launch date inching closer, and production spec cars reaching dealerships and other accessible locations, it is getting difficult for Hyundai to keep the upcoming Elite i20 under wraps. We showed you the exterior pictures a couple of days back, and also shared that the bookings for the car have now begun; today, the an interior picture doing the rounds on social media has revealed the dashboard of the new i20.

Images show that the interiors are going to be available in dual tone, black and beige interior theme. The top part of the dashboard is in beige and the lower section all the way to the floor is in black, with beige inserts below the head unit as well. The steering wheel design is identical to the Grand i10 and the Xcent. It gets a chrome strip around the horn pad and the steering mounted buttons have been changed. Instrument cluster is backlit in white, with white needles. A blue backlit MID sits between the tachometer and speedometer. Start-stop button is placed to the left hand side of the instrument cluster. Centre console has been completely redesigned. Head unit gets a small display screen with a host of buttons placed around it. AC vents are also different from the current i20, and are smaller in height. The car also gets automatic climate control. Gear know also seems to have been carried over from the Grand i10 and Xcent. Placed below the climate control are two charging sockets with the USB and Aux-in port in between. A dead pedal is also seen in the image. Door opening lever is painted in silver too. With the equipment seen here, we assume that this is the top of the line Asta variant.

More details should surface on 11th August when the car is launched.