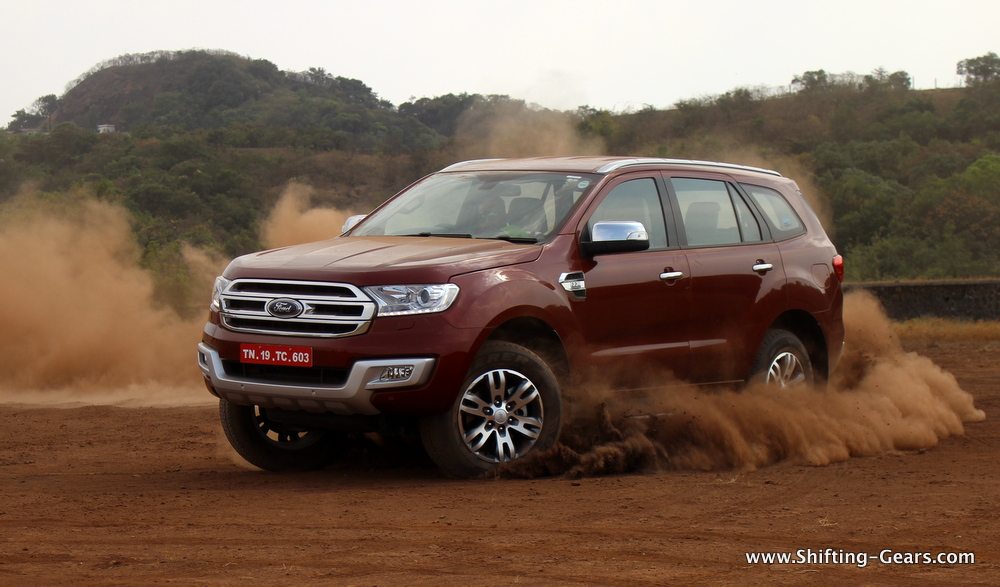 The American car-maker, Ford, launched the Endeavour 10 years ago in India. Ever since this car has a pretty big fan following. Firstly it was big, imposing and had terrific ground clearance. The car was pretty rough looking and later lost its market to the mighty Toyota Fortuner.

But here they are again with the all new model and they sure have hit the right note with this one. To start with, the car looks really good. It had the appeal of a true American SUV. It’s really large and it does give you the feel of vehicle on steroids. The front looks inspired from the Aston Martin family range. This is evident in that fender which has a chrome plaque on it. It proudly spells 6 speeds since all the variants are mated to a six speed box in this car. 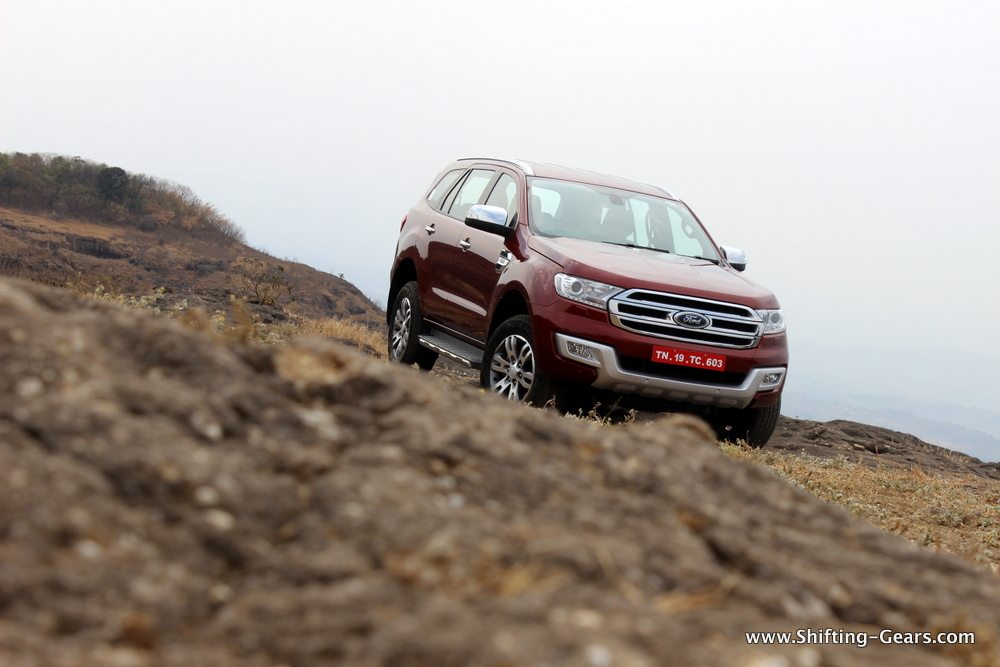 We didn’t test the manual but the automatic gearbox in this car is the 6R80 which is used by Ford in their F-Series pickup truck and the F 150 being their largest selling model in the United States.  So could all these new features match the punch that thus muscular car appeals? We tested this beast in Bombay to find out.

Exterior:
This is a huge car and this fact is definitely noticeable. The Fortuner looks small in front of this car and this is typically because of the bulk and flared chrome grill which elaborates the Endeavour’s design philosophy. The headlights are a daytime running LED’s with projectors. The whole front end has a muscular charm like older SUV’s which makes it a clear winner from its rivals.

The windshield is raked due to counter the aerodynamic loss which occurs due to the square shaped jaw line. Chrome is everywhere in abundance from the trims to the handlebars to the OVRM’s. The side gets the 2.2 6 Auto also marked in a chrome fontage. 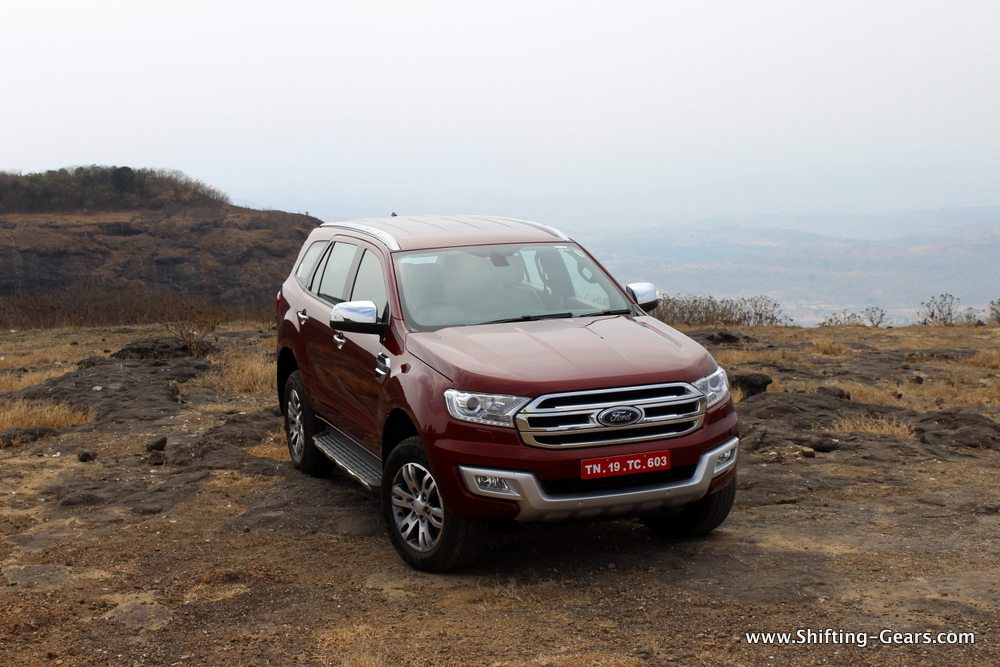 The side footboard is rubber padded and is necessary to help the not so tall masses to get inside its lofty cabin. The cabin is lined with a black shade and the roof has silver shaded rails. There is a waistline which runs along the front end of the car from the grill to the rear doors. Similarly the side doors have a trim line which follows all the way from the lower half of the door to the rear end.

The wheels are 18 inches and have black highlights with those solid discs very visible from the 6×2 alloys. The rear end gets a spoiler which enhances the muscle profile and the taillights are large and organically crafted which add on to its look.

I personally think the Endeavour truly fits the description of unmistakably masculine and powerful vehicle. 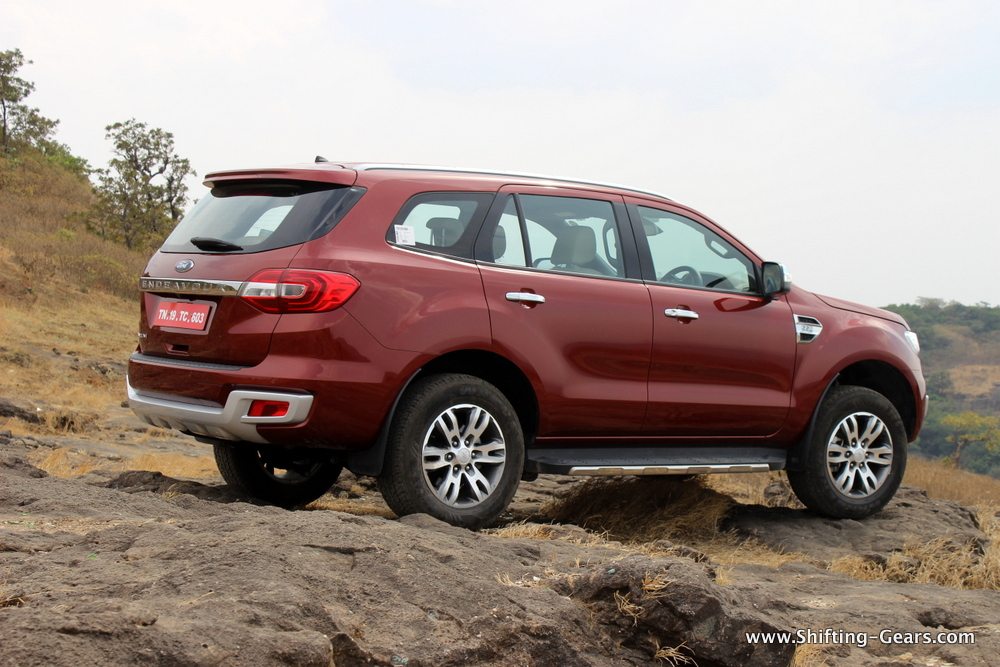 Interiors:
As impressive as the exterior of this car is, the interiors will have you totally zapped! The Endeavour gets a new premium dashboard which is coloured in brown-beige with a shiny grey trim. The upper part of the dashboard and the seats are hoisted with premium leather.

The rest of the dashboard is beige and has a firm feel to it despite it being of plastic. The quality of this cabin is really satisfactory and you would not be able to find a fault with this one.

The new instrument console is truly modern and has an analog speedometer with TFT multi info displays on its either side. These screens could be configured using the buttons on the steering wheel.

The left side screen is connected to the vehicles SYNC infotainment system while the right deals with fuel economy, tyre pressure monitoring, trip computer, digital tachometer (in S mode), etc. These electronics really make the car worth what they are pricing it as.

The vehicle is really high and hence the side footboard is really helpful. The designers have strategically placed a grab bar in the front A pillar which really helps in getting into this car. The driver seat is 6 way adjustable and has a high seating position.

This posture is does give the driver a good all round visibility but the sheer size of this car yet gives it certain blind spots which does make manoeuvring this beast in city traffic a bit challenging. The rear seats three but the air conditioning vent and the high transmission tunnel make the central person seating a little uncomfortable. However you could slide this seat back and sit much better but a thigh support is lacking and that would have done the trick.

The third row could be accessed by folding the seats on the right side of the second row. Getting in here is a little task and like most modern day seven skater, your position of sitting is determined on how the person in front of you is.

I personally think that the lack of thigh support does make you sit in a upright knee raised position which makes it a stress in long drives. But the third row occupants due get AC vents, cup holders and also a 12V charging socket

All being said, this car could properly fit in as a 7-seater and it sure does have the interiors and electronics to keep it at par to its modern day rivals. 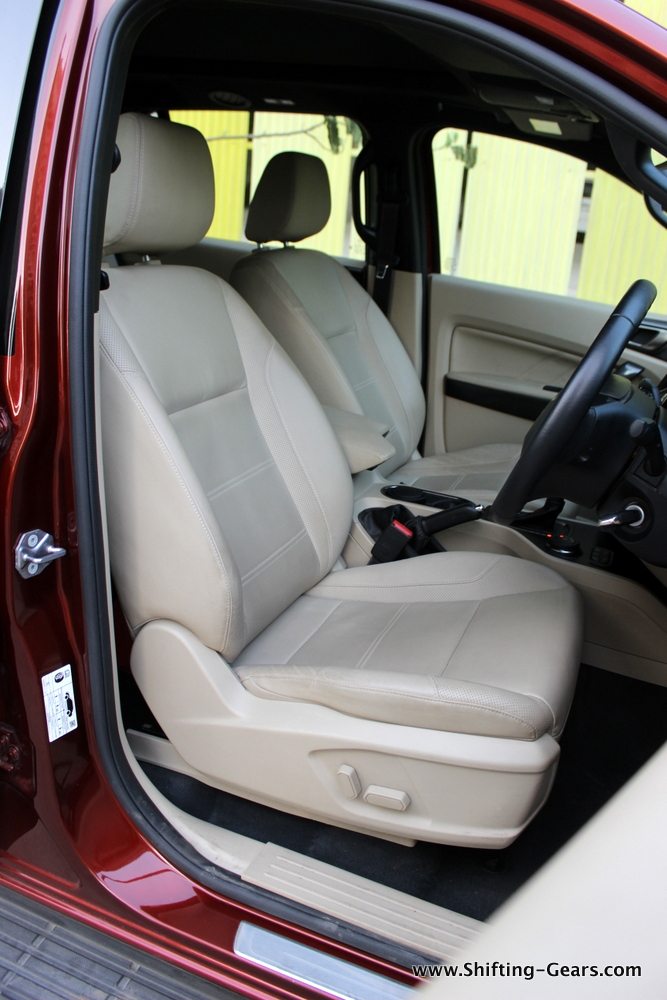 The 6-speed auto transmission could be a whole lot better. It has really smooth upshifts and downshifts when driven normally but there is a transmission loss when you accelerate it suddenly. The gearbox box drops a gear and revs high but the immediate action of this progress comes a few moments later. I felt like I was driving a CVT!

This essentially spoils the fun of flooring the throttle as you cannot really have that feel owing to this lag. Ford could deal with this problem by introducing a dual clutch but that would raise the price of this car. 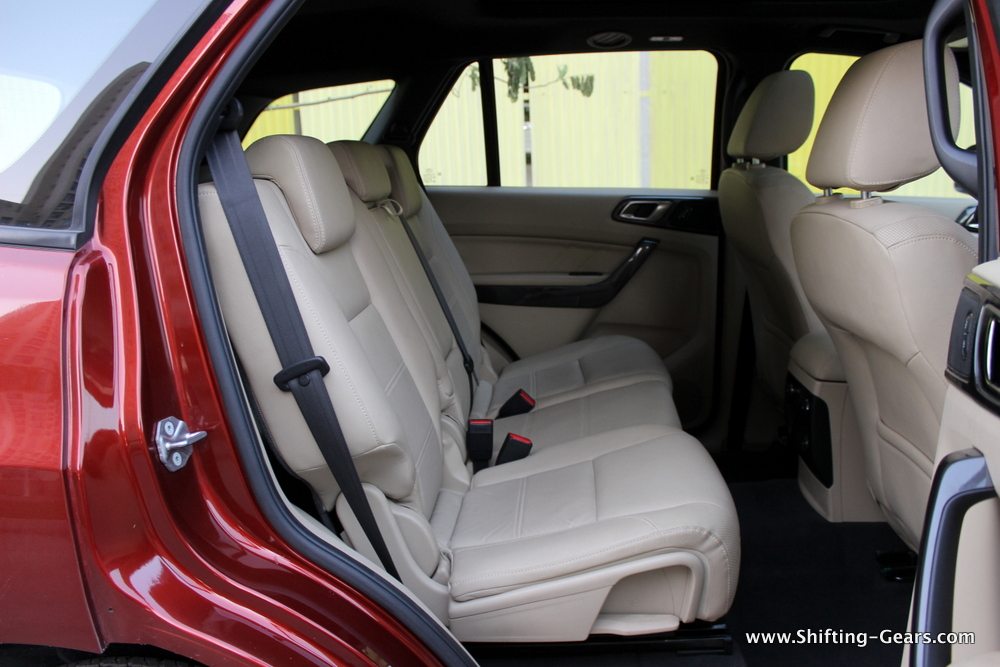 Driving around in the 3.2L Endeavour sweetens the whole deal. A big macho looking SUV complemented with a nice and punchy oil burner. It even sounds good, with a throaty growl. It is noticeably louder than the 2.2L motor, and there is a fair amount of cabin noise in comparison, but not the type you would complain about. This engine also gets exhaust gas recirculation system.

In-city driveability of the 3.2L motor is even better with ample power and torque available instantly when you tap the pedal. Once on the move, the throttle response is nice and sharp. Unlike the 2.2L, the 3.2L variant doesn’t run out of breath. This particular variant is an all-rounder for city as well as highway mile munching. It pulls very close to the double ton, with a nice growl which is enjoyable. For those who wish to take things in their hands, there is a manual tiptronic mode, and for those who just want a little sharper feedback, switch to the ‘S’ mode.

The car has an interesting technology called Active Noise Cancellation.  This enables to keep the cabin really quiet. It is felt when you are driving at low revs and the AC is at the lowest setting and yet you would not be able to hear that engine noise. It filters it out pretty well.

This system works with its own electronic brain. There are speakers and microphones strategically located which measure the amount of sound output from the engine and creative the exact opposite resonating waves to counter it. The tire and wind noises are kept out too. 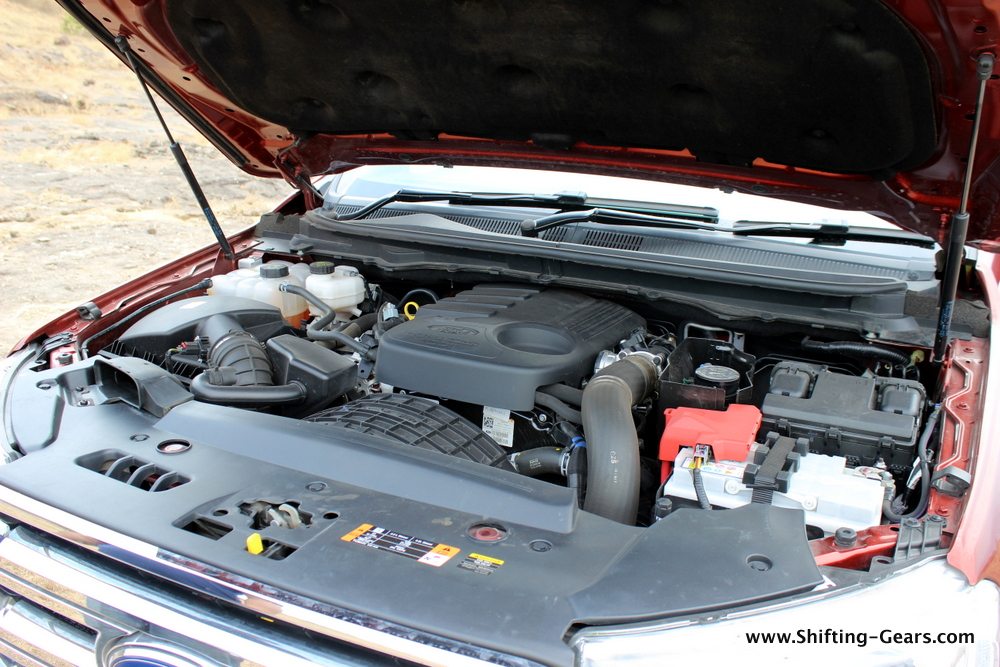 The system involves its own electronic brain, strategically located microphones and speakers. It measures the engine noise and neutralizes it by creating equivalent and opposite sound waves. You will have to experience the system first hand to fully appreciate its sheer brilliance. Tyre and wind noises are kept out too. You have to experience this system of the car to see how good it is.

In my opinion, the Active Noise Cancellation system this car right in the leagues of much more expensive luxury SUVs when it comes to cabin experience. I think this is where Ford has won with this car. Its extraordinary ride quality. The car has a superior handling capability and the comfort levels are unmatched when compared with its rivals. 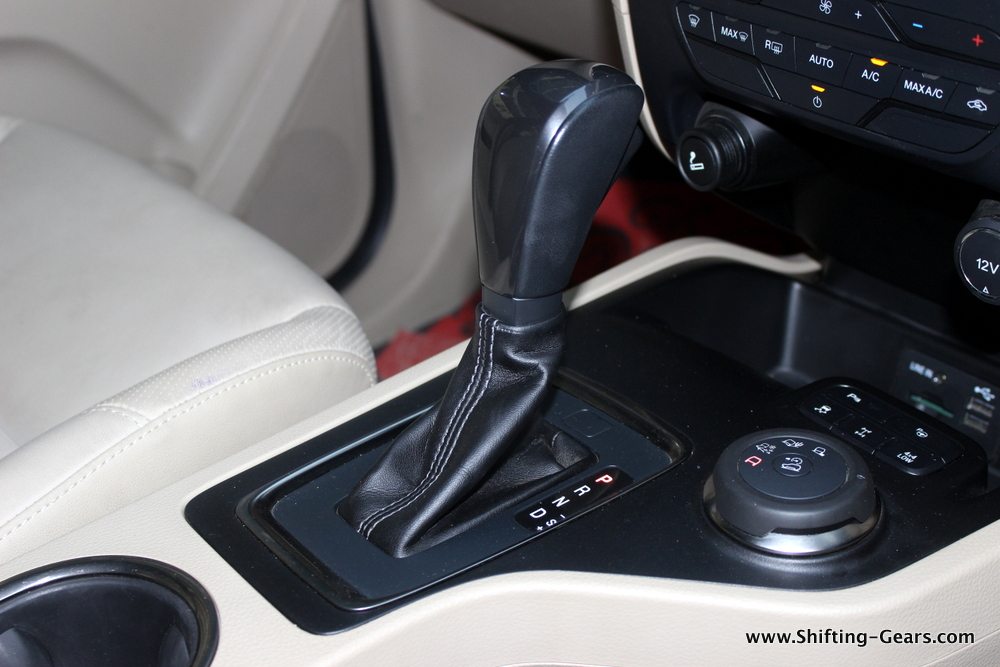 The front setup has coil springs which are independent in the front and have anti-roll bars in the rear. The suspension is soft which is why this car feels like the way it does. The steering is light and it handles this mammoth pretty confidently on the roads.

Sharp manoeuvres, when required can be handled with confidence and the Endeavour doesn’t have that unstable jitteriness the vehicles its size generally suffers. We tested this car on the way to Amby Valley and oh boy! This thing has some real serious damping and control. Not once did we feel that we may lose the traction in this vehicle no matter how hard we pushed it.

This is owed to the additional electronic safety net of traction control and Electronic Stability Program to cover up for a stupid driver’s deeds. It also gets Hill Launch Assist to prevent it from rolling back on steep inclines. Hill descent control is available too, but not on this specific variant. 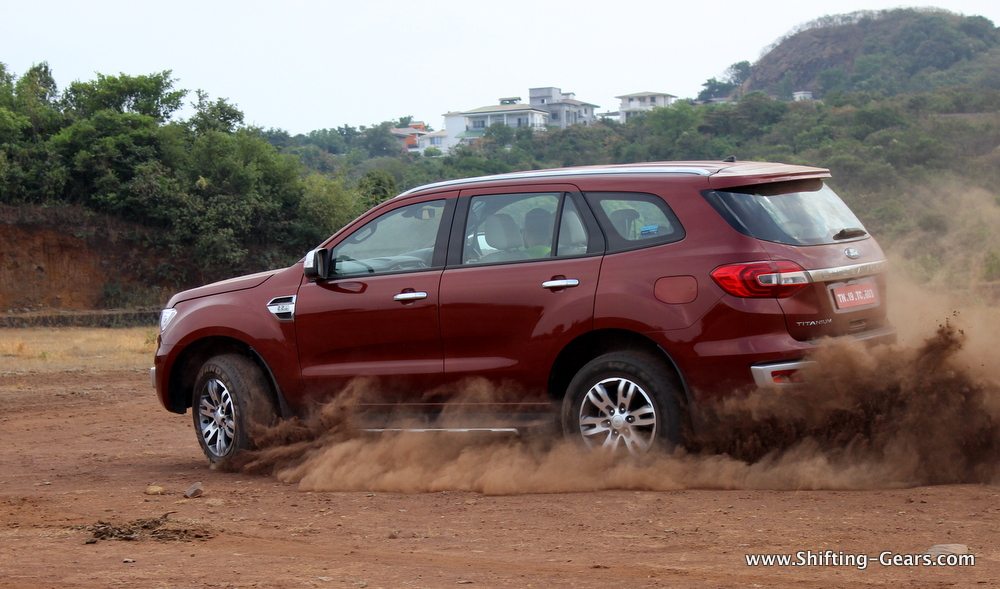 The 2.2 AT gets a rear view camera, rain sensing wipers, electro chromic auto dimming inner EVMs and heated ORVMs along with a tyre pressure monitoring system. The automatic self-levelling headlights which are HID provide brilliant illumination on the road. This works well even in the rains when those huge tires throw dirt on the headlights. It also gets a cruise control and an adjustable speed limiter.

I think Ford has generously given a good amount of driver aids and active safety measurements in this car. 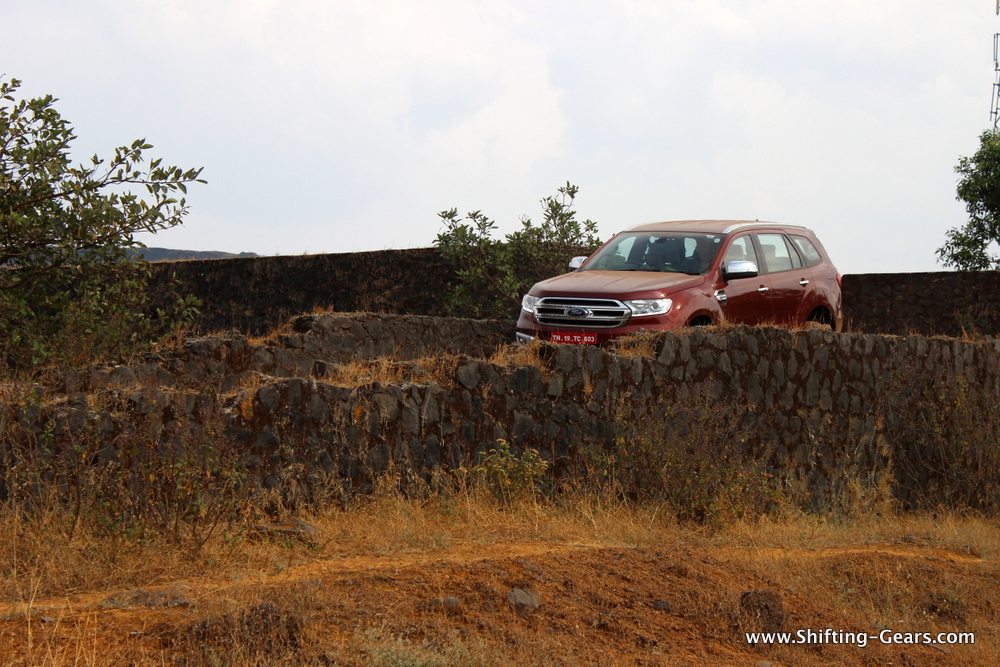 I think what Ford have done here is the creation of a very refined and highly capable SUV. I would prefer this car any day to the Toyota Fortuner who is priced pretty much in the same bracket but does not pack half the features as when compared to this.

It surely attracts looks of awe owing to that size and impresses the occupants with a spacious, plush and quiet interior cabin. The ride is exceptionally good and the features are enough to definitely keep a tech savvy person engaged. The 6-speed auto takes a bit of getting used to but the 2.2-litre engine emerges as a terrific puncher. We can only imagine what the 200 PS 3.2-litre inline 5-cylinders are capable of!

This is an all-new improved Endeavour in terms of comparison to its previous generations. Ford will have to ensure that it’s after sales quality is on par with its product quality, but that’s a process that takes time. The company is working hard to rebuild their image and if they manage to do that, they all certainly have a true successful product on their hands.

Click here to check out the Ford Endeavour photo gallery.