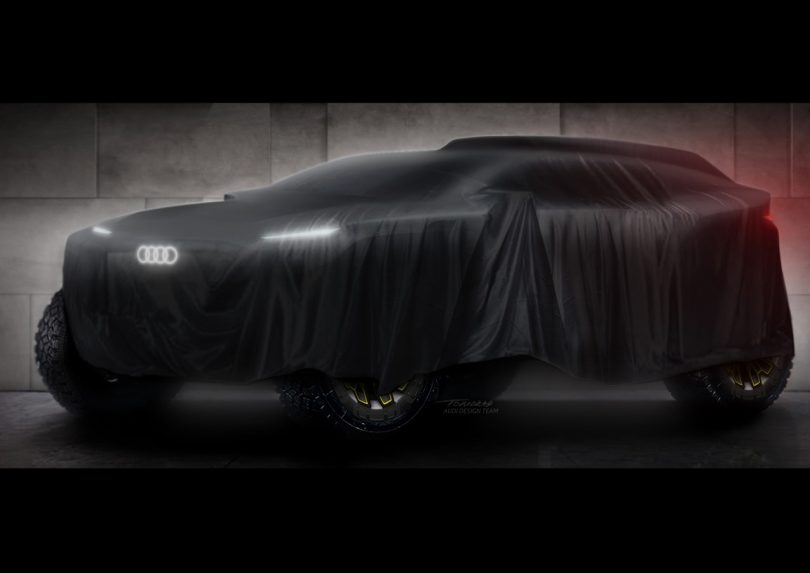 Audi looks to set its commitment in the motorsport world by involving itself in the Dakar Rally, which is known to be one of the greatest challenges in motorsport. This time around, an alternative drive concept is used which is a combination of an electric drivetrain and a high-voltage battery coupled with a highly efficient energy converter. The high voltage battery can be charged as and when required while driving, by an electric converter with the help of a potent TFSI engine. The key learning point of Audi is to develop the electric drivetrain and battery keeping in mind the production of passenger electric vehicles for the future, which are the next big thing in the automotive world.

The teaser image reveals a very bold looking SUV with LED DRLs around the bonnet shut line, illuminated Audi rings on the grille section, LED tail lamps, prominent wheel arches and shoulder line / waist line, off-road tyres and alloy wheels with neon accents. Point to note, this is just a concept rendering and not the final car which will be jumping around at the 2022 Dakar rally.

Audi has had its share of success in past in the field of motorsport. From 1981, the Audi’s in-house developed Quattro technology was the spearhead in rallying. This helped Audi in integrating the Quattro technology in its passenger SUVs and in the electric e-tron models as well. Also, the win in the 2012 Le Mans 24 Hours, the world’s most enduring motorsport event proved that Audi is still in the business. Also, with this announcement, Audi has revealed that after 2021 Audi won’t be a factory team at Formula E; but newly developed powertrains will be used by customer teams beyond 2021.

The story of Audi in Formula E is quite impressive. Starting off with a supporting role with its longstanding partner ABT Sportsline and then having a full factory involvement since 2017. Right now, the Audi Sport ABT Schaeffler team is the most successful team in the history of Formula E. As for the records are concerned, they have a total of 43 podium finishes which includes twelve victories.

The drivers’ title in 2017 and teams’ title in 2018 were the key high points of their time in the Formula E. With this, Audi has developed and built a good electric mobility infrastructure which can be proved by seeing the sales figures of the Audi E-Tron. By 2025, it is expected that the electric and hybrid vehicles will account to about 40% sales of the passenger vehicles for the German brand.