It is no secret that Tata Motors is working on a Turbocharged Petrol variant of the brand’s premium hatchback offering the Altroz. The turbo-petrol test mule of the car was a few months ago spotted sans camouflage sporting a “TURBO” badge on the tailgate and a new shade of Blue. Now, a specification sheet of the turbo-petrol model has leaked on the internet leading us to believe that Tata could be in the process of homologating the new Altroz and is likely to launch it soon, possibly even during the upcoming festive season.

According to the leaked specs sheet, the new Tata Altroz will be offered in two petrol engine variants – a naturally-aspirated 1.2-litre three-cylinder engine that is currently on offer and a new turbocharged 1.2-litre three-cylinder motor. The new turbo-petrol motor is also said to produce 110 PS of power and 140 Nm of torque. To put things into perspective, the current 1.2-litre naturally-aspirated three-pot unit makes 86 PS of power and 113 Nm of torque.

While it is not mentioned in the leaked document, the turbo-petrol engine is also speculated to come with the 5-speed manual transmission (TA65) along with a new Dual-Clutch Automatic Transmission (DCT) as the document does mention “Overdrive”, leading us to believe that some sort of automatic transmission with an overdrive gear to improve efficiency and smooth highway cruising is likely to be on offer.

Other than the new Tectonic Blue shade that is available on the Tata Tiago and the Turbo badge on the tailgate there is no other differentiator and the car carries over all the design and styling highlights from the standard. Of course, more details on this is still awaited as earlier spy pictures have only revealed the car partially. Tata is expected to make subtle changes and add some colour accents on the exterior and offer mild changes on the interiors such as Turbo specific upholstery and embellishment to distinguish it from the standard.

The Tata Altroz, when equipped with the turbo-petrol engine, will directly compete with the Volkswagen Polo powered by the 1.0 TSI (Turbocharged Stratified Injection) engine. It will also contend with other premium hatchbacks such as the Hyundai Elite i20, Maruti Suzuki Baleno, Toyota Glanza and the new BS6 Honda Jazz. 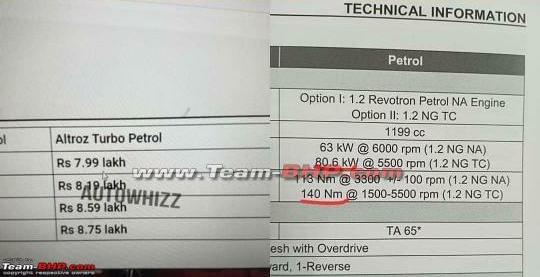