Pictures released by Team-BHP.com suggest that Toyota has started testing the next generation Toyota Innova in India.

It was reported earlier that the current generation Innova, and the facelift that it got, would be the final update to the existing MUV. And that a newer model will replace it soon. The car has now been spotted testing near Bangalore along with the current model on sale. The current generation Toyota Innova was launched in 2005 and has had a long and successful 9 year product life cycle till date, with some minor facelifts.

From the front end, the new Innova seems to have a raised body structure as compared to the current generation. The front grille section is almost flat and poses more like an SUV rather than a MUV. It is boxier than the current sloping front end. Headlamps seem to have received a swept-back styling.

Front and rear doors however resemble to the current Innova on sale. But if you look at the third row quarter glass, the design here has changed which tapers to the top and not towards the bottom. From the angle of the image taken, ground clearance also seems to be on the ample side. The car was spotted wearing a shark-fin antenna and a new alloy wheel design. New tail lamps are also in place, which are relatively smaller in size compared to the current Innova. Also, the rear wiper has been replaced with a better looking unit.

About time that Toyota replaced the old Innova, to maintain the segment domination. 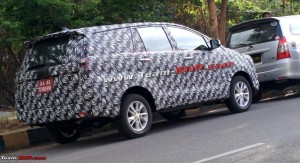