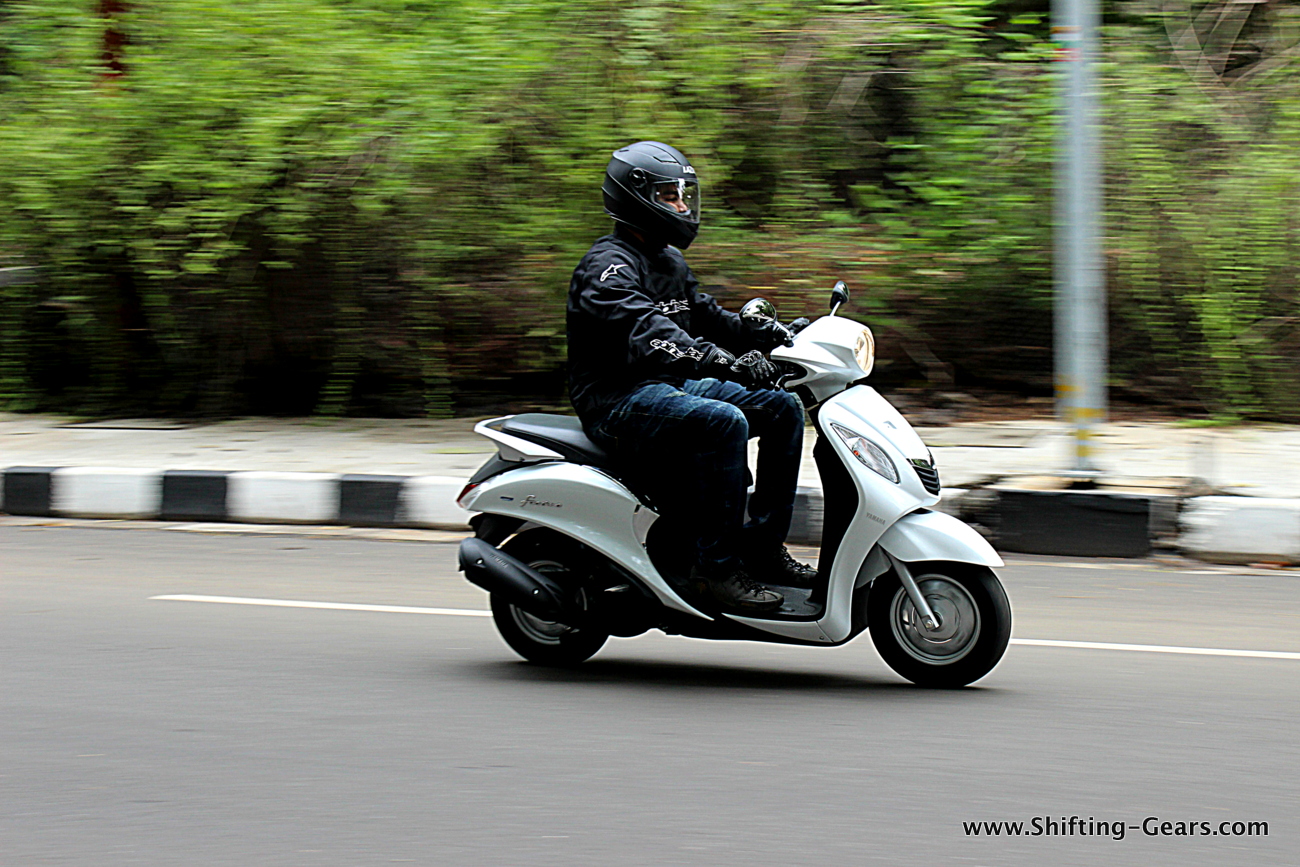 With the scooter segment growing way better than the motorcycle segment, almost every manufacturer is cashing in on it. Yamaha known for its performance oriented motorcycles also took a step towards this non-gear category and has been focusing on the volumes game by introducing new products in the scooter segment. As of now, Yamaha has 4 scooters in its portfolio which includes the Ray, Ray Z, Alpha & the latest Fascino. 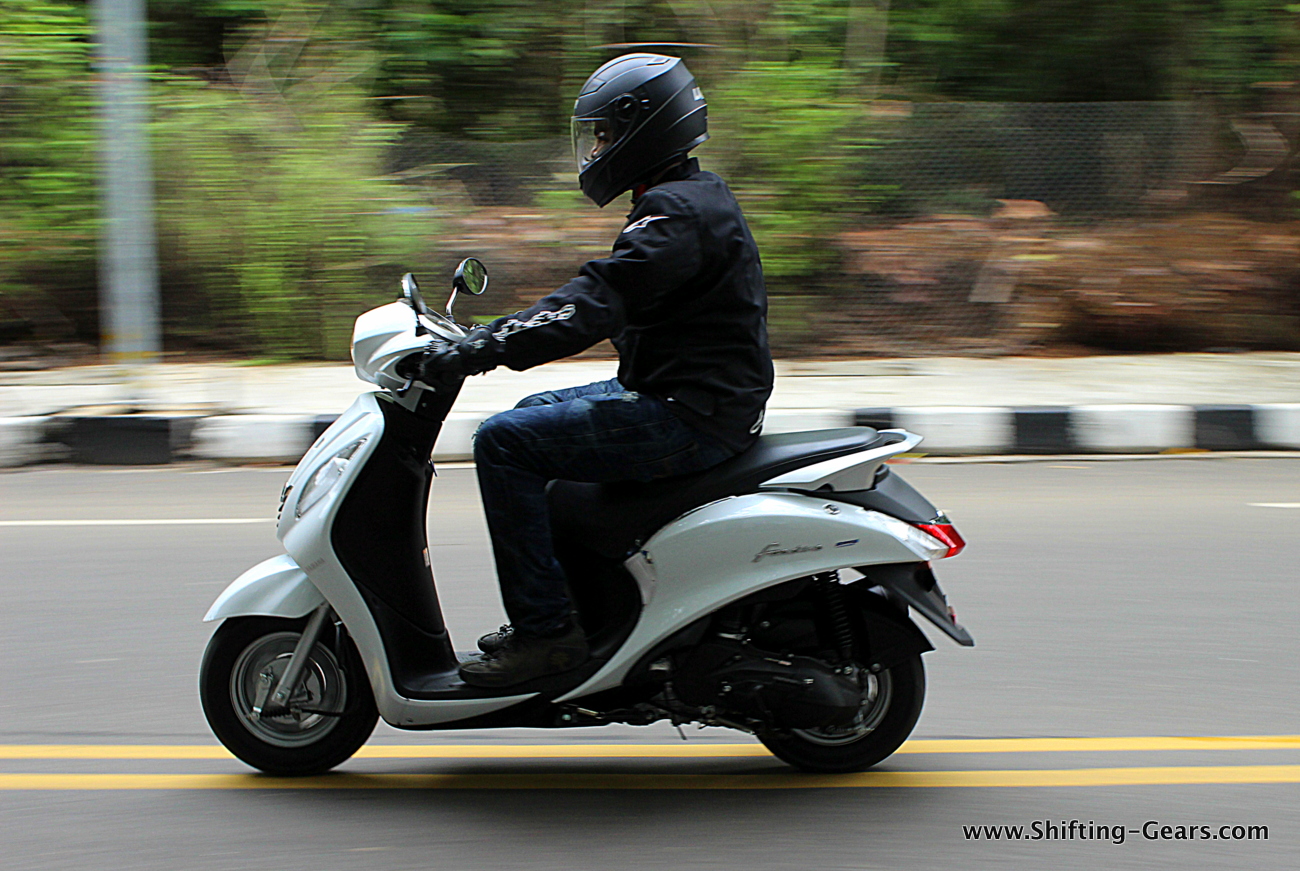 While there’s little one can do to make a scooter really stand out amongst the crowded space, Yamaha has opted to go the glamorous way. As the name suggests, Yamaha wants the Fascino to attract the fashion conscious buyers, which are increasing day-by-day. The Fascino although a new body shell, shares the mechanicals with other Yamaha scooters, hence, being reasonably priced even after the chrome overdose which could have taken the pricing a couple of thousands higher. But does the Fascino have enough GO to match the SHOW? Can it actually grab market share from competitors rather than cannibalizing on sales from its own siblings? We took this latest kid on the block for a quick spin around Mumbai to find out.

Styling:
One glance at the Fascino and Yamaha’s strategy for this scooter is clear. The Japanese brand is trying to attract those who are looking for some bling while on the go. While the Piaggio Vespa had all that jazz for the fashion conscious buyers, the Yamaha Fascino with pricing noticeably cheaper is trying to reach out to a similar audience. 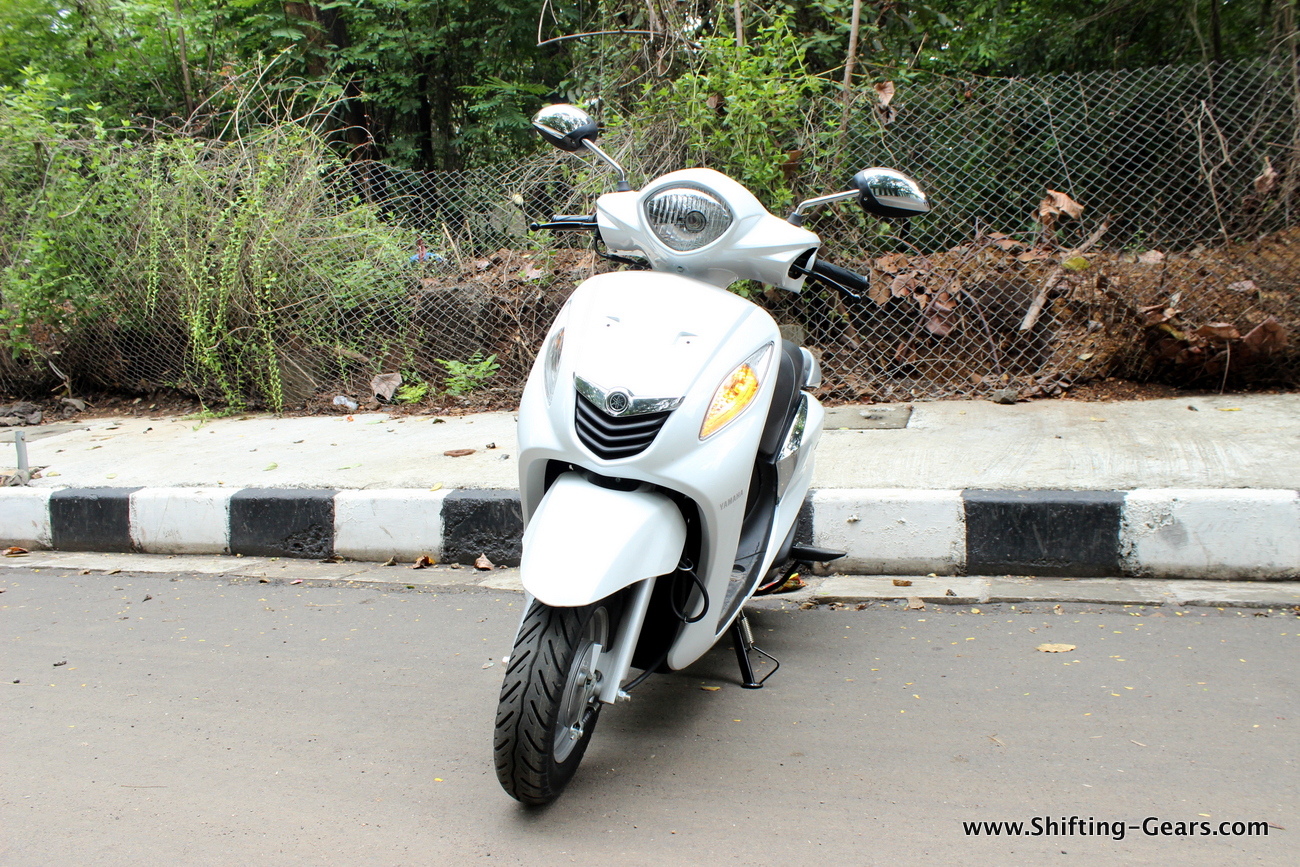 At the front, the most striking design highlight is the pseudo air ducts on the front apron with a chrome garnish on top. This V-shaped chrome accent also houses the Yamaha logo. The body style is very curvaceous and the turn indicators on either side have a leaf-like design. Even the headlamp is styled like a scooter from the 90s, and looks really cool. The fairing around the headlamp is clean and does not try to hard with unnecessary decals or crease lines. The numberplate is to be mounted on the front apron which will hide the spine-like line. Yamaha badging is very subtle with small stickers under the turn indicators. Rear view mirrors also have a leaf-like design and get chrome + black casing. Even the stalk wrapped in chrome. Below, the mudguard is also painted in body colour and the telescopic front fork is painted in silver. Although harping about fashion, Yamaha does not offer alloy wheels on the Fascino. Brakes offered are also the simple drum-type.

Come to the side, and you just cannot miss the curvaceous side panels. There’s also a generous amount of chrome under the rider seat which breaks the monotony and adds to that premium appeal. The Fascino badge is mounted on this panel along with the ‘Blue Core’ badge. A neat design touch is that the side panel & the front panels do not actually meet under the foot well, but maintain some distance; just for aesthetics. The rubberised floow is seen in black, and is typical of scooters. Seat is nice & wide & well contoured for both the rider & pillion. 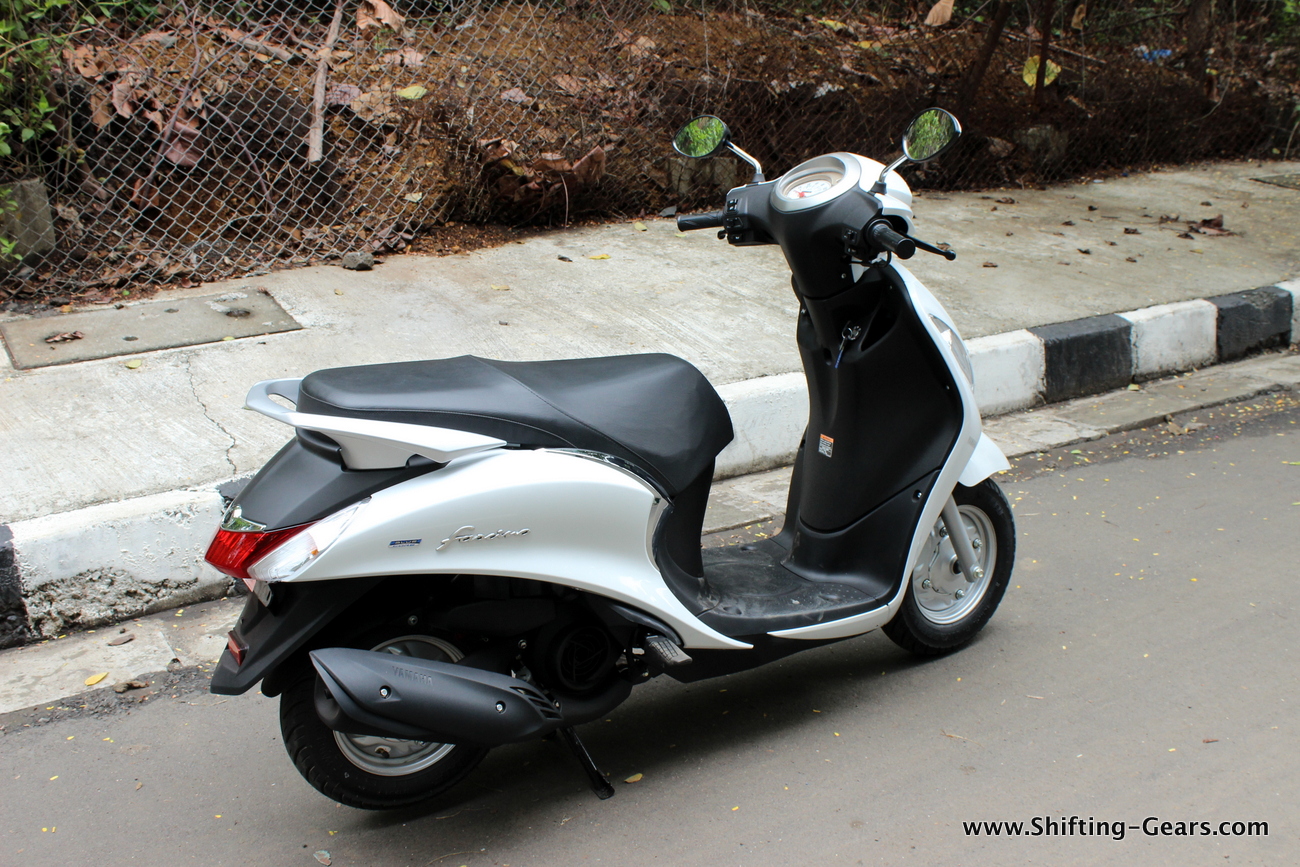 Come to the back, and Yamaha has done a decent job of making the Fascino look a bit different for the segment. However, the styling might not suit everyone’s taste and might be a bit over-the-top for some. Side panels do not wrap all all the way back, and there is a matte black plastic panel under the pillion seat. The tail lamp & this plastic panel is again separated with a chrome ornament with the Yamaha logo placed within. Turn indicators are stacked vertically next to the tail lamp. The pillion grab rail painted in silver is nice & chunky. Exhaust pipe is identical to the Aplha sibling, and is merely a cut-copy-paste job, seen in black. The engine mounted to the LHS of the wheel is also painted in black. Rear mud guard houses a small reflector for added visibility at night.

Overall, the Fascino is a decent looking scooter and surely a bit different compared to competition. Generous amount of chrome all around does add to the premium feel, but the curvaceous body might not really appeal to the masses.

Instrumentation & ergonomics:
Instrument cluster on the Fascino gets a silver surround. A small Yamaha logo is placed within the meter console. The speedometer is analogue with white background and orange needles. Fuel gauge on the right is analogue too. Tell tale lamps only include turn indicators & high beam. We wish Yamaha added a digital odometer to the Fascino as a analogue counter now really sticks out as a sore thumb by 2015 standards. But then, competitors are also playing it safe (cheap). 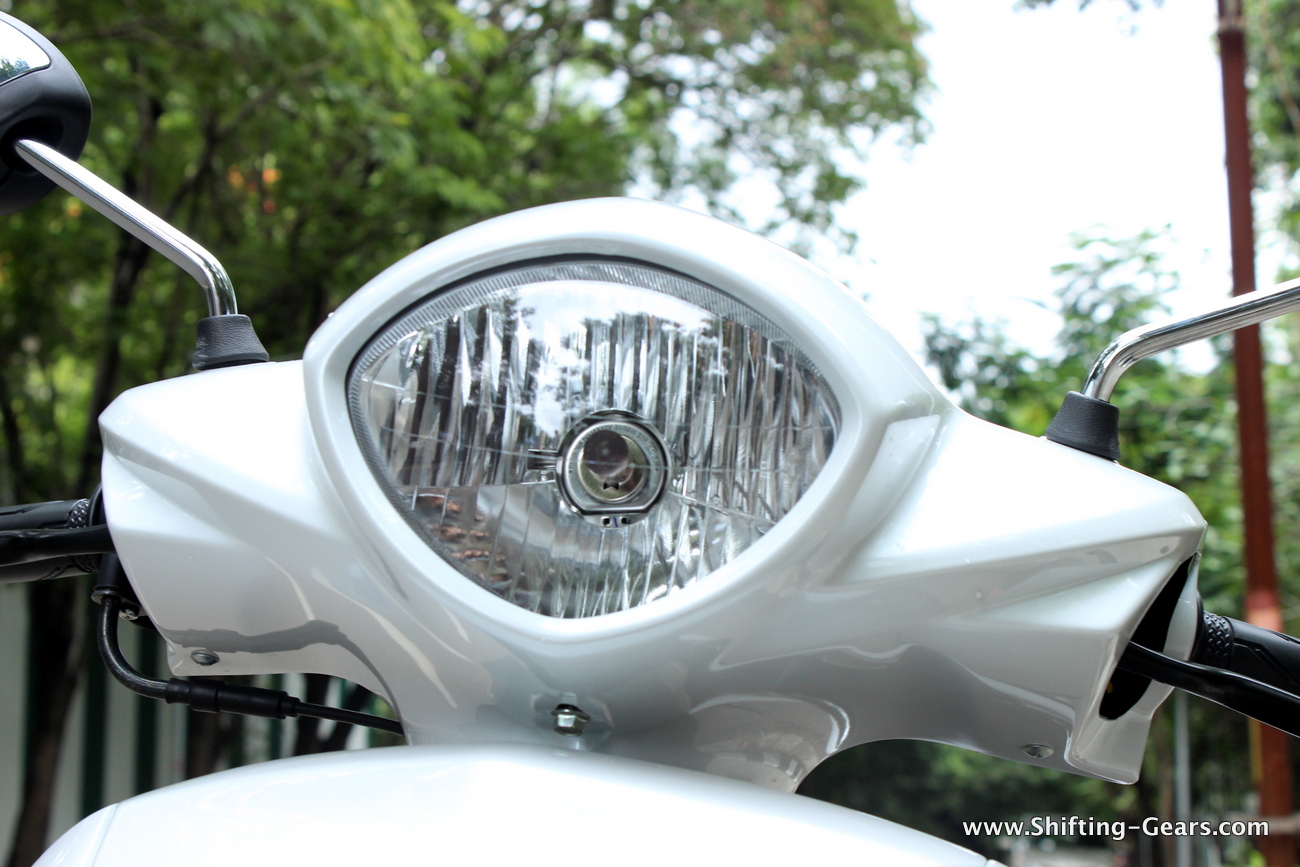 Switch gear is easy to use and plastic quality is acceptable by segment standard. Fit & finish around the handle bar is really good and it does feel like the Fascino will pass the test of time. Rear view mirrors offer very good coverage of what’s happening behind you. The keyhole is conventionally placed under the handlebar, and there is a small cubby hole to store oddities next to it. To the left, you have a choke switch to help you out during cold starts. There is no storage hook provided under the handlebar, but there is one under the rider seat. 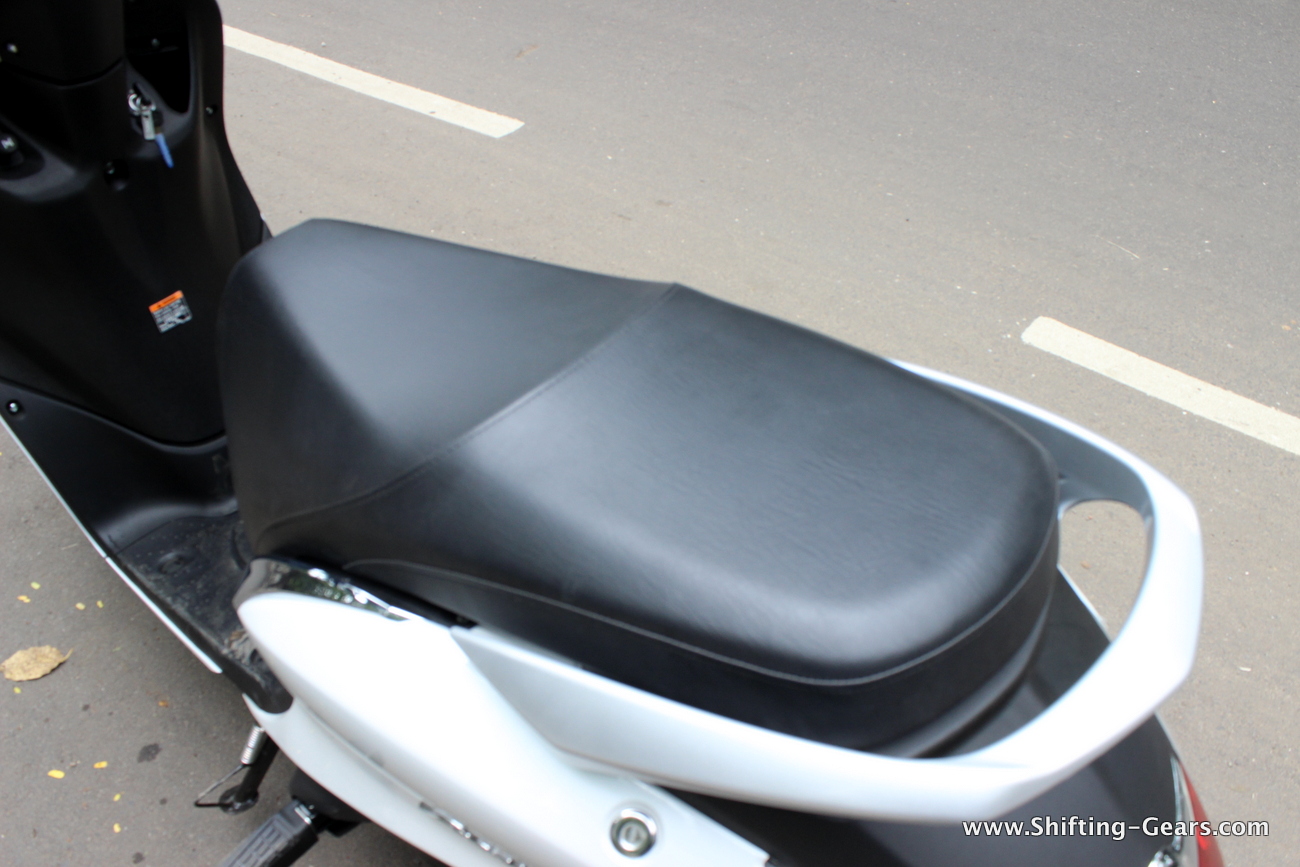 Seating position is typical of scooters, and pretty comfortable. The seats on the Fascino are soft, yet supportive. Seat base is of a decent size to accommodate even those who are on the heavier side. Leg room is available is also acceptable & shorter as well as taller riders will not be complaining in the comfort department. For the pillion, the seat again has more than enough room and the grab rail comes in handy if at all the rider is playing around too much.

Engine, performance & handling:
Powering the Yamaha Fascino is the same 113cc, air-cooled, single-cylinder, 4-stroke, SOHC, 2-valve petrol motor which is plonked in the Ray & Aplha scooters. This motor generates 7.1 PS of power @ 7,500 RPM & 8.1 Nm of torque @ 5,000 RPM matched to a V-belt automatic gearbox. Fuel is fed via a carburetor system and Yamaha claims that the Fascino can deliver up to 66 kmpl. This gives the scooter a claimed riding range over 340 kilometres. 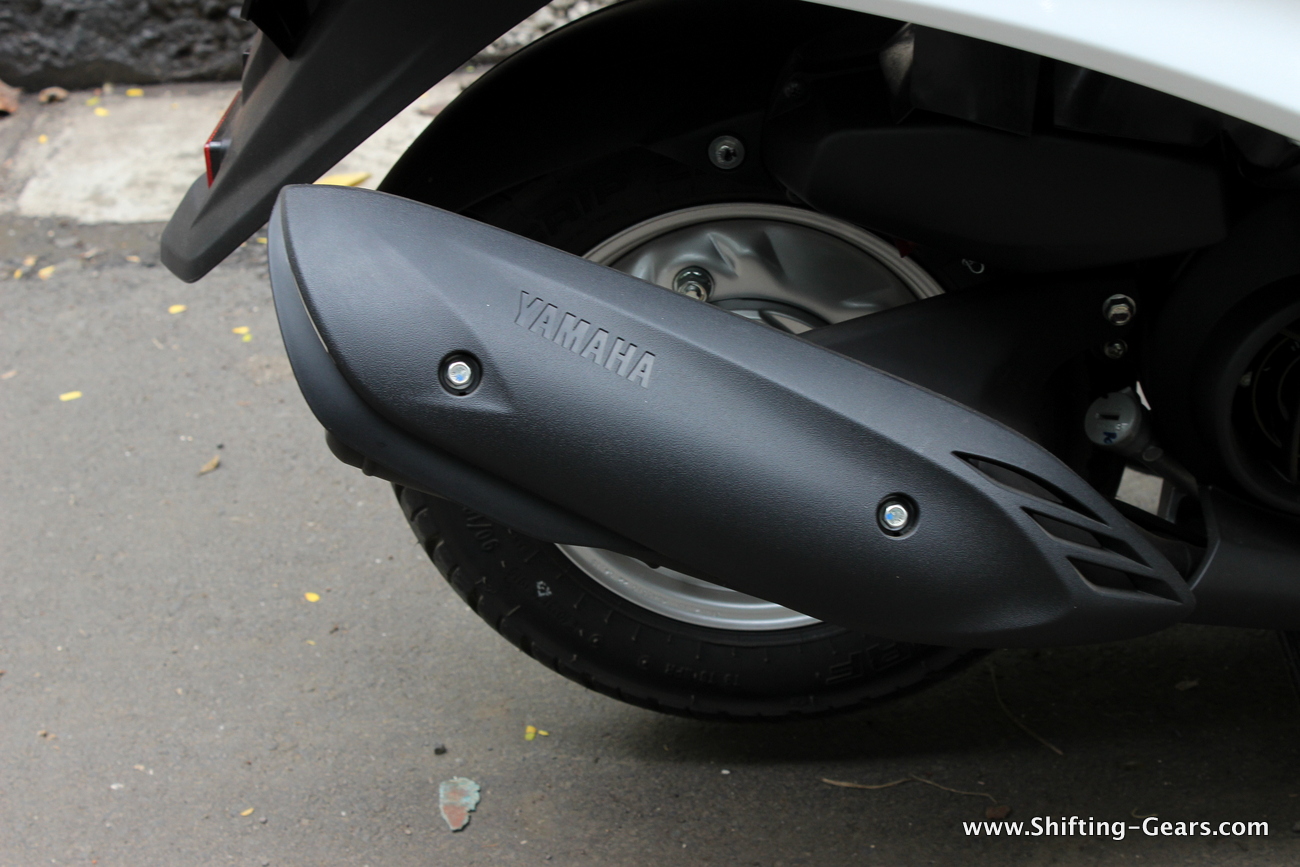 Fire up the Fascino and the scooter starts up without too much drama. Self-starter is quick, and the motor idles with very little / negligible vibrations. Engine NVH is at par with the segment. Exhaust note at idle is also very well muted.

Wring the throttle and the brisk performance will keep riders happy. Starting off from a signal won’t keep you caught in the typical CVT rubber band effect but rather help you make swift progress. We mentioned this before, that this motor from Yamaha is quite peppy and the throttle response feels very crisp. Low & mid range performance of the Fascino is very well suited for city riding. There’s ample torque available to continue the momentum. There’s no dull area in this engine and the scooter can revv all the way up to the top speed from a standstill. While doing so, the Fascino not only feels refined, but also reliable.

Highway performance however feels a bit strained, as is the case with many other 110cc class scooters. Beyond 90 – 95 kmph on the speedo, progress tapers down. High speed stability thanks to the telescopic front fork is decent. 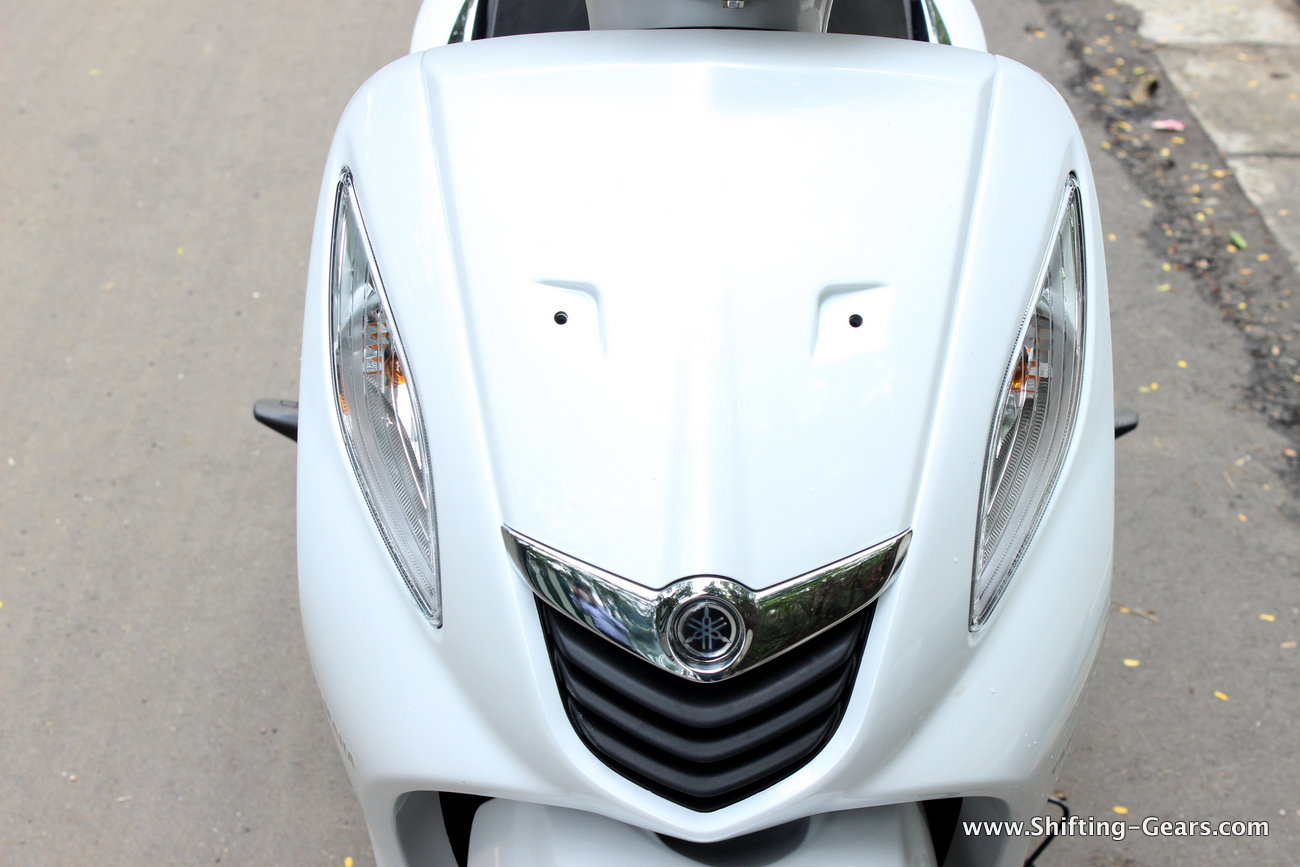 The Fascino shares the same platform with the Ray & Alpha. The scooter feels light and zippy and is very easy to maneuver in traffic conditions. Turn-ins are quick and this makes it a very fun scooter around the corners. The Fascino is the lightest Yamaha scooter weighing 103 kg, 1 kg lesser than the Ray & Alpha. Suspension setup is ideal for Indian roads and the Fascino does not loose composure over potholes. However, hard bumps will surely share jerks with your body thanks to the stiffer front fork.

MRF Zappers offer very good grip. Even though the roads were wet after initial showers in Mumbai, the tyres held on to the road really well. Braking performance comes with drums at the front & back. Although a disc brake at the front would have been welcomed, these drum brakes are really good and offer confidence inspiring bite. Combi-brakes would also have been a thoughtful addition, even if it was provided optional. 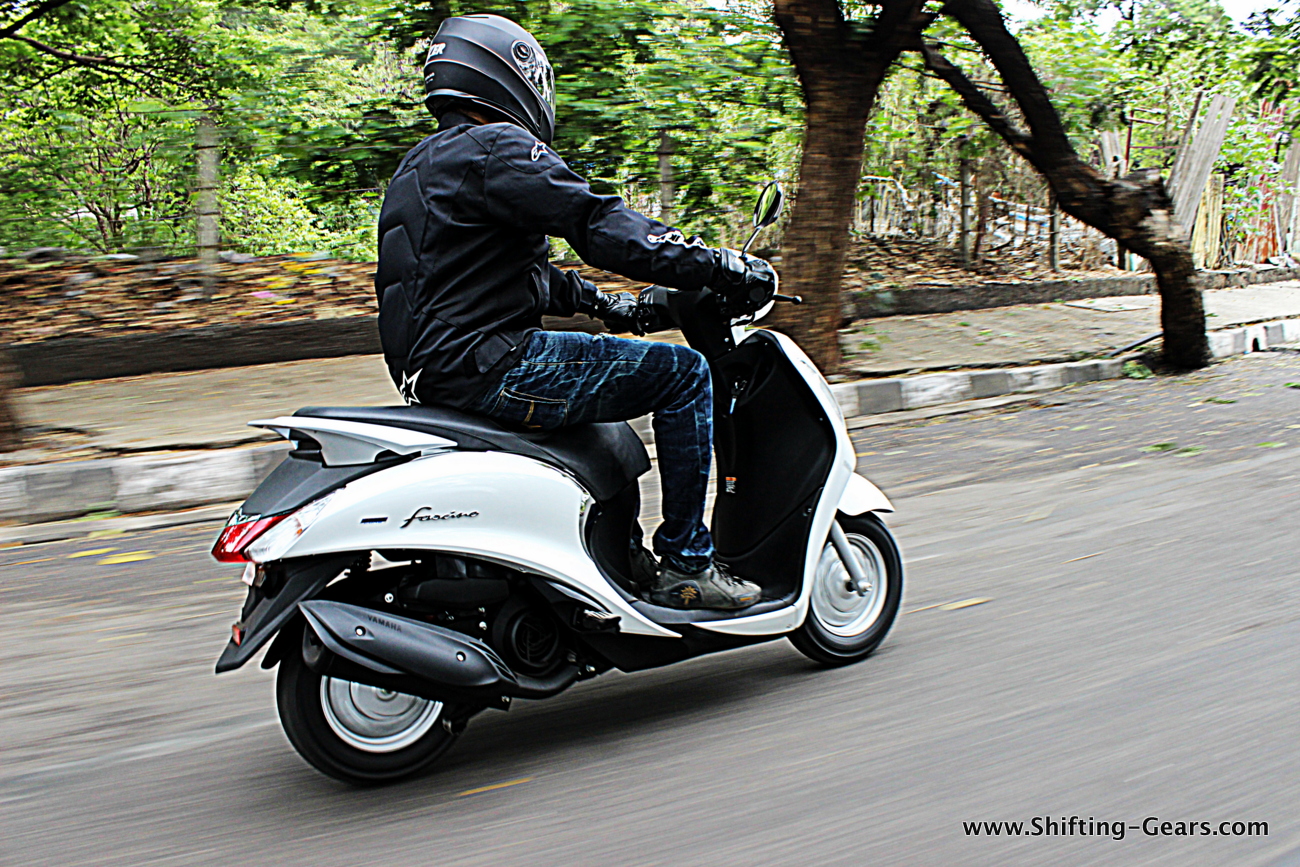 To wrap things up, the Yamaha Fascino is not just a pretty looking scooter, but is dynamically rich too. Priced sensibly, the Fascino has what it takes to attract those customers who find the Piaggio Vespa a bit too pricey but want all that bling on their daily ride. Styling is subjective, but if you’re open to new designs; the Fascino can actually make the deal for you. Yamaha planned to Fascinofy the market with the Fascino, but we hope the Japanese manufacturer puts in some effort in marketing this scooter, as we’ve barely seen any promotional activities except for the launch event, till date.

Click here to check out the Yamaha Fascino photo gallery.