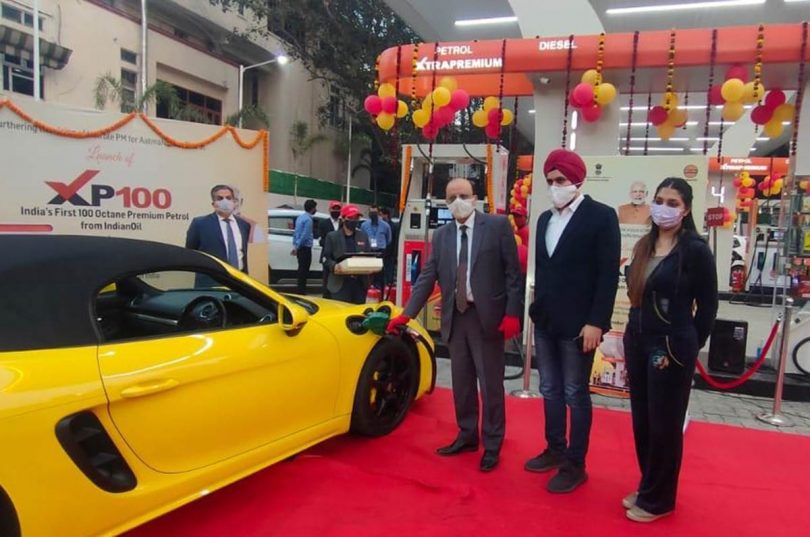 The largest commercial oil company in India, IndianOil has launched a new fuel by the name XP100. It is the country’s first 100 Octane petrol and is priced at Rs. 160 per litre i.e. Rs. 77.66 more than the Octane 91 petrol (all prices mentioned as per availability in Delhi). It will be available in select 10 cities starting with Delhi, Gurgaon, Noida, Agra, Jaipur, Chandigarh, Ludhiana, Mumbai, Pune and Ahmedabad. Then, the services will be extended to a total of 15 cities which would see the addition of Chennai, Bangalore, Hyderabad, Kolkata and Bhubaneswar at a later date. IndianOil says the cities have been decided by keeping in mind the aspirational demographics and availability of high-end cars.

IndianOil claims the XP100 petrol will significantly boost engine performance, give better drivability, faster acceleration, enhanced fuel economy and improved engine life. It exceeds IS-2796 specifications with much-reduced tailpipe emissions and hence also is an environment friendly fuel along with offering excitement once the throttle is pinned.

This fuel will mostly be used in luxury cars and high-capacity bikes, whose engines have a higher compression ratio. The higher the octane number, the more the fuel can withstand compression without igniting. In petrol engines, fuel and air are mixed and compressed, then it is ignited using spark plugs near the end of the compression stroke. Higher the octane number, more resistant is the engine from knocking. Knocking is defined as the uncontrolled ignition of fuel that destroys the engine in the long run. The regular petrol which we use is of 91 octane.

There was a huge demand from luxury car and bike owners to bring up high octane fuel, as there were very limited fuel pumps offering the same in India. The previous highest octane petrol offered was the ‘poWer 99’ by Hindustan Petroleum Corporation Limited and was available in very limited cities. This XP100 will be produced by IndianOil’s refinery located in Mathura, Uttar Pradesh using the indigenous OCTAMAX technology developed by IndianOil R&D.

Meanwhile, Shell is doing a fine job attracting customers who want to fill up high octane fuel in their cars and bikes. Point to note, Shell also has a small cafe setup at their fuel pumps which adds a lot of convenience on long drives / rides.