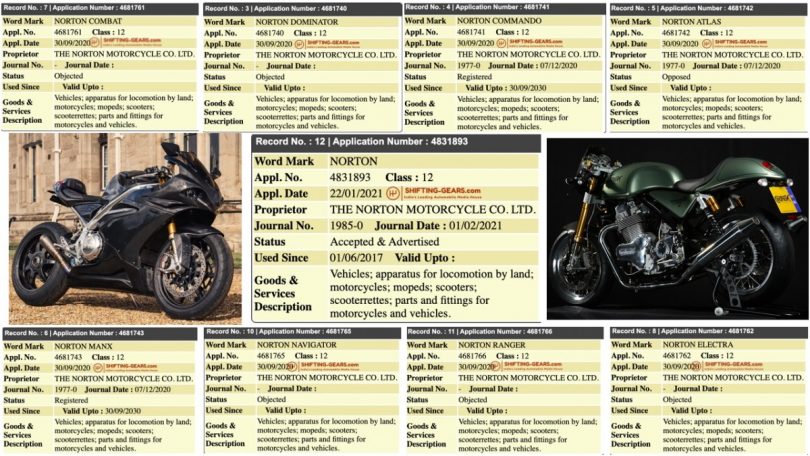 Norton has filed patents for multiple names in the Indian market. Norton registered some of the wordmarks back in 2020 after TVS Motor Company acquired Norton Motorcycles in an all-cash deal remuneration of GBP 16 million. Some of these patents opposed some objected at the Indian Intellectual Property Office, while a few were registered and published.

Now, rumours are that Norton is filing back some of the rejected patents in India. This leads us to believe that the brand is planning to bring these motorcycle to our market soon. These include the Commando, Atlas, Manx and Fastback. The intellectual property office has registered the Commando and Manx out of the four wordmarks. The ‘Norton Motorcycles’ brand is also in use since 2017 when Norton had made entry into the premium Indian motorcycle scene with Kinetic Group’s Motoroyale.

According to six patents filed at the European Union Intellectual Property Office, Norton is developing new motorcycles under the new joint venture. This range could include motorcycles ranging from 600cc to 1200cc across segments from cruisers to supersport motorcycles. Apart from the mid to heavy segment, Norton is also likely to develop new motorcycles for the entry-level market.

For example, Norton used the Norton Electra and Navigator names on 383cc and 350cc Norton motorcycles in the 1960s. Norton could bring back the nostalgia with a modern-classic motorcycle. Recently, the modern-classic segment has seen increased demand, with manufacturers such as Royal Enfield, Honda, Benelli and Java fighting for space.

The Atlas, Nomad and Ranger are like to come with a 650cc twin-cylinder engine, and Norton is also likely to bring the V4SS in limited numbers to showcase its engineering prowess. The Norton V4SS a full carbon fibre bodywork, Isle of Man TT-developed chassis and a 1200cc 72-degree V4 water-cooled engine that produces 200 BHP of power and 130 Nm of torque. Norton will sell only 200 units of the V4SS in the global market.