Following the patent filings for the Zepplin and the Zepplin R, the Chennai-headquartered multinational two-wheeler and three-wheeler manufacturer TVS Motor Company has now filed a new patent called Raider and Retron. The Raider moniker comes with a ‘125’ suffix leading us to believe that the former is an internal combustion engine-powered motorcycle while the latter is likely to be an all-electric scooter.

TVS could be paying homage to the Dakar team with the new Raider moniker and is likely to be a commuter class motorcycle that will rival the likes of Hero Super Splendor, Honda Shine etc. This is not the only 125cc motorcycle that has appeared on the documents published by the patents office.

Recently, TVS also registered the Fiero 125 name leading us to believe that the brand could bring the Fiero back in India. The 125 suffix also suggest that the Raider and the Fiero are likely to share their powertrains. The powertrain is also likley to make around 9 PS of power and 10 Nm of torque matched to a 5-speed gearbox.

While reports of the Retron are still unconfirmed, the name could have been derived from the Creon concept showcased at the Auto Expo 2018. The Retron is likley to be based on the Creon concept and the all electric scooter is expected to be powered by a 12 kW electric motor coupled to a lithium-ion battery which is nearly three times the size of electric motor offered on the TVS i-Qube 100% electric vehicle. But the Sporty Retron could rival the Ather 450X in the Indian market.

Apart from the Raider, Retron and the Fiero 125, TVS Motor Company has also filed patents for the Zepplin & Zeppelin R moniker which is likely to come with a mild-hybrid powertrain, becoming the first two-wheeler in India to sport battery assist on the internal combustion engine. As of now, the information is limited and we will have to sit tight and wait before hypothesizing any further. 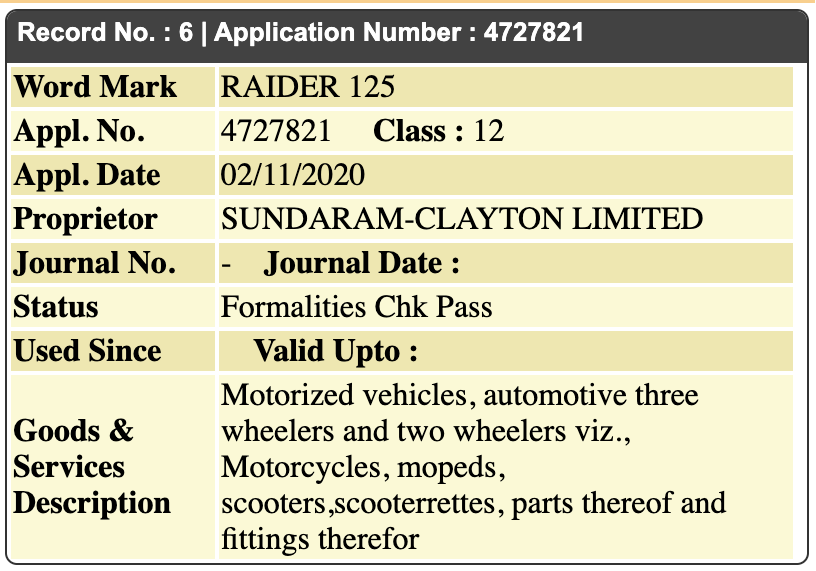