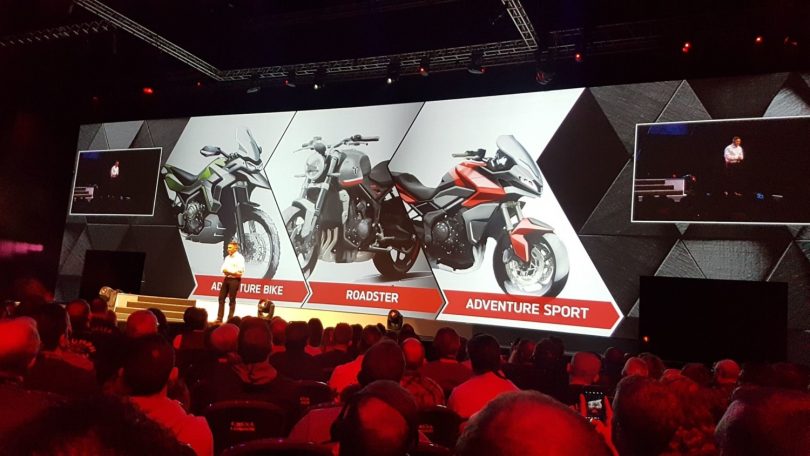 The image from a Triumph Dealer’s meeting showcases rendered models of a new adventure motorcycle, the Triumph Trident Roadster and another Adventure Sports motorcycle which was earlier speculated to be powered by the same 900cc triple engine from the latest generation Tiger. But because the other two are on the same page as the latest debutant the Trident 660 it is safe to hypothesize that the other two could share the triple powertrain to compete in the middleweight category.

However, the brand is likely to tune the engine according to the segment, where the full-bodied adventure is likely to be more off-road biased, the other adventure sports is expected to be tuned with a sporty charecter for upright fun on the tarmac. Furthermore, only the chassis and powertrain are likely to be shared and both are expected to come with distinctive bodywork and pieces of equipment.

The Triumph Trident 660 is powered by a 660cc three-cylinder water-cooled 12-valve DOHC motor that produces 81 PS of power and 64 Nm of torque matched to a 6-speed gearbox. The other two adventure class motorcycles are also likely to be powered by this same motor. When the brand launches the Adventures which clearly draws its design inspiration from the Tiger 900 is likely to compete with the Suzuki V-Strom 650 and the likes, the Adventure Sport could rival the Kawasaki Versys 650 and the recently revealed Trident roadster will lock horns with the Kawasaki Z650.