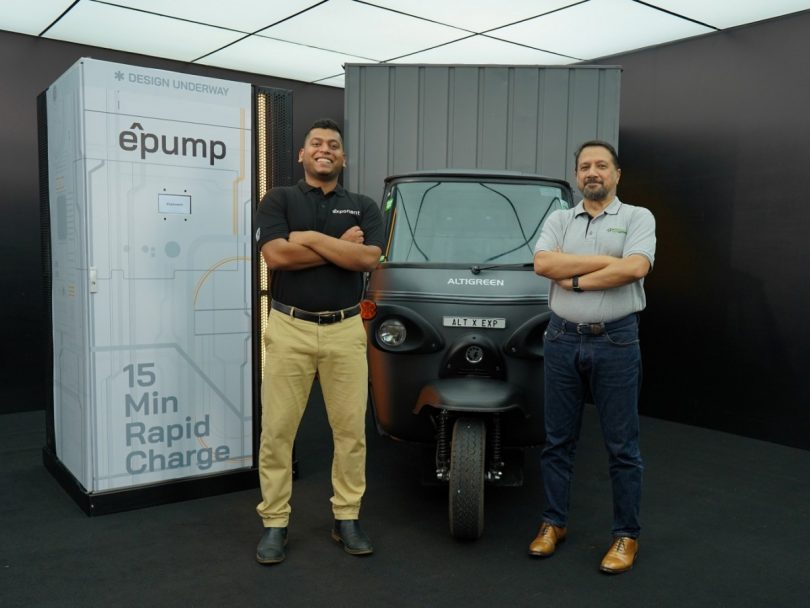 Exponent Energy, a start-up simplifying energy for electric vehicles, has partnered up with Altigreen Propulsion Labs, one of the leading commercial vehicle manufacturers, to make rapid charging a reality for electric commercial vehicles on Indian roads. The two recently unveiled the fastest charging electric 3-wheeler. It is able to charge from 0 to 100 per cent within 15 minutes.

With a fresh round of investment worth INR 300 crore led by Sixth Sense Ventures, Reliance New Energy, Xponentia Capital and more, Altigreen is ramping its R&D & production capabilities. At the same time, it is also developing a robust pan-India distribution network. This will help it offer India the best and cleanest last-mile transportation. The same will also be beneficial for Exponent’s 15-minute rapid charging across the country.

On the other hand, Exponent Energy has raised USD 6 million so far. With its recent fundraiser that also included the family office of Hero MotoCorp’s Chairman and CEO, Exponent Energy is ramping up its e^pack production. Furthermore, in its first leg, Exponent wants to have 100 e^pumps across Bengaluru.

The AltiGreen neEV HD, which is also Exponent-Enabled, features an 8.19 kWh e^pack. This e^pack is a proprietary battery by Exponent. The commercial EV delivers a city range of 80 to 85 km. The main highlight is the charging speed. According to the two companies, it takes 15 minutes to charge at Exponent’s e^pimp network.

To achieve this, the e^pump pushes out 600A of current to the e^pack, which is 15 times higher than the current industry standards. Additionally, it also manages individual cell characteristics. These include – thermals to ensure battery safety and long battery life. According to the company, it will also maintain performance consistency even in temperatures as high as 50 degrees Celsius.

In 18 months of the e^pack’s evolution, Exponent collected data for thousands of charging cycles, which is equivalent to lakhs of kilometres. After jointly developing and on-road testing it with AltiGreen for 6 months, the solution is now road-ready. One of the few milestones is 5 back-to-back rapid charge cycles and 400 km run in a single day. Another milestone is clicking 10,000 km of city driving in 40 days.