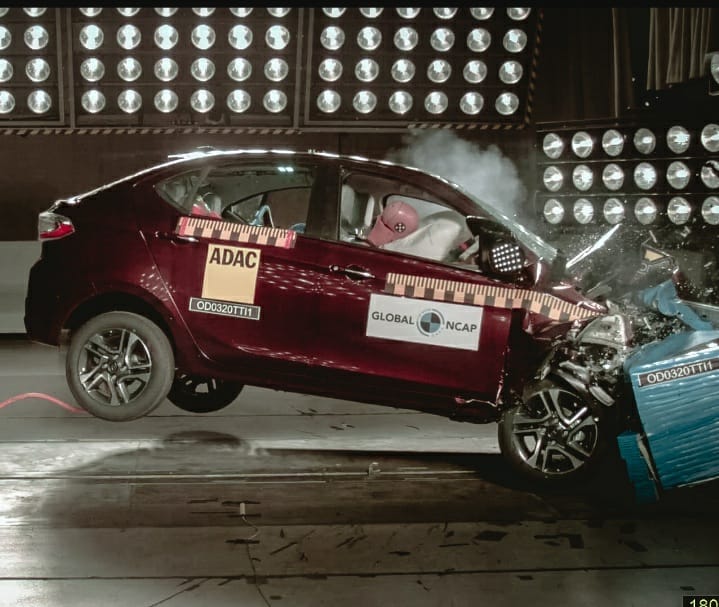 For the crash test, a right-hand-driven, 5-door sedan/hatchback, entry-level models were chosen which come with dual front airbags as standard and both achieved 4-stars (12.52/17.00 points) for adult occupants and 3-stars (34.15/49.00 points) for the child occupants. The head protection for both the driver and front passenger was shown as ‘good’ while the crash test recorded an ‘adequate’ to ‘marginal’ protection to the torso and femur. The body shell and foot well area was rated unstable and could not be subjected to further crash load. A 3-year-old and an 18-month-old child dummy was used for the crash test where the 3-year-old child was seated in a forward-facing child seat using the adult seatbelt. The 18-month-old child seat was installed in the rearward facing position and both showed ‘good’ protection. The Tata Tigor / Tiago does not offer 3-point seat belts on all seats and also does not have an ISOFIX anchorage system. Also, the passenger airbag cannot be disengaged in case a rearward-facing child restraint system needs to be installed in the front seat.

The Tata Tigor / Tiago is powered by a 1,199cc three-cylinder Revotron petrol engine producing 86 PS of power at 6000 RPM and 113 Nm of torque at 3300 RPM coupled to a 5-speed manual gearbox or a 5-speed AMT (Automated Manual Transmission), which conforms to the upcoming BSVI emission standards.