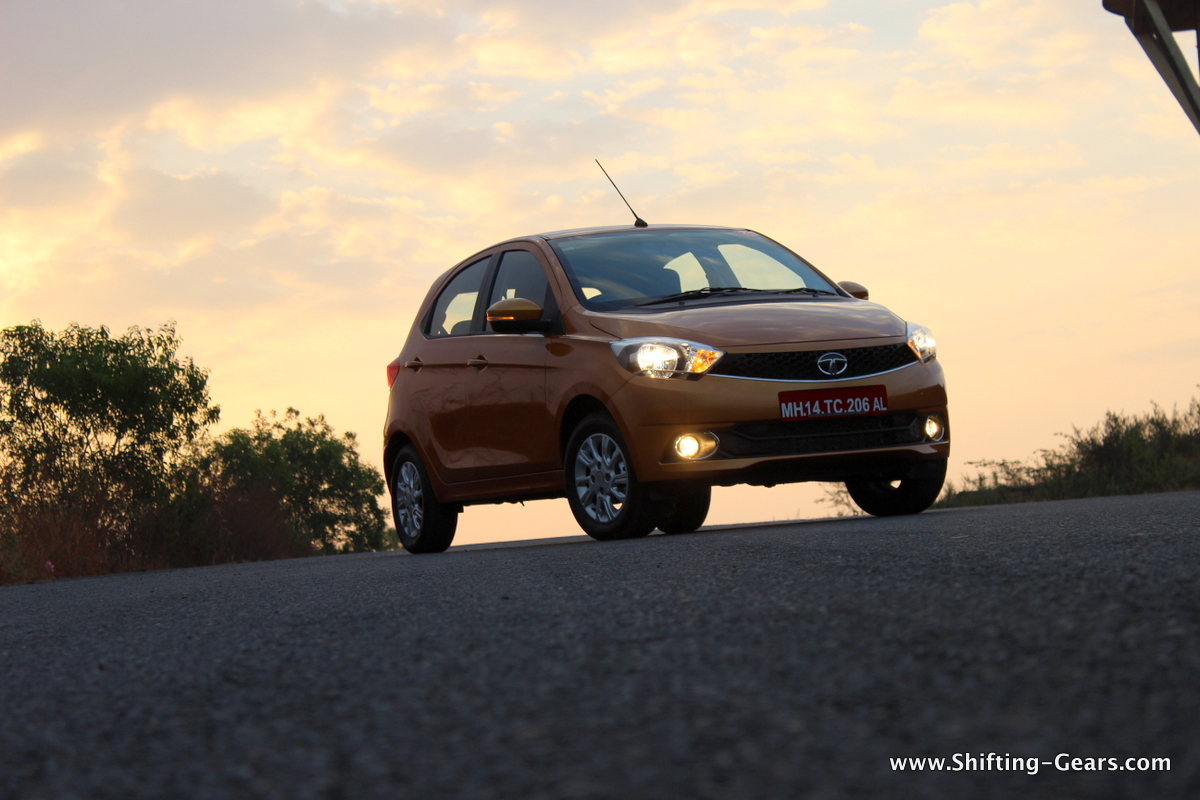 Today we’re out on a date with the backbone for Tata Motors – the Tiago. Now, this car started its journey by being named the Zica, but due to the virus outbreak a over a year back, was renamed as the Tiago. Cut to today’s date, the Tiago is the best selling car for the brand, and it continues to gain popularity.

With prices starting at Rs. 3.30 lakh ex-showroom Delhi, the Tiago is quite a good looking car money can buy. And a good looking car in the hatchback segment from Tata Motors is a new & big deal, considering all the previous Indica & Bolt generations shared the same design DNA. 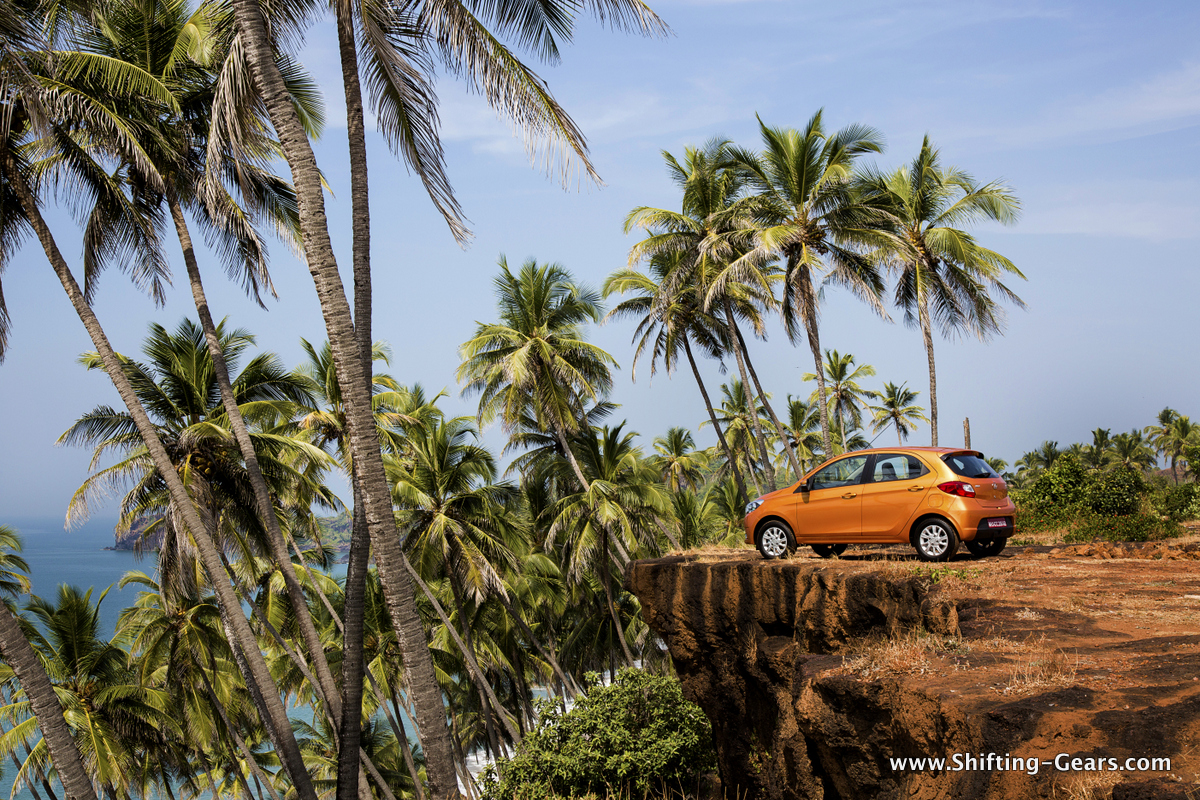 With the Tiago, Tata Motors moved in a new styling direction, called IMPACT DESIGN. And well, it seems to have worked very well. The Tiago unlike any other previous Tata hatchback is a breath of fresh air.

Styling highlights include smoked headlamps, honeycomb mesh front grille, fog lamps with chrome surrounds, decent looking alloy wheels, bold crease lines, dual tone rear bumper and a pair of unique black applique which pose as a rear spoiler. All of this makes the Tiago stand out compared to competition such as the Maruti Suzuki Celerio or WagonR, which are starting to show age. 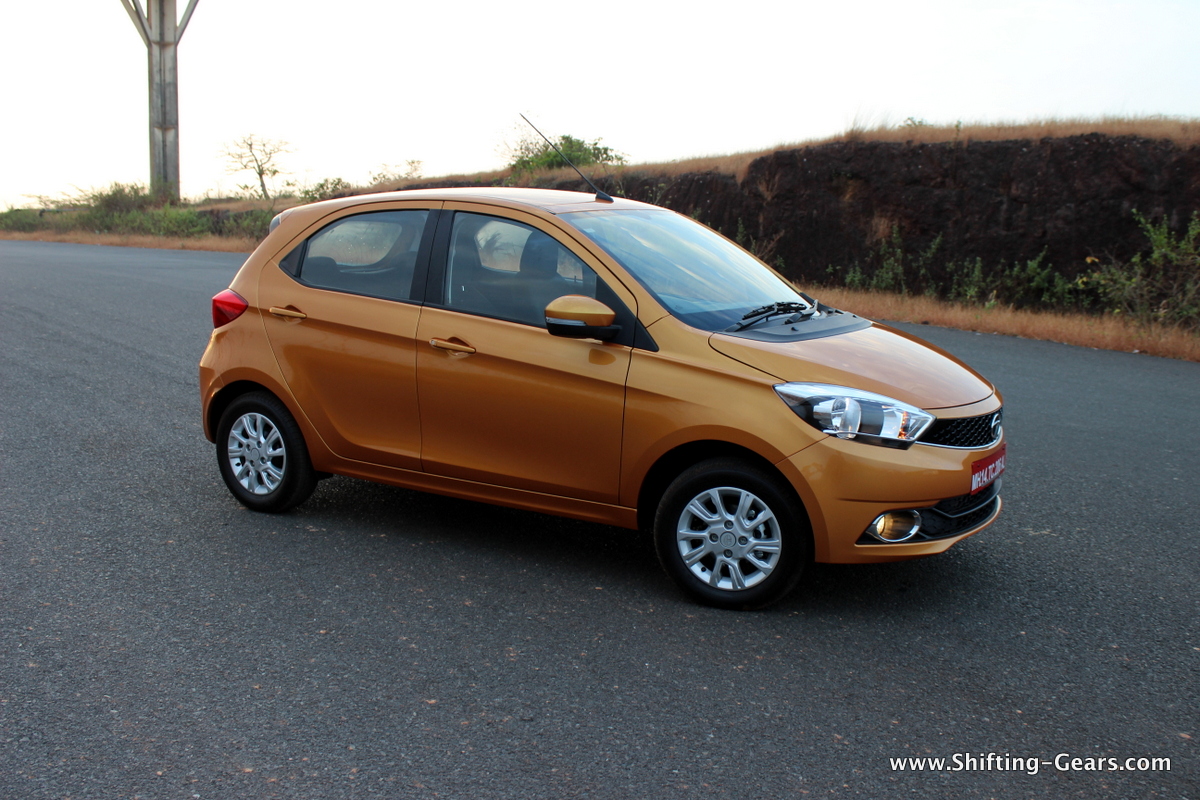 The car comes with all the niceties such as parking sensors, remote locking, turn indicators on rear view mirrors, etc. keeping it at par on the list of equipment by segment standards.

Interior:
The Tiago like we said before is a new design direction, and that shows when you step inside. Interiors feel a lot more premium compared to the segment it is in with good quality materials leaving a lasting impression. 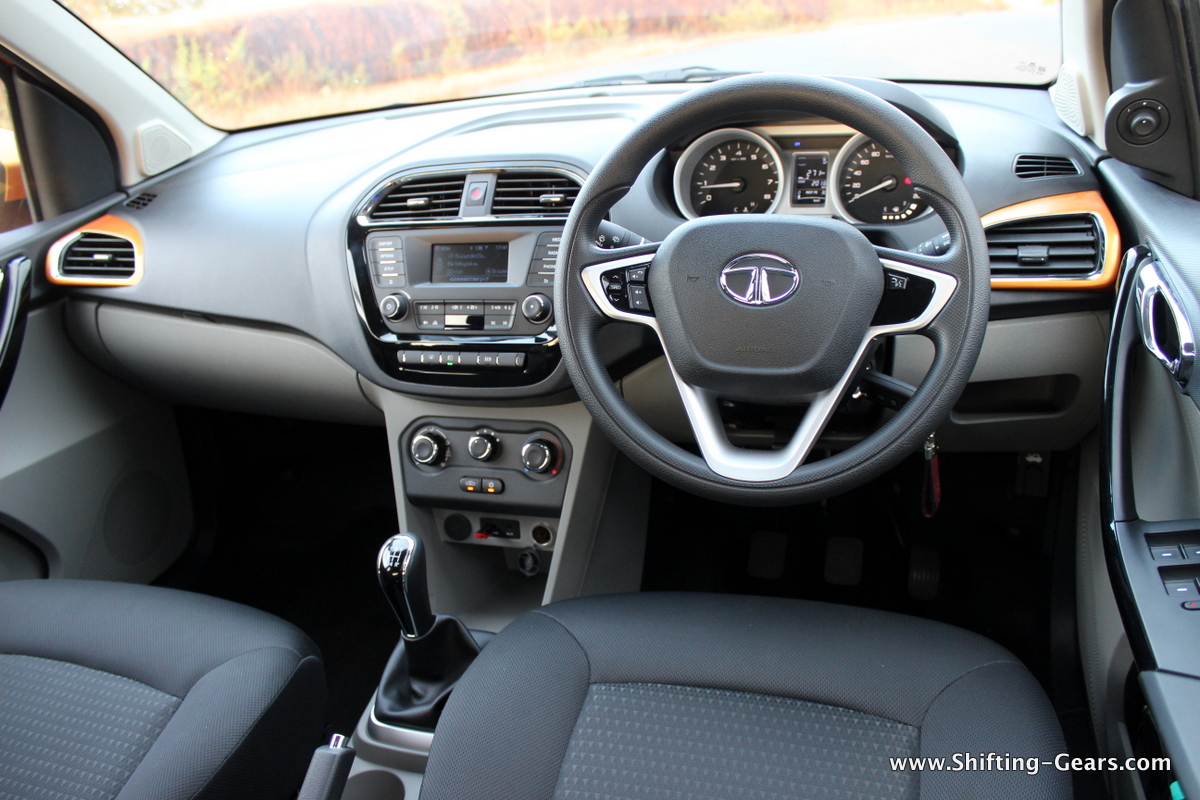 Black & grey interior theme is very sporty, and thanks to the decent amount of greenhouse, doesnt make the cabin feel claustrophobic either. What a few customers would love is that the AC vents on either end get a body coloured applique around it, which is a very unique & thoughtful addition to make a difference. 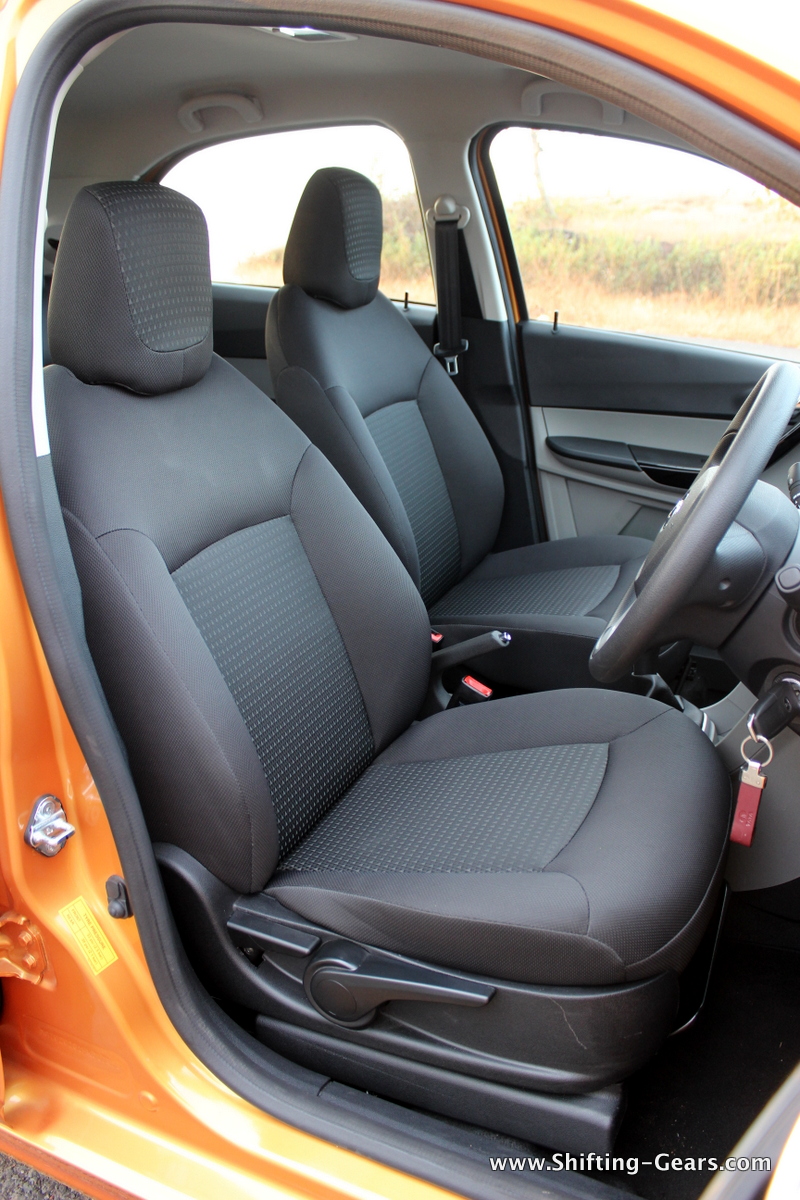 In terms of space for occupants, the Tiago is good enough to carry 4 adults at ease, with space for a kid as the 5th occupant. 3 full size adults on the rear bench is a little squeeze.

Powering the Tiago is a 1.2L Revotron petrol motor producing 84 BHP & 114 Nm & a 1.0L Revotorq diesel motor producing 69 BHP & 140 Nm. Both engines come matched to a 5-speed manual gearbox. The petrol motor recently also got the option of a 5-speed manual gearbox. While the petrol model claims a fuel efficiency of 23.84 kmpl, the diesel is reportedly good to deliver 27.28 kmpl. Now, all this considering a 3-cylinder engine layout is good, but real world numbers are going to be noticeably lesser. 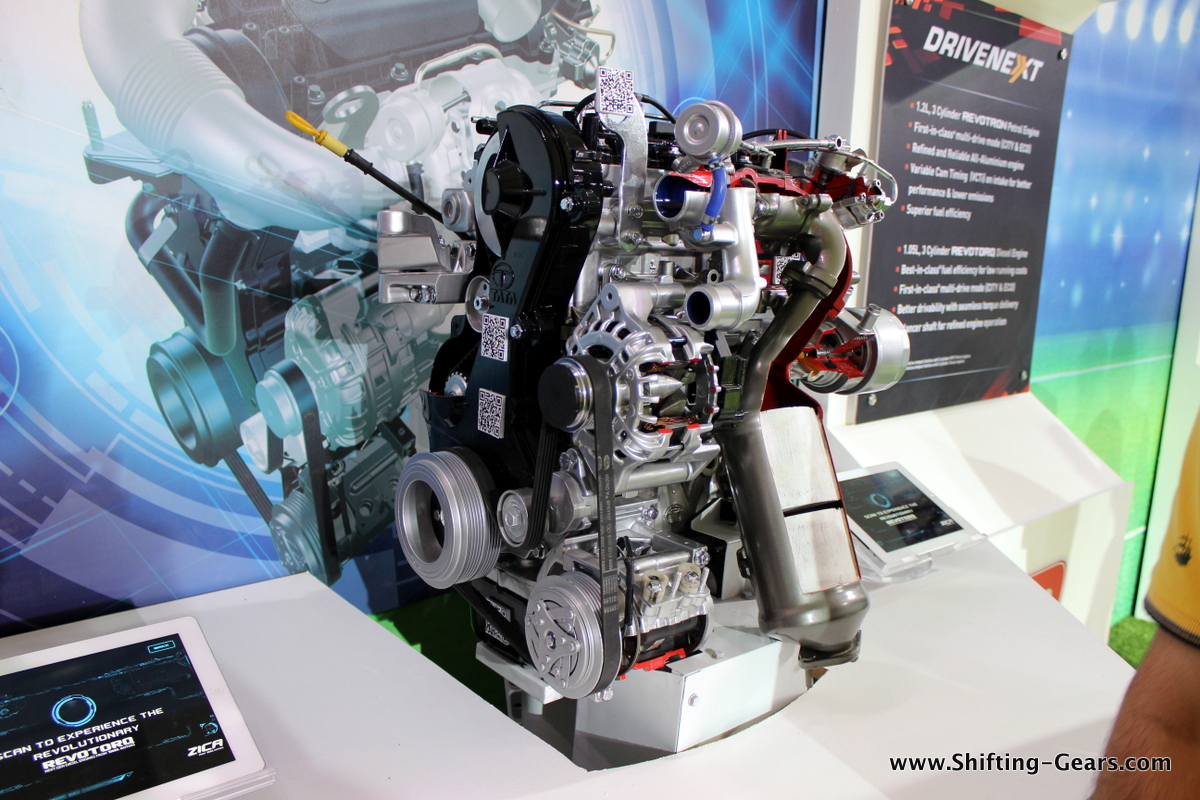 For those who like to play around with their driving style, Tata even offers two driving modes, Eco & City, out of which, City is selected as default every time you fire up the engine. You also get gear shift indication for optimum performance & efficiency.

Now, both engines are 3-cylinder units, so there is a fair amount of vibrations & engine noise creeping in. And if you compare it to the likes of Hyundai Grand i10, then the Tiago falls behind in the refinement department. Both engines are decent enough for your daily urban jungle commute, but it is the diesel motor which we found to be more driveable with that extra torque available across the revv range.

The plus point though is that on both engines, there is not much engine knocking felt, so you can drive around on higher gears at lower speeds without worrying about gearshifts. 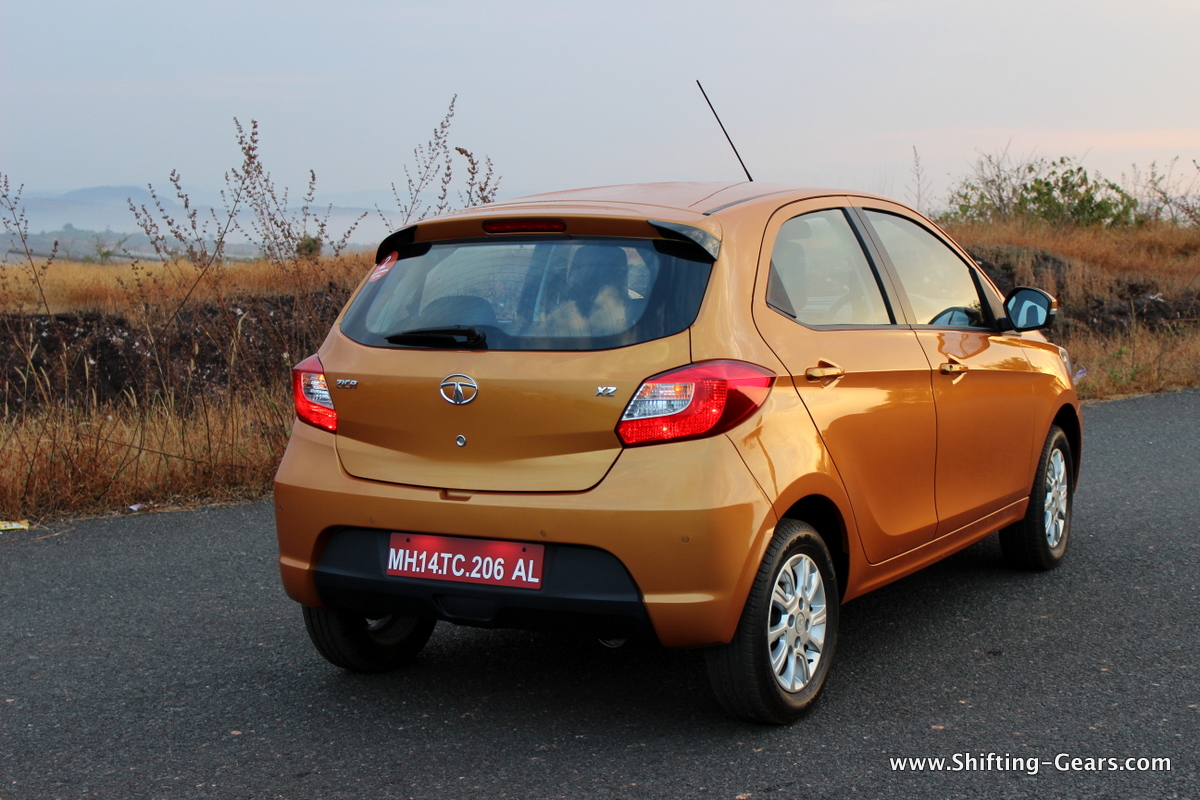 Just like any other Tata car, the Tiago also comes with a suspension setup which handles the Indian road conditions with ease. Compared to competition, the Tiago thrashes bad roads, potholes & even the rumbler strips with ease while keeping the occupants comfortable while doing so.

Tata equips the Tiago with ABS with EBD & even corner stability control for added safety. You also get dual front airbags on top spec variants. So it scores top marks on the safety front.

For the money being asked, the Tata Tiago is a well rounded package. It offers plenty of features, good space, decent performing engines and a very comfortable ride to keep you going. And yes, the highlight is that it looks good, and has nothing similar to the likes of an Indica. So if you want a budget hatchback, you must take the Tiago out for a spin. 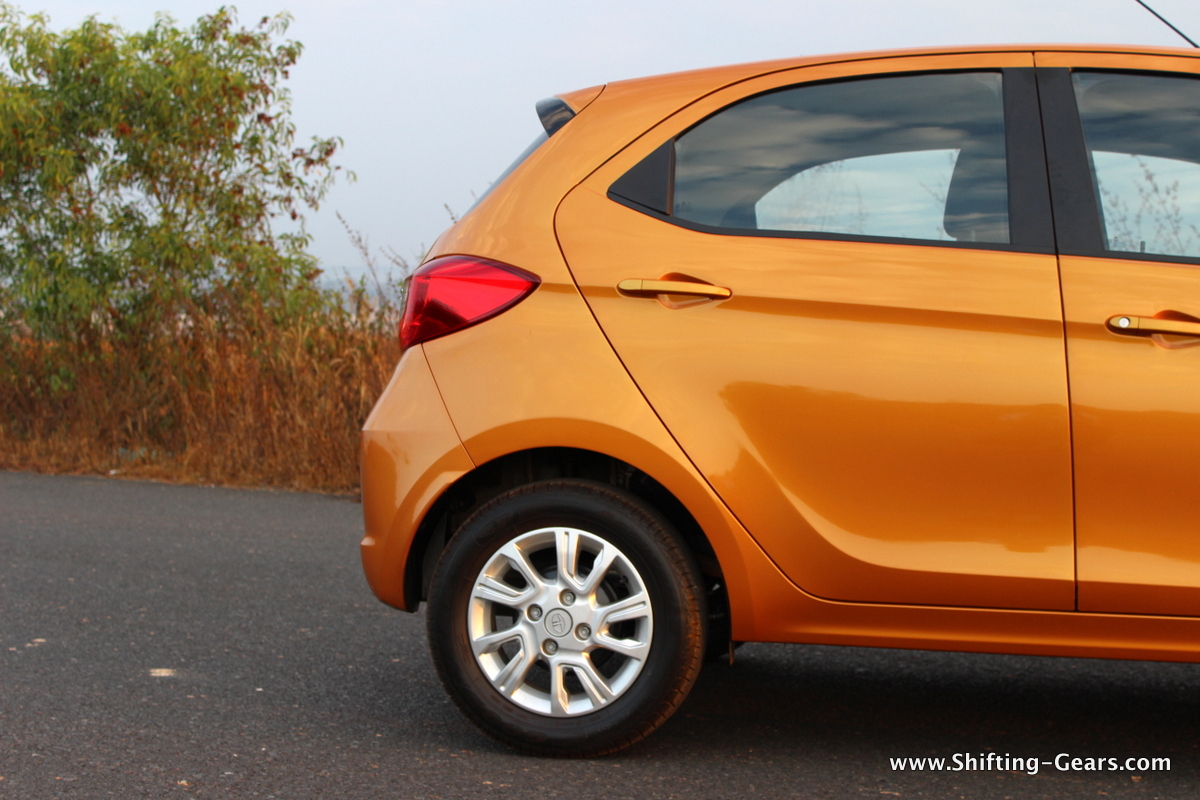 BRINGING TATA BACK ON ITS FEET

When Tata launched the Tiago, it was a make or break kind of a deal. The brand wanted a car which would bring in numbers, and stabilize their market position. Now, compared to competition, the Tiago might not be the best-seller, but with time, it has become the backbone for Tata Motors by being the car that sells the most from the stable.

What has worked in its favour is not that it looks good, but that it does not look anything like the Indica. A major reason why people are walking up to the car. Tata still has the Bolt, Indicar & Nano nameplates on sale, but the Tiago is their star performer in the hatchback segment, and they needed this the most.

Yes, back in the day, reliability & quality were major concerns with Tata products. But now, when you step inside the latest cars, you do feel the change. More premium materials, better build quality & the overall appearance now begs for you to change your opinion, and even we suggest you give the new Tata’s a test drive at least.

After the Tiago, Tata Motors has brought in the Hexa & the Tigor which are again decent cars by their respective segment standards. In the future, you have the Nexon compact-SUV coming up which will have unique styling to appeal to the masses. So overall, seems like Tata is not getting back on its feet. It might take some time to run away with better sales numbers, but it is good to see the Indian manufacturer pick up a fight in the segment.