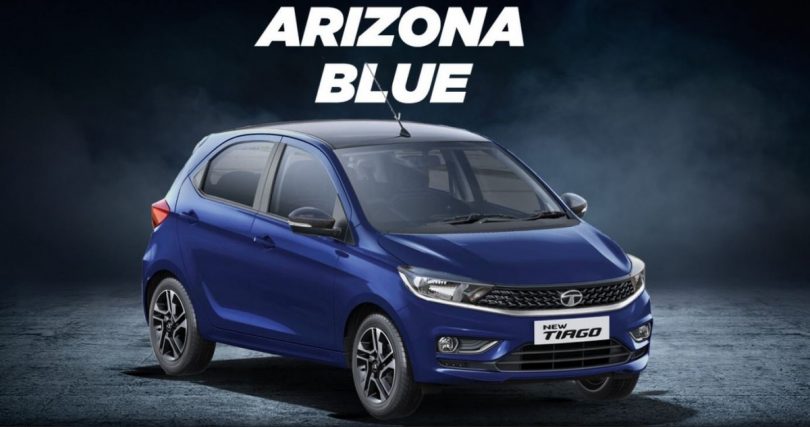 The entry-level hatchback from Tata Motors, Tiago is now available with a new shade of colour called Arizona Blue which replaces the Tectonic Blue colour. The other options available with the Tiago are Victory Yellow, Flame Red, Pearlescent White, Daytona Grey and Pure Silver. In terms of sales figure, Tata Tiago is one of the top-selling products of Tata Motors ever since its launch in the Indian market. For the month of February, the company reported a cumulative sales of 6,787 units which translates to a significant 73% of year-over-year growth. With the launch of the all-new Safari, Tata Motors is all set to reestablish itself as one of the top-selling car manufacturers in India. Almost all of its products are selling in good numbers, which was not the case a few years ago.

Under the hood of the Tiago lies a 1.2-litre naturally aspirated petrol mill which cranks out 85 HP of power and 113 Nm of torque. In terms of features, Tata Motors is offering a seven-inch touchscreen infotainment system by Harman with Apple CarPlay and Android Auto connectivity, auto-fold and electrically adjustable ORVMs, a reverse parking camera, a digital instrument cluster, a three-spoke steering wheel with mounted controls and an eight-speaker sound system. On the exteriors, the 15-inch alloys, roof-mounted spoiler and a contrast black roof add to the sportiness of the vehicle. There are rumours in the media suggesting that Tata Motors will roll out the next generation of the Tiago 2 years from now.

Recently, Tata Motors launched the Tiago Limited Edition, with a limited production run of 20,000 units. Priced at INR 5.79 lakh (ex-showroom) i.e. a premium of INR 30,000 over the base trim XT, it does come with a few add-on features which include, blacked-out 14-inch steel rims, a 5-inch touchscreen infotainment system paired with a stereo from Harman with 4 speakers, navigation using navimaps and more. Recently, Tata Motors introduced the AMT version of the XTA trim which is now the most affordable Tiago with an automatic gearbox.