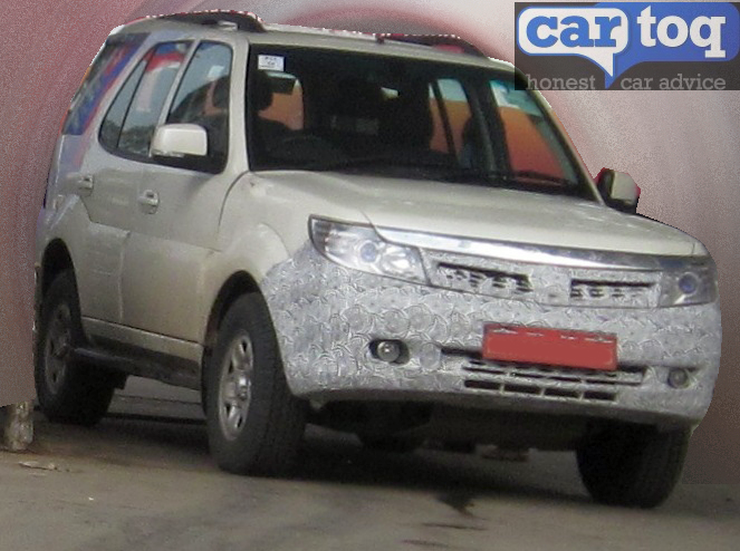 A test mule of the Tata Safari Storme has been spotted testing in Pune with camouflage on the front end. Seems like Tata Motors is going on a product offensive. Now that the Zest compact sedan is already launched, and the Bolt slated for launch in a couple of months, Tata Motors has started working on products to come after that.

From the spyshots, we can see that the SUV now gets revised front bumper design and also a honeycomb grille. Looks as if Tata is trying to give all their cars a family face, with the humanity line seen on the Tata Zest. Headlamps remain the same with projectors in place. The variant spotted seems to be a mid-variant since it wasn’t running with alloy wheels. Side profile remains untouched and the rear is not visible in this picture. However, do expect a few tweaks to the rear end design as well.

Rumours suggest that the Storme will now get changes even on to the interiors with a revised dashboard. A Harman-developed infotainment system with steering mounted controls, front-facing third row seats etc. could be offered.

Powering the Safari Storme will be the same 2.2L VariCOR diesel engine, however, power ratings are expected to be bumped up to 150 PS & 320 Nm, as seen in the Aria.

Since the updates are not too mechanical, we cannot deny the possibility of the facelift Safari Storme making it to the streets in the festive period.