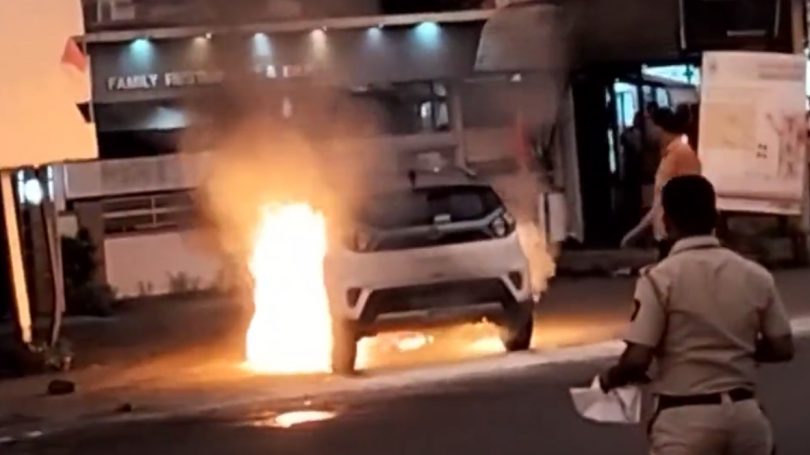 Recently a video surfaced online on social media showing a Tata Nexon EV catching fire. According to the user, it was shot in the Vasai West area of Mumbai in Maharashtra. This is the first time we are seeing a fire incident for Tata’s popular Nexon EV. So far, the model has been very popular and a major contributor to Indians adopting EVs.

The incident will definitely raise concerns in the eyes of the general audience. The video also shows firefighters present and trying to eliminate the fire. Also, from the looks of it, no one was present in the car. Plus, there have been no reports of any injuries to the owner or any other person around the car.

After the user who uploaded the video tagged Tata Motors’ official Twitter account. The company was quick to take notice of the incident. The carmaker has also released a statement regarding the incident.

Tata says they are currently conducting a detailed investigation of the incident. It will ascertain the facts of the incident that is doing rounds on social media. Tata does mention that it could be an isolated thermal incident. The company will share a detailed response after the investigation completes. Tata also said it remains committed to the safety of its vehicles and their owners. Tata goes on to say that this is the first incident for any of its EVs. So far, over 30,000 Tata EVs have cumulatively covered over 100 million km. This is in a span of nearly 4 years.

The company currently has 3 EVs in the passenger car segment. The first and most popular model is the Nexon EV. After the Nexon EV’s success, Tata introduced an EV version of its Tigor sedan. Since then, Tata has captured almost half of the EV car market in India. The company recently introduced the Nexon EV Max. The Nexon EV Max brought more features, tech and a bigger battery. Deliveries are yet to start, but it received a good response from the customers. Currently, the model has a waiting period of over 4 months.