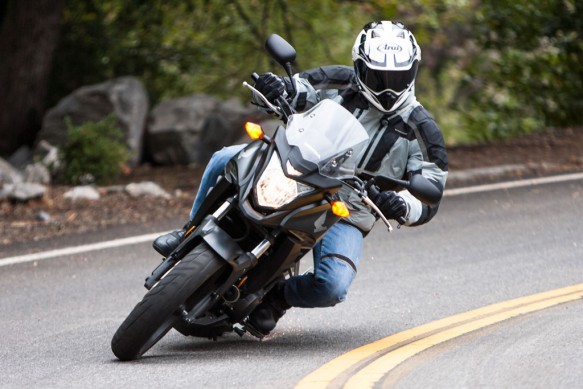 Riding motorcycles has been accounted as one of the most challenging and fatal experience since decades, but there is something attached to riding a motorcycle that makes it special for some. That something special is the feel of freedom. But this feel comes at a price that proves fatal for some. Crashing a motorcycle is not something a rider would want, but even if it happens it should not be on a curve or a corner. Corners are dangerous and exciting at the same time, but they are also the place where most of the riders commit mistakes. So, here are some techniques to save yourself from a mid corner hazard.

Corners are subject to poor visibility issues and while maintaining pace and maneuvering through a corner section with a mid lying hazard can be a real issue to deal. There are mainly two ways to avoid a mid corner maneuver. 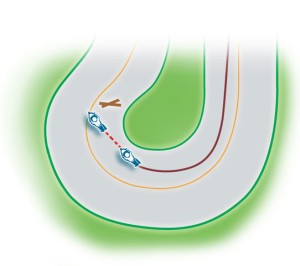 If you have the room, it may be better to go around the outside of the problem (go around the left of the obstacle in a right hand turn and vice versa). However, this may be a poor choice if it means that you risk going off the road or into the oncoming lane. Also, once past the obstacle, you will have to quickly turn to stay in your lane. 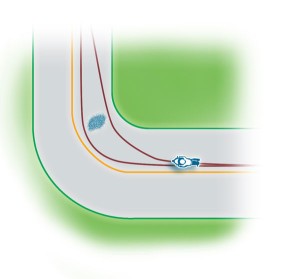 Other option includes maneuvering inside of the corner. This takes high confidence level from rider and tyres and also requires high lean angles. If done correctly these options keeps you inside of your lane but while on a left turn your upper body might be hanging over the central line of road and you could get hit the oncoming traffic. Another reason why this option may not turn out well is if you fail to turn tight enough to actually avoid the hazard…and you’ll hit the object at a greater lean angle. Not good.

Braking on a curve is one of the hardest technical complexities that riders face. Braking on curve means less traction due to lean angle of motorcycle and less traction results into bad breaking. In some conditions when you can’t avoid the obstacles the urgency to stop is preferred by human safety tendency. Basically breaking on curve can be divided into two parts. 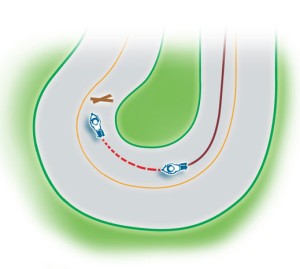 In this technique, you need to straighten the bike (using counter steer technique) as fast as possible and then apply brakes as hard as possible without skidding the motorcycle.
This technique might sound good but straightening the bike on a curved path means either you would be slipping to the oncoming lane or the off road dirt, which, might prove dangerous in fast speeds.

When straightening before braking is not possible, or when you have a bit more time to stop, you can use the “brake while straightening” option. This technique involves applying the brakes as much as possible to slow, but not so much that traction is exceeded. Lean angle will decrease as the motorcycle slows making more traction available for braking. Brake progressively harder as the motorcycle straightens fully.

Anti Lock Braking system is also an effective measure for preventing mid corner hazards as the prevent the locking of brakes in panic conditions especially over the turns. Also, newer motorcycles are coming fitted with cornering ABS that also detects the speed, lean angle and braking force need to stop the bike consecutively while cornering.

All the above measures would help you crashing on a beautiful corner but at the end it’s you who has to be safe for yourselves and others. Ride within your confidence levels, keep practicing and such “surprise” obstacles would be more easy to handle.