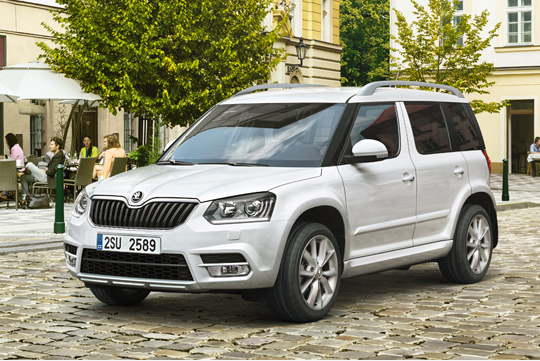 Skoda revealed the Yeti facelift to the Indian customers at the 2014 Auto Expo held in Noida, UP. Internationally, the Yeti is available in two versions – Outdoor and City. The one we saw at the Auto Expo was the outdoor version of the soft-roader. The car was also spotted testing on Indian soil a couple of times, and gets bolder styling compared to the city version.

The facelift is expected to be launched on September 10.

The facelift gets the new family face with a wider front grille and sharper headlamps. The round fog lamps have now been removed and a different set is now placed lower on the redesigned front bumper. Overall profile of the car still remains the same, with the amount of greenhouse staying identical. On the rear, the tail gate and tail lamps also have been revised.

On the equipment front, the car is expected to get electric adjustment for the driver seat, cruise control, rear view camera, keyless entry etc. It will also get a new three-spoke steering wheel and a different interior colour scheme.

The Yeti will be powered by a 2.0L turbocharged diesel engine in two states of tune – a 108 BHP FWD and a 138 BHP AWD version. There won’t be an automatic gearbox option available.