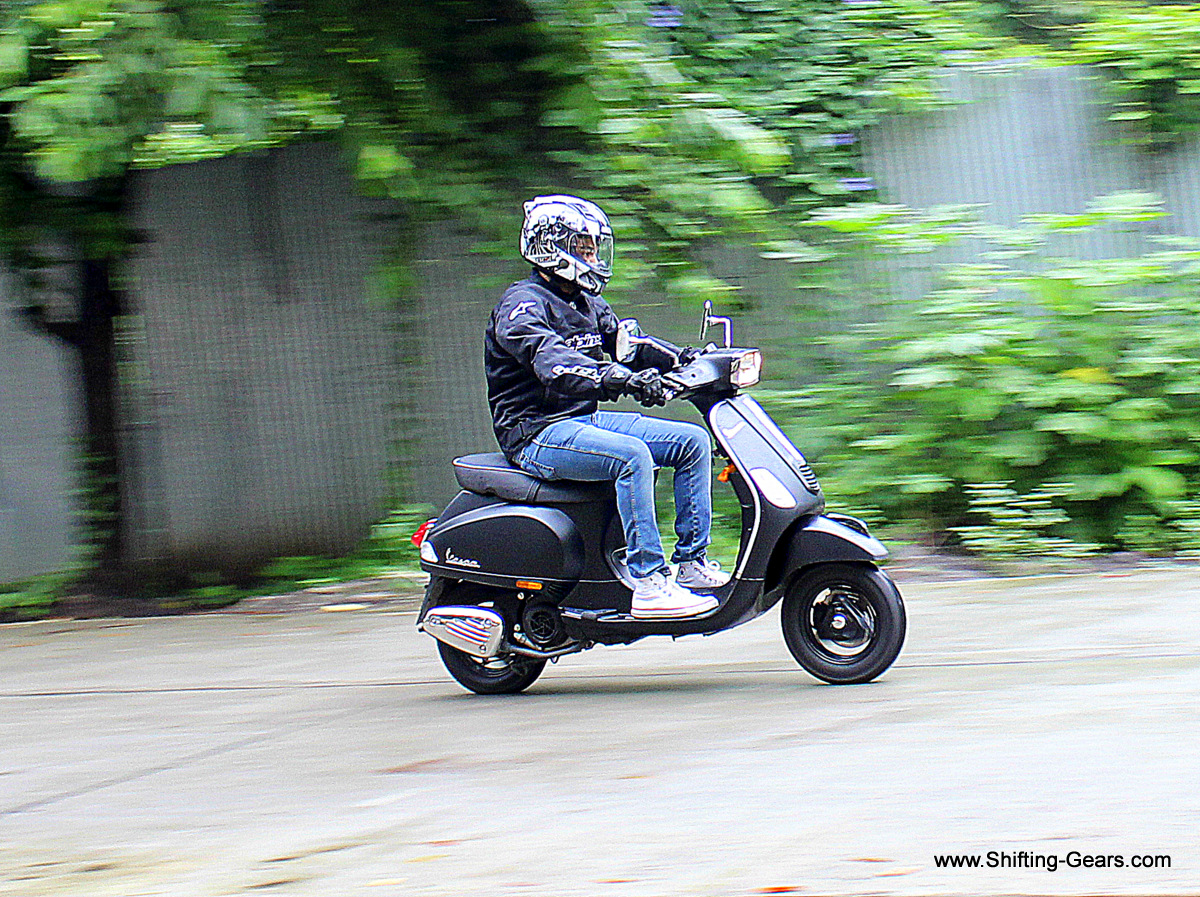 The Vespa is an iconic brand in India, not only in today’s date, but always has been over the past couple of decades. Piaggio first entered the Indian market with the production of Vespa scooters licensed to Bajaj Auto, in 1960s. But in 1971, this license wasn’t renewed. When this happened, Bajaj continued to sell the scooters with the Vespa design language dubbed as the Chetak. In 1983, Piaggio entered a joint-venture with LML and continued to produce products till 1999. In 2012, at the Indian Auto Expo, Piaggio re-entered the Indian market with the Vespa scooter, and this time, without any local partner. A new facility was set up at Baramati, Maharashtra and was inaugurated on 28/04/2012. An investment of Rs. 100 crore was made as of December 2011 and the initial production capacity was of 1,50,000 units / year which was supposed to be doubled to 3,00,000 units by mid-2013. Parts for the Vespa being sold currently are 100% localised.

When we say that the Vespa is iconic, it looks the part. The scooter even without any significant bells and whistles compared to its competitors manages to look unique, and is without a doubt one of the best looking products in the segment till date. Sighting rapid growth in the scooter segment in India, rather than adding new models, Piaggio has launched multiple variants of the Vespa scooter. As of date, we have a total of four Vespa’s on sale – Vespa, Vespa VX, Vespa S and the limited edition Vespa Esclusivo. All of these variants carry forward the same mechanicals, with a few cosmetic changes here and there. With the price touching about Rs. 90,000 on-road Mumbai, the Vespa S is the most expensive scooter to be sold in India right now. 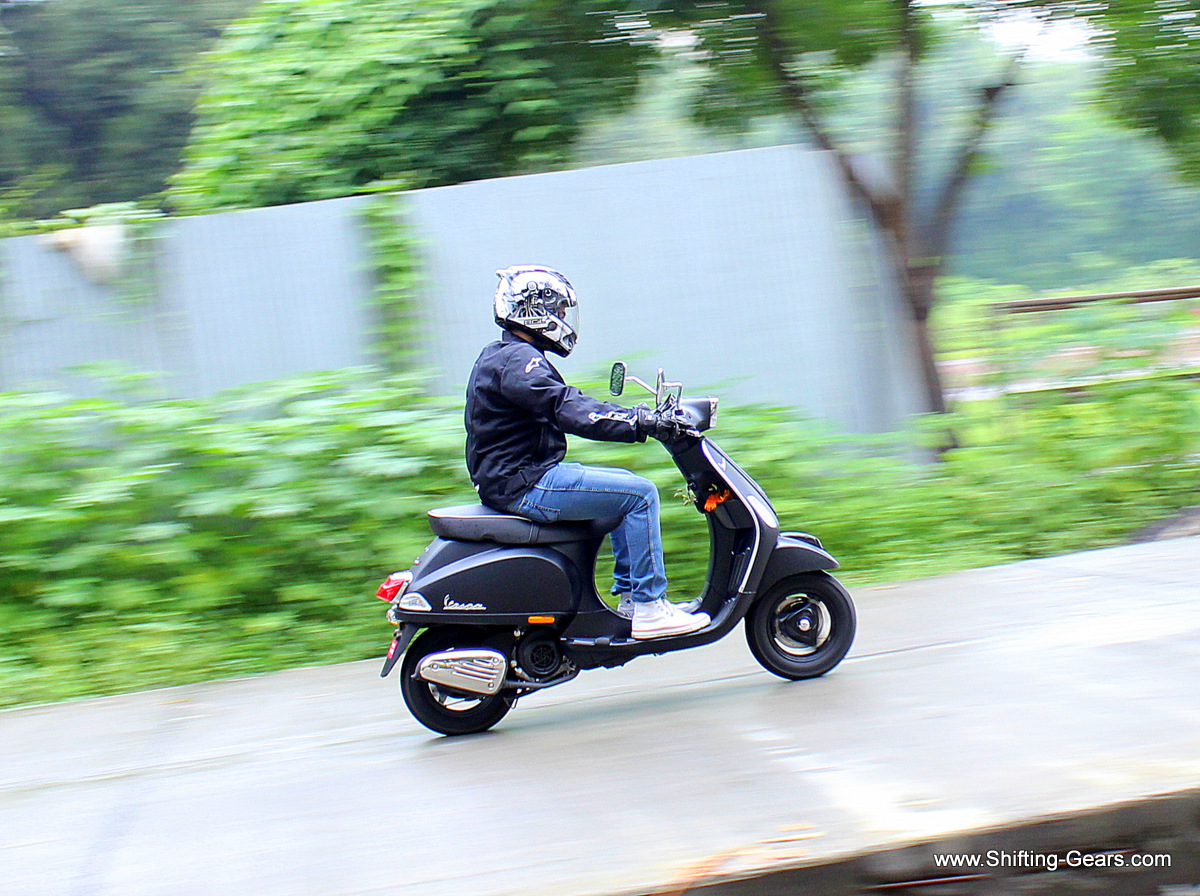 The Vespa S is powered by the same 125cc engine, but gets some cosmetic changes

Design:
One glance at the Vespa S and you simply love it. It is sold in 4 colour options – Orange, yellow, red and matte black. We got the matte black version and we must say that it looked brilliant. The paint quality was far superior to the competition; however, the matte paint needs a tad bit more cleaning than the gloss-painted variants. Built around a monocoque chassis, the scooter does not have too many panel joints, and hence, very less chances of having unusually wide panel gaps. While the matte black paint job is an indicator that this variant of the Vespa belongs to the ‘S’ category, there are other noticeable changes as well. The major differentiator is the rectangular headlamp. All other Vespa variants get a round headlamp, but the Vespa S has a rectangular unit with chrome surround. To compliment the headlamp, it also gets rectangular rear view mirrors in chrome, unlike the round ones on other variants. Also, the silver alloy brake levers try that little bit more to add to the colour coordination. With the headlamp design changed, the complete handlebar fairing has been changed as well. You also get a chrome strip running around the front apron of the scooter. The Piaggio badge on the front is now mounted on a vertical chrome slat, and you have a redesigned horn casing below that. Front mudguard has a gloss black ornament with ‘S’ badging. Instrument cluster has a gloss black plastic cover with small wind deflector like design on top. It has the speedometer on the LHS and a fuel gauge on the right. Below, you have a couple of tell-tale lights and the digital clock. Analogue odometer on a ~ R.s 90,000 scooter looks bad. The clock on the instrument cluster stays on even after you turn off the scooter creating curiosity in the minds of those passing by, and touching the buttons next to it, which changes the clock settings. Handlebar grips have Vespa branding and get chrome rings on the inside. 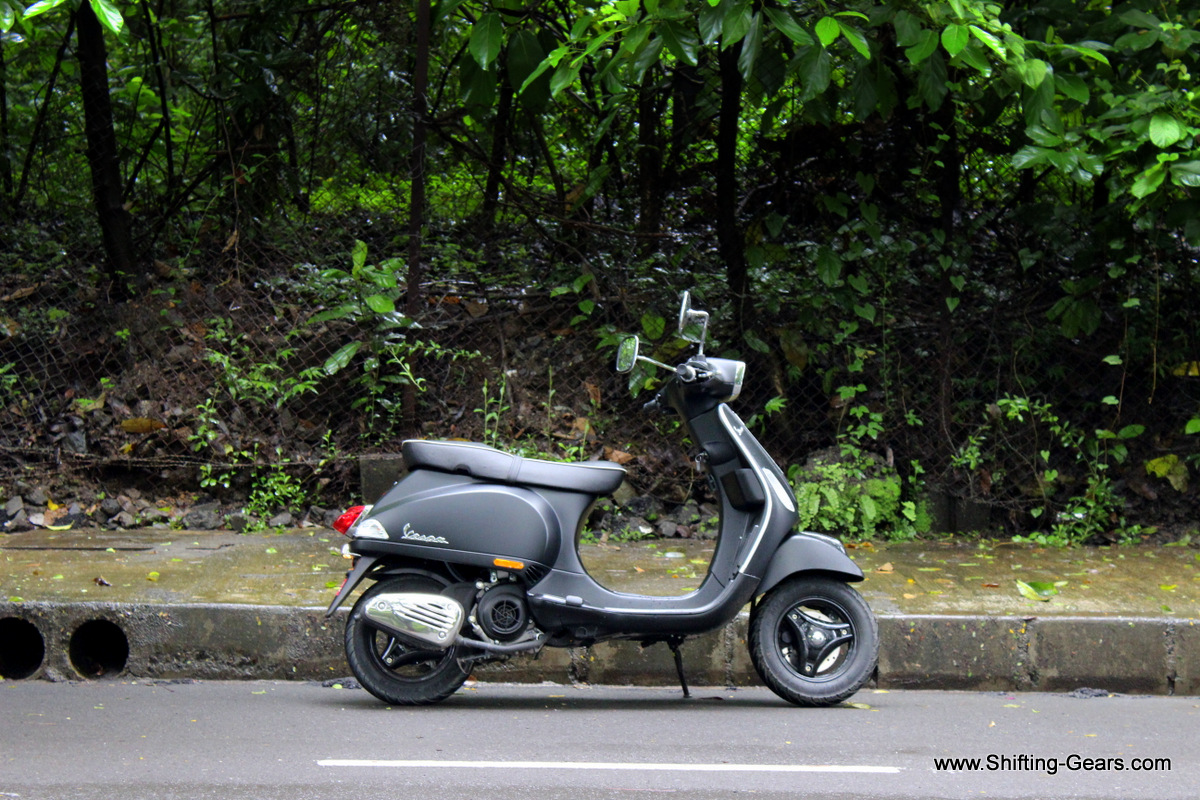 The Vespa S is available in four colours such as orange, white, red and matte black

Below the handlebar, you have the key placed on the RHS. You have two cubby holes on either side, which are not too deep. A covered storage bin would have been ideal rather than this. Expect dust to settle in over here in the long run. The footwell has a ribbed design with rubber beadings. This rubber beading helps in providing grip even during heavy rains. However, keeping these channels clean is a pain. Dust and dirt gets stuck here and cleaning it is a must. Seat is soft and very comfortable. The flat design provides decent comfort, even for those on the heavier side. On the Vespa S, you get contrast stitching in white. Too add to the sporty character, a very useful feature has been missed here. The pillion grab rail is missing and hence, the pillion needs to hold on to the rider for assurance. On the RHS of the seat however, you have a small cut-out which can be used (with two fingers) as assist grip (along with a strap on the seat). Under the seat, you have voluminous cargo space and can also accommodate your medium sized, full-face helmet easily. The fuel filler is also placed under the seat. The scooter gets three-spoke wheel rims painted in black. At the back, on either side, to give it a contrasting look, the exhaust can heat shield is in chrome and the CVT gearbox is seen in silver. On either side, you also get an amber reflector to provide better lateral visibility at night. At the back, you have the tail lamp similar to other Vespa variants with a chrome surround. Clear lens turn indicators on either side, a Vespa S badge on top of the tail lamp wrap up the looks department. One fine detail though, the mount for the pillion grab rail now gets chrome rivets. 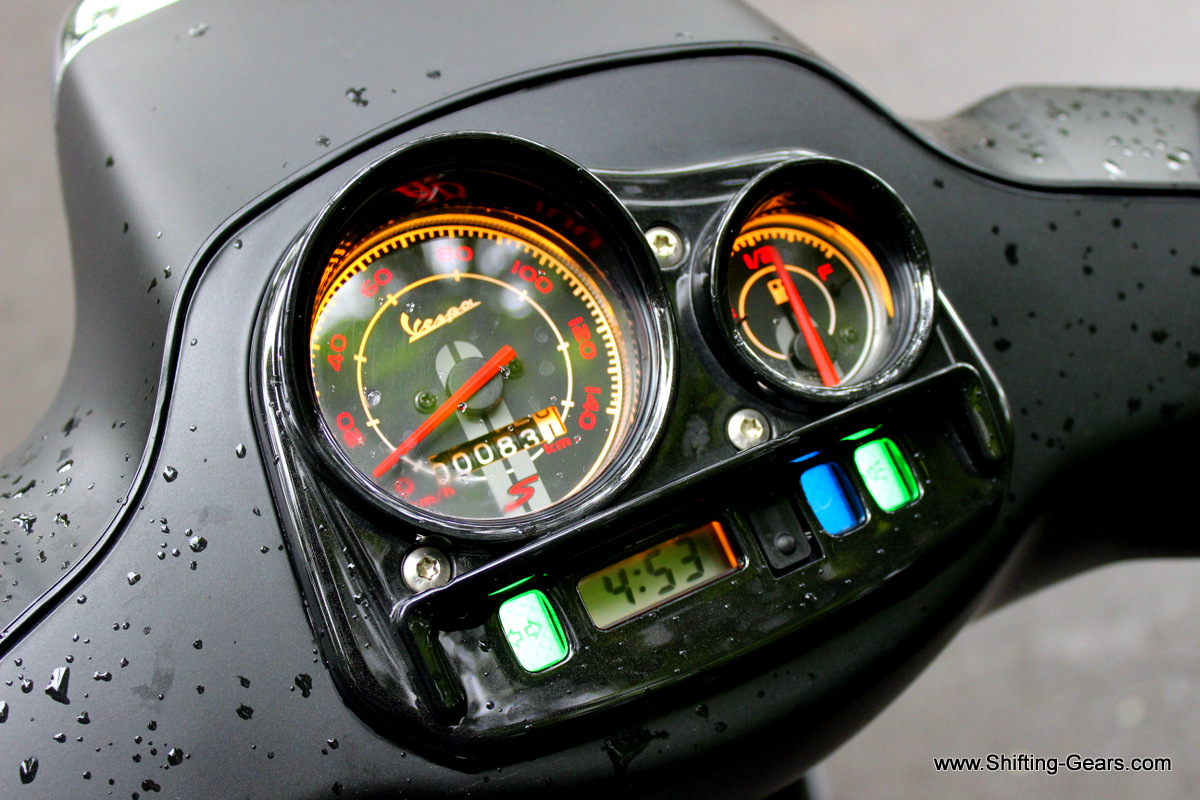 Instrument cluster gets gloss black plastic on top with a small wind deflector like design. Backlit in orange, this unit displays time, fuel gauge, speedometer and analogue odometer with a couple of tell-tale lights

Engine, performance and handling:
All the Vespa variants are powered by the same 125cc, 3-valve, air-cooled, carburetted engine producing 10.06 PS of power @ 7,500 RPM and 10.6 Nm of torque @ 7,500 RPM. Mated to a CVT gearbox, the vibe-free motor works well in the city and also while cruising on the highway. Power delivery is acceptable by scooter standards and its starts lugging comfortably from a standstill. With a good amount of torque available in in the lower revv band, the mid-range acceleration will keep customers happy. However, at this price point, you might come to expect a little more punch. With the highest power output in the scooter segment, the Vespa S manages to touch triple digit speeds. Exhaust note while twisting your wrist is typical of scooters and nothing to write home about.

Built around the monocoque steel chassis, the Vespa is expected to provide a balanced ride with good structural rigidity and better longevity. However, in terms of dynamics, the Vespa is nothing but ordinary. It gets a single side arm hydraulic front suspension and a dual-effect hydraulic rear shock absorber. These units provide soft and comfortable ride quality in the city, but on the highway, you would expect something a little more on the stiffer side. If you’re buying the Vespa for basic errands within the city, sure, it would not bother you. But if you’re buying this to have some fun, or say to zoom around to your college, the suspension might let you down a little. Apart from this, the handling department gets a good score. Light handling manners coupled with grippy MRF tyres on the 10″ rims give you enough confidence to take a corner. 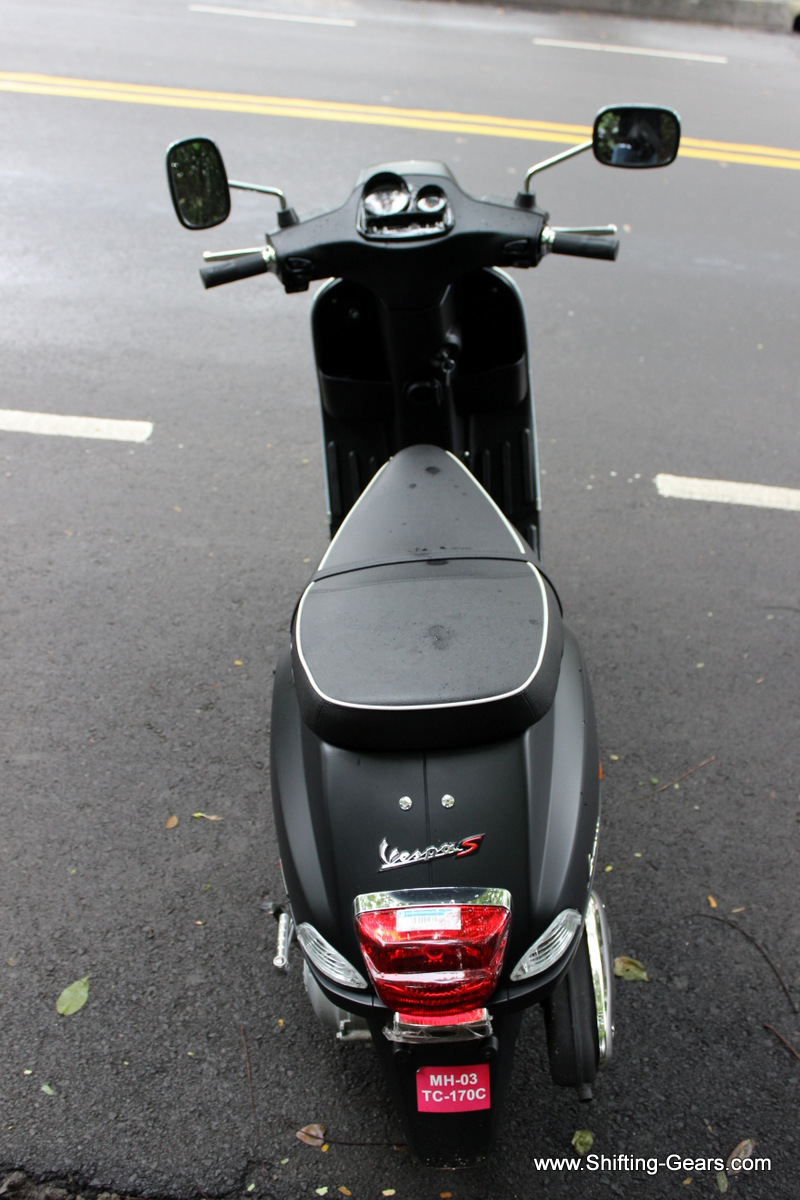 As of date, there are a total of four Vespa variants for sale in India – Vespa, Vespa VX, Vespa S and Vespa Esclusivo

The Vespa S gets a drum brake at the back and a disc brake setup at the front. The brake bite on the front disc was a little lazy. It did give us a progressive feedback on the lever, but the stopping power was less than adequate. Since our test scooter was just 80 kms old, we guess the brake bite would improve with some brake-pad wear in a few 100 kms. For a scooter priced so high, we missed two things in particular which the competition has started offering in their high end products. One, the brake lock clamp which helps to stay in place on inclined surfaces and two, the convenience of combi-brakes. 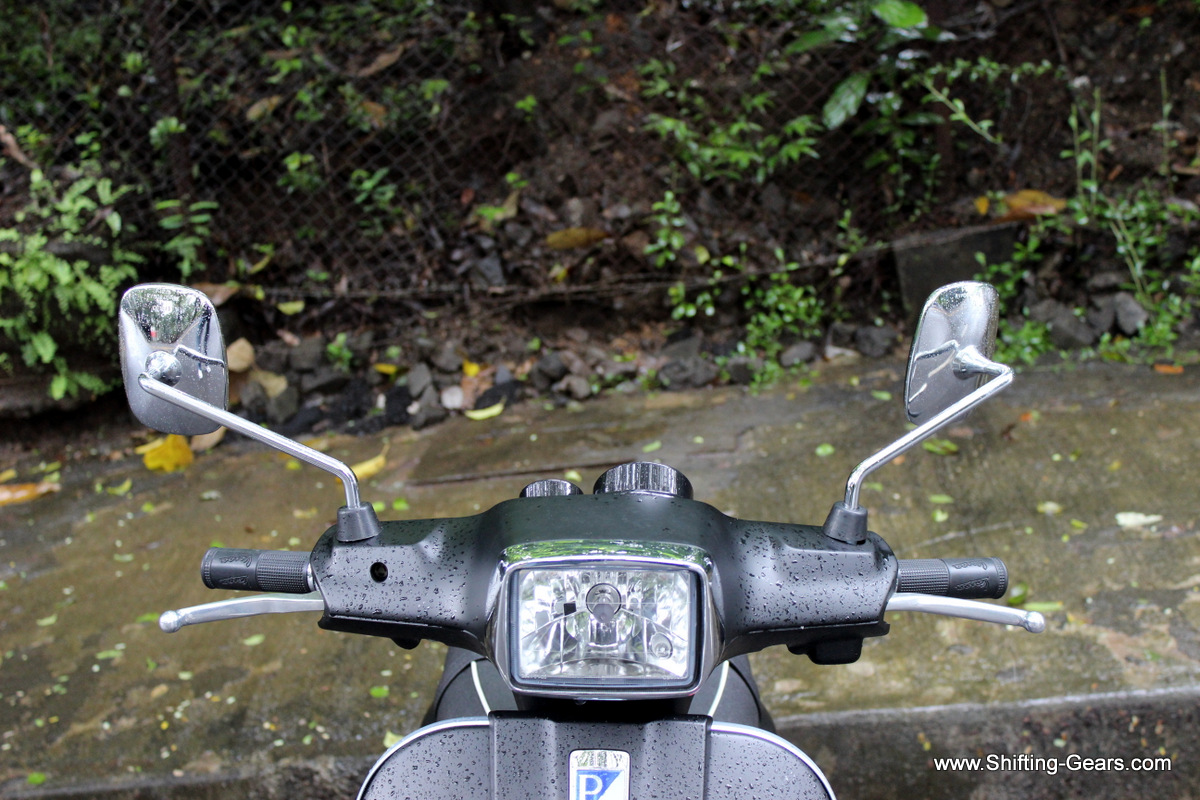 Handlebar is placed at the sweet spot and won’t be an issue even with the taller riders. A major grouse when two on board will be the missing footpegs for the pillion rider. The Vespa allows the pillion to rest his foot in the rider footwell at the extreme end. Because of this, the every time you are at a signal, the possibility of the pillion feet touching yours is unavoidable. The scooter provides a stress free city ride, with the ability to zoom past traffic with its punchy mid-range acceleration.

The Vespa S is no different than any other scooter on offer in India. Yes, it has too much history tagging along, but that’s about it. It looks unique but has no other USP which goes to justify the price tag. A monocoque chassis you might say, but hey, how many people in the market bother about it? If you want something snazzy parked in your garage, with glossy and eye-catching paint jobs, the Vespa is for you. It grabs attention easily. However, if your need is to just have a plain Jane scooter to be put to use for basic household needs, there’s plenty of fish in the pond, and cheaper too. And if you thought this is the most expensive scooter your money could buy, wait till Piaggio gets the Vespa 946 in India. Keen to know the price? Approximately Rs. 8 lakh. Sounds overambitious doesn’t it?