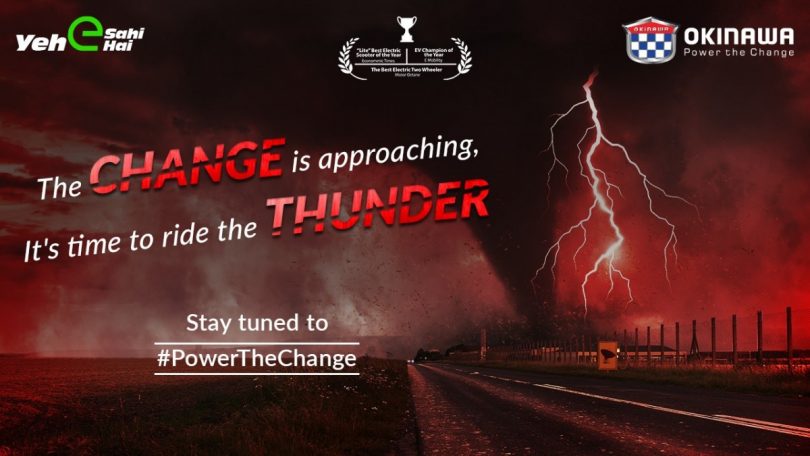 Okinawa, one of the leading electric vehicle manufacturers in the Indian market, has released a new teaser for its upcoming e-two-wheeler. The brand has revealed that the new e-scooter will “Bring Thrill in Life”. Okinawa also states that Global warming is a severe threat to the planet. Therefore, change is crucial to saving the planet, and the change is coming. However, the brand has not revealed any details of the electric scooter yet. But, a silhouette of the upcoming e-scooter leads us to believe that the brand could launch a new electric maxi-scooter.

In the past, spy shots revealed that Okinawa is testing a new electric maxi-scooter in the Indian market. According to spy shots, the electric scooter is in a production-ready state and could be undergoing final evaluation tests. The new electric maxi-scooter is likely to come with a LED DRL mounted on the front apron and LED headlamps. The scooter also appears to come with a wraparound LED taillamps and a large rear fender. Also, the scooter appears to be sporting large alloy wheels, step-up seats and a large footboard for comfort.

The Okinawa electric scooter is likely to come with dual batteries, with one removable and user portable battery pack. The battery pack is likely to achieve a range of around 200 km on a single charge, at least according to speculation. The scooter at a fast charger will also be capable of achieving an 80% state of charge in just 1 hour.