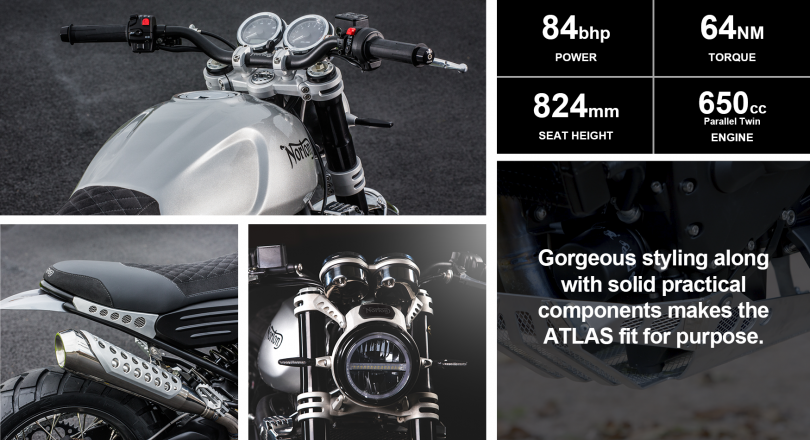 In the recent past, TVS acquired heritage British brand Norton Motorcycles (U.K) in an all-cash deal remuneration of GBP 16 million. Norton Motorcycles U.K was in administration since January 2020 and was acquired through one of the overseas subsidiaries of TVS Motor Company. Norton’s operations are likely to be kept separate from TVS and therefore the brand has created a separate management team. Now the brand has filed patents for six names at the European Union Intellectual Property Office, leading us to believe that the brand could be developing six new models under the new joint venture.

The newly filed patents are – Electra, Fastback, Navigator, Nomad, Ranger and Combat. While the Ranger and Nomad are expected to be the 650cc Twin-Cylinder motorcycles such as the Atlas that makes 84 Bhp of power and 64 Nm of torque, the rest of the motorcycles could be entirely new. It is also important to know that the other names have been used in the past by the heritage motorcycling brand.

The Navigator moniker was used in the 1960s on the 350cc twin-cylinder Norton motorcycle, the Electra was used on the 383cc Norton motorcycle, the Fastback was an iteration of the Norton Command0 750 in the 1970s and the Combat was a new engine that was fitted to the Commando in the year 1972. The patent office has not registered any timeline for the said patents and only the filing date and Nice Classification has been mentioned, which in the case is Class 12, that includes apparatus for locomotion by land, air or water. Furthermore, the Nice Class 12 includes – motors and engines for land vehicles, couplings and transmission components for land vehicles, air cushion vehicles and parts of vehicles.

The patents are likely to be a mix of entry-level and mid-segment motorcycles that could be targeted towards the Indian market. This could be a sign that TVS Motors is gearing up to launch the Norton brand in the Indian market under the new partnership. Is the brand planning to launch retro-classic range of motorcycle in the 350cc segment to rival the current modern-classic crop?