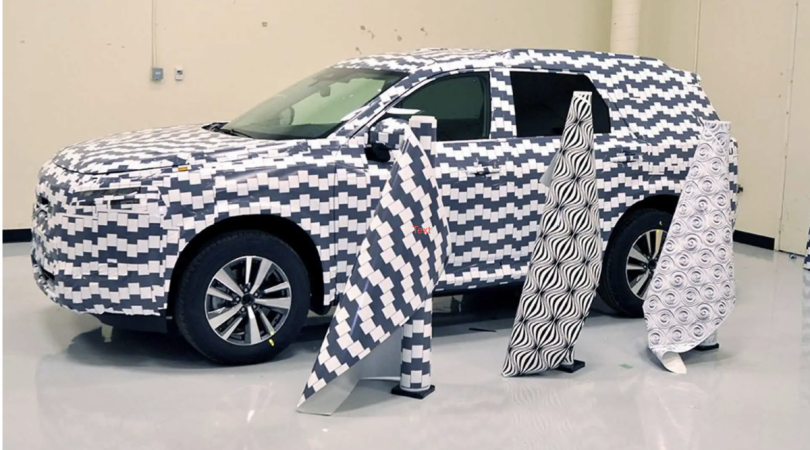 It has been revealed that Nissan has used over 3.2 km of adhesive camouflage in less than a year. This certainly indicates that Nissan is currently testing a lot of cars which are expected to be launched by next year. As per sources, Nissan is planning to launch a total of 10 cars in the next 2 months, in the global market.

Recently, Nissan unveiled the Z Proto in the form of patent photos and the car looks very similar to the concept vehicle. In India as well, there are reports suggesting that Nissan is planning to launch its electric vehicle, Leaf which is expected to hit the roads later this year. A new updated version of the X-Trail is also on the cards and the launch could take place as late as November 2021. Some are even suggesting that Nissan could bring in the Sunny to take on the other sedans in the Indian market.

What is a Camouflage Vehicle?

To answer this question, we first need to know the meaning of camouflage, which Google defines as ‘hiding or disguising the presence of (a person, animal, or object)’. So, in a literal sense camouflage vehicle means a vehicle which is being hidden from the public. The main reason to do this is when the company is not willing to reveal the design and crucial parts of a new vehicle until it has been officially launched. Moreover, if a new car gets spotted before the launch date, there’s no point of organizing any special unveiling event. But, the car needs to be tested in real-world scenarios and thus the company tries to disguise the appearance and also cover the interiors from getting revealed. But, there have been numerous occasions where the secrets of the company got leaked by car spotters and enthusiasts.

There have been multiple instances in India where the new car was spotted being tested under heavy camouflage way before its launch date. There have been cases where images were leaked just outside the manufacturing plants of the respective carmaker suggesting that keeping a camouflaged car without getting clicked by onlookers and car spotters is almost impossible.