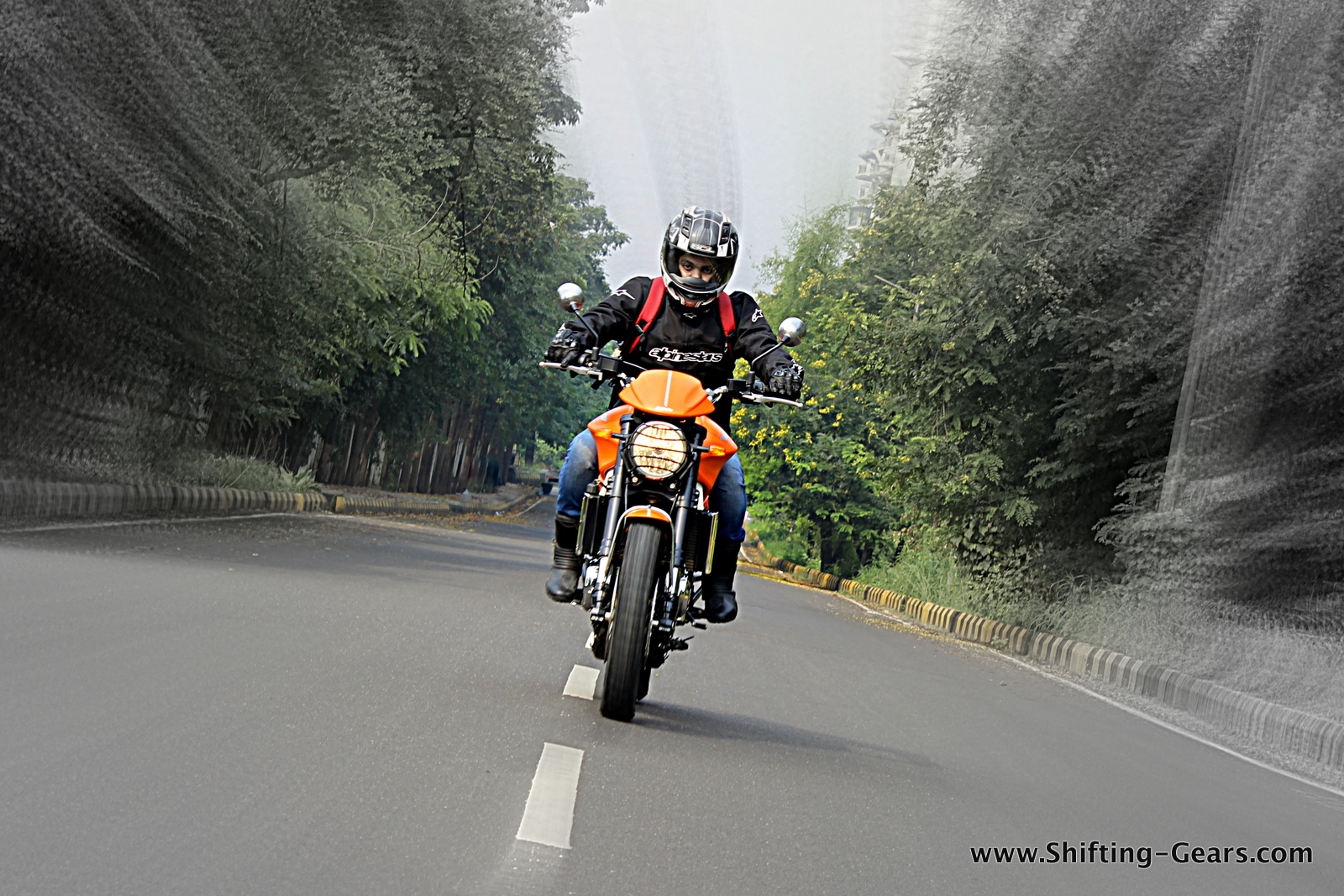 Unveiled at the Indian Auto Expo 2014, Moto Morini is still a brand unknown to the Indian market. Moto Morini is an Italian motorcycle manufacturer and was founded by Alfonso Morini in Bolegna, in 1937. The brand had it’s share of ups and downs since inception and had tied up with companies such as Cagiva in 1987, Texas Pacific Group in 1996 and later in April 1999, the rights for the name were purchased by Morini Franco Motori; a company founded by Morini’s nephew. In late 2010, the Italian two-wheeler manufacturer went into liquidation, but restarted the production of motorcycles in 2012. For it’s Indian operations, Moto Morini has joined hands with one of the ace motorcycle modifier, Vardenchi. Vardenchi Moto Morini will sell and service motorcycles in India, but currently have not started their operations. Bikes will be sold via Vardenchi outlets all across India and stand alone dealerships have not been decided yet. At the Indian Auto Expo 2014, they revealed two motorcycles for the Indian market, which were the Granpasso 1200 and the Scrambler. Suited for dual purpose, these all-terrain motorcycles demand big bucks, for a relatively less known brand in India. So we decided to play around with the cheaper (among the two) Scrambler on the Indian streets, and this is what we have to say… 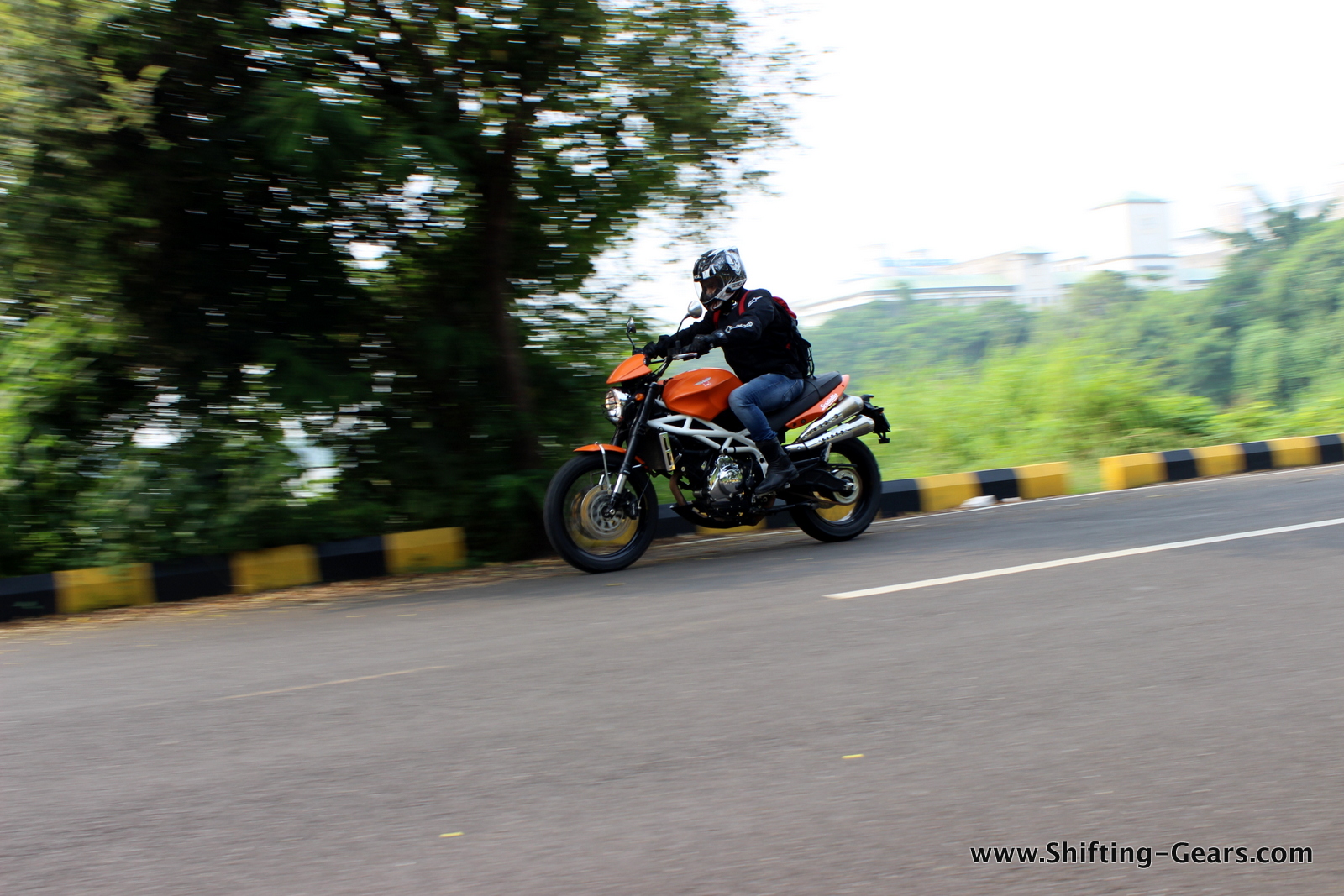 Styling:
One look at the Scrambler and every guy would love the bare bones, yet brute design language. Minimum bodywork, parts which are meant only for business and big dimensions are overwhelming. In terms of looks, the bike has nothing fancy apart from the twin exhaust pipes on the left hand side, under the pillion seat. At the front it has a regular, old-school round headlamp with a black lens protector. This surely adds more muscle to the bike in terms of visual appeal, but also, will serve the purpose when going off-road. Above the headlamp, you get a small fairing (wind-deflector) which covers up the tachometer behind. A small front mudguard is also held with steel bars so that it stays intact during heavy impact. The upside-down Marzocchi front fork is painted in black. The 19″ front wheels use a spoked Excel rim in black and house dual 298mm disc brakes. The knobby tyres again add more appeal to the form as well as function. The Scrambler gets small size, round, chrome rear view mirrors mounted on black stalks and small amber lens turn indicators. The front mudguard and the wind-deflector above the headlamp have a thin chequered flag decal running vertically. Radiator also gets a chrome casing on either side. 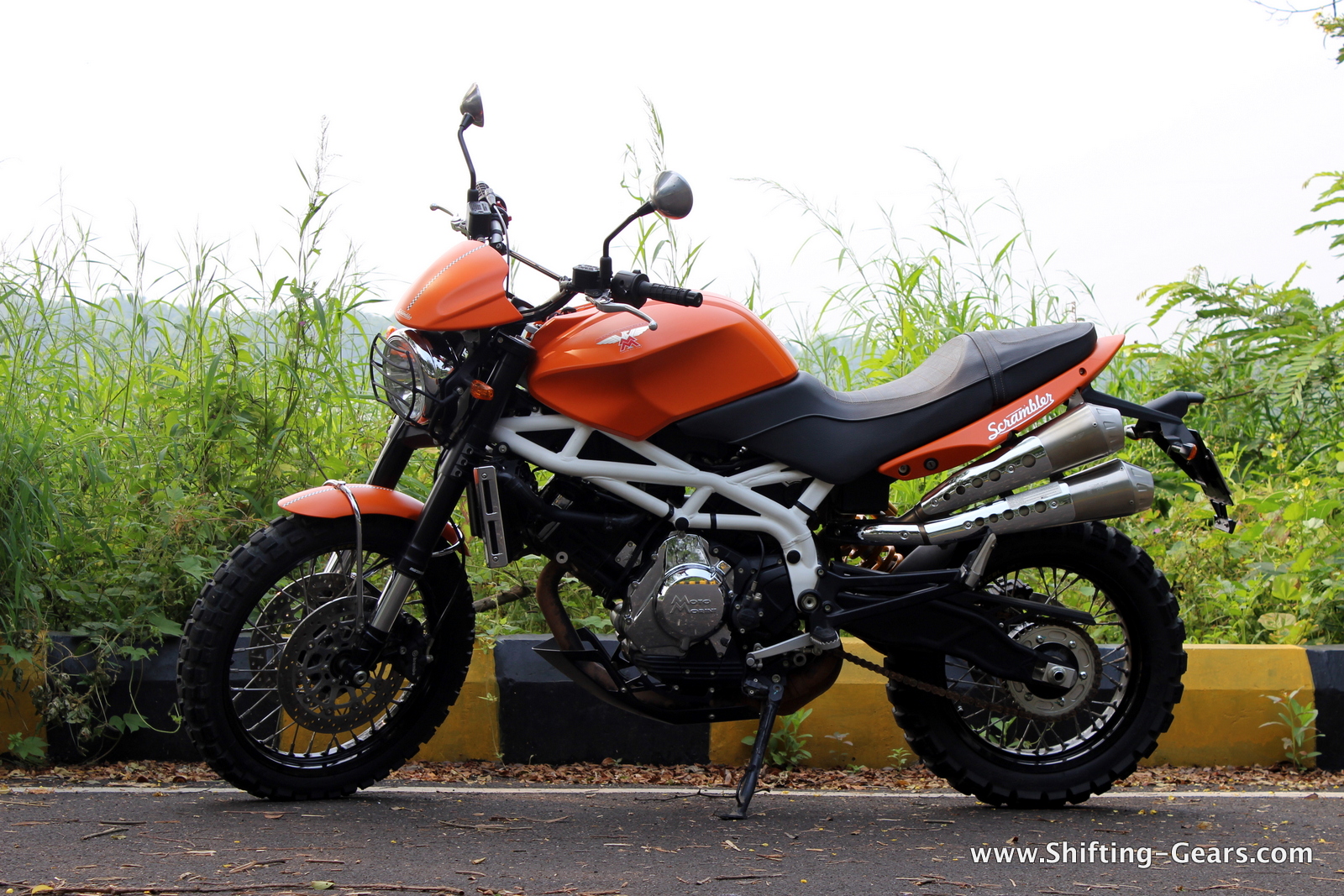 Side profile is massive. The sheer height is a giveaway that the Scrambler is not going to suit all, especially those who are below the 5’8” height. The massive 21 litre fuel tank painted in matte orange is bulky to look at, even when you are riding the motorcycle and looking at the size of this tank between your legs. Another striking design element to be noticed is the exposed tubular Trellis frame which was painted in white on our test bike. Personally, we found the white paint a little cheesy and unnecessary. The Moto Morini website shows that the chassis is also available in black and hopefully customers get to chose the preferred colour here. Below that, the engine cover is seen in chrome too. Seat is long and of the step-up type, but not split which will be offered in three colour options. Exhaust is mounted high, below the pillion seat on the left. The dual mufflers look business too. 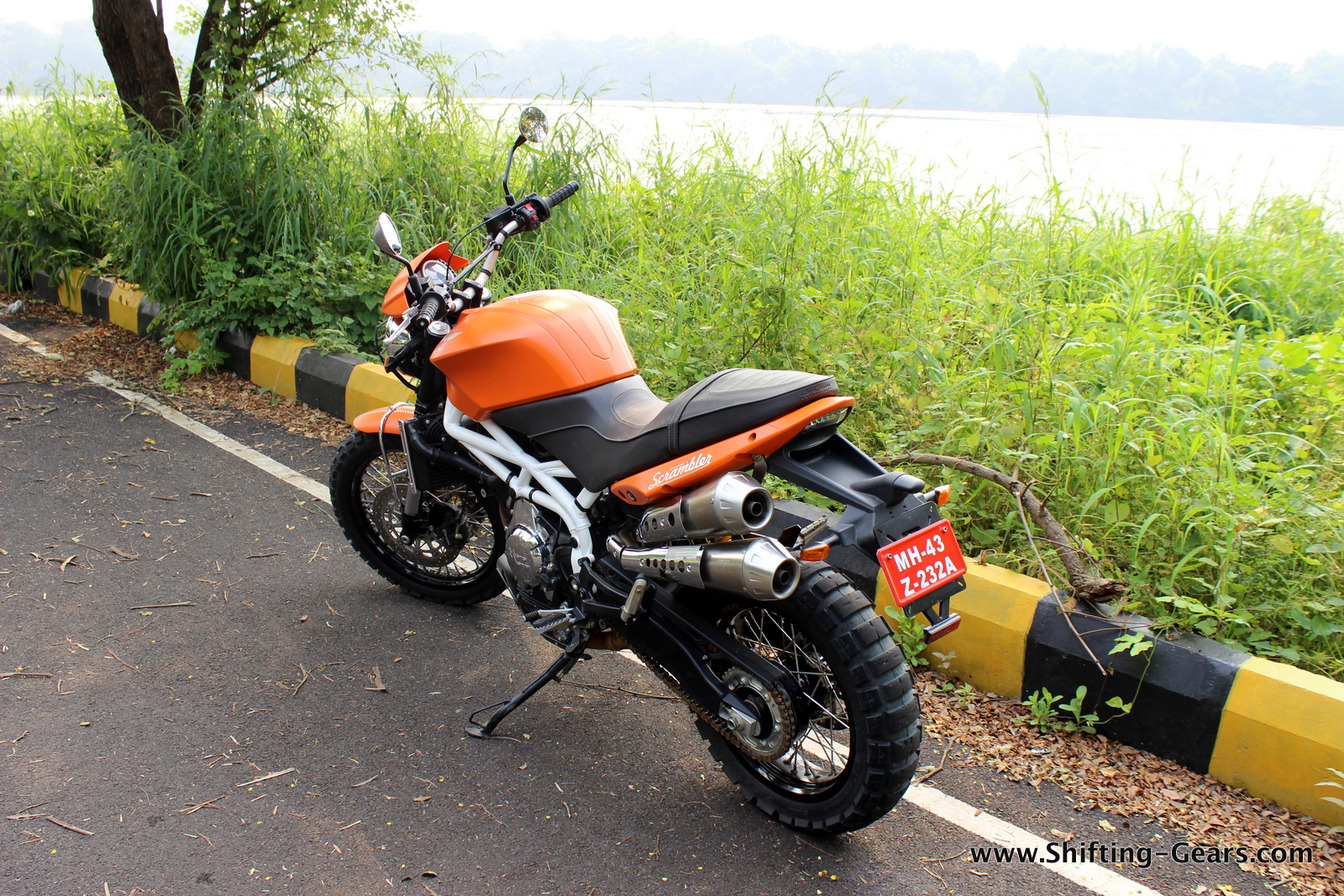 At the back, you have a reasonably long rear mudguard which mounts under the LED tail lamp. Tail lamp is size small and has a clear lens with a chrome panel inside. Turn indicators are identical to those at the front and mounted conventionally on the mudguard. Rear wheel is a 17″ Excel rim with a 150mm knobby tyre. Rear end gets a 255mm single disc brake and the rear Ohlins suspension is side mounted. The rear three quarter view from the LHS looks busy with the dual exhaust pipes covering up the void space between the wheel and the pillion seat. While from the RHS, this gap is clearly visibly. Pillion rider does not get any grab rail, apart from a assist strap on the seat.

Instrumentation and ergonomics:
Instrument cluster is a simple digital + analogue unit. Not that it does not serve the purpose, but looks pretty ordinary for a bike costing upwards of 30 big ones. The RHS has an analogue tachometer revealing the redline starting at 8,500 RPM. To the left, you get a digital display with white backlit. Information provided includes engine temperature, time, speed, odometer, trip-meter, max speed achieved and average fuel efficiency. To the right of the tachometer you have a couple of tell-tale lights stacked up vertically. Keyhole is placed below the handlebar, ahead of the fuel tank. Handlebar is a conventional single piece unit in matte silver paint. It obviously does not get a damper like those on the clip-ons of superbikes, but it gets a small bracket which should add to the rigidity when tackling rocky terrain. 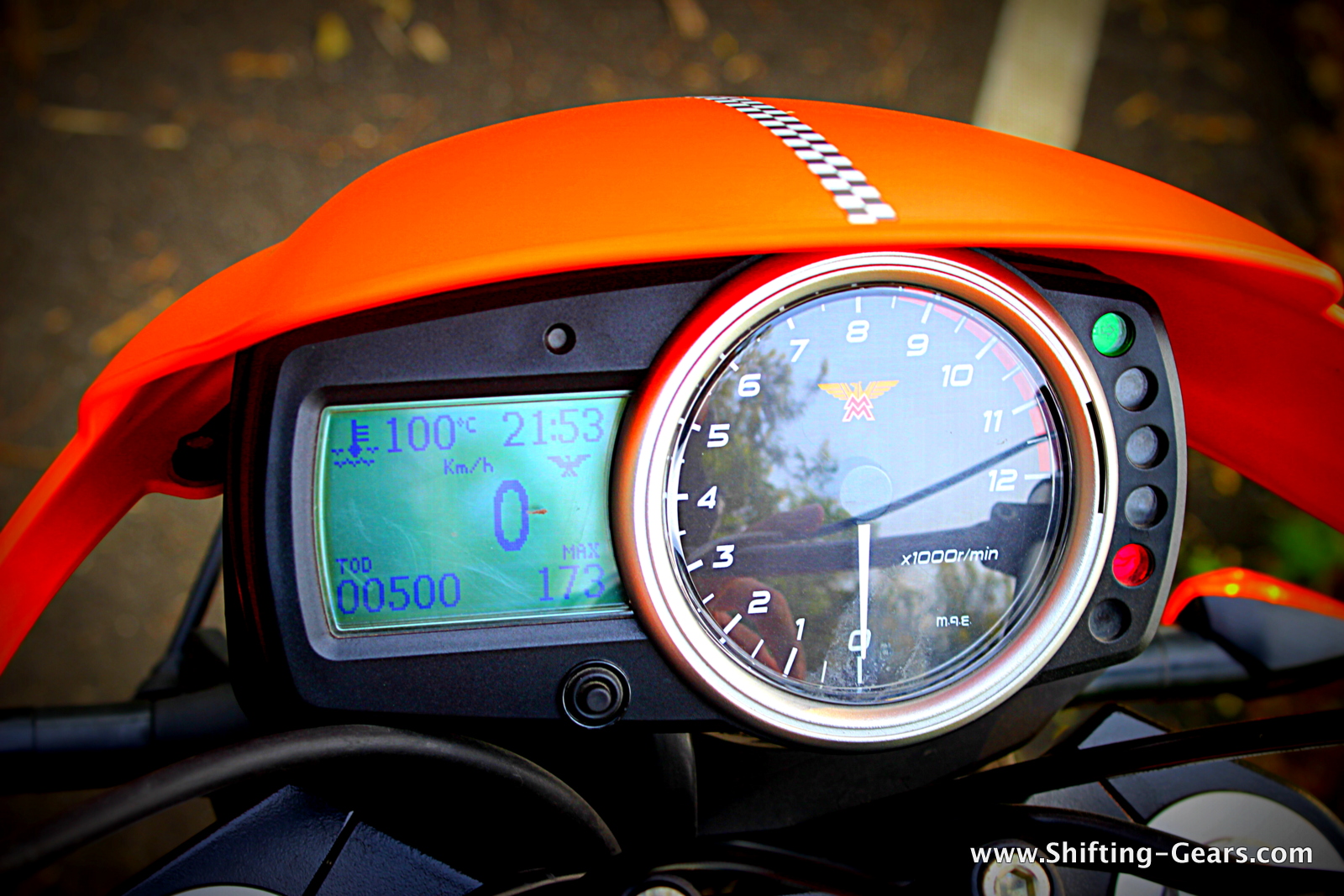 Control switches are placed in reach of your thumb and the plastic quality is acceptable. To the right, you have the electric starter, engine kill switch and a hazard light switch. And to the LHS, you have the usual indicator, horn and headlamp switches. The throttle cable making it’s way from above the control switches looks brilliant, at least to those who love old school motorcycling. Handlebar grips also have a chequered pattern, which sticks on well in place with your gloves. Rear view mirrors are too small to provide a good visual of the action behind. Forged clutch and brake lever travel can also be adjusted.

To hop on the bike, you need to be tall. Make no mistake, if you are anywhere below the 5’8” height scale, the Scrambler is going to be a difficult motorcycle to tame. Seat height is at 830mm for the rider and clears the air that this is not a motorcycle for all. Seat is well contoured and of the medium compound. It will be comfortable during those long rides. Riding position, although this is a all-terrain tourer type of motorcycle, has the rider leaning forward a bit. Those with longer arms will however find the riding position upright. Rear-set foot pegs have a rubberised top and a nice teeth-like pattern. For the pillion, getting on is a climb. One has to make use of the footpeg to get up in place. No grab rail provided forces you to either hold on to the rider, or the useless assist grip on the seat.

Engine, performance and handling:
Powering this big Scrambler is a Bialbero CorsaCota engine which powers almost all of Moto Morini bikes. It is a 87 degree, longitudinal twin-cylinder, liquid cooled, 4 valves per cylinder engine producing 117 BHP of power @ 8,500 RPM and 105 Nm of torque @ 7,000 RPM. Engine gets dual overhead camshafts with one-piece central sump and dual throttle bodies. Engine is mated to a 6-speed gearbox. Let us first mention this, the Scrambler does not get any electronic aid. No traction control, no ABS, nothing. It is pure motorcycling madness with the big dimensions and a big torquey motor. Of course, for the price, it does not do justice. And for a motorcycle producing over 100 horses, it is good to have optional electronic aids to help the newbie riders. 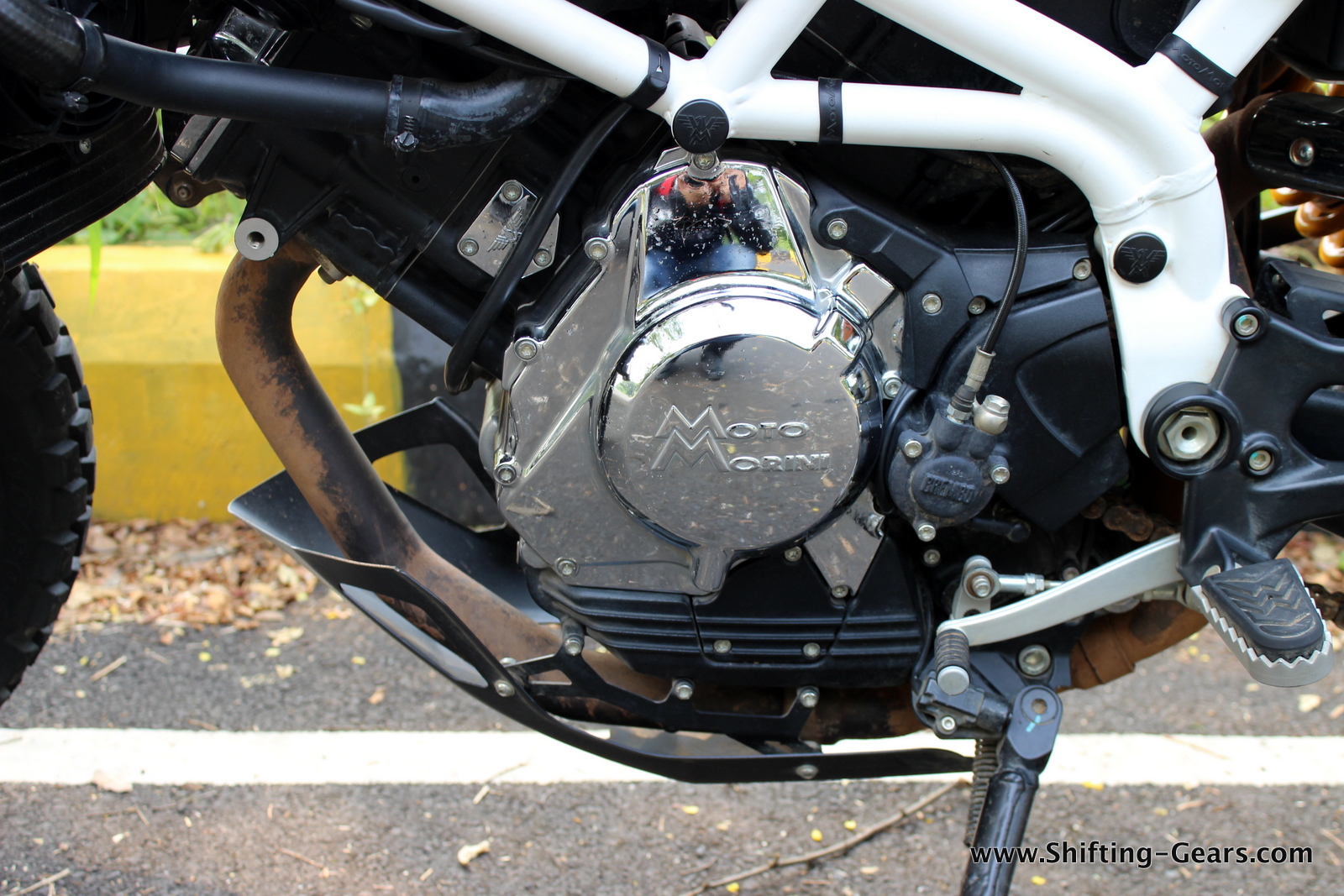 Push the starter button and the engine cranks up with a throaty exhaust note. Even at idle (or at start-up), the exhaust note is nice and gruff and suits the bikes brute appeal. There is a noticeable amount of vibration felt on the handlebar and on the footpegs when at idle. However, the vibrations are not visible say for example with moving handlebar etc. Slot it in first and you hear a old-school metallic sound. Simply release the clutch and the bike potters around easily. We do not recommend lugging the engine, but the bike can make decent progress from standstill without any throttle input. Although moving ahead won’t be a pain, backing up the bike will be. The bike weighs a massive 200 kg without fuel and making your way around city traffic isn’t as easy as you would like it to be. Engine heats up a fair amount and maintains it’s temperature over 90 degress at all times when on the move. Hit 98 degress and the radiator comes into play. Heat is felt on the riders feet at a red light, and there is no solution to this; as is the case with any superbike being used in Indian conditions. Low end torque although abundant, you need to make constant gearshits in the city. Reason? The jerky ride because of the torque reaction from the crank.

Hit the highway and wring the throttle, the bike accelerates just as any other superbike would. It isn’t as quick off the line compared to other track focused motorcycles, but knowing the weight and size of the Scrambler, it is FAST. Triple digit speeds are achieved with ease and the bike feels comfortable up top. One downside though, when accelerating and pushing hard, the front end feels a little loose. That coupled with no electronic aids, makes you a little cautious while wringing the throttle wide open. Where straight line performance will surely leave a wide grin on your face, don’t even think the Scrambler would allow you to carve corners and go knee down. It has a high centre of gravity, but flicking the bike around corners is not an easy task. And the bike is not even meant to do this. 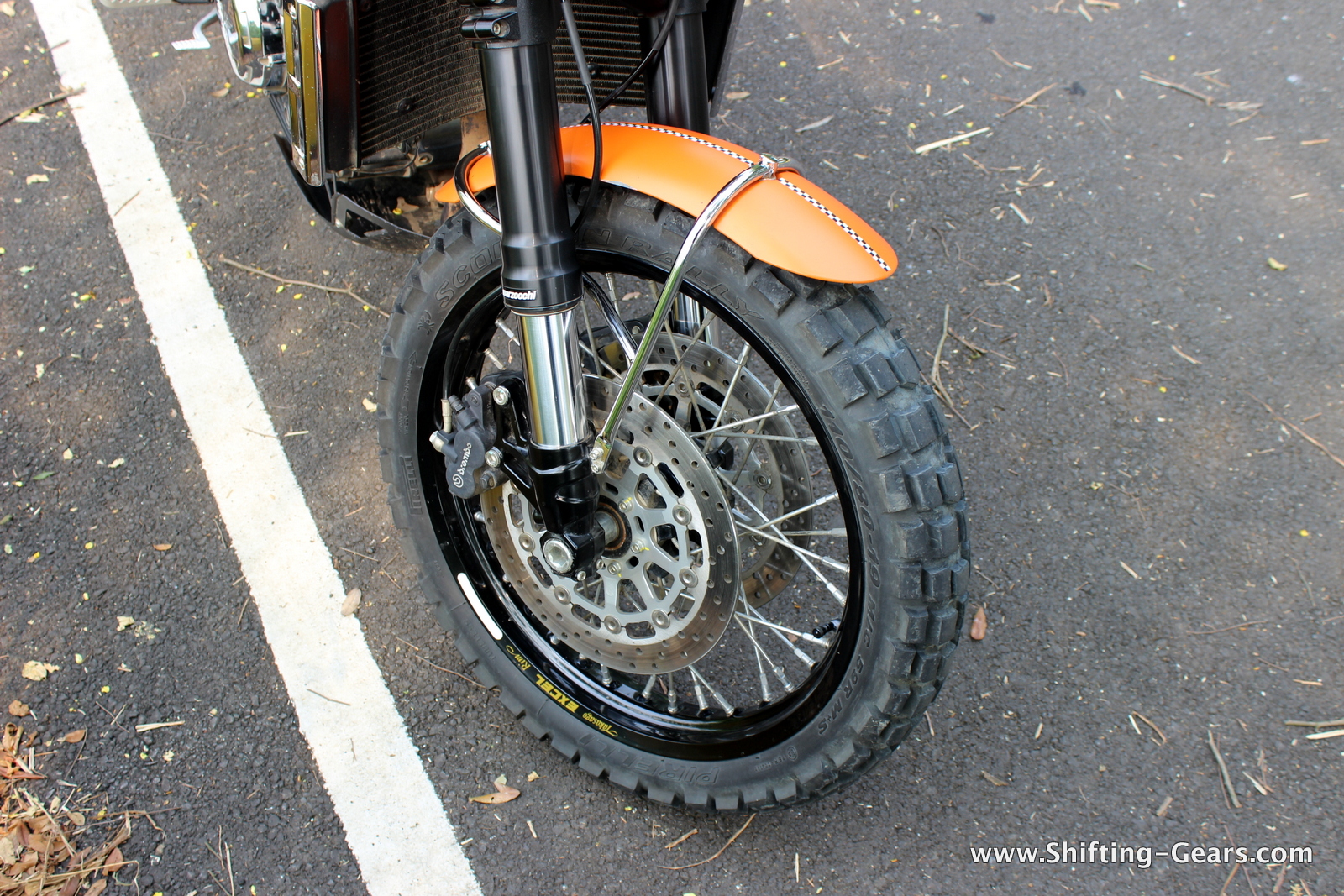 We went through a couple of rocky and broken roads, and we must agree, the bike works brilliantly over here. 180mm of ground clearance allows you to simply glide over less than perfect roads. If the road is absolutely bad, and you are scared to let those jerks to be felt on your back; simply stand up and the Scrambler will get things done. The knobby tyres help in these situations by providing excellent grip on gravel as well as rocks. Suspension setup was a little stiff during out ride, but the Ohlins monoshock offers adjustable setup for your taste; be it soft of stiff. With the hydroformed swingarm, you don’t need to worry about the bikes ability to handle those nasty bumps either.

Braking performance is adequate and nothing more. With 117 horses pushing you forward, the brake bite although adequate, craves for an ABS. You just cannot kick the brake pedal on high speeds because you have to account for locking up. Also, the knobby tyres might work on rough terrain, but they are slightly against the braking performance. With broken contact patch, you can literally feel what the tyres are up to under braking, and it is not confidence inspiring.

So who should buy the Scrambler? Definitely someone who has big bucks. Also, someone who loves hardcore, old-school motorcycling without any electronic aids. The bike looks handsome and will surely attract the male audience with ease. Road presence is massive and turning eye-balls is an easy task when on the Scrambler. But does it justify the price tag of approximately Rs. 33 lakh on-road? We really don’t think so. Yes, the import duties take the cost much higher than it actually should be, but there are other big guns from BMW which at a similar price point, provide you a widely known brand and much useful electronics. It all comes down to personal preference then. During our ride, we really loved the uninterrupted power delivery which was directly proportional to our throttle input. The Scrambler is a pure testosterone booster on wheels.