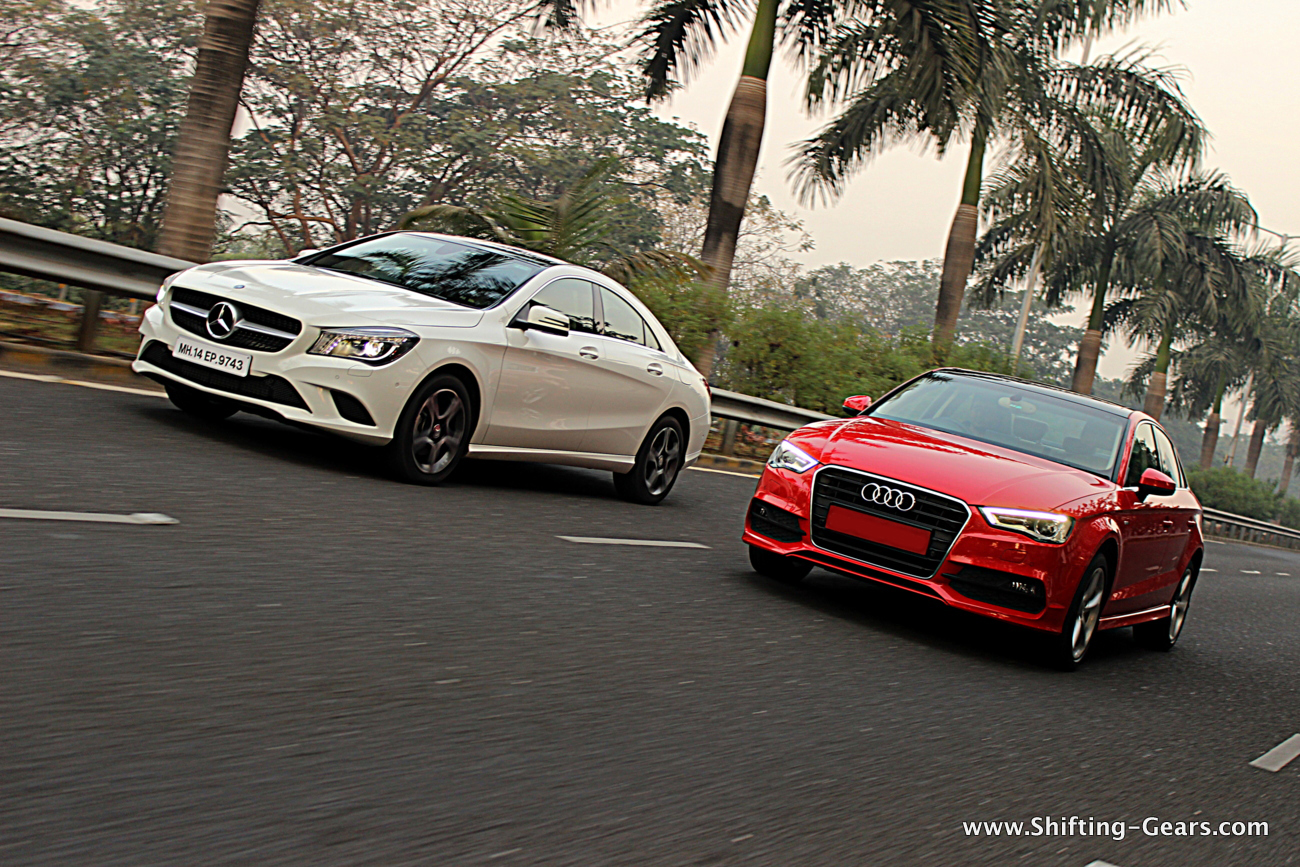 A year back, if you were looking at buying an entry-level German luxury car, you only had the option of spending up to three million rupees, and bring home a small car. This, actually didn’t go well with the Indian customers’ direct comparison of price to size. Come 2014, the game changed entirely. Audi launched the A3 in a sedan guise blowing away hatchback competition such as the BMW 1-Series & Mercedes-Benz A-Class. Audi enjoyed the first mover advantage and managed to clinch the #1 spot in India backed by the strong sales performance brought in by the A3. But now, Mercedes-Benz has brought in a new contender in the segment, the CLA-Class sedan. In 2015, its going to be a tough fight between Audi & Mercedes to generate volumes in this segment while BMW can only watch from the sidelines. In 2014, Mercedes-Benz already closed-in on Audi by a considerable margin and this year, backed by the cheaper CLA, chances are Mercedes-Benz jumps to the #1 spot in India.

Both brands have however pulled off a clever strategy of bringing in new products, which are smaller & less equipped at a price at which their bigger siblings were available sometime back. The A3 pushes the A4 & the CLA pushes the C-Class a segment above. Being front-wheel driven, both these cars relatively fall short in the dynamics department as well, but are not shy of demanding the same price. Can the Mercedes-Benz CLA-Class take the game in its own hand in the compact luxury segment? Does the Audi A3 have what it takes to dodge the CLA? We took both the cars out for a spin on a cold Sunday morning to find out… 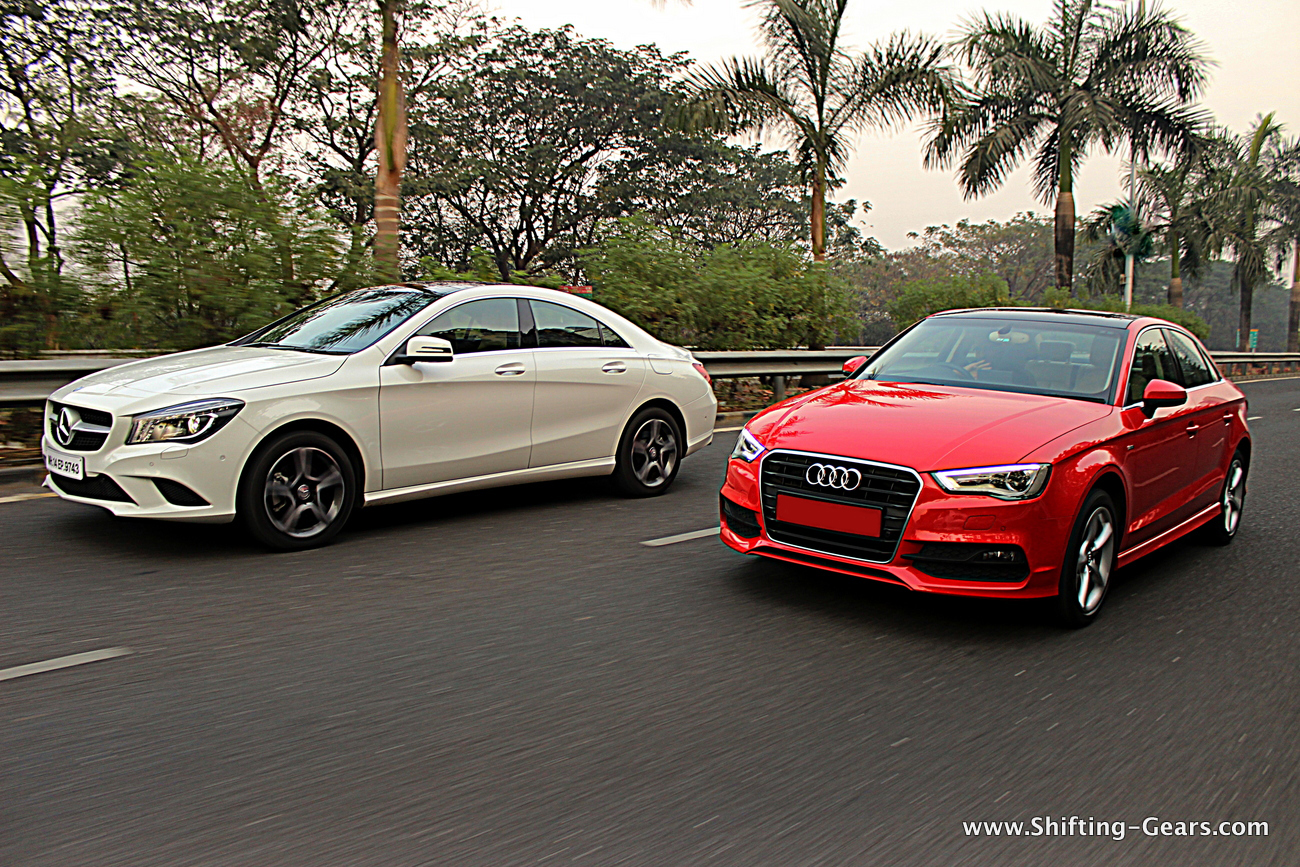 While the A3 has clean understated lines, the CLA looks absolutely smashing in the coupe-like exterior profile

Exteriors:
Styling is key in this segment. It is a given that entry-level cars aren’t going to be big on dynamics or space compared to their bigger siblings, but then, looks can do the trick. A good looking car is half the job done to convert an enquiry into sale.

Both cars are miles apart in the looks department. While the Audi plays it conservative with clean & flat lines, the CLA is flamboyant and wants to make an impression at first glance itself. When you look at the A3, it resembles the bigger A4, A6 and the likes. The design language it typical of Audi and although a bit understated, the design is timeless and will surely pass the test of time. But then, to some, it might look pain Jane. There is nothing new that the A3 brings in to charm the first time buyer of a German luxury car brand. This is where the CLA takes home the piece of cake. Making quite an impression with the coupe-like exterior profile, it suits the purpose of owning a poser. Yes, the front end might be similar to the A-Class, but then, the A-Class is quite a looker by itself. Swooping crease lines and the sloping roof integrating well with the curvaceous boot adds a lot more funk. Not to forget the fantastic looking tail lamp setup on the CLA which will not be mistaken for anything else. And to blow away the A3, the CLA comes with frameless doors. This can surely be a selling point for someone who is looking for form over function. If you ask us, if we were spending upwards of Rs. 40 lakh on a luxury sedan, we would buy the CLA-Class without any doubt. Its a sure shot head turner and the A3 cannot hold a candle in the looks department. And if you need numbers, the CLA is a good 174mm longer than the A3. 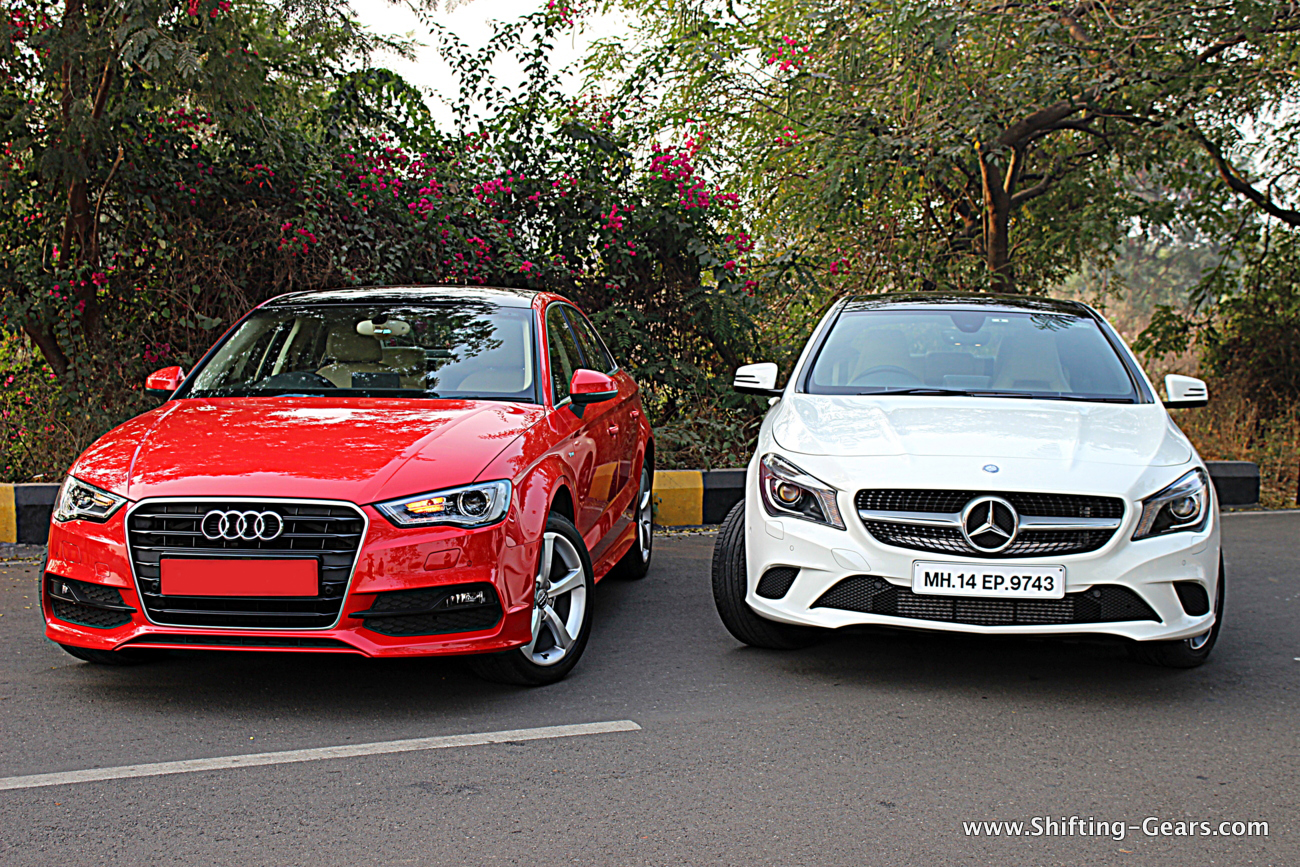 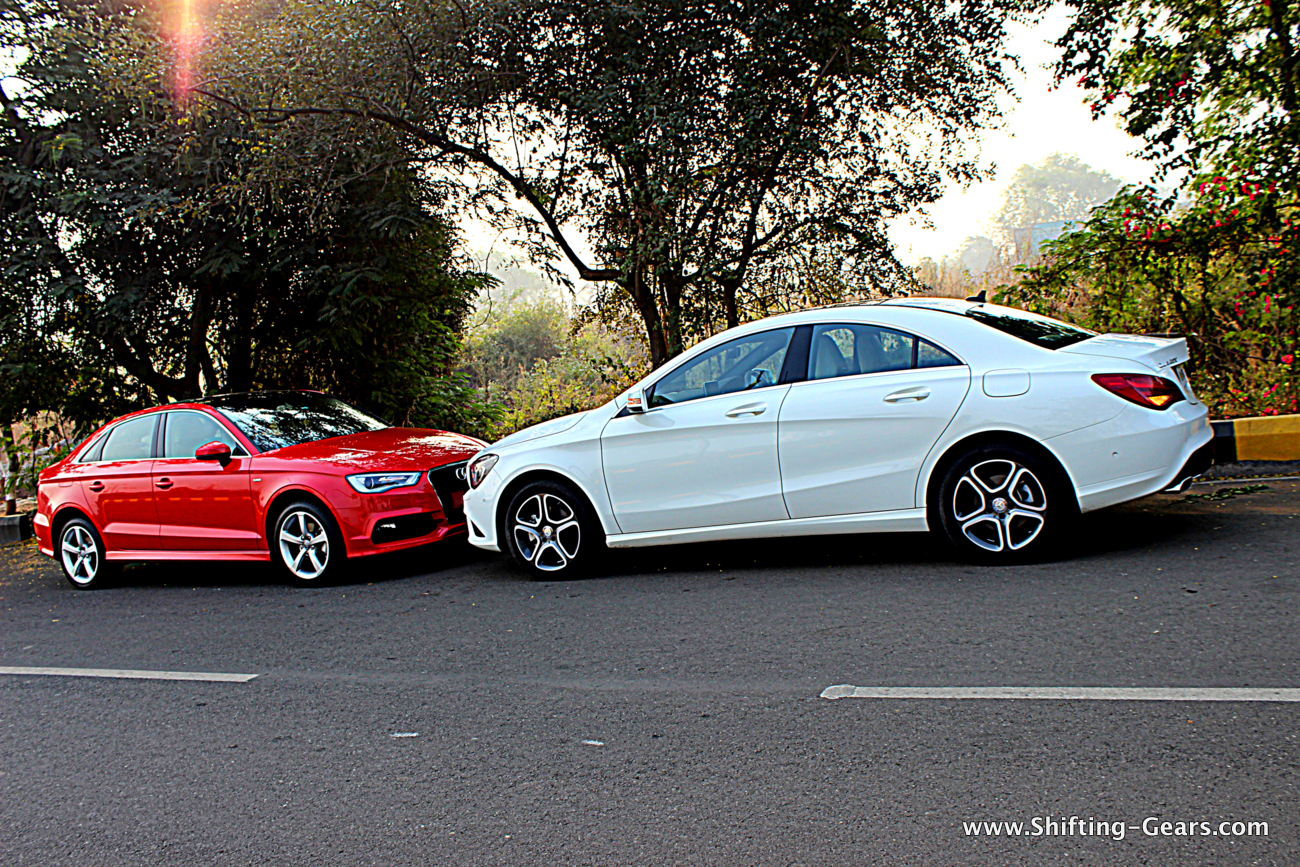 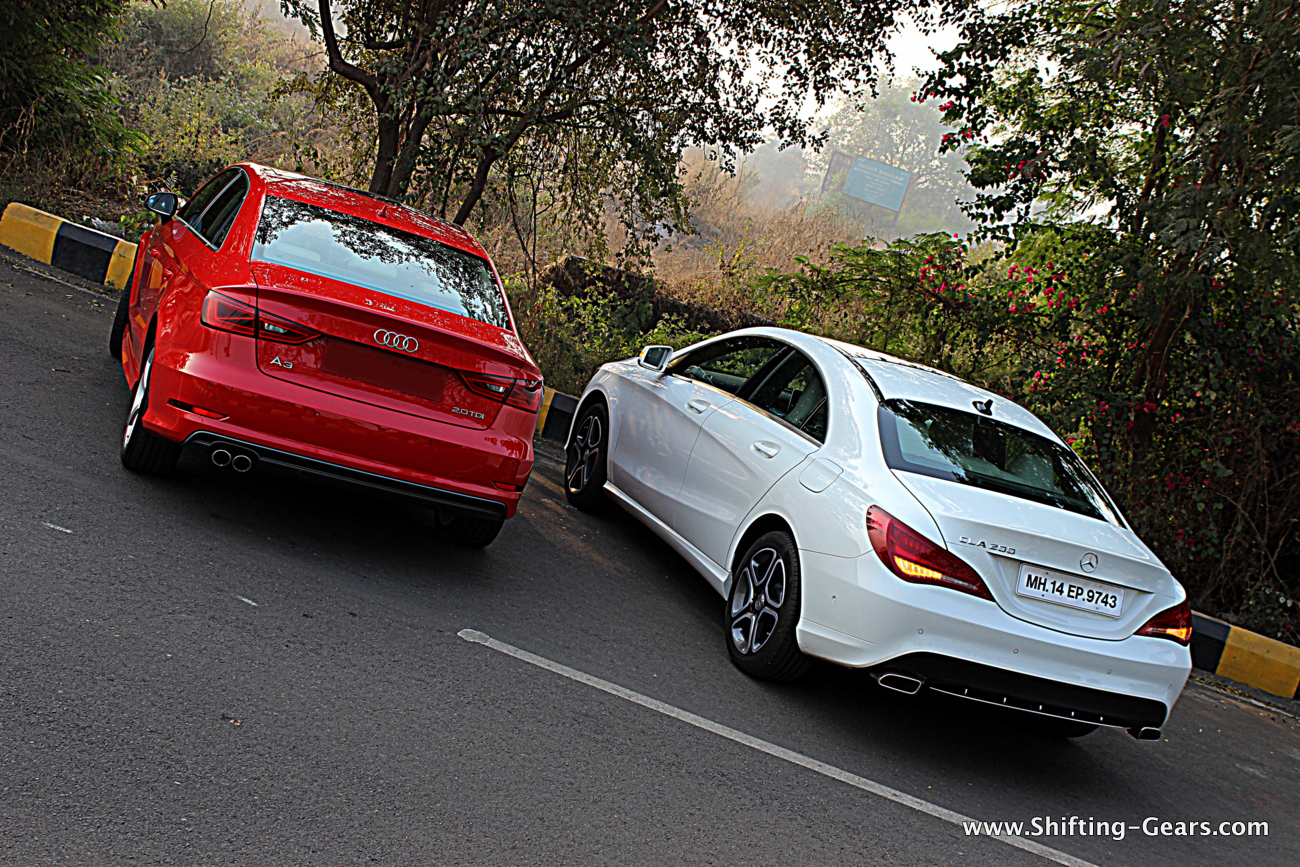 Interiors:
While buying a German luxury car, its a given that the car will pamper you on the inside. And same is the case with both these cars. Top quality materials, top notch fit and finish make the interiors look very premium. Soft touch panels also add a lot to the feel good factor inside the A3 & CLA. Leave the doors of both the cars open and the CLA with its frameless doors gathers most attention.

Step inside the A3, and you will notice that the dashboard is rather empty, and small. This is primarily because the stereo console is completely absent on the dashboard and has a couple of buttons placed behind the gear lever instead. While this might be a bit more ergonomic, it makes the dashboard look a lot – cut-price. Steering wheel on the A3 resembles plenty of other cars from the VAG group and loses out on the wow factor. The only thing funky in the A3 is the pop-up infotainment screen on the dashboard. You can pop it up or down at any time during the drive. Circular AC vents are good in the touch & feel department. 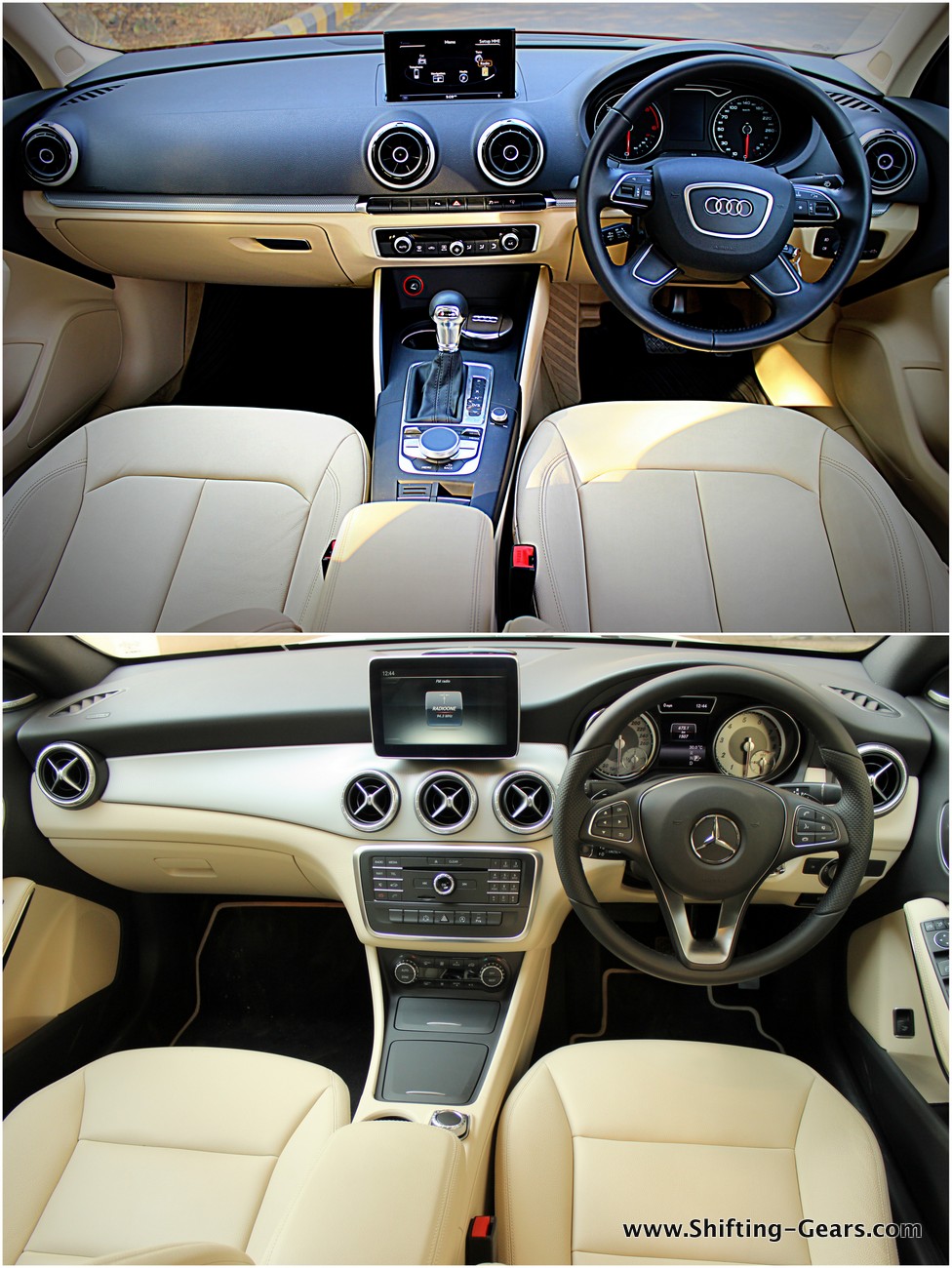 Inside the CLA, the full size dashboard covers up the front end of the cabin well. One on one, the dashboard of the CLA suits the price much better. The most striking design element here are the 3 AC vents in the centre which look rather sporty. Unlike the A3, the CLA gets a full size stere0 head unit and a infotainment screen on top. The 3-spoke steering wheel gets contours for your thumb and also, the very important paddle shifts which the A3 misses out on. Not that these cars offer that much fun with the paddles, but at least Mercedes offers them. The steering column mounted gear lever releases a lot of storage space in the centre.

The A3 gets a 10-speaker Audi stereo system while the CLA gets a 12-speaker Harman Kardon Logic 7 system which sounds better amongst the two. Both cars get a 7″ MMI screen but the one on the A3 is a touchscreen unit with handwriting recognition.

Front seats on both the cars offer decent all-round support to the driver at all times. Also, electric adjustment offered on both the front seats on both cars does add to the premium feel. Mercedes goes a step forward and adds memory function to the electric seats while Audi only offers adjustment buttons. Seating position on the CLA-Class however is a notch better since you sit nice and low. On the A3, even on the lowest seat adjustment, the position was too high for our taste. Both the cars are compact in size and it shows on the rear seats. While legroom is available in moderate quantity, both cars lack headroom and under thigh support. The CLA however offers more space with its 62mm longer wheelbase. Not that this can make or break a deal though. Both these cars shine in the front cabin department more than their rear. 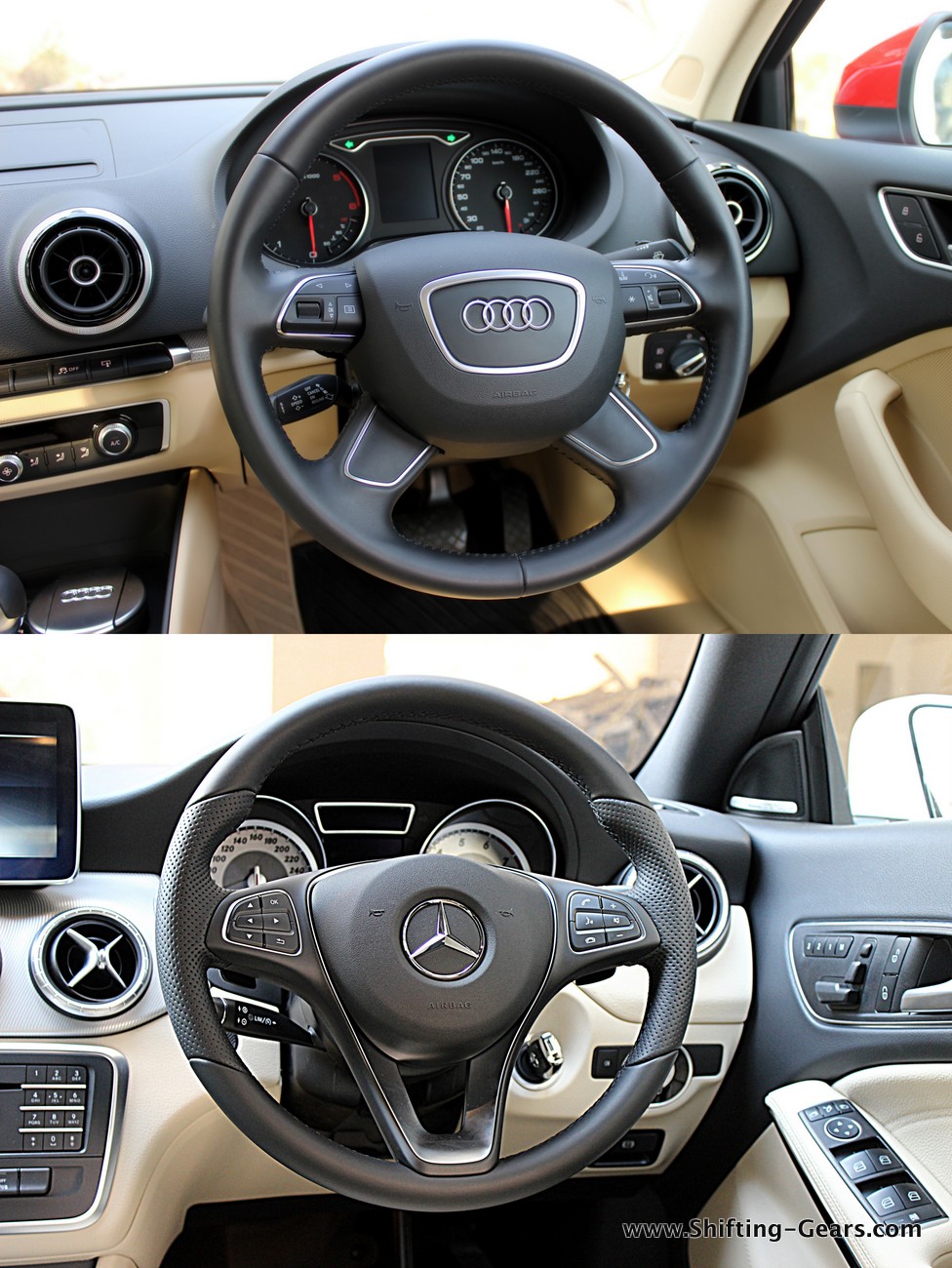 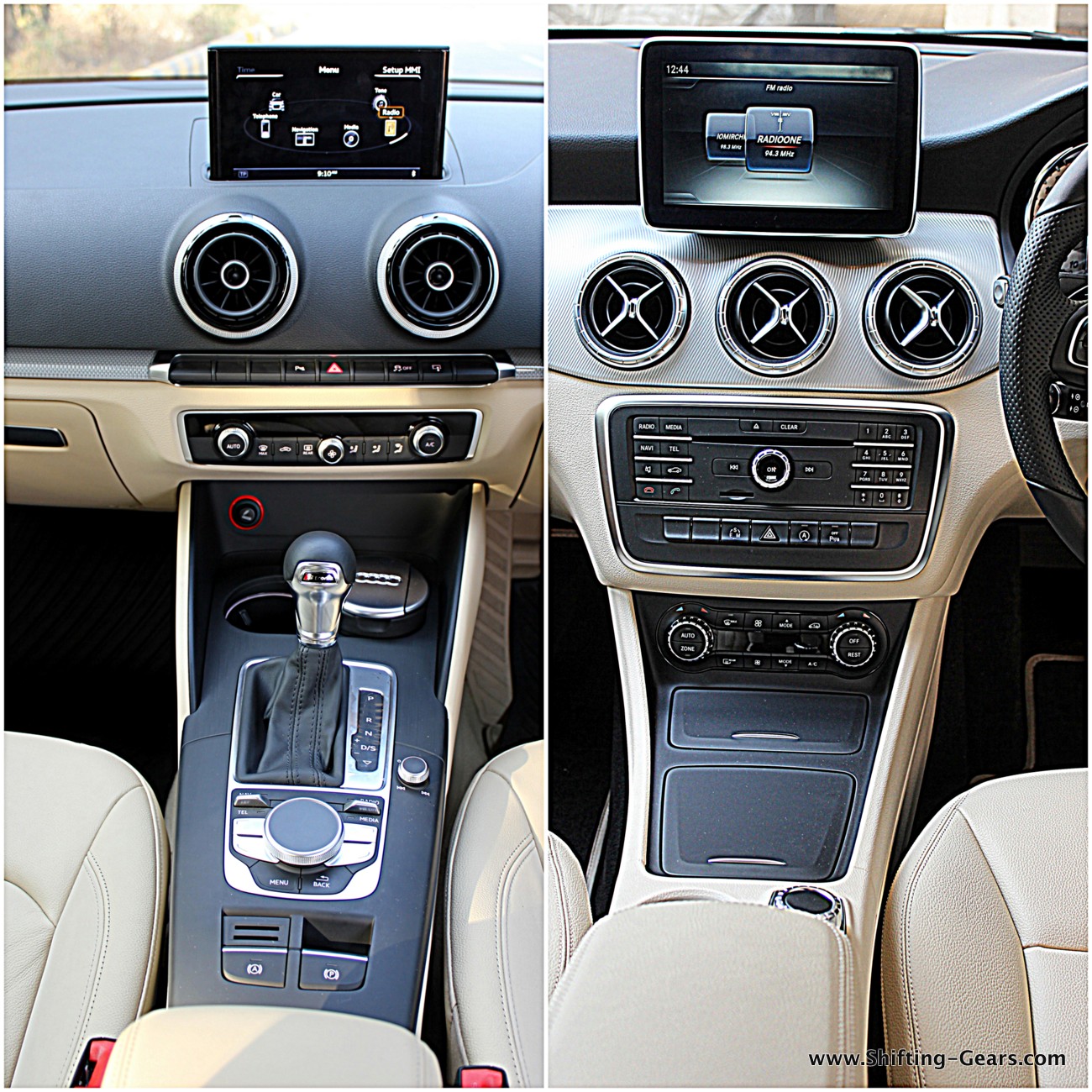 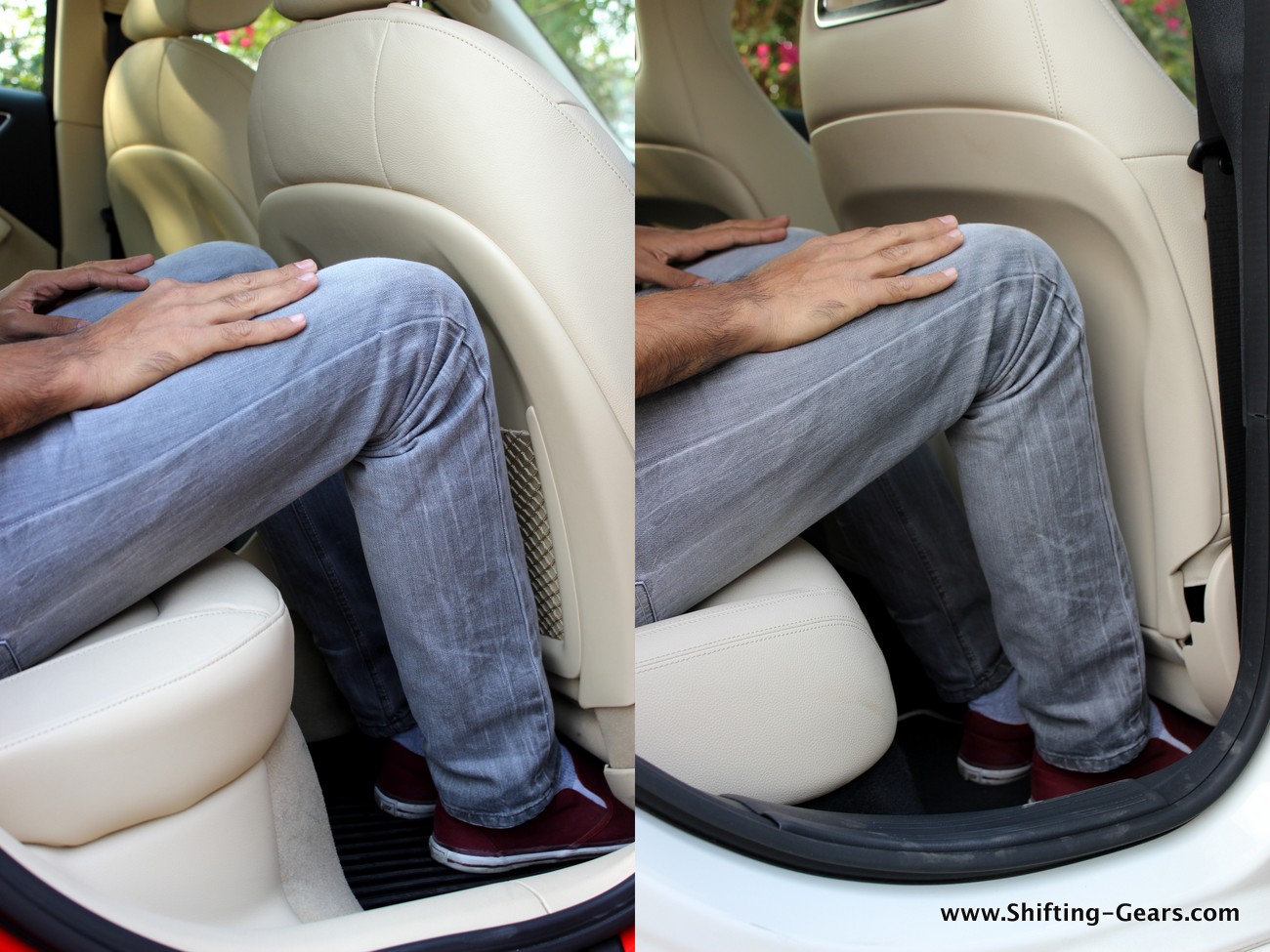 Audi offers 425 litres of bootspace on the A3 while Mercedes offers 470 litres with the CLA. Don’t let the numbers fool you though. The space saver spare wheel in the CLA eats up majority of the boot space while in the A3, the spare wheel is neatly tucked below the boot floor. To aid practicality, both cars get split & folding rear seats.

Engine, performance & handling:
Both the Audi A3 & the Mercedes-Benz CLA are offered in petrol & diesel engine options.

While power and torque figures on both the cars are very close to each other, it is difficult to judge things on paper. While the Audi A3 felt pale in almost every other department, the driving dynamics department is where it shines stronger. Weighing less thanks to the MQB platform, the A3 is very nimble to handle and sports a punchy power to weight ratio. Compared to the CLA, the petrol A3 is 215 kg lighter while the diesel model is 230 kg lighter. This difference is felt while gunning both the cars together on the highway. Not only that, one look at the fuel efficiency number also shows how the being lighter on the scale reflects in efficiency. The A3 does feel a little quick off the line and puts the power down better among the two. Both the cars sport engines which have been tried and tested on the Indian streets for quite some time. While we might highlight this difference in performance, not too many would complaint since buyers in this category primarily belong to the sedate driving style. This dilutes the only edge the A3 had over the CLA. 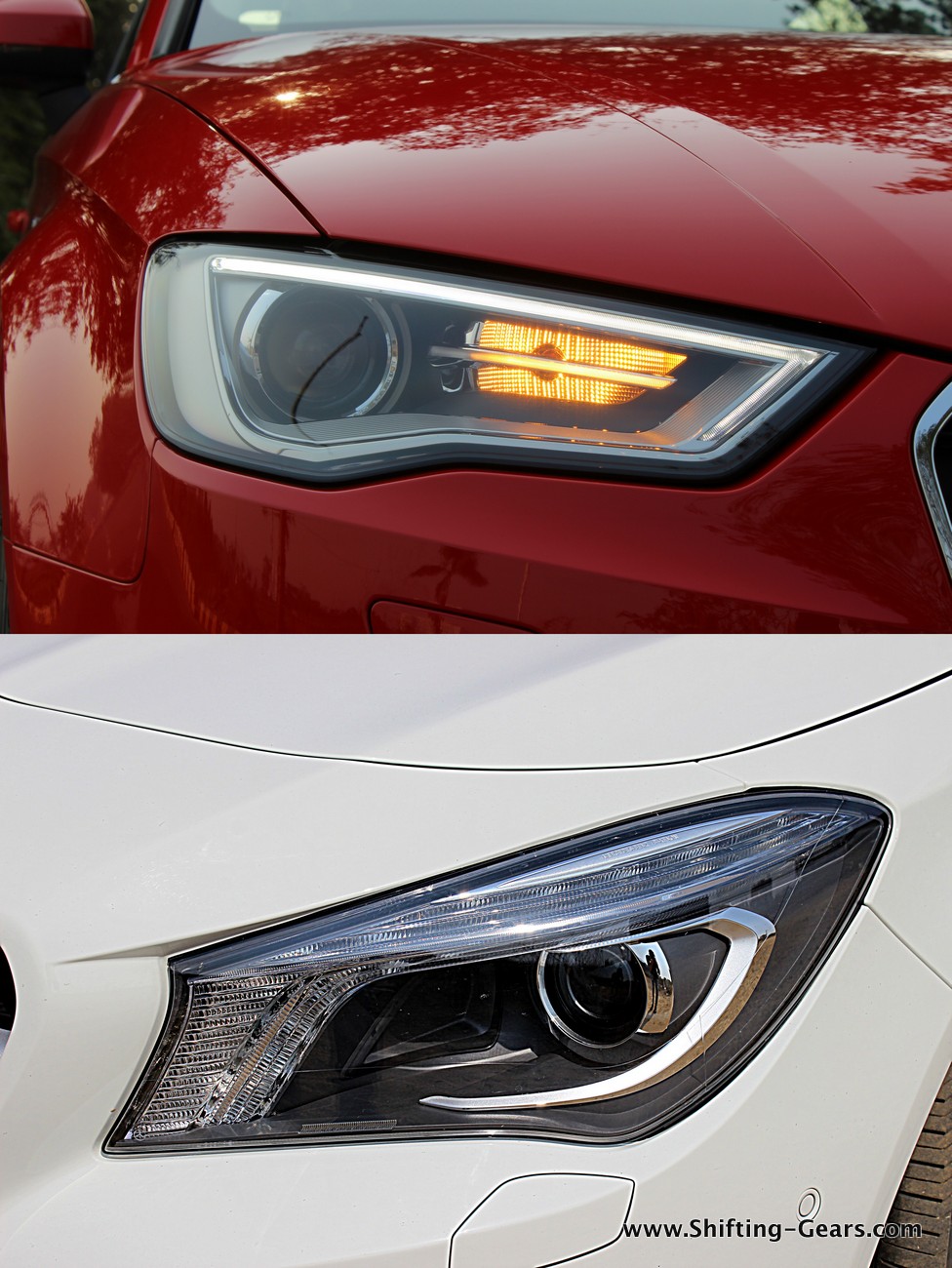 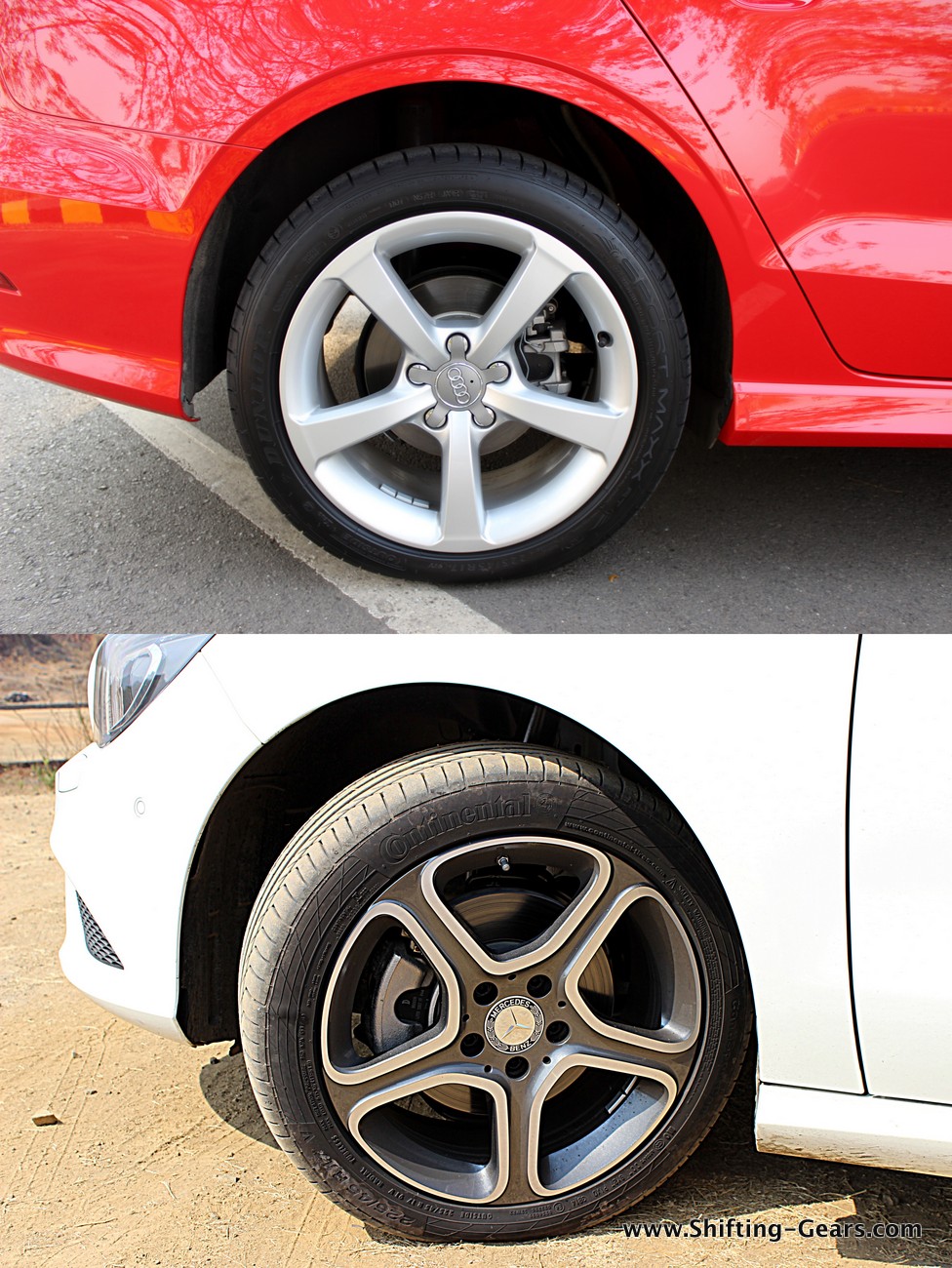 On the highway, the A3 is a much more fun to drive car. It is lighter and handles much sharper compared to the CLA. While on your favourite twisties, driving both these cars back to back, one can easily point out that the A3 turns in much better compared to the CLA. Not that the CLA is too far behind. Both cars are very engaging to drive with the A3 having say only a 20% benefit maybe. But with the missing paddle shifts, Audi gets a low score in this department while the baby Benz comes back with an equal tally. Steering feedback on both the cars isn’t of the tallest order, thanks to the EPS which takes away from the rich feel a hydraulic can deliver. Yet, both cars have wheels which are direct and light to use within city speeds. Highway stability on both the cars is acceptable and they stay planted while doing triple digit speeds as well. The Benz is the most aerodynamic car being sold in India with a CD of just 0.25, but then, cars in this segment are more about how the car stands out and not how it cuts through.

Both the cars are very good city commuters. A healthy ground clearance allows the A3 and the CLA to tackle city roads and speed breakers with aplomb. Good low and mid-range torque allow both the cars to move around city traffic with a light tap on the accelerator. Suspension setup of the CLA is more suited for the Indian roads compared to the A3, not by a huge margin, but still, worth a mention. The CLA can tackle rough roads well while in the A3, the stiff suspension does allow some jerks inside the cabin.

Both the A3 & the CLA are safe cars with 5-star Euro NCAP ratings. With an elaborate list of safety features, both cars assure the passengers that they are safe inside. In the after sales & service department, Mercedes-Benz again edges out Audi by offering 3-years unlimited kilometres warranty as standard while Audi offers 2-years standard and an optional 2-years extended warranty. Mercedes-Benz also announced that the MFA range of compact cars will be cheaper to maintain with an ownership cost as low as Rs. 1.99 / km for the first 20,000 km. The CLA 200 easily overshadows the A3

If you’re out to buy one, do look at the pictures above very closely. There is nothing better you can buy if you want a poser except for the Mercedes-Benz CLA. It simply blows away the Audi A3 in that department making it look rather ordinary. Even in terms of equipment inside, the CLA with its full size dashboard feels like a more complete cabin compared to the A3. The A3 starts at a much lower price tag, but that is due to the cut-price, feature less version. Apple to apple, there is not much of a difference in the price tag if you look at the top end trims even though the CLA is a CBU currently. The CLA 200 is a well rounded product compared to the A3 and offers much more value (visual) for your money. Both the cars are strictly good for 4 and if you’re looking at self-drive options, they make perfect sense. Wrapping up, we would recommend the Mercedes-Benz CLA 200 over the Audi A3.

Click here to read our detailed review of the Mercedes-Benz CLA 200.

Click here to read our detailed review of the Audi A3.