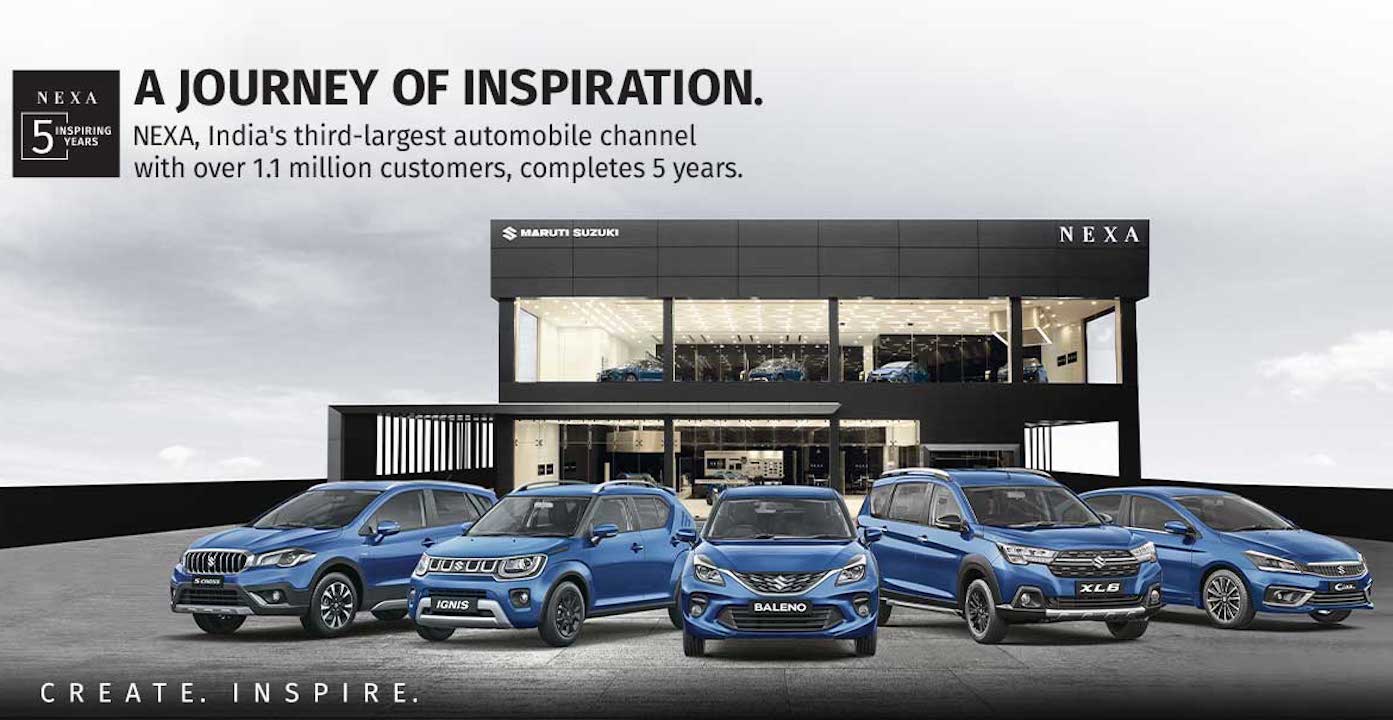 Indo-Japanese car major, Maruti Suzuki has announced that the brand’s premium retail channel – NEXA has completed 5 years of service and has provided customers with over 1.1 million cars since its inception on 23rd July 2015. The Nexa retail channel is the 3rd largest automobile retail network in India with 370+ showrooms across 200+ cities. The Nexa showrooms showcase 5 premium models for the Maruti Suzuki which includes the Ignis, Baleno, Ciaz, S-Cross and the XL6.

NEXA  was born on 23rd July 2015 and on the very next month the premium cross over SUV the Maruti Suzuki S-Cross was launched to be sold under the Nexa brand. In October of the same year, Maruti Suzuki launched the much-popular  Baleno, a premium hatchback to the Nexa channel.

In August 2016, the Nexa brand associated itself with the Lakmé Fashion Week and in January of 2017 the small premium urban SUV, the Maruti Suzuki ‘IGNIS’ was launched which is retailed through Nexa showrooms. Following the Ignis came the popular sedan Ciaz in April of 2017 which gave competitors like the Honda City a run for their money.

In January of 2019, Maruti Suzuki launched the NEXA Music in partnership with Padma Bhushan Awardee Indian composer, singer and music producer, A.R. Rehman also known as the Mozart of Madras. In August the same year, the brand launched a premium MPV called the XL6 which retails from the Nexa network and the brand in September 2019 achieved the milestone of 1 Million sales in 4 years of service calling it “Inspiring One Million”.

The Nexa brand has been an inspiration for many and the brand claims that it has impressed the minds of ‘young, urban and aspirational customers’ and nearly half of the customers associated with the Nexa brand are under the age of 35 Years who are well travelled and technologically savvy.

The Nexa brand has provided its customer with innovative experiences such as NEXA Music, NEXA Lifestyle, and NEXA Journeys. Additionally, the brand has also launched the NEXA Augmented Reality (AR) that allows customers to explore Nexa products in a digitalised format. The Nexa range also offers its customer best-in-class technologies such as Smart Hybrid, Suzuki Connect, Smartplay Infotainment System and NEXA Safety Shield.