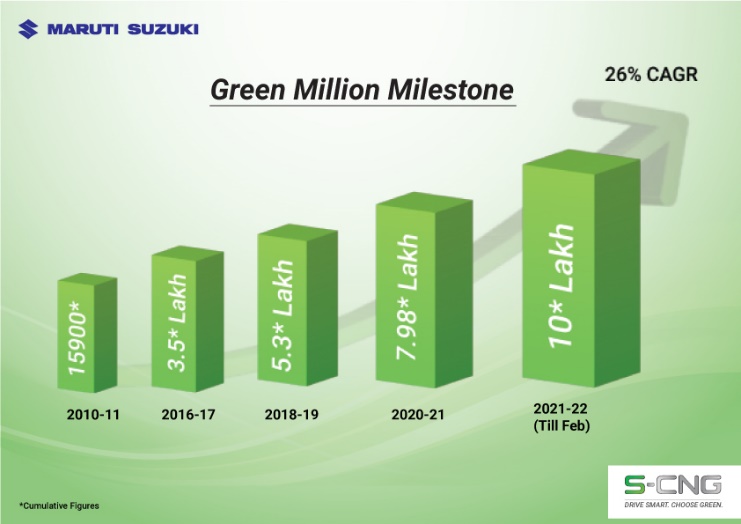 Maruti Suzuki India Limited states that there are over 3,700 CNG stations across India, making it an accessible commodity. Meanwhile, the Government of India had announced its plans of establishing 10,000 CNG stations over the next few years. MSIL aims to follow that notion and expects that the demand for CNG vehicles in India will remain robust. The automaker also thinks that CNG will eventually play a huge and significant role in reducing carbon emissions throughout India.

Maruti Suzuki S-CNG technology has played a significant role in laying the groundwork for democratising CNG technology in the industry. Since 2010, the company has systematically addressed legacy concerns associated with CNG vehicles for safety and performance throughout the country. Maruti Suzuki’s efforts to popularise the adoption of S-CNG vehicles fall in accordance with the Government’s vision for the same. The automaker aims to reduce oil imports and enhance natural gas shares from 6.2% to 15% by 2030.

The Maruti Suzuki S-CNG range of vehicles offers optimum performance with superior fuel efficiency thanks to various technological components. These include Dual Interdependent ECUs with Intelligent Injection systems that seamlessly communicate with each other for maintaining optimal air-fuel ratio. The vehicles also get a Re-tuned chassis suspension and braking system to tackle various kinds of terrains in India. MSIL has also equipped the vehicles with a Common rail-based CNG injection system to ensure optimal fuel injection pressure and distribution.

Maruti Suzuki has ensured to factory-fit its S-CNG vehicles with smart safety features that will safeguard occupants in extreme scenarios. One of these features is a microswitch that ensures that the vehicle is off and doesn’t start while refuelling. The vehicles also sport Stainless steel CNG pipes with patented ferrule joints and a leak-proof design, offering corrosion resistance. Another safety feature includes the advanced dual solenoid system, which ensures additional safety in case of a gas leak.

Additionally, the system auto-cuts fuel during the gas leak and releases high-pressure CNG directly into the atmosphere. Meanwhile, a non-return valve mechanism prevents backflow of high-pressure CNG gas and eliminates chances of any leakage within the vehicle. The vehicles also sport a CNG-filler filter that protects the CNG system from corrosion and dust particles, which enhances durability. Along with a petrol-mode ignition, that enhances lubrication during cold starts, the vehicles also get an integrated electrical system. 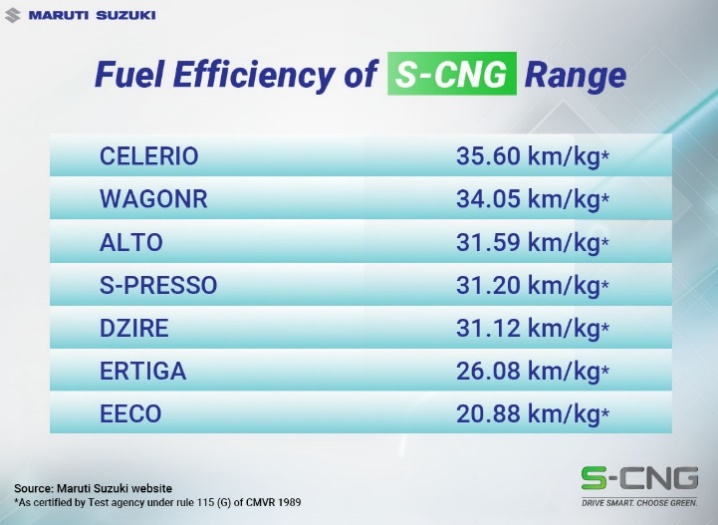 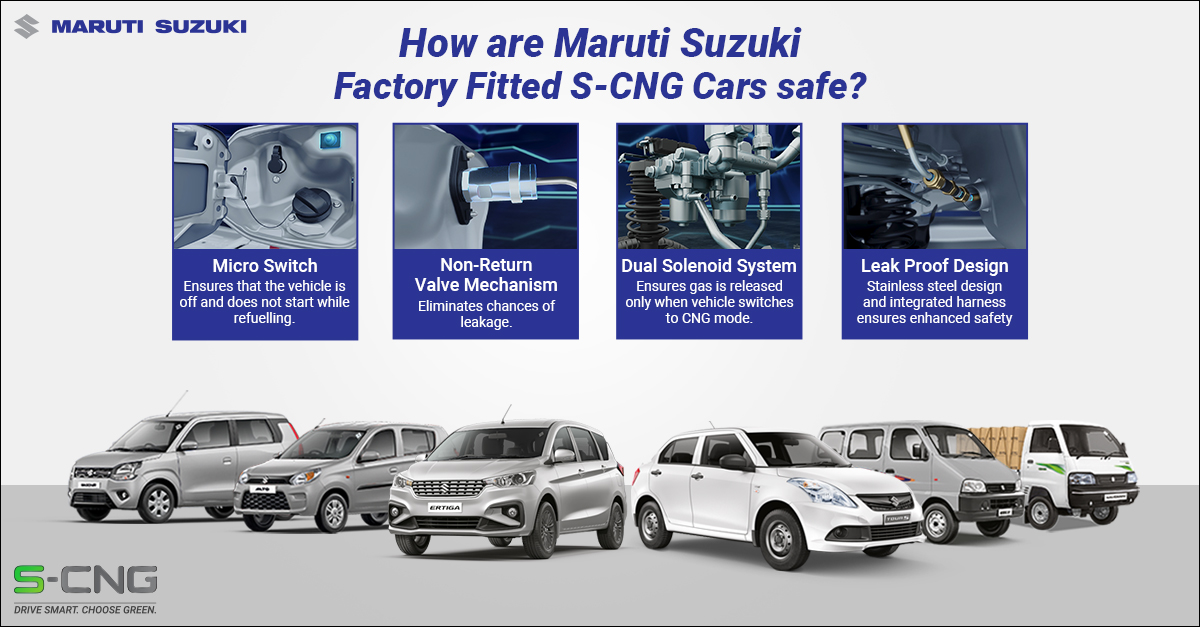 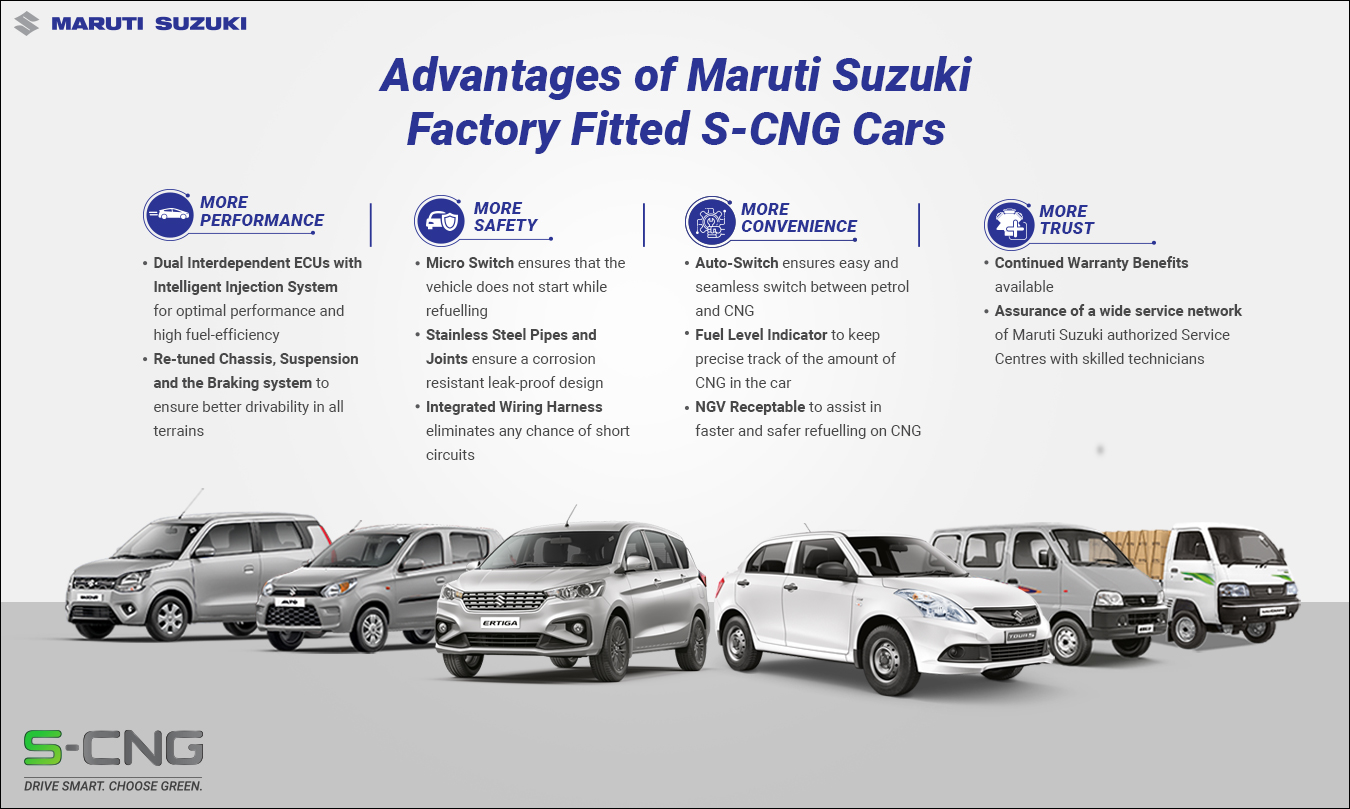