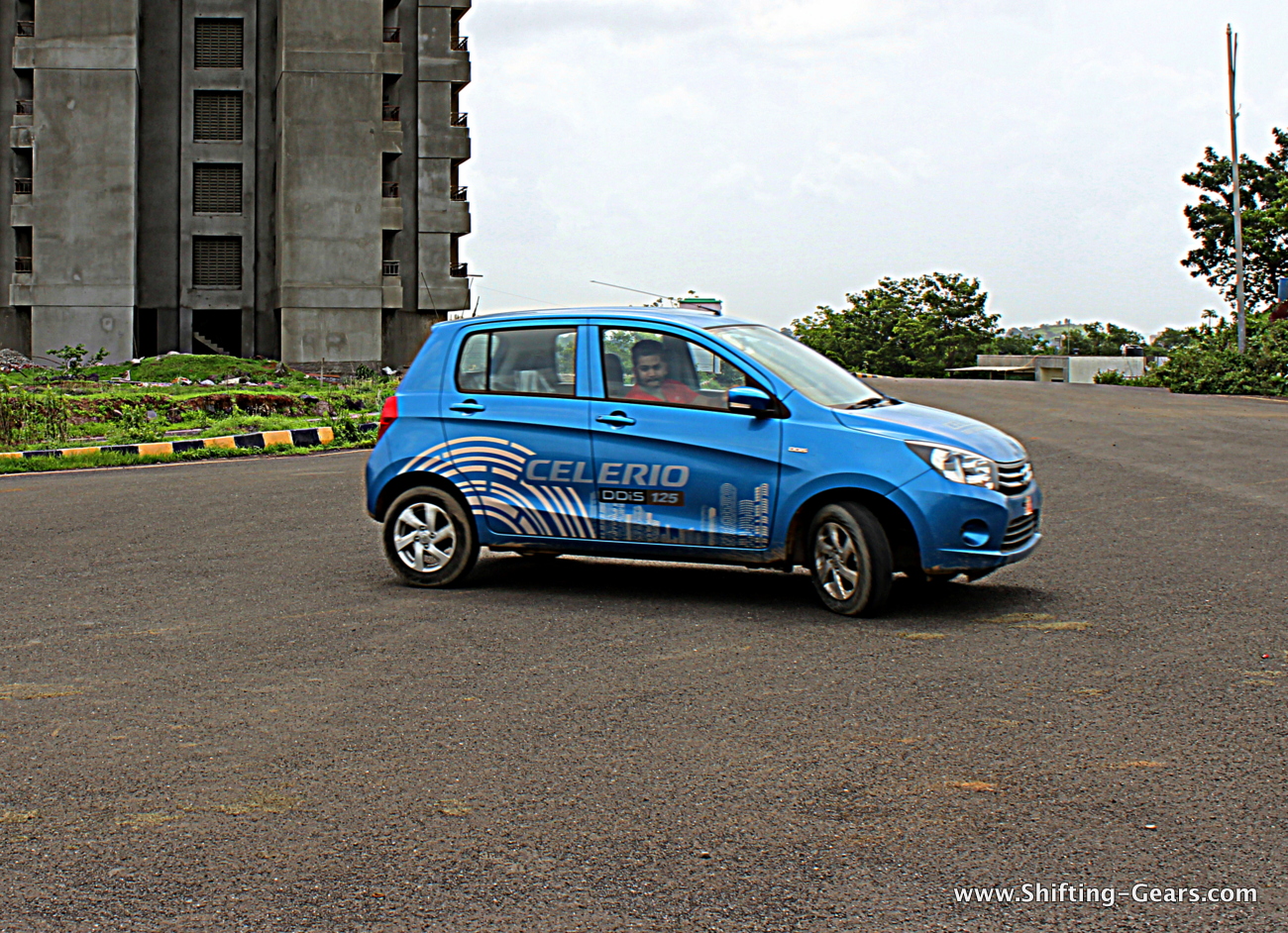 There’s no doubt, that in the budget segment, no manufacturer comes close to giving a tough fight to Maruti Suzuki. Yes, brands like Hyunda have managed to capture a significant market share in the Rs. 5 lakh or below segment, but the volumes which Maruti Suzuki generates is far superior. Launched in 2013, the Celerio hatchback replaced the likes of A-Star & Zen Estilo in the Indian market. Both the discontinued models were limping on the sales front, and discontinuing them did no harm to the brand. The Celerio is based on the A-Wind concept which was revealed in 2013 & then, a production-ready model was revealed by Maruti Suzuki to Indian masses at the 2014 Indian Auto Expo. Right from the day of launch, the Celerio was an instant hit. Thanks to Maruti Suzuki’s immediate connect with the budget conscious buyers, and also the spot-on marketing efforts; the Celerio became one of Maruti Suzuki’s best selling products. Not for forget the introduction of AMT (Automated Manual Transmission) to the Indian masses. Where automatics were considered as expensive and a convenience feature available only at the higher end, Maruti Suzuki launched it at an affordable price, in a affordable car & with a brilliant ad campaign hinting that it is even affordable to maintain. The Celerio has recently crossed the 1 lakh sales milestone in India. It has bumped up Maruti Suzuki’s market share in the budget hatchback space from 61% to 71%. 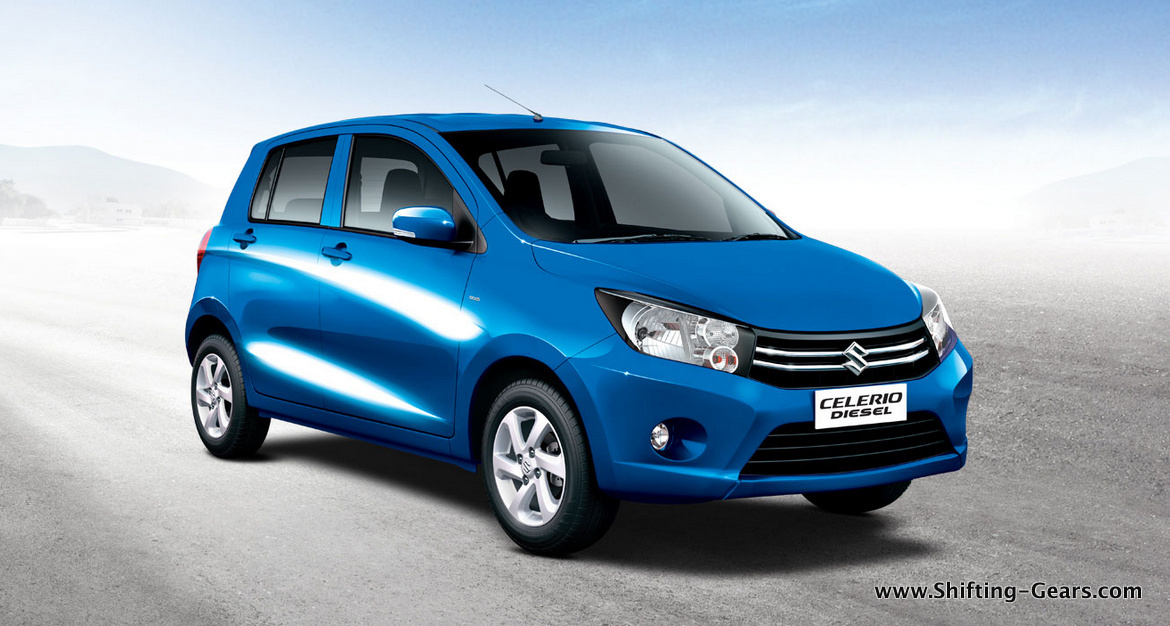 The AMT variant led to long waiting periods and broke all myths that automatics do not have demand in the budget segment. Earlier available only in the mid variant, Maruti Suzuki also launched the top-spec ZXi variant with AMT a couple of months back for customers who wished to get a fully-loaded hatchback.

But all this success was not enough. Maruti Suzuki was confident that the Celerio had more potential. This led the brand to build a diesel version of this popular hatchback. Maruti Suzuki’s small wonder, the diesel motor in the Celerio diesel is one of the smallest diesel engines in a mass market product in the world. Maruti Suzuki claims that in a bid to make this engine reliable, the brand has tested it for over 4 – 5 lakh kms. During this street validation process, Maruti Suzuki tested this motor with all types / grades of diesel fuel from all over India. Powertrain testing was also conducted on high altitudes, hot & cold temperatures to gauge performance. This engine has achieved 97% localisation with only a few parts such as casting components, chain drives, etc. being imported. Maruti Suzuki can manufacture more than 1 lakh units of this diesel motor every year, from their Gurgaon facility. This is a very big launch for Suzuki, as this is the first ever in-house developed diesel motor in 60 years of the companies history. Maruti Suzuki has invested over Rs. 900 crore on the development of this DDiS 125 engine.

Exteriors:
The Celerio diesel is just another variant, hence, obviously, the body remains the same. The design of the Celerio is nothing great, typical of budget segment hatchbacks. Yes, the styling is neutral & offends none; but with the amount of success the Celerio has recorded, the unknown would imagine a much better looking model. 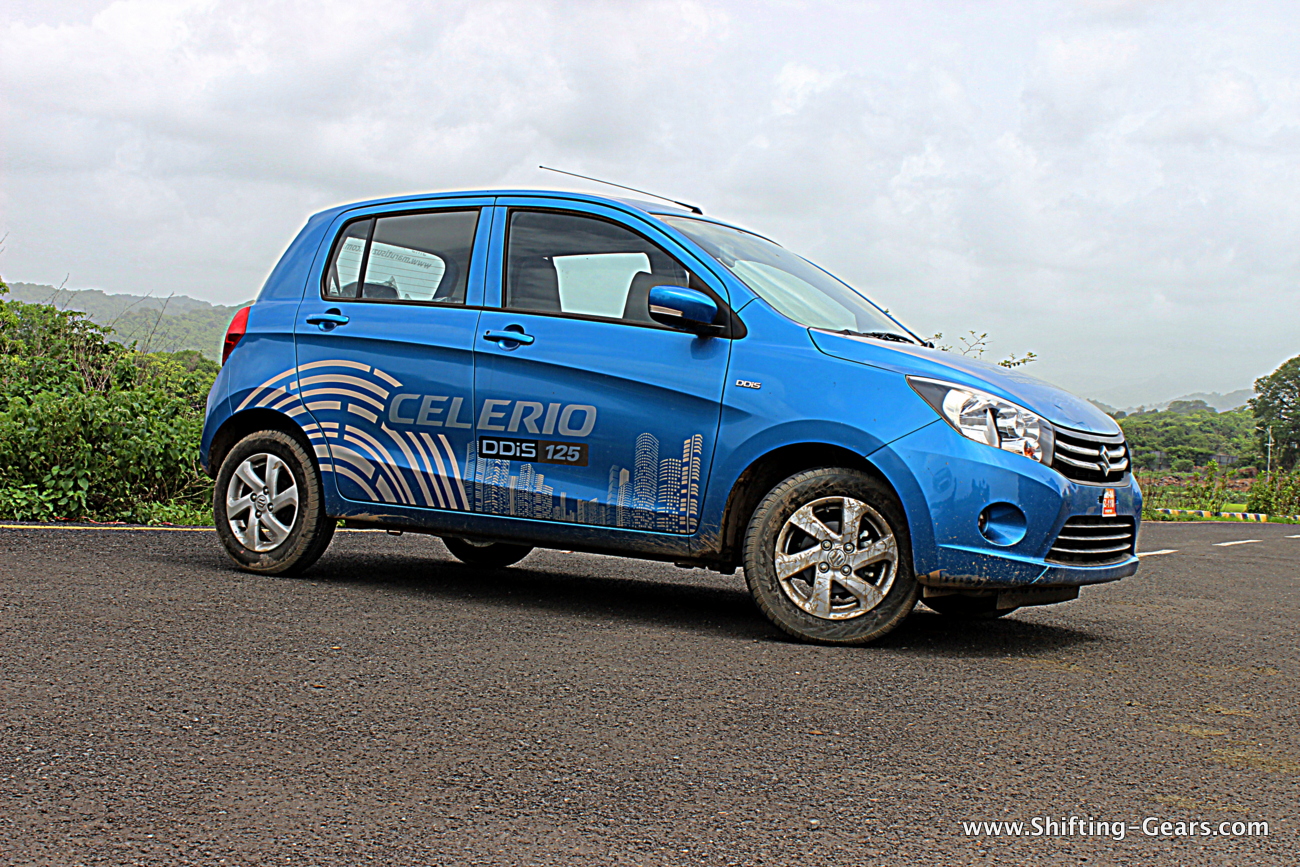 At the front, you have a twin-slat chrome grille with one more black slat at the top & bottom in black. Headlamp is smoked out and the parking light & turn indicator is housed separately in round sections. Below, you have a round, recessed fog lamp and the air dam is also pretty plain Jane. Bonnet & bumper gets subtle crease lines to add some character to the Celerio’s face.

Side profile is dominated by a bold crease line while flows from over the front wheel all the way up to the tail lamp. On the diesel model, the Celerio gets the same 6-spoke silver alloy wheels. We wish Maruti Suzuki considered Tata’s design tweak from the Bolt where the alloy wheels although the same design, are in different shades on the petrol & diesel variants. The front fender houses the DDiS badge. ORVMs get LED turn indicators as well. 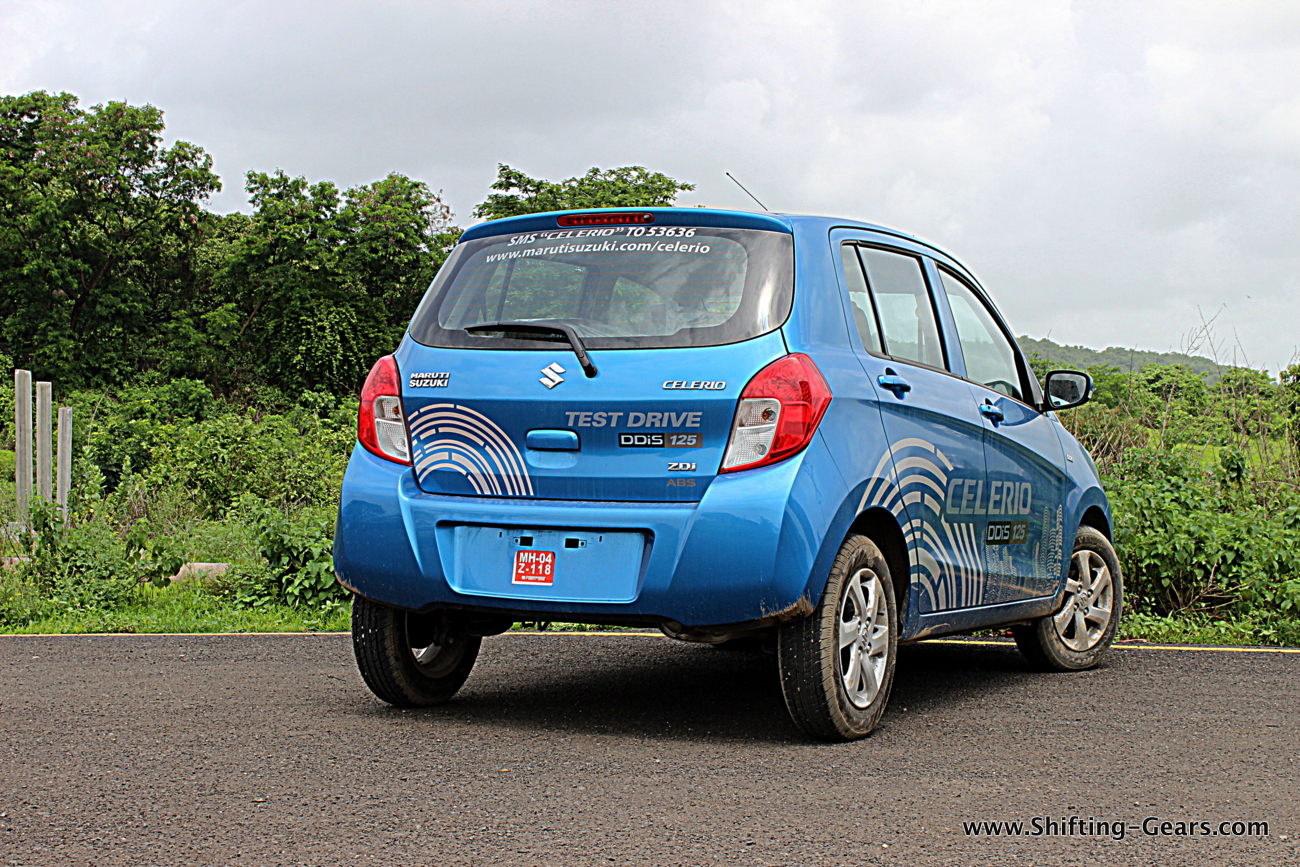 At the back, the Celerio looks a bit quirky, and definitely not the best amongst the competition. Arch rivals Chevrolet Beat & Hyundai Grand i10 look much better from this angle. You get a clear lens tail lamp, small pseudo spoiler, rear wash & wipe and a old-school flap type lever to lift the boot lid. Badging at the back includes the Maruti Suzuki badge, Celerio badge, Suzuki logo, variant badge & an ABS sticker.

The only changes compared to the petrol version on the outside are the ZDi & DDiS badges, nothing else.

Interiors:
On the inside, the Celerio gets beige & black interiors. Beige dominates the interior colour scheme making the cabin feel more airy & roomy.

Maruti Suzuki offers a 3-spoke steering wheel with integrated audio & telephone controls. However, the telephone controls are placed below the horn pad, and not on top. Behind, the instrument cluster is split in 3 parts. LHS for the tachometer, centre portion for the speedometer & a small MID on the RHS. MID displays data such as time, fuel, average fuel efficiency, instantaneous fuel efficiency & DTE. Instrument cluster looks very basic & boring; reminding you of having bought a budget hatchback. 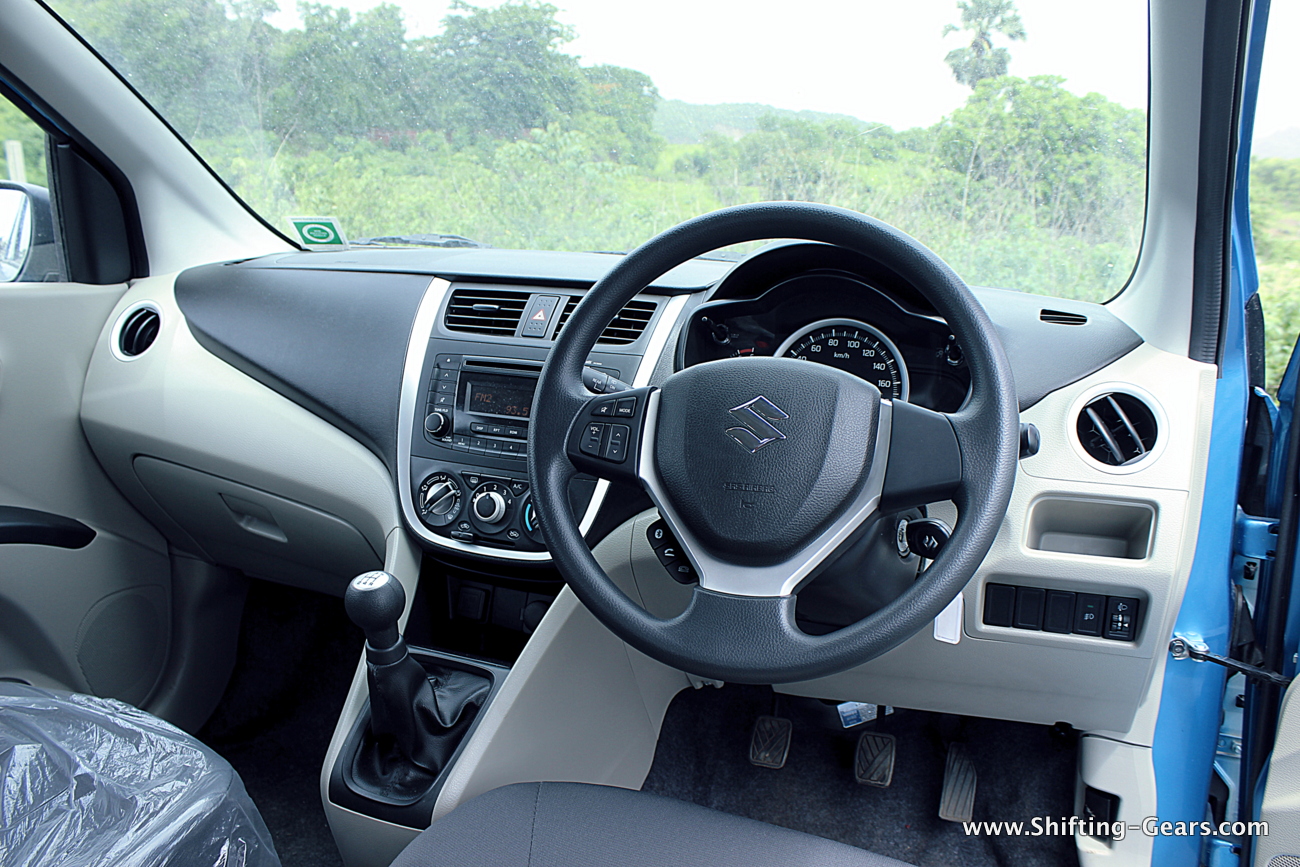 Centre console looks classy with black, beige & silver mingling well. There is a dual din stereo system with bluetooth, aux-in & USB support. Sound output from the stock system is decent, but does sound economy grade. Some might feel the need to upgrade, at least the speakers. Below, AC controls are of the rotary type & the plastics used here feel average. AC performance is good, and speed 2 kept the cabin comfortable on a rather sunny monsoon day. Round gear knob feels sporty, and falls nicely in your hands. The gear stick is also wrapped in leather neatly. Unlike Honda where this leather patch is never connected to the gear knob.

Overall fit & finish is mediocre & touch & feel of plastics is also pretty average. The Grand i10 is just leaps & bounds ahead. 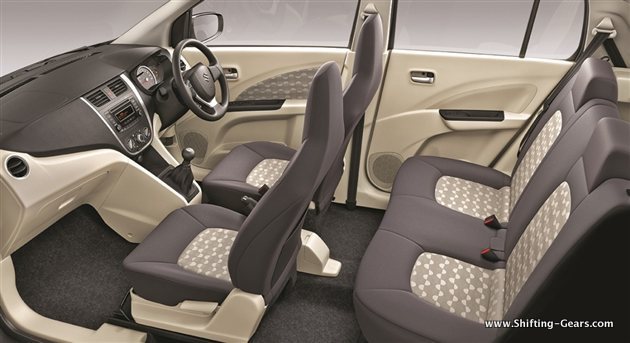 Getting in & out of the Celerio is fairly easy. Seats also get the black & beige treatment. Seats are of soft compound and comfortable for your city runs. Integrated neck restraints is a cost cutting feature. Front seats also lack lateral support, so while driving enthusiastically, you’re not really going to be held in place. At the back, the Celerio can accommodate 2 well built adults very easily, but the 5th occupant is a bit of a squeeze. The seat bench is raised a bit which makes things less than ideal for the passenger sitting here.

The Celerio has 235 litres of boot space. For times when you need to carry more cargo, Maruti Suzuki also offers a 60:40 rear seat split on the Celerio.

Engine, performance & handling:
Powering the Celerio diesel is a 793cc, 2-cylinder, turbocharged diesel motor producing 47 BHP of power and 125 Nm of torque matched to a 5-speed gearbox. The branding of ‘DDiS 125′ comes from the amount of torque generated. Accounting for 4 years of R&D, this is the first ever diesel self-developed engine by Maruti Suzuki in India. Till date, all Maruti models used the Fiat-sourced Multijet engines. This E08A (DDiS 125) motor gets DOHC with 4 valves / cylinder and weighs 89 kg. This engine uses a small fixed geometry turbocharged & also has a vertically mounted intercooler.

The Tata Nano is the only other car with a twin-cylinder motor available in India. With this in mind, we were a bit apprehensive when we fired up the Celerio diesel for the first time. But to our delight, the Celerio diesel does not sound like an autorickshaw, which the Tata Nano does, loudly! When you fire up the motor though, there is an audible clatter heard inside the cabin. The idling RPM is around 1,000 RPM which is higher than other diesel cars, but this might have been done to keep vibrations under check. Once you get going, the engine noise doesn’t feel that prominent & given that your AC & stereo would be turned on, you would given the engine crudeness a miss. Yes, NVH levels are not the best-in-class, but are surely acceptable given that this is a 2-cylinder motor & in the budget segment. You would read reviews which say that the engine is noisy & vibrates a lot, but in the mass market, it doesn’t really make a difference. Those who are considering this model after having owned a bigger diesel engined car would feel the difference & crudeness; but for a first time diesel car buyer, which is Maruti Suzuki’s target audience, this isn’t bad at all. 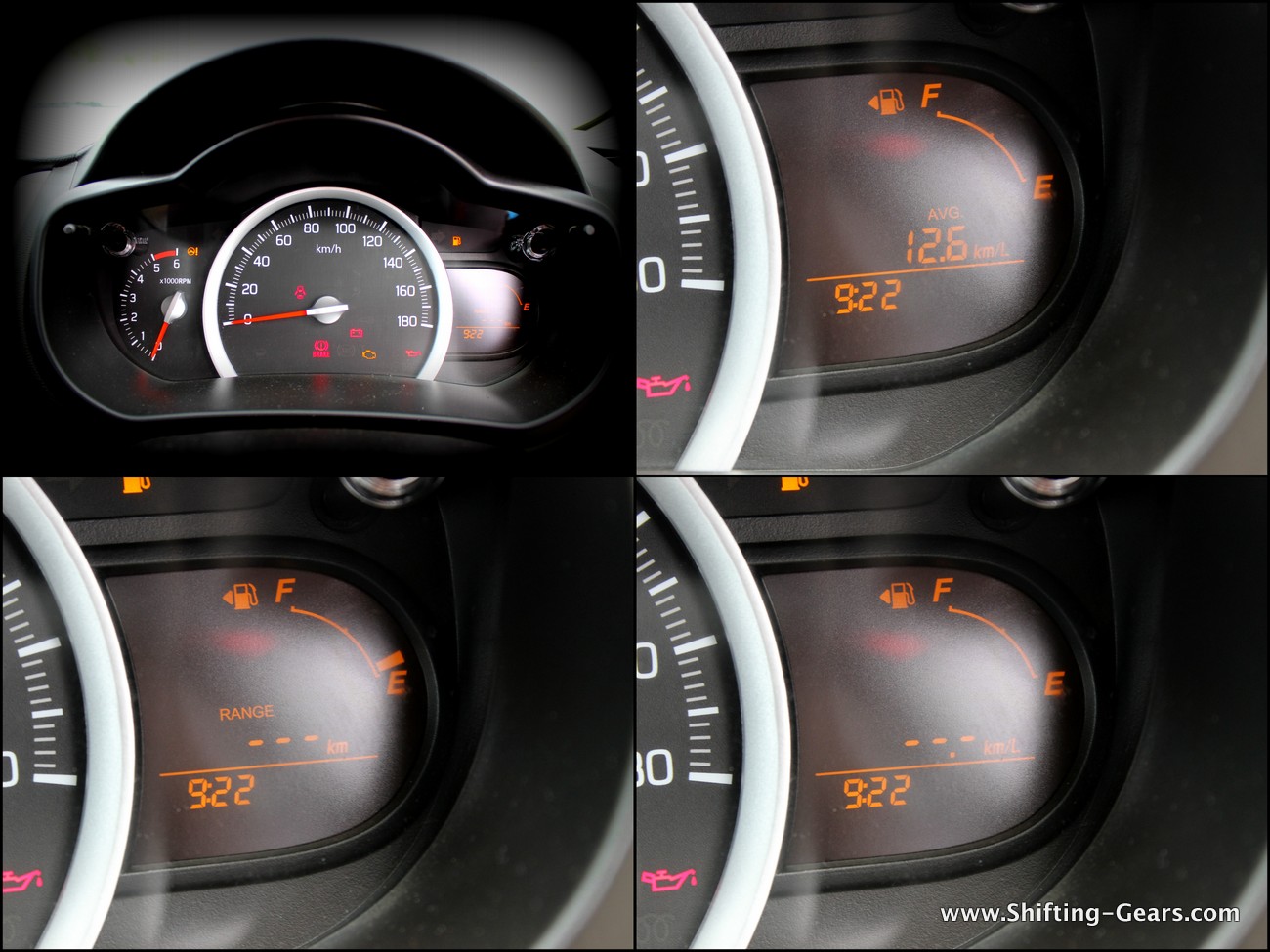 The clutch on offer is light, and has a fair amount of travel to allow you to slip it during traffic situations. Let off the clutch and the rolling motion is a bit jerky. The engine is very responsive & you can feel the throttle responding with a light tap on the accelerator. 1st & 2nd gear offer good driveability within the city & the 3rd gear is tall enough to help you sprint away from a traffic signal. Within city limits, this small wonder doesn’t feel underpowered at all. Torque availability lower down the revv range will keep daily commuters happy.

Push the Celerio diesel hard & you do notice a bit of that turbo spool. No, it is not as punchy as the Swift & neither does it spool for long enough to give you an adrenalin rush. To keep up the pace on the highways, the Celerio diesel’s motor needs to be kept on the boil. The engine needs to pushed hard on highways to overtake. The engine however runs out of breath & power delivery tapers beyond 3,500 – 4,000 RPM. It is best to upshift around 3,000 RPM or below to keep the engine happy. It sounds very crude when you push it beyond 3,500 RPM. Also, while doing so, vibrations increase. It is best to drive the Celerio is a sedate manner & not to engage your ‘Fast & Furious’ mode; because it is going to achieve nothing. 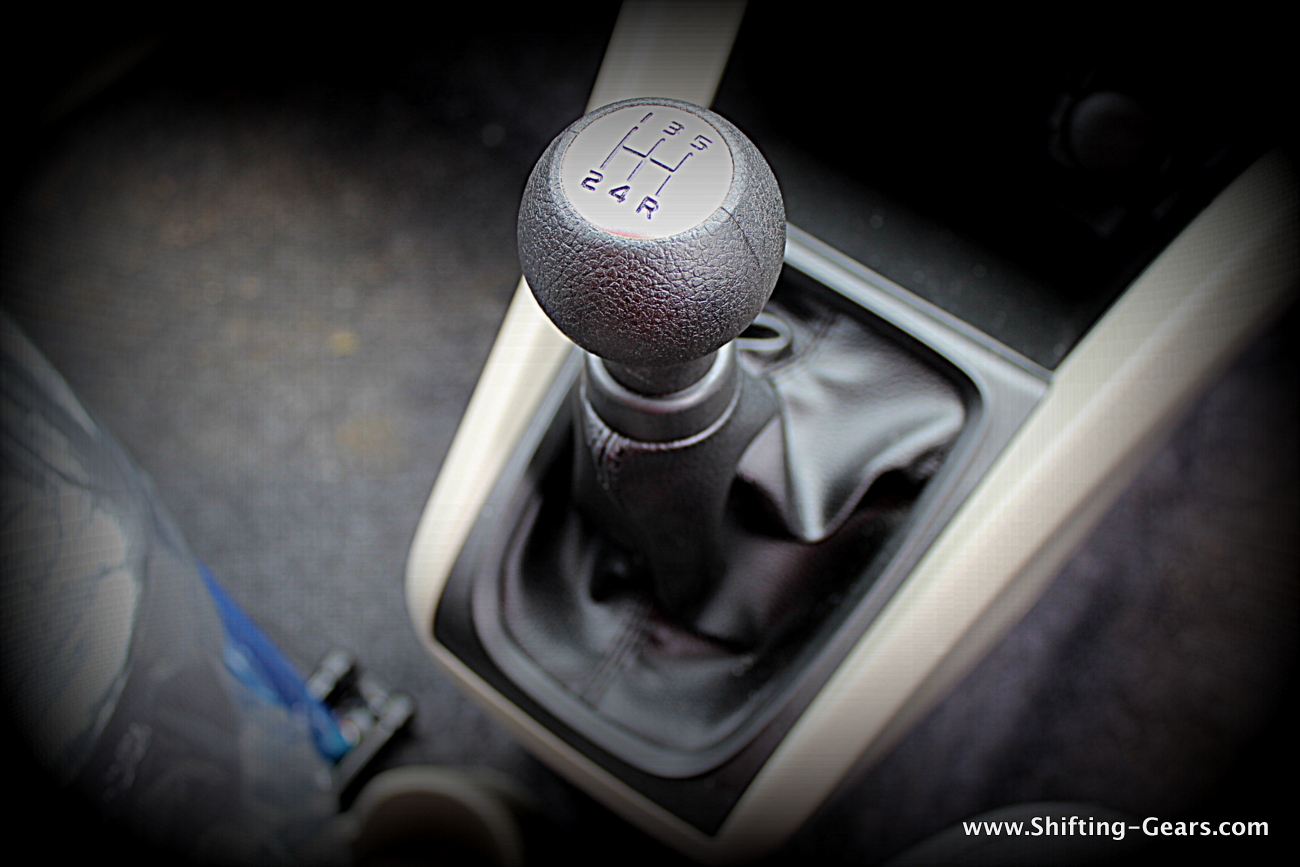 The gearbox on the Celerio diesel works fine & has short throws along with well defined gates.

The Celerio is a budget hatchback; which summaries the ride & handling department. Suspension setup is decent by segment standards and soaks the bumps well. Large potholes can leave the occupants a bit unsettled. Steering wheel is light, but firm by EPS standard. We like this since the very gaming-like light steering wheels feel very vague. At speeds, the steering weighs up well and is much better when compared to the Grand i10. Overall balance is acceptable & for a point A to point B commuter, we don’t think there will be many complaints in the dynamics department.

With 165mm of ground clearance, tackling broken city roads was not an issue. We drove for over 50 kms & although the diesel makes the front end heavier, the engine sump did not scrape even once.

Braking performance from the front disc & rear drums assisted with ABS is good. Pedal feel is also acceptable. The 165/70/R14 patch JK Tyres perform well but when pushed hard, reach their limits very soon. An upgrade to a better rubber is a must if you love to have some fun around the corners. 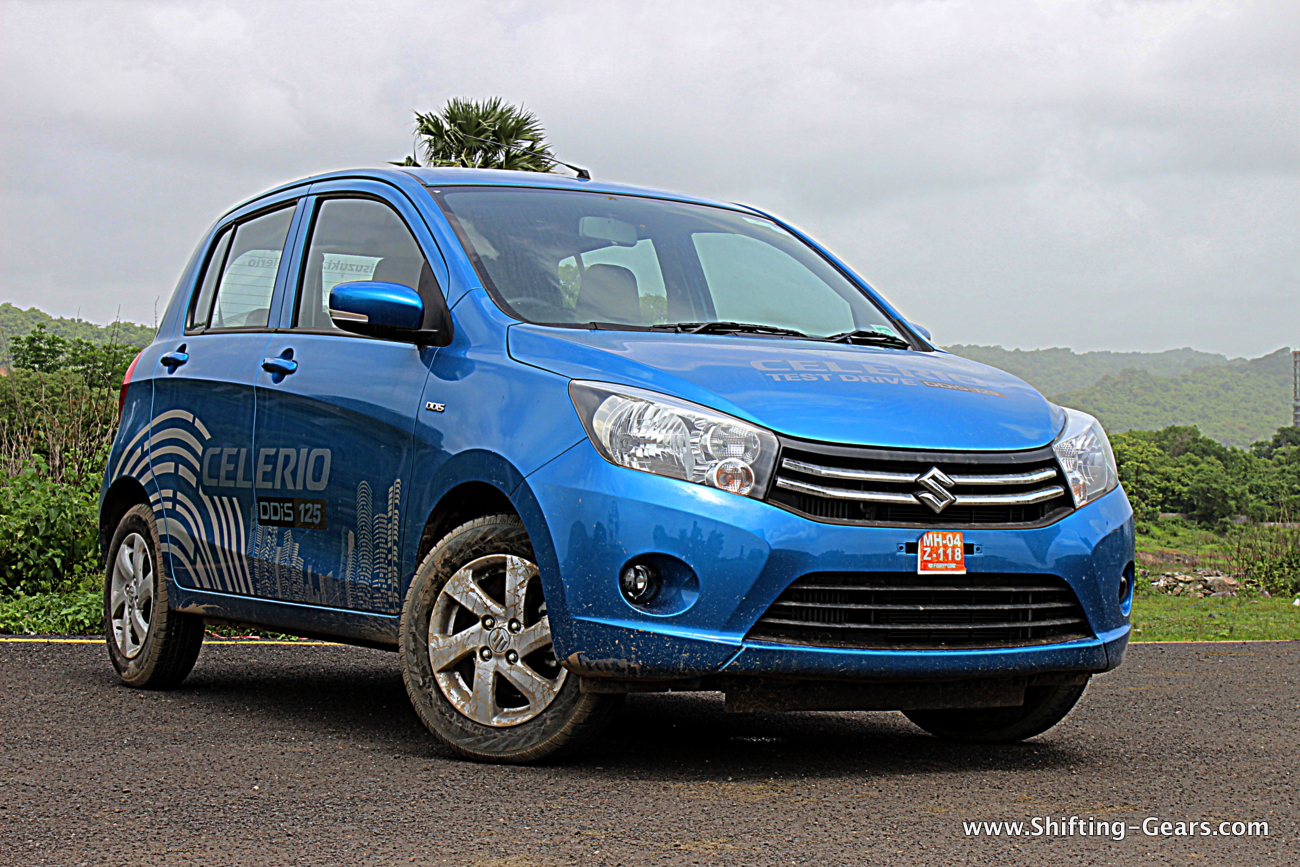 Overall the Celerio is just an average looking hatchback, but the strength of this model lies under the hood. Earlier in the form of AMT, and now with this newly developed diesel motor. As if the case with other Maruti Suzuki products, the Celerio is also low on equipment when compared to competition, but thanks to the superior reach throughout the country & superlative customer support; it is hard to ignore products from the stable. If you’re primarily looking for a very economical budget hatchback, the Celerio diesel will tick most of your boxes. Let’s just mention 27.62 kmpl once more, just for fun… 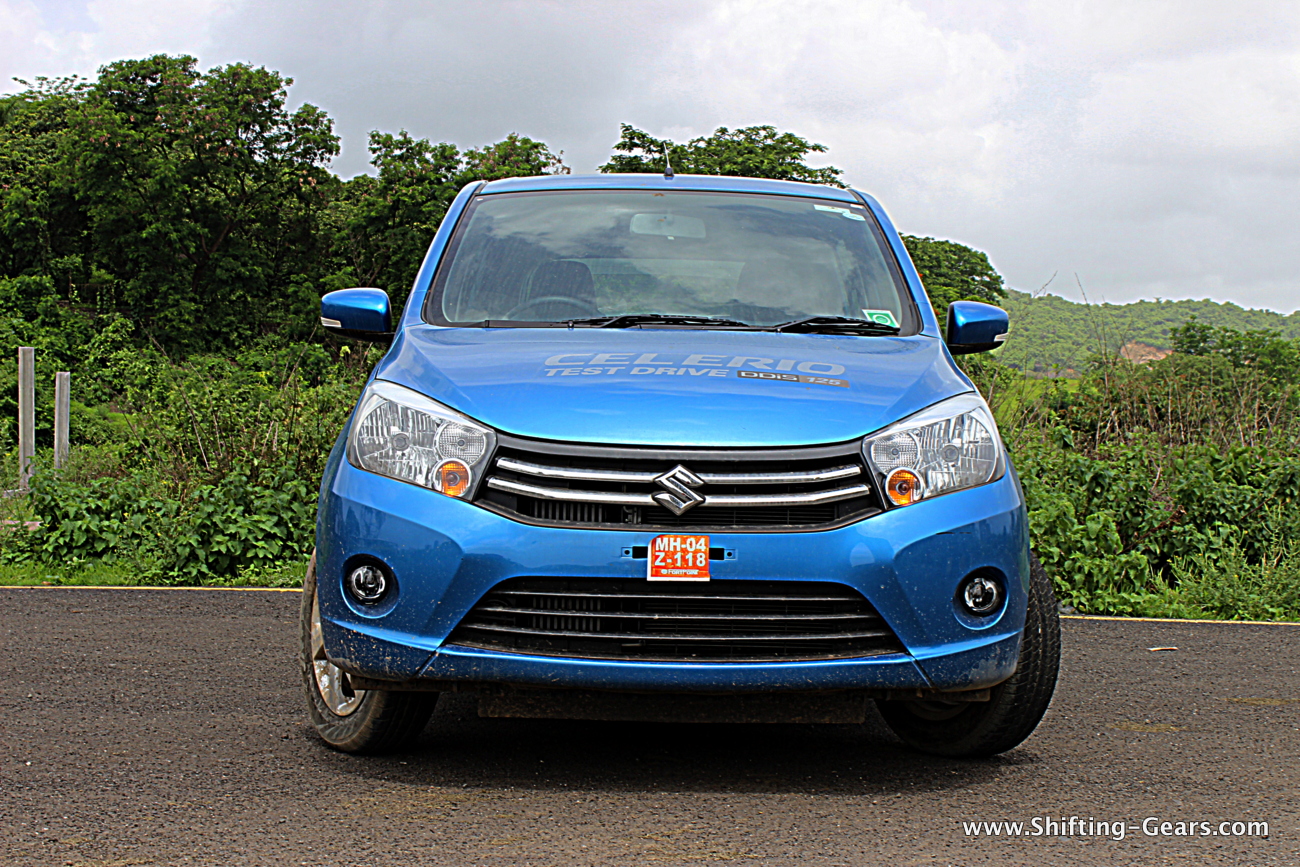 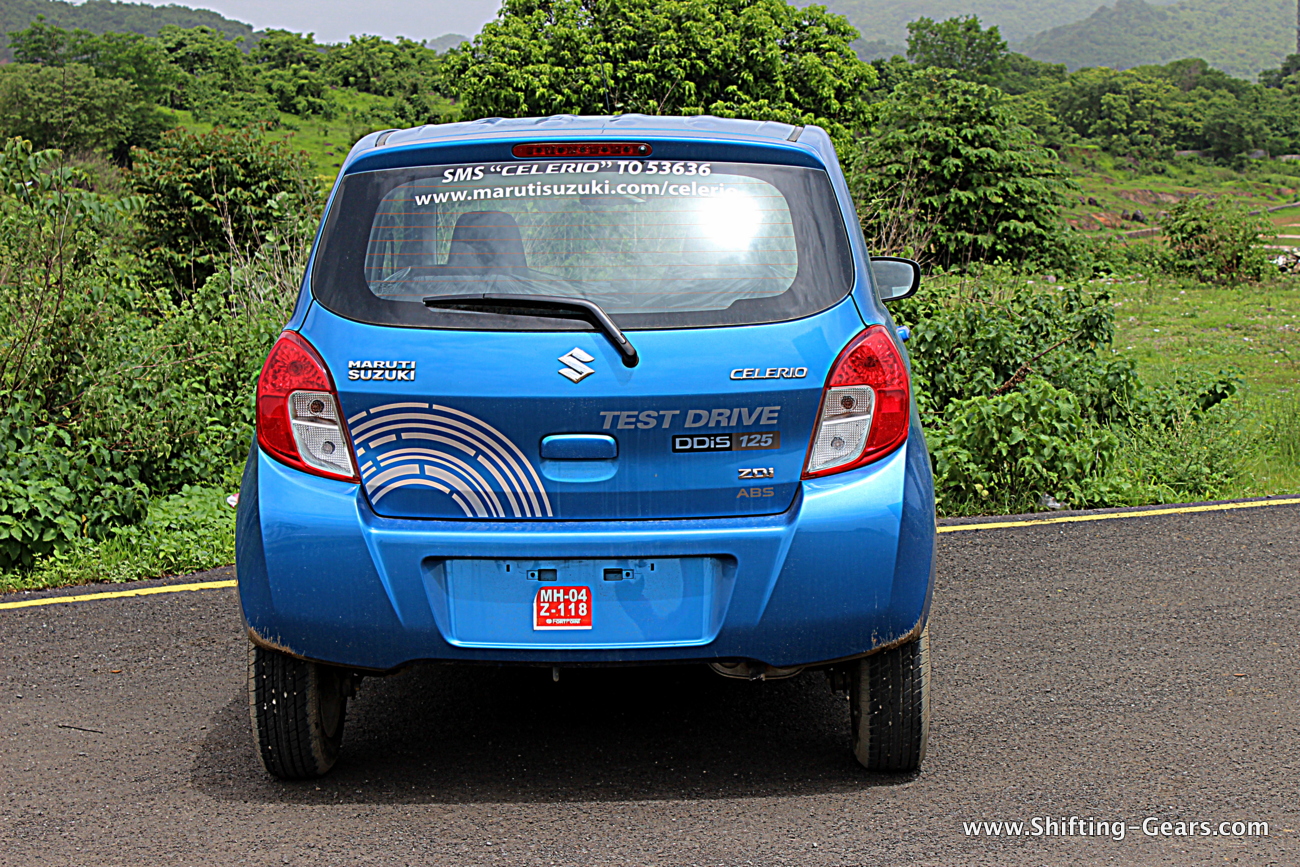 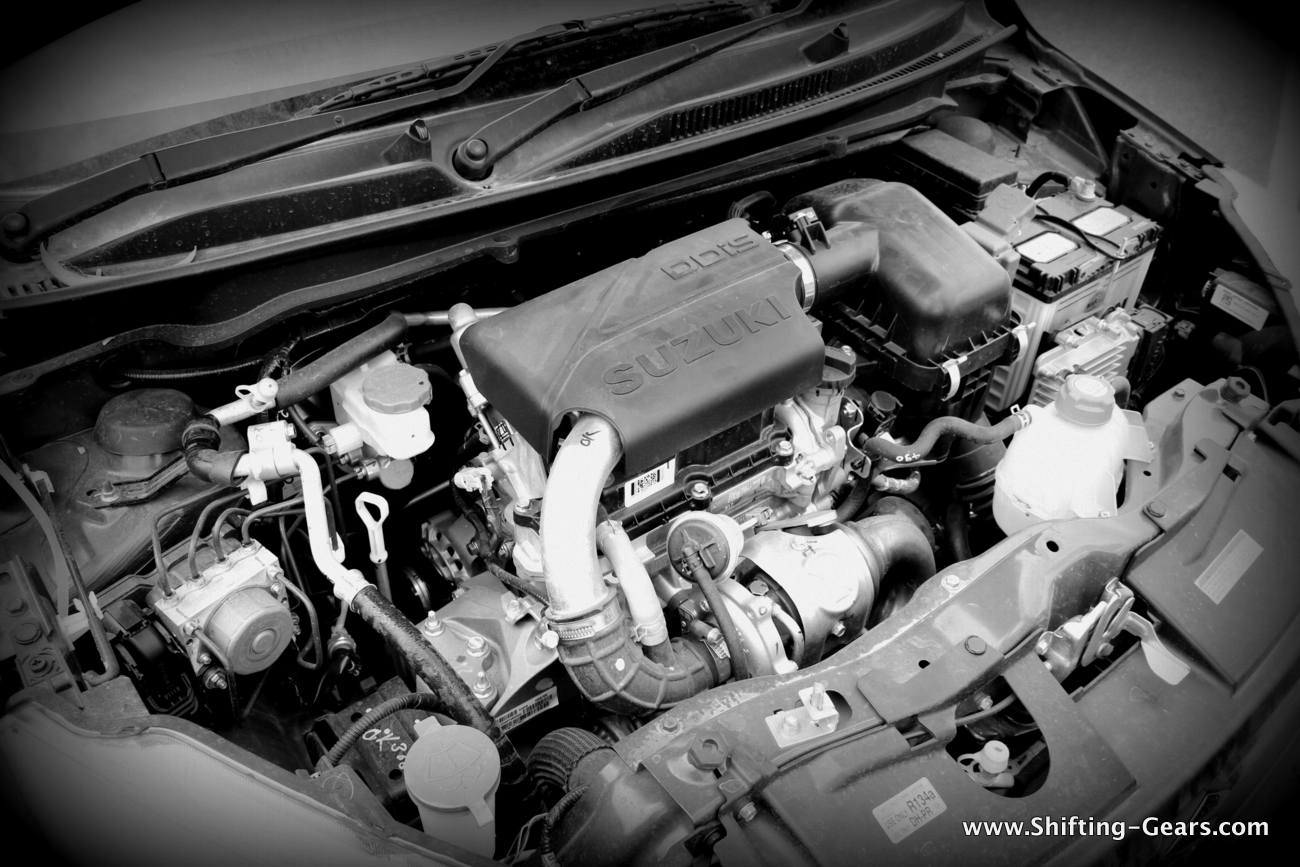